Within a contest project of the Creative Union “Reserve” the gold for victories is almost literally represented – it turns into a shiny ingot enclosed into orderly grate of bright stone. It is however just one of the many themes that the architecture of the building contains.

At the end of July, the Creative Union “Reserve” was declared winner of the contest on the concept of the new Russian Olympic Committee building. Seven workshops took part in the contest (see projects of other participants here).

The new building is planned to be built in place of the old one, constructed for the 1980 Olympics – its low-rise block is now stretched along Novoluzhnetskiy proyezd, from the flyover of the Komsomolsky avenue towards the river. The new ROC building will take up the whole rectangular lot but will be taller than its predecessor: ten floors instead of four, the total area of 860 000 square feet. The building is planned to be paid for by an investor who will obtain half of the working premises, that is why it has been logically divided into two parts, which has determined at least two distinctive features. First – its plan: the Committee prefers a corridor-office-type arrangement, so according to the design assignment the architects have divided the spaces into rather spacious rooms – 193 sq. ft. each; and the plan of investor’s area has been inspired by the popular “open space”. Yet the design assignment required the committee and the investor’s blocks “equal but separate”, on the one hand, and on the other – combined in “a single building with a common space”. Having justly estimated the task as contradictive (see author’s description), the architects, however, fulfilled it quite successfully. 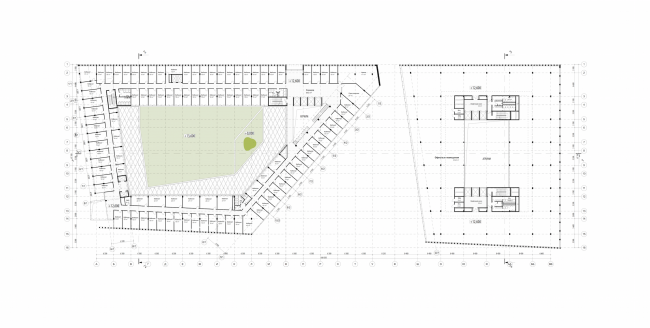 Rusian Olympic Committee HQ. Plan of the 4th floor. The committee offices on the left, the future investor's open space on the right © "Reserve"

Both blocks are inscribed into the contours of a simple figure, close to a parallelepiped, and are divided with a spacious yard area, the wide funnel-shaped golden opening of which faces the Moskva river and the MSU high-rise on Sparrow Hills – the authors have thoroughly designed the asymmetrically slanted walls to achieve the best possible panorama. The yard both divides and unites the blocks, and coherence and unity of the volume altogether are emphasized by the grid signboard-roof: five rings built in its surface will light up at night. The module of the thin white net of the facades is expressly simple: the checks on the end walls are square, and vertically split in half on the longtitudinal walls – the result is rather fractionary, but even and calm, as a tribute to classical modernism and hence – to the memory of the old building. Strangely enough, the clear floor by floor check looks fresh in its simplicity: in recent years it has become popular in Moscow to hide the sizes of the buildings combining two or three floors in one, but here it is unexpectedly straight forward, like a notebook sheet. Although there is still one optical trick: the vertical division of checks in two parts makes our eyes see as if there are twice as many module pitches, and that the “parallelepiped” of the building is longer and thinner than it really is. All of this together forms a simple and airy image with several ideas. The first one is easy and clear to make out: we see an ingot of Olympic gold enclosed in a structured material of white facades like an amethyst cluster inside a lime stone carcass. Simple and practical from the outside, and intriguingly shining inside, revealing the preciousness of the content. The grate of the facades can be seen as a visual expression of the administrative work of the committee: papers, offices, accounting, a routine but strictly organized process. The golden yard cut out in the checked volume reflects its essence and the goal alluding to the winners’ victories. It should be, however, mentioned that it would not be Vladimir Plotkin, if the gold of the yard looked like a melted ingot – its shine is composed of separate lamellas beaded on the vertical axes and turned like figuratively drawn medal-flags at different angles. In close-up it forms a tridimensional hatch, a pictural image of plastic gold: light, glitter and shades; and from afar, for example if you look through binoculars from the View point, it will fuse into a golden cave. But the building is meant to be transparent, permeable, with practically no weight; like a complex but rationally planned dimentional drawing – this structural lightness, that makes the building look almost like molecular structure with scarce inclusions of mass, is one of Vladimir Plotkin’s signature characteristics. The second theme is contextual. Looking forward along Novoluzhnetskiy proyezd one can see the high-rise of the Presidium of the Academy of Sciences constructed by Yuriy Platonov in the 70s: a white tower with a golden top, clearly noticeable in the landscape. The building of ROC in the project of Vladimir Plotkin echoes to the Academy, enters into a dialog creating, according to the authors’ words, “a golden massif of similar sizes”, in a way, however, alternative – a horizontal instead of a vertical, a cavity instead of a volume. A longitudinal, reasonable architectural axis has appeared between the buildings – and the distance between them is a long one.

And finally the triangular yard between the blocks not only plays a role of a spectacular frame for viewing the Sparrow Hills, but also creates another perpendicular axis, parallel to the Komsomolsky avenue: a narrow gorge formed by the funnel-shaped yard on the North-East will become a passway towards the territory that will soon become a new construction site in the place of the Institute of Helium – so the new district will gain access to the Luzhniki Stadium. “The Golden Square” is to become a public urban space: the authors have planned to place shops and cafes on the ground floor. More than that, appealing to the open, uniting role of the Olympic movement itself, the architects have suggested connecting the two blocks with a “footpath”  made up of a line of rampants: it runs along the street façade on the ground floor of the investor’s part, turns right, crosses the yard and gradually rising continues along the ROC facades on the first floor level and winds up as a small platform  – a kind of viewing point facing the Luzhniki Stadium. The footpath is the author’s plot addition, it can become a way for a tour devoted to the committee activity. The viewing platform on the end façade is echoed by the golden exedra – a setback as a pendant to a projection, it emphasizes once again that any cut-out from the grate volume reveals a golden filling. The North-West façade – is the second main one. It is the nearest entrance to a subway station and it leads into the ROC meeting room. It is also a place where light accents and elegant details have been collected: the platform, the exedra and four thin rainbow-colored columns. It means that the best view of the building – from the Komsomolsky avenue and Novoluzhnetskiy proyezd – allows to see the two main facades in one time.

On the inside, the blocks are filled with atriums – however, it has not yet been decided whether they should be glazed or stay open. The central part of the ROC block is occupied by a large congress hall – its roof is planned to be all green with a large inner yard placed on it; a rhombic atrium is arranged behind the stage, and then comes a triangular one with lifts. The multilayered space with multiple scales is filled with hanging bridges; on the other hand, the atrium of the investor’s part is furnished with a wide entrance lobby facing the “Golden Square” and a stairs – not exactly spiral but it does turn twisting the yard around itself. The atriums of the blocks, same as the laconic grate of the facades, remind of the old ROC building: a simple parallelepiped with two square yards – and consequently build up another level of meanings, putting the building not only into the architectural, but also into the historical context. However, if we compare idea of “Reserve” with the plain ordered yards of the older building it will become clear, that even though modern architecture has inherited the inevitable atriums from the 70s modernism, the direction of the interior plastic has become much more complex, emotional and flexible. This inner spatial layer of the project is filled with architectural scenography, starting from the excursion path up to the clerks path in the multilayer yards. In contrast with the graphic facades and picturesque gold, it is plastic and nimble: for someone moving around the inner area of the blocks with their bridges, stairs and voids inside - here vertical and there spacious, alternating all kinds of angles – it must seem dynamic and theatrical. Yet the described layering of architectural ideas and impressions is supposed to be implemented by modest means. “Realizing the economic difficulties of our time we have scrutinized the topic of imports phase-out, - sais Vladimir Plotkin, - in particular, we have found a number of Russian manufacturers of stone that could be suitable for façade cladding”.

As a result, the project fits the context exactly, and this most globally speaking: from the economic context, with consideration of the crisis, to historic and urban contexts, appealing to the former ROC building of the 70s, to the Presidium of Yuriy Platonov’s Academy, and up to the very main context, more specifically – the building’s office function: the Olympic movement is reminded by the almost tangible gold of victories hanging like flags in front of the entrance; but there are some more abstract allusions, such as the public, uniting, peace-bringing role of the movement. The main “golden” Olympic theme – tricky in itself by its obviousness – has been brought to the edge plastic purity and lightness where its clarity is not frightening, but joyous, and the whole building becomes its own signboard when you look at it from afar. If the construction is successful, then in a couple of years standing on the viewing point one could say: there is the Academy, and here, on the right from the Big Sporting Arena, shines the Olympic Committee. It could be a nice company.