The state-of-the-art multifunctional gym was designed for the World Championship 2018 and "Spartak" football team. Keeping in mind just who Spartacus was, the architects endowed the gym's glass facade with a resemblance to an antique temple, almost the Parthenon.

Next to the new stadium of "Spartak" football team, in the northeast part of "Tushino" airfield situated in the district of Pokroskoe-Streshnevo, it is planned to build a multifunctional gym complex for 12 thousand spectators. The stadium that got a name of "Otkrytie Arena" ("Opening Arena" or "Discovery Arena") opened its doors in August 2014. Its scaly facades, designed in the colors of this football club, were developed by the British bureau Dexter Moren Associates (MAKE ACTIVE) based on the previous project of this arena prepared by AECOM. This same year, the metro station under the same name of "Spartak" was opened - its construction having been halted and put in a state of suspended animation as early as back in the 1975. The construction of the multifunctional gym is supposed to become the final step in preparing this venue for the Soccer World Championship 2018.

The considerable territory allotted for the objects of the multifunctional complex of "Spartak" is limited on the south and west by the Moskva River; its northern boundary is fixed by the Volokolamsk Highway; the eastern one - by the valley of the Khimki River. Rather close to the land site, there are residential houses and infrastructure objects. It is expected that once the construction work is completed the complex will become the "gravity center" of this entire area, a focal point of the public infrastructure and a powerful transport center. For this reason, the new yet-incomplete project automatically assumes all the functions - even those that were left unprovided for in the original project. Besides the extra football field, it must also become a concert hall, and a venue for organizing other public events and activities. Located closer to the metro station - and thus significantly obscuring the view of the red-and-white volume of the Arena, the gym becomes in fact the main façade of the entire complex. Besides, it must be borne in mind that the very venue itself is situated in extremely reduced circumstances, squeezed between the metro line, the existing buildings, and pedestrian and automotive routes. These were the "givens" that Karen Saprichyan and Alexander Asadov had to work with designing this new sports facility. 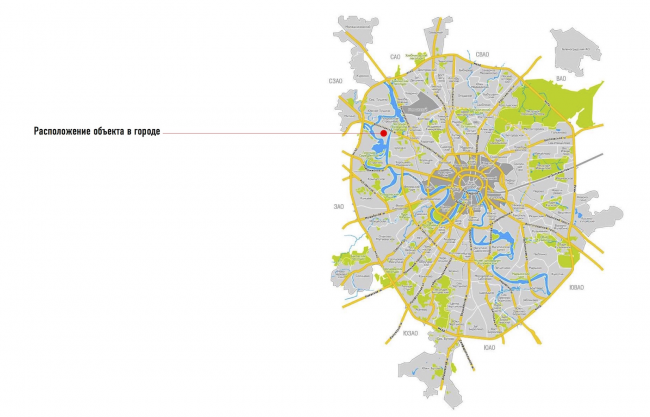 For the construction of the multifunctional gym as such, a land site with an area of some 1.34 hectares was allotted to the southwest of the existing stadium. As an offset to its rounded neighbor, the architects drew a volume of a rectangular plan, its elongated facet turned in the direction of the metro. The grand entrance to the building is also situated on this side. The covered five-story high arena with a tall "cap" of a roof was originally designed by the authors as being even brighter and more colorful than the stadium itself. As Karen Saprichyan shared, they wanted to cover the entire building with an amorphous "shell" or "casing" looking like a poncho or maybe a Russian scarf with national folk ornaments. According to the authors, such a solution was really the best option for "Spartak" that has always enjoyed a reputation for being Russia's "national" team. However, the customer asked the architects to consider the perforated-façade solution to be a "reserve" option, the main option being a contemporary glass façade.

Meeting their customer halfway, the architects still endowed the new glass solution with an extra meaning, again, referring to Spartacus, but this time literally - to the name of the historical rebel gladiator, the name that the team has proudly born since 1935. The concept based upon evoking associations with the Ancient Rome made the architects give the parallelepiped of the roofed stadium a resemblance with a peripteral antique temple: the glass surface of the hang-on façade curves in equal-size wave undulations, their outstanding parts covered by slender vertical flutes looking very much like those of the antique columns. The concave fragments, on the other hand, are smooth and transparent, looking a bit like the spaces between the columns (even though there are no columns as such here, as we know). It looks as though the glass blanket outlines the contours of the Dorian colonnade turning into a memory mould hovering in the air - the columns have neither bases nor capitals. At night, all these peculiarities of the façade will be enhanced by dynamic backlighting. Multifunctional complex of "Spartak" football stadium. Fragment of the cold contour of the facade © GrandProjectCity Multifunctional complex of "Spartak" football stadium. Fastening units of the cold contour of the facade © GrandProjectCity

The upper part of the building - the attic of the temple devoid of frontons - is significantly shifted inside of it and is not to be seen from any point. The architects covered it with bas-reliefs depicting the scenes of sport competitions and ancient myths. By doing it, the architect and artist Karen Saprichyan not only turned the building into a "peripteral sculpture" but also endowed it with a fair share of monumental art - staying true both to the ideas of gesamkunstwerk and rules of antiquity. But then again, one must admit that the "entablement" will only be seen well from a distance - as one approaches the building, the reliefs will get lost in the glass waves - but one will still be able to take a walk underneath them along the glass walls of the significantly sunken-in ground floor. 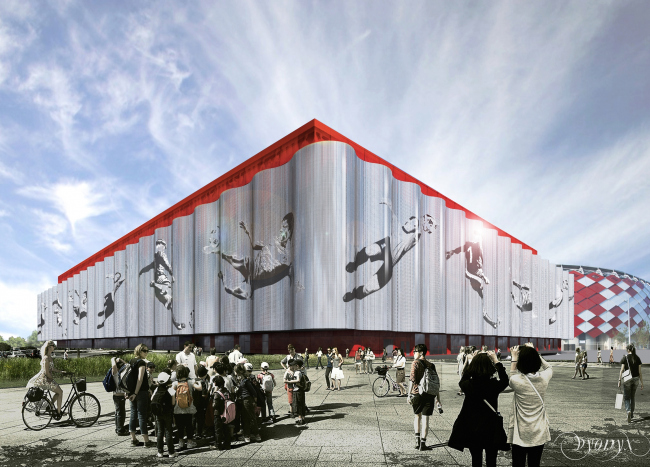 As far as the "fifth facade" - the top view - is concerned, here the digression from the historical prototype is particularly evident. The simple and modern flat roof displays numerous pyramids of the lampposts with a total opening area of 384 square meters. They occupy the entire space above the football field so densely that they easily provide sufficient light and ventilation to the inside.

But, however interesting and intricate the outward appearance of the building is, its "content" is still more important. The unbelievably sophisticated structures, wide-span steel pillars, and the cobweb of trusses - all contribute to the creation of multifunctional universal space. As was already said, the scope of its operation will not be limited to soccer games and soccer practice. Laying special coverage on the field, one will be able to use it for public functions, concerts, performances, and even trade shows. The construction of the roof is designed to bear heavy equipment and decorations of any complexity. For conducting spectacular events, the upper girders and trusses are designed to carry 120 winches with a carrying capacity of two tons each - which will provide an opportunity to organize such extraordinary shows as "Circus Du Soleil". In 2018, it is also planned to organize a press center in the designed building. Besides the field itself and the four spectator stalls, at each floor along the perimeter of the building, there are all the necessary premises - from lobbies to cafes on the first floor to the management offices and the mass media zone and a filming room on the fourth. The cloakroom, together with the lockers for sports equipment, is situated on the underground level which leaves more room for the grand foyer upstairs. On either side of the multifunctional gym, there are high-ceilinged above-ground garages that echo the style and the image of the central volume. The complex is surrounded by loops of roads, pavements, spots of green lawns, young trees, streetlights, and inclusions of outdoor furniture.
Text by: Alexander Asadov, Karen Saprichyan, Alla Pavlikova
Translated by Anton Mizonov 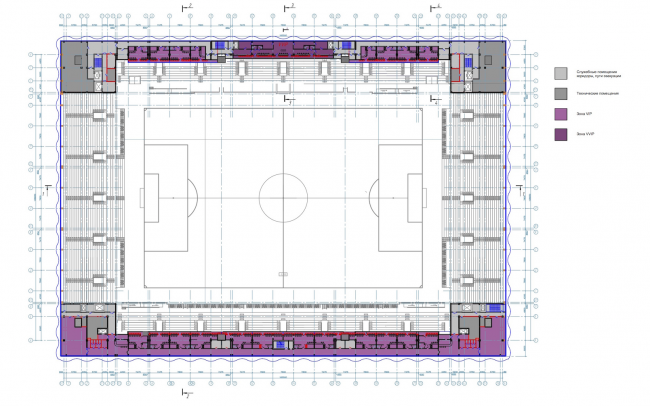