Project of the city block in microdistrict "Uzhny" in Domodedovo combines free arrangement of an English garden where picturesque parkways stretch along the banks of small rivers – and in an equal measure some classical and popular form of round houses. So there appears a unique space for living – it focuses on nature, but it is modest due to inner yards

Exposition of «Archkatalog», this year devoted to residential city blocks, will consist of stands and models placed in a row on a long podium. Some blocks there are noted for special, almost sculptural plastic of the architectural idea. One of them is the project presented by architects of A. Asadov’s studio.

The city block consists of round and ring-like houses freely placed on 26ha territory. To someone this composition will remind of multiplied Roman amphitheaters, someone will think of pictures of lunar craters. Authors insist that they were inspired by a picture of circles running on water surface. This bucolic association - rare drops of summer rain drawing circles on a smooth surface of some forest lake - is responds to the ecological orientation of the project.

Today the site given for the city block is a field located to the south from Domodedovo, between the old and the new line of Kashirski highway (they are quite far apart here). To the West now there are forests, meadows and Redkino village, soon however they will be built up. To the east there are continuous country sites by Vostryakovo platform.

Architects decided to transform all the territory into park zone. Most part of parking places (proportion of apartments and garages is 1:1) will be concentrated in the 3 levels of garages extended along the western border of the site, they will protect apartment buildings from noise of “Don” route – Kashirskoe highway. Additional car places are located in the area between the inner yards.

Through the city block, bending, there is streaming an artificial small river with four "inflows". Its course drawn by architects marks the lines of main transport axes – these are the five parkways – one central and four its branches. A core of each parkway is the small river, on its banks there are green small gardens, and their sides there are one-way roads. The structure is very branchy, and this makes the lay-out open and excludes traffic jam on both directions. Curves of the rivers make roads curve, this is why the plan of ensemble becomes similar to a picturesque English park. Foot paths of the block are on the opposite, absolutely straight, but there are many of them and they often cross each other. And this has practical idea, it makes a way shorter, including the way to a garage.

Overgrown natural pond in the north-east part of territory will be accomplished, around there will be a landscape park with a few private houses saved over the pond. This park will be continue the "river" inner parkways, it is designed as a main leisure area for residents.

Geometrically correct round form of the buildings takes us from park bucolic sphere back to classical town-planning. A round temple and a round tower – classical ideas as well as a round courtyard. But a ring-shaped house is more likely to be modern. In Moscow there are the two famous houses-rings in diameter of 180 m constructed in the beginning of 1970 of standard 9storey sections in Matveevsky and on the bank of Setun river. In 2006, PIK company announced a grandiose mixed-use complex "Coliseum" in Dolgoprudny by architect Andrey Chernihov, its diameter 140m.

In microdistrict of architects of A.Asadov’s there are five round towers, diameter 26 m and height 50m. And there are 10 ring-shaped houses (on the average of 30m height), they are the basis of the project. Houses will differ in color of facades and number of floors, in diameter and arrangement of ways into the yard: somewhere there will be arches, breaks along the full height of a construction. Instead of ordinary flat roofs residents of upper storeys will have open terraces with green lawns. And on ground floors there will be grocery stores, pharmacy, youth clubs and cafes.

However the key feature of ring-shaped houses is the closed inner yards. This is a way for creation of community of "neighbors" lost with arrival of standard dormitory suburbs where a person lives only “around strangers”. Architects have a fine gift for the future residents of this city block - spacious green yards with children playgrounds and sports fields. All together and close. Such house will give a new sound for expression “one’s own circle”, because there will a whole house inside the “own circle”.

There remains a question – why there is no such city block yet? The answer is in technical and economic parameters of the city-block: for 3 960 people there are 198 000 sq.m.; so final population density is: 154 person on 1ha. Each person will have 50 sq.m. These 26 ha can be more profitable if one will not try to create a new world of round houses. Though, townhouses are more common now in Russia, but sometime before few believed it would be possible. We hope this project will not vanish like circles on water but will be realized and will live no less than «fort Bayard». 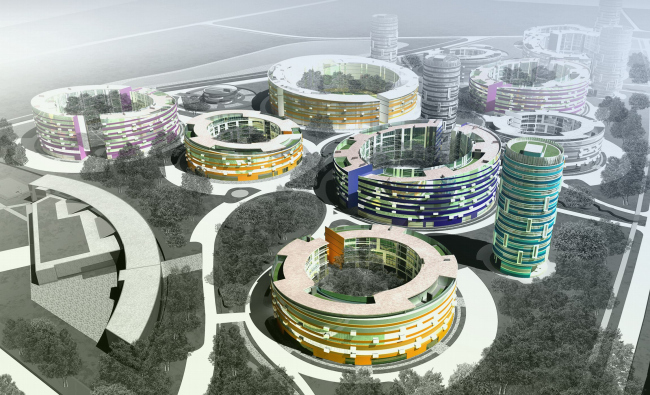 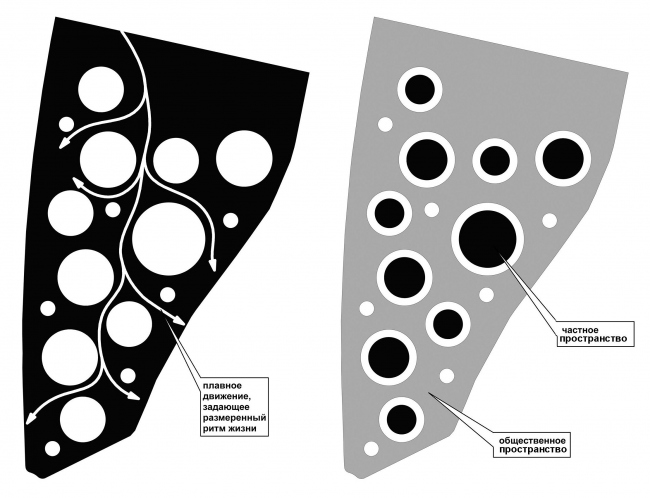 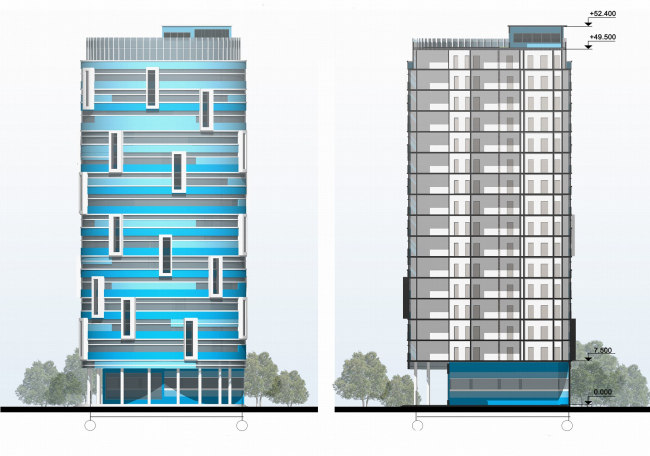