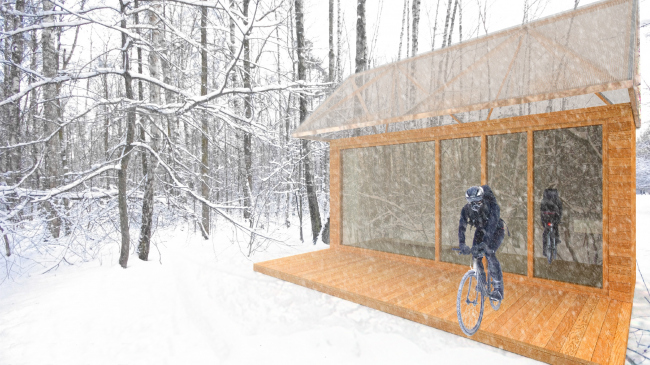 Last spring, within the framework of the key exposition of "Arch Moscow" named "Kvartaly" ("Quarters"), Totan Kuzembaev Bureau presented an interesting stand that seemed to us at that point to be conceptual and in some ways even ironic: a curious "anti-quarter" of sorts. Its idea was all about dissecting all the vistas of this boundless country into 5x5 kilometer squares placing inside each of such squares a capsule where "a lone hiker can take a test and spend the night". The grid of the live modules was just as attractive as unrealistic and utopian, clearly resembling the set-up of some sci-fi novel and not the real prospect of Russian life.

"Dividing Russia into such fields is not at all utopian - comments Olzhas Kuzembaev on the regular mode of using his modular houses showcased at "Arch Moscow" - this idea was discussed as early as in the 1920's together with the so-called GOELRO plan, the first-ever Soviet plan for national economic recovery and development; it was at that time that the cadastral development scenario was developed. Over the last year, the Ministry of Economic Development and Trade promoted, in many subjects of the Russian Federation, the adoption of laws about providing the land to people for free, and our plan, though conditionally, reflects this process". Well, a great idea - any side observer will tell you. However, it turned out that the modular house is quite realistic and its first sample/prototype has already been built in Kuzembaev studio and will soon be offered - no, not for the tired hikers - will be offered for sale, and, for all intents and purposes, pretty soon, too.

As for the historical background of the project, it runs as follows. Two years ago, Moscow Architects Union launched a scholarship program for the young architects who were offered to do a research in environmentally friendly and energy-efficient construction and ultimately come up with an innovation project - although the task was formulated in a general way, without any particular specifications. One of the participants of the program whose portfolio got short-listed was Olzhas Kuzembaev who ultimately proposed a version of the modular mini-house of his own. After that, the idea was developed and turned into a real project in Totan Kuzembaev Studio where Olzhas is now working alongside his father.

The resulting house, or, to be more exact, residential module named "InstaShell" is remarkably compact and easy to assemble. Six meters long, a little over two meters wide, and two and a half meters high on the inside - the dimensions are made to exactly fit the parameters of a standard transport container - which provides an opportunity to transport this module by truck, by train, or by sea, the extra sturdiness of its construction allowing for hundreds and hundreds of relocations. The module comes factory-made; it is expected that one single person armed with a small crane will be able to assemble it on a basement that is possible to place on the terrain of any complexity: "be that a virgin forest or a mountain slope", as the author comments. In any case, neither heavy machinery nor construction crew is needed. 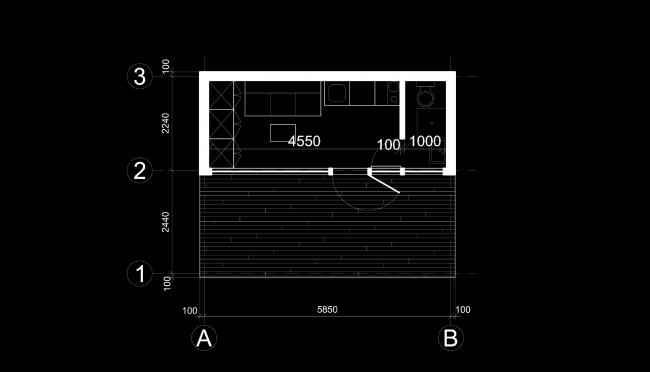 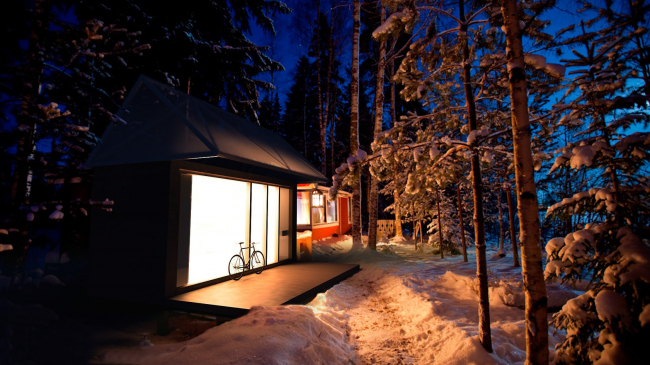 The architecture of the module is extremely simple: this is a parallelepiped, one of whose longitudinal walls is almost completely made of glass and serves as "the main facade" of sorts. Yet the most interesting element of the house is the "cap" of the transformer roof that can be raised or lowered by electricity or by hand-operated gear. When folded, it functions as a protective casing, something like rolling shutters, thanks to which it is possible to preserve the house long-term - the module, like a turtle, hides in its shell, providing for itself a secure protection from the sunlight, rain, and other elements, as well as vandals or aggressive wild animals. And in the fine weather, welcoming its guests, it opens its "shutter" just like a beetle opens its chitinous sheaths. The cap will be made from recycled corrugated metal sheets: on the one hand, they are hard to break or to bite through, and, on the other hand, the use of such material, according to the author, Olzhas Kuzembaev, "increases the ecological responsibility of the project".

The cap is interesting not only because of the security of its protective properties but also because of its transformation possibilities: if you raise it but partly, for example, at 45 degrees, it forms, in front of the glass wall, a small-sized marquee, and the house's silhouette takes on a semblance of a gable roof that is as winning as it is convenient: the water and snow will not accumulate on the pitches of the roof. And, when it is completely open, the shell makes an open air roof terrace, at the same time protected from the wind and the rain. 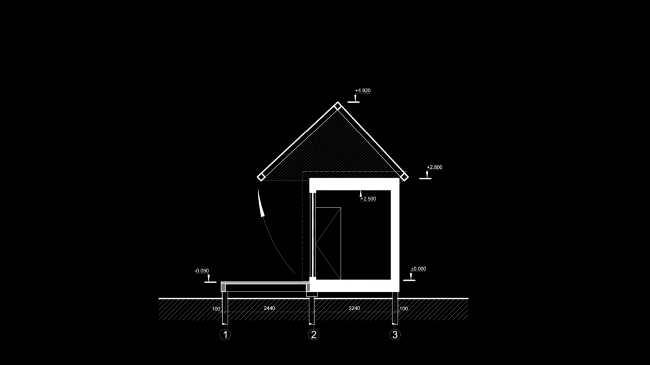 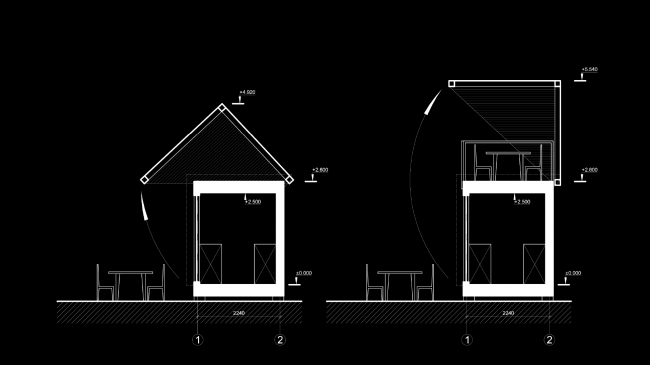 The standard residential module with a floor deck of small wooden terrace before the entrance includes but one room and a bathroom and is designed, rather, for temporary residence - during the fishing or hunting season, for example. As a permanent residence, the double version that is 12 meters long can be used. It has quite enough room for all the spaces and objects necessary for living. However, the authors position the module as quite a self-sufficient thing, proposing to use it not only as a temporary residence but also as a shop or a cafe - with little tables standing around it and on the roof as well, accessed by a steep roof. Inside of it, one can organize even a small office or a small gym or a rehearsal studio. A few separate capsules can be scattered around the forest: the bedroom can be placed in a thicket, the dining room - on a sunlit lawn, and the bathhouse - next to a river. The authors propose the idea that the people who will live in such houses will move between them by the most eco-friendly type of transport - the bicycle. The video demonstrates logic of the mini-house's working process:


The house is designed to be fully self-supported, it consumes very little power and can virtually take care of itself, the authors proposing, just like with the module function case, to combine various options of alternative energy sources, from wind-powered generators and solar batteries to the regular wood furnace.

This Olzhas Kuzembaev project definitely belongs to the genre of compact transformable mini-modules that hitherto was presented in Russia by the board quick-mount dacha houses, kiosks, and the ubiquitous makeshift barracks that are really convenient to place back-to-back at the construction sites - all of the above bored the people to death, probably, still in the soviet era. So, it is only in the recent years that the Russian architects started designing various modern options of mini-houses. Some of them are unique and original, some claim the status of a fully-edged family residence; there are also houses that are into the possibility of transforming per se. What makes the Kuzembaev project different? Probably, the fact that it combines a few small-sized prototypes all rolled into one: a barrack, a kiosk, and a cabin in the woods with a slight "luxury" twist to it that is still quite discernible thanks to the glass wall - it turns out that all this can be squeezed into one module with a whole bunch of operation modes. As a matter of fact, it really thrills me imagining the Taiga or some large forest "tamed" with the help of such autonomous modules - but still, the most original idea of their area of employment is turning then into offices.

Currently, the first sample of the mini-house is virtually complete. For the time being, it will be an exhibition specimen, but further on down the line everybody will be able to afford to buy the module fitting his it her needs in order to broaden the range of his or her notions of the houses that this life can be lived in.
Text by: Alla Pavlikova
Translated by Anton Mizonov 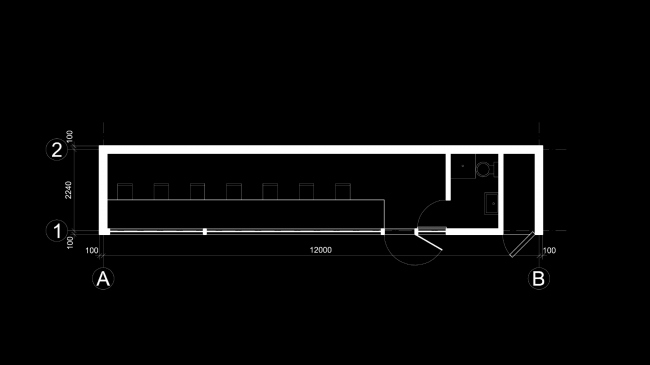