The house at the Chapaeva Street presents a dramatized intervention of the northern “Art Nouveau” into the mottled context of the former industrial park of Saint Petersburg's Petrograd Side. 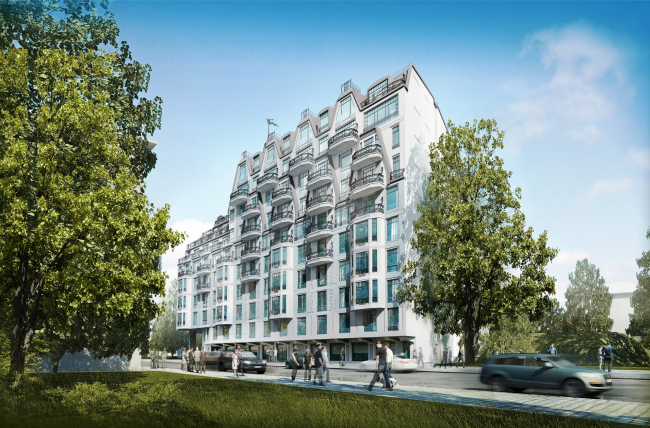 The ten-story residential house is now being built on the odd-numbered side of the Chapaeva street in the east side of the Petrograd Island (more frequently referred to as "Petrograd Side"). This place is a twenty minutes' walk away from the Petropavlovsk Fortress, and a ten minutes' walk away from the Kamennoostrovsky Avenue that was so upmarket in the early XX century. On its eastern end, however, closer to the Bolshaya Nevka River, the "upmarket" status as early as a hundred years ago gave way to the red-brick factory buildings, though still romantic-looking from today's standpoint - directly across from the house that is now being built upon the project by Sergey Oreshkin, there are buildings of the former cotton-spinning factory; besides, there used to be a "piano factory" nearby. The factories were grouped, probably, for technical reasons, close to the river, while the odd-numbered side of the Chapaeva Street remains - which is so unlike Saint-Petersburg - still "crumbly", as Sergey Oreshkin aptly described it: with a punctured line of houses intercepted by an odd tree or two. Nearby, there are: a lyceum, a bomb-shelter, an apartment house, and a sport ground. Still, though, the task was not to rob the neighboring houses of the appropriate insolation, as well as make the image of the new building match the historically formed environment.

Which Sergey Oreshkin duly did, "pulling" the romantic image of a "castle" house executed in the "Art Nouveau" style from the Kamennoostrovsky Avenue to this street, to the once semi-industrial and now office and residential eastern part of the Petrograd Side.

The two sections of the house are joined in a "T"-shaped fashion, the asymmetric horizontal stroke stretching along the street's red line, and the vertical stroke going into the yard, deeper into the trapeze-shaped land plot. The house is built according to the up-to-date standards: the reinforced-concrete framework, double skin facade ventilation, an underground parking garage, and the public functions on the first floor. The outward appearance of the house is also very much like a theater decoration where the stone, the light-hued stucco, the thin blacked-out window sashes, the cast-iron railings and even the grilles for mounting the air-conditioning units - everything plays into one single story, very romantic, according to the author's confession. Indeed, the resulting image of the house, on the one hand, brings up a steady association with the northern "Art Nouveau" style, and, on the other hand, the modernist style of Saint Petersburg's indigenous tenement houses is more austere and reserved, while the scale of the less-reserved villas of the Kamenny Island is significantly smaller - and one gets an impression that in this particular case the architect crossed the echoes of Saint Petersburg's Art Nouveau with the light fairy-tale ideas of the earlier times, namely, of the XIX century; at the back of one's mind now and then springs up some Neuschwanstein Castle once belonging to Ludwig of Bayern.

The volumes and the decoration of the main facade grow richer as one's glance goes up. For example, the first floor of the main facade recedes deeper inside the building, freeing the pavement for the pedestrians bad forming an open-air street gallery resting on cantilevers without any columns. The volume of the second floor is almost completely devoid of any plastic, and it is only on the level of the third floor and higher up that the building gets bay windows that unite the next three floors (from the third to the sixth) and cast the curved shadows downwards. The wall sections between the bay windows are slit by three large windows, the middle one of which is accentuated by striped relief that looks slightly like the Parisian blinds but are softened by a characteristic wavy line. 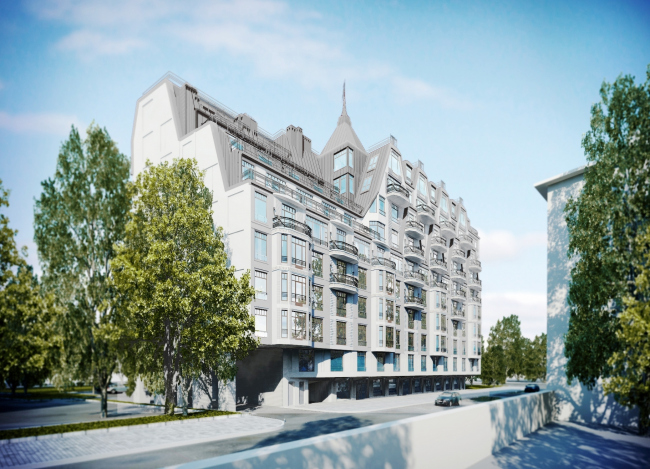 From the fifth floor and higher up, there starts a dance of wide balconies with openwork railings - a balcony is a very important thing both in architecture and in the history of Saint-Petersburg, rainy weather no object - the Kseshinskaya Mansion, with its historical balcony, is also a fifteen minutes' walk away; both in the beginning of the Chapaeva and on the Malaya Posadskaya streets, one can see such balconies on the bay windows. This motif was quite common in the early XX century, although, back in those days it showed through in a more reserved manner; as for this particular case, the balconies grow not only from the bay windows alone: descending one floor down, they then climb up to the very top and adorn the four penthouses placed under the sharp Dutch tongs.

The openwork grilles, echoed by the syncopated rhythm of the window frames successfully lighten the massive building, enticing the observer with a play supported by larger forms that also behave in a playful way: the tongs grow into the surface of the facade and now it is already hard to say where exactly their lines cross; although on top they alternate with the windows of a tall garret. The details of the sophisticated, and at places even decoratively fractured wave-shaped, composition look as if they came in motion still remembering their smooth shift, and the laws of balance and harmony.

The balconies grow into stepping terraces of the southern part of the house - which would have been quite impossible in the northern "Art Nouveau" houses but which is quite common in modern architecture - caused by the insolation requirements, the steps of the terraces beautifully fall into groups growing into the tower at the crossing of the two sections of the house. Built in this way, the tower is found not on the corner - which one might expect from a stylization - but in the middle of the building; it is cut out from its mass like its very core, almost like a donjon or a city tower - possibly this is the reason why this building shows the uncharacteristic of the northern modernist style dramatic and associative qualities - it is quite a tall order to combine all the requirements of today with the historical image, and the plastic play, lightness, and transparency not only add to the "positive attitude" of this house but also make the rules of the rigid stylistic rules more bendable. It looks as though we found the tenement house of the modernist epoch at the moment of its hesitation as to whether it should turn into a city hall or a castle or an Italian villa - a moment of meditative growing-up, speculation on its own image, arrested search for identity (a true homage to deconstruction, really).

The stepping composition that helps to conceal the considerable height and volume of the building has been used by Sergey Oreshkin many times already. In this particular case, it is interesting to note that the terrace facade is turned in the direction of the building that stands a bit at a distance, across the road, a building with a three-step facade, built more than a century ago, and enters into an active dialogue with it. In connection with the theme of the dialogue, we shall also note here that the side parts of the main facade resemble the firewalls of the neighboring buildings: they have no windows in them, and their only decoration is the completely unaccented cells of the austere rectangular niches that delicately structure the monotonous surfaces.

The architecture of the house is just as complex as the task that the author had to handle. Suffice it to say that the thin layer of our society that is at all interested in architecture split in two: those who deny stylization as such and those who think it to be the only possible design solution for the historical cities, especially for Saint Petersburg - the two standpoints that cancel each other out. One way or another, it is known that Sergey Oreshkin dares to work both with the must up-to-date shapes and with the historical stylizations - for example, as recently as in 2013 he designed for Petrograd Side a large residential complex on the embankment of the Karpovka River - also in the spirit of the early XX century architecture but a little more pristine and austere: closer to neo-classics or even art-deco. In both of the examples, we see a rather professional command of the style and proportions of the source matter - always with a fine-tuning adjustment to the realities of today letting us know that the house was built only recently. Still, though, the Art Nouveau projects are comparatively predictable, and for the buildings that have to do with any historical styles, the implementation is especially important, and the quality of every detail matters. But then again, we only have a short while to go - the building will probably soon be completed.

Recently, the house was awarded a prize at Urban Awards 2014 as "Best in-construction business class residential complex in Saint Petersburg". 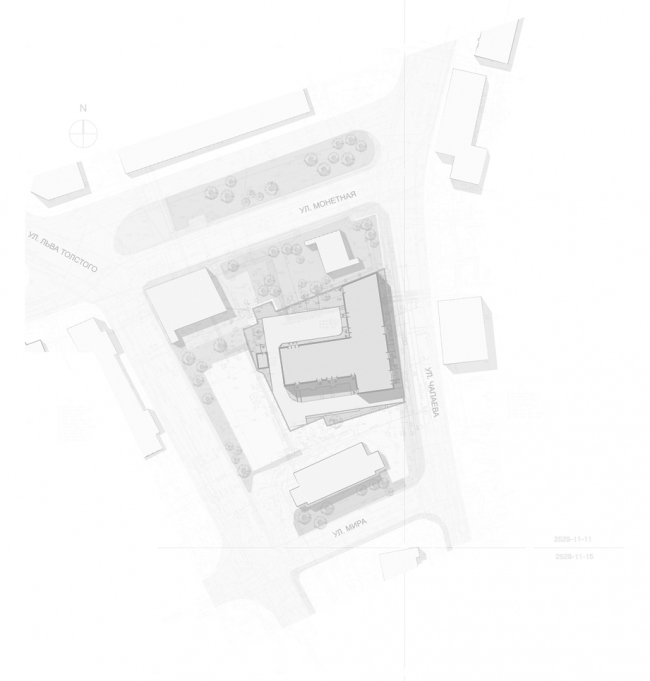