The studio of A. Asadov is finishing the project of a new residential accommodation on Nakhimovsky prospect. The architectural solution is derived directly from the specific of the site. Struggling with underground difficulties the architects had to lift the two buildings, connected by the two sylobates, on 8 meters over the ground turning the giant complex into a kind of fairy-tale “flying ship” with the two towers-mast and glass sails

We are used to the idea that the context, especially in Moscow, often has the greatest influence on the architecture. The secret of “context” architecture includes adjacent of a new building to the heights of the neighboring houses and their decoration, common for the district architecture and many other things that have been already described and talked about. But less attention is paid to such “low” and unseen for most people factor as underground communications – they may influence the architectural image of a future building no less then context limitations.

And that is just about the house on Nakhimovsky prospect, designed by the studio of A. Asadov. Its site (about 1 ha) is pressed between the 1storey building of former research institute and the wayside occupied by garages. Somewhere in the middle of the site there is a pipe line.

The first few months the architects spent trying to find out whether it would be possible to transfer the pipe line round the site. The pipe line has won, showing remarkable results on all specifications, this means that the cost of changing its location would be nearly of the entire building’s cost. So instead of one single base the architects decided to put the two towers on the site, configuration and size of which have been considered from objective factors. Well, the architects were able to decide on the height of the buildings on their own, after that was decided by the landscape-visual analysis specialists.

Between the areas of influence of underground communications and ground visual links, the creative thought of the architects felt its freedom. To compensate the lost single volume the towers were joint by the sylobate, it is lifted over the ground on 8 meters. It looks like a bridge that connects the two neighbor houses. In addition to it there are another two bridges-passes between the towers.

The project was designed in 2005 and that time it was intended for the cultural centre of republic Adjara. In the end of 2006 the relations between Russia and Georgia went bad – formally, the republic changed their mind to build the cultural business centre in Moscow – and the site was put up for auction. The auction was won by ZAO “Peresvet-Invest”, they suggested 20,1 million rubles (the sum that was added to 679 900 000 rub, the base cost fixed by the city authorities). They were given the right to build there not a cultural-business centre, but a residential-business complex with a kindergarten and an underground parking. In comparison with the previous project the total flooring of the future building has been enlarged and the number of storeys has been reduces. The developer was not allowed to build a construction higher than 27 storeys and more than 48,9 thousand square meters, 7,3 thousand square meters of which (90 apartments of 1-and 2-room) are left for the city.

The architects from A. Asadov’s studio continued the work over the project, or rather have started it reconstruction.
The change of functions and the cultural belonging of the developer have not influenced the volume-space and compositional solution suggested by the specifics of the site, but it influenced considerably the exterior of the complex. There is less futurism now, but more thoroughness. Glass and stone on the walls and the extended blocks changed over. Instead of stone towers, from which there used to extend shining crystals, now there is the “glass knight” in “stone armor”. This is the impression that appears when one looks onto the volumes of smoky gray glass, wrapped into perforated cover.

The light bridge-passes have enlarged and turned into inhabited “hanging gardens”. There are 2-level apartments, exterior walls of which will be done in the technology of double facade, and on flat roofs there will be a real lane with grass as well as on the roof of stylobate.

The distance between the towers is about 35 meters. In the low part of the bridges there will be 3-meter height iron-concrete beams as the main support elements. In order to prevent deformation where the beams rest on the .. bearing walls of the towers, the designers of the institute “Promstroiproekt” and the architects of the studio A. Asadov have created a unique system due to which the two buildings connected in the levels of stylobate and bridges will be as reliable as a single construction. So, the architects had a revenge for the underground force-major and so they proved that difficulties can be overwhelmed even if they have to think of and construct a “flying ship”. 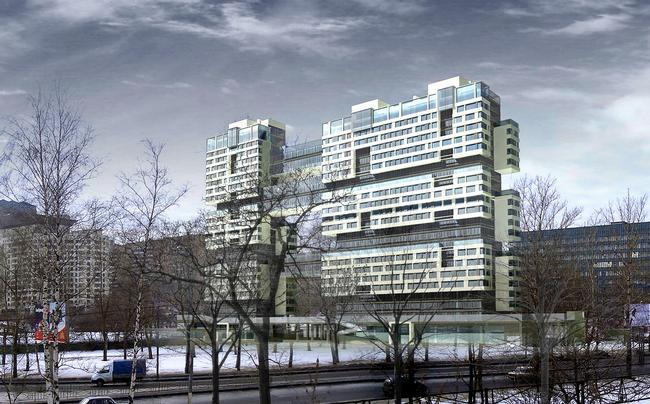 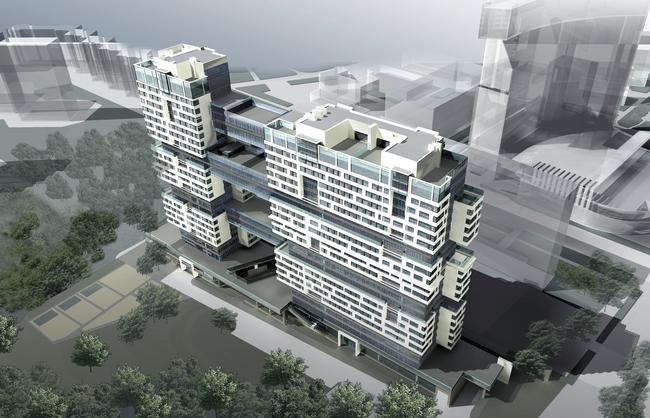 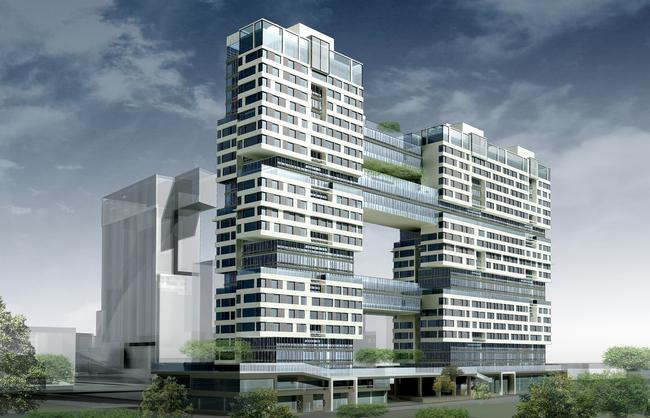 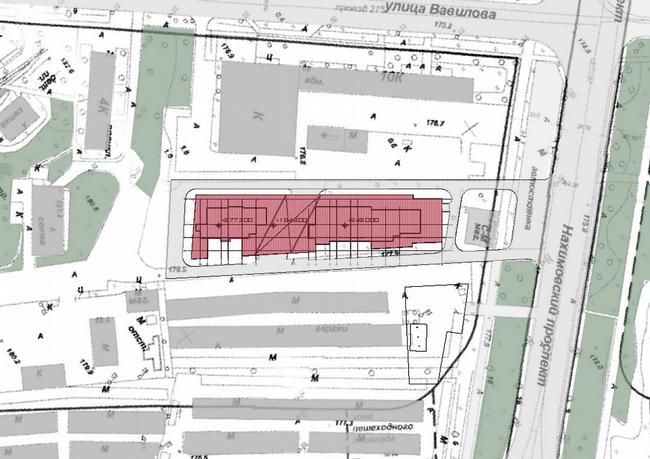 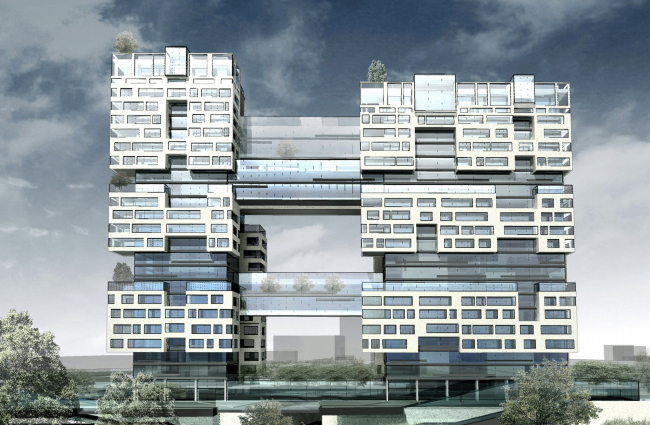 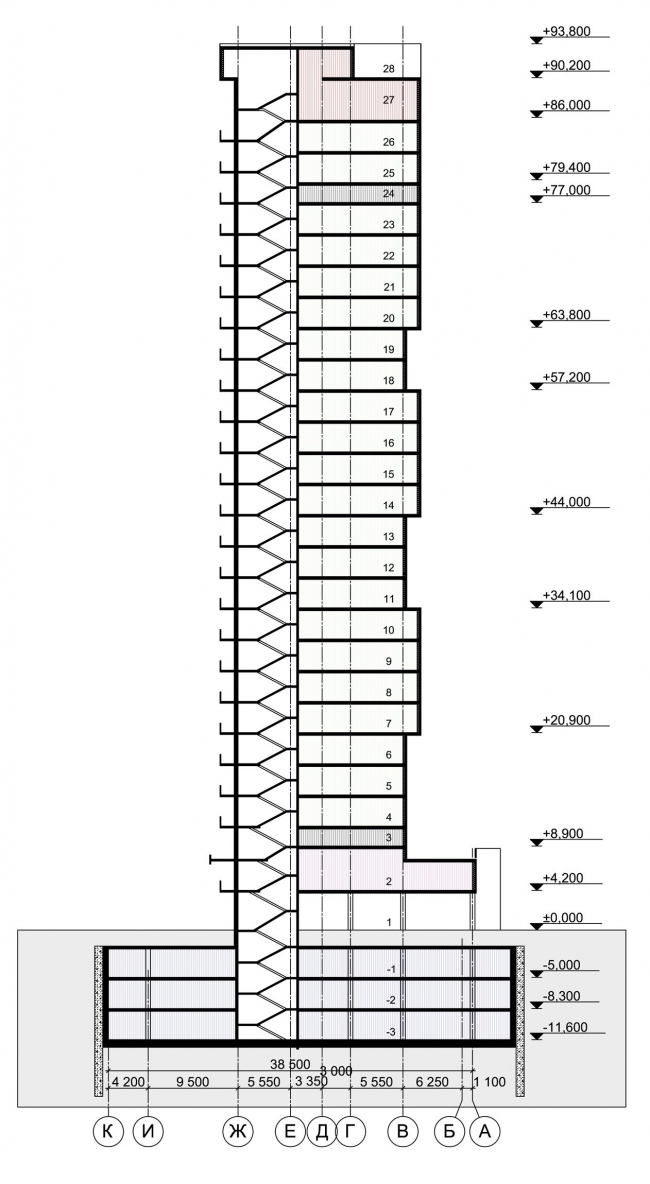