Budva is a small town at Adriatic Sea, one of the most popular health resorts in Montenegro. Like many other towns on the sea, it is situated in a wide bow-shaped harbor between the two sharp capes that stand towards the sea, like peninsulas. One of them, the western, is wholly occupied with the town’s historical centre: fortress of the 15th century. There are narrow streets, stone houses, tile roofs, and a cathedral of the 6th century with bell tower of the 19th century. The other cape-peninsula that closes the town from the eastern side is almost absolutely different – there are hills, forests and it is nearly wild. On the cliffed beach there are Papuan umbrellas of dry leaves, cold springs and even caves. Over all this it is planned to build new and modern part of the town: townhouses, house-tower with municipal apartments, hotel and casino. The client, Russian company “Slav-Inn”, held a closed architectural contest and one of the requirements was that the new residential tower would become the new symbol of the town leaving the bell-tower behind.

Taking part in the contest, Nikolay Lyzlov offered the two variants of architectural solutions. Their plans are alike: the western half of the cape-peninsula is being built up, in its north part will be townhouses, in south – hotel and casino, in the middle between them there will be the 30-levels tower – so high for Budva that it feels like using it as a light tower (and this is possible). There will be a tunnel lead to the sea, and on its roof there will be a helicopter landing site.

Difference between the two variants is formal and stylistic: as the architecture says, one of them is “strictly orthographic” and the other is “flexible and soft”.

The first variant makes remember of “dynamical cubistic compositions”, wooden exhibition pavilions and other experiments of Russian avant-garde of 1920’s up to project of the tower of III International. The 30-levels tower on the straight iron legs steps to the sea – almost Mukhin’s “Rabochi I Kolkhoznica” [Worker and Farmer woman]. The two consoles – one is long and plain at the bottom, and the other growing as the extension of the stepping “leg” in the upper part of the building – suggests an image of a highboard diving that was so popular in Soviet Union of 1920’s. Though here they certainly have function of a viewing platform. Directions of the two main supports – “stepping legs” – respond in the lines of the grating that surrounds the huge construction like scaffolding, clearly showing the idea’s structure. This tower looks best if made of wood – the carcass of crossing thin supports has a logical if inner motion and makes admire three-dimensional and transparent geometrical structure.

Townhouses in this variant will be partly earthed and squarely stick around the highest north hill, creating a kind of a stepped tower, Babylonians ziggurat. Ziggurat for people of Soviet period is a mausoleum; by the way, this shape was apply not only to Lenin’s mausoleum, but designed also for Sverdlov. So, the stepped houses are very much like a mausoleum especially in wooden model and the tower is like a tall tribune. Though much huger. It is true that the created image is openly unique and new among modern “tower” construction – even though its historical association is obvious.

In the second variant there are no “caves” and houses in contrast are high above the ground and are put onto piercing them through spiky supports. Here the carcass is not like wooden construction of 1920’s and is more like a huge iron-concrete cane plant. It is compactly planted around the core of the tower and bear open glass semi-ring with apartments.

And yet these two different have a common base – the “grating”, which lines either part or cross creating rhomb interlaces. The lines of the net are not only traditional supports and do not finish at the foundation of the supported volumes. Otherwise, they either surround the building like scaffolding, or piercing them, growing through the roofs. Displaying some transparent grand-construction like a theatrical mechanism in Meierkhold’s performances.

These projects reveal many considerations and analogies, they even seem overloaded with experiments. And they are hardly glamorous. This might be the reason why the contest wasn’t won. But it was an interesting experiment which tunes to the works of mentioned above master of avant-garde. 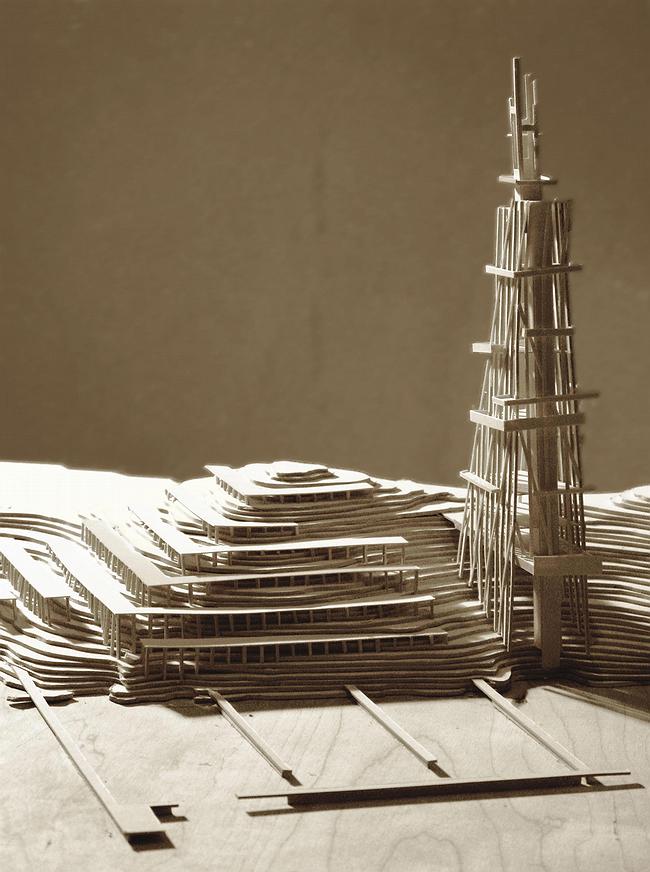 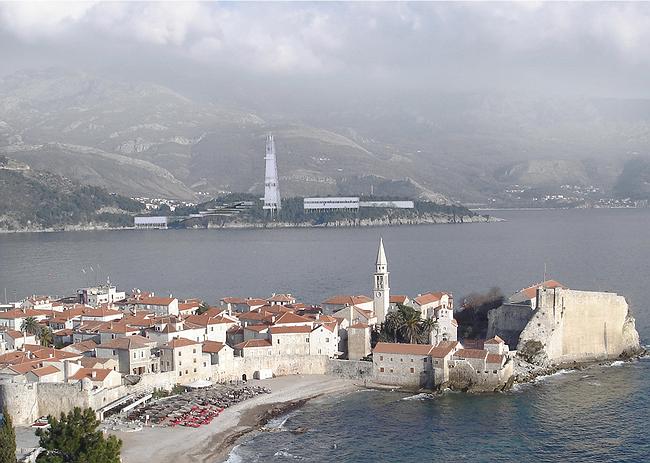 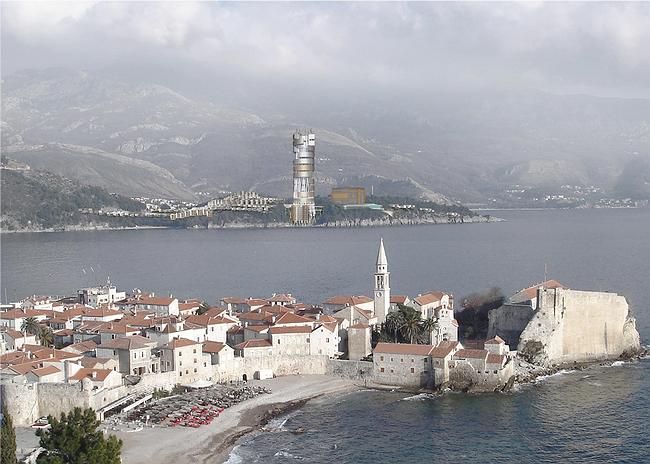 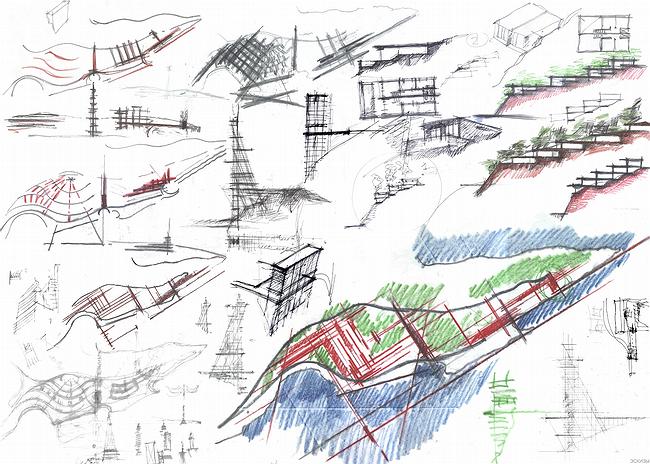 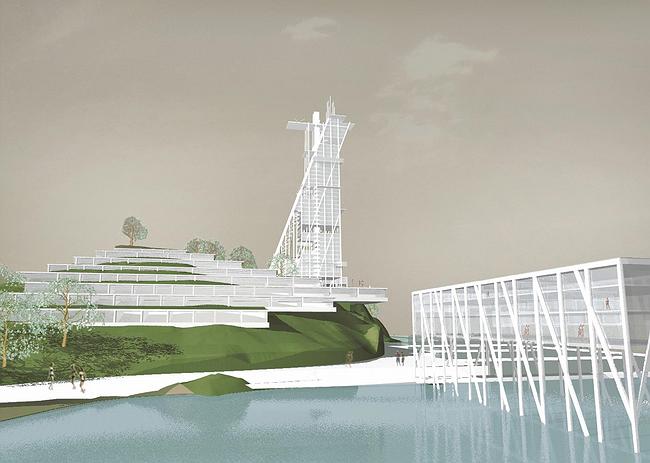 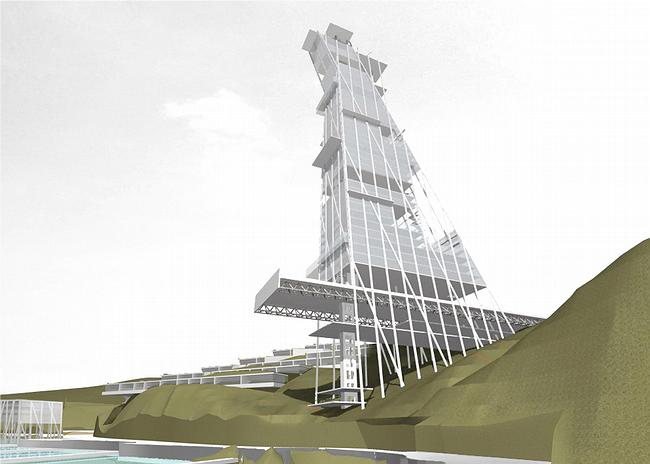 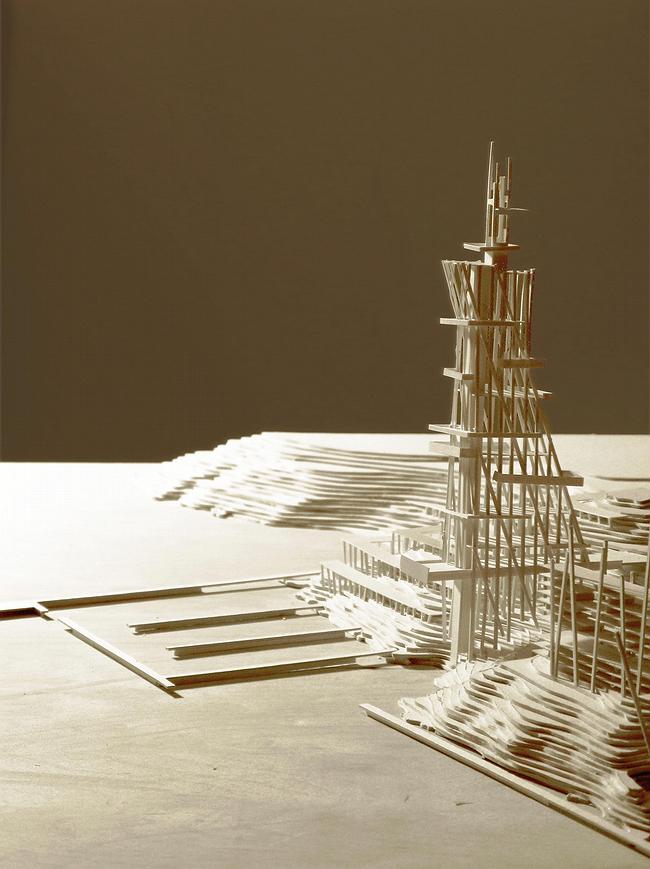 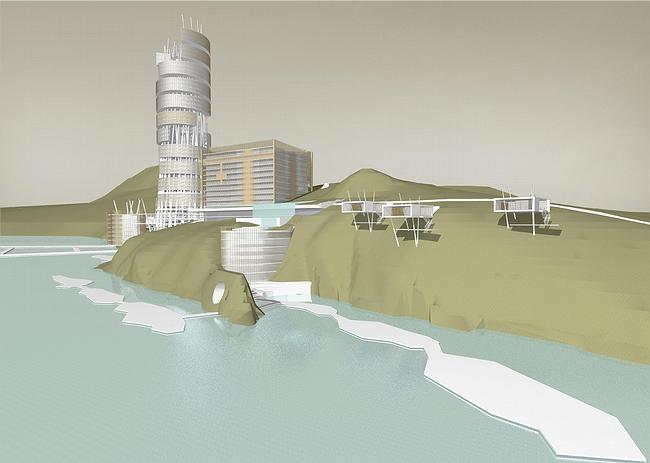 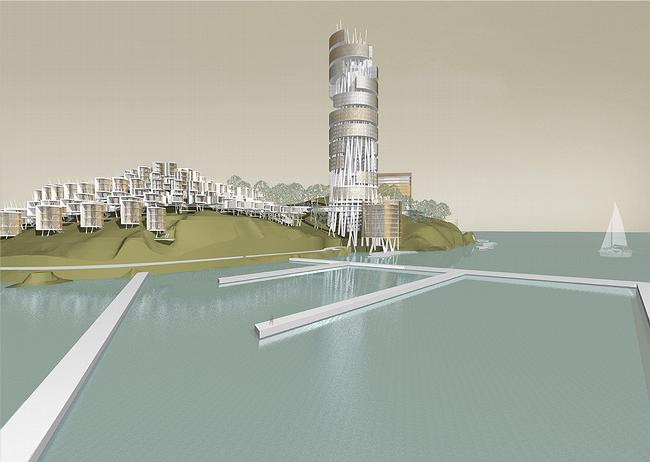