From monumentality to media

In the place of the existing Cheremushkinsy market there will be a modern retail and entertainment complex with a rounded building above with offices and hotel, and a panoramic restaurant on the upper level. The hotel’s façade will be turned into a huge screen that consists of led-lights.

The wind of change sweeps over the streets and squares, tousling roofs, thinning boulevards, dropping among houses 30storied towers and taking to nothing so cherished houses, districts and gardens. Is it the wind’s fault that in the place of former fields there is not a vacant spot and for further experiments they have to put new onto old?

Now it is turn of one of the veteran guards of south-west – Cheremushkinsky market privede the nearby areas from Gagarinskaya square to Kaluzhskaya, first with farm products, then Chinese manufactory and in the end – mix of all that. There have been for long discussions over its reconstruction with enlargement and potential additional building. According to the order of Moscow Government №1138-ПП on18.12.01 “Additional measures on regulation of market trade in Moscow”, the construction’s owner OOO “Cheremushkinsky” gathered finances and was considering different variants on reconstruction which gradually got larger and occupied the whole market’s site hiding under the new storyes the old surface. By 2003 the concept had entirely got rid of architectural allusions on the unordinary construction that had been there for 30 years.

Historical note
In 1970’s in Moscow were built a few unique buildings for farm products trade. It was supposed that it would be like a fair with products from all over the country. And they were built accordingly. Huge open halls, under high and beautiful ceilings is being done roaring trade, painted with all fruit and vegetable colors. For covering large market rooms without intermediate supports was used one of the modern of that time technologies – reinforced arched shells. Many world-known stars of architecture of architecture, such as Alvaro Siza and Oscar Niemeyer, that time made constructions main elements of which were coverings that combined values of concrete and steel. Each material did it share in providing reliability of a construction and in result there appeared unseen before compositions. Such work required from those who made projects knowledge, experience, knowledge of calculation systems and special intuition concerning constructions, vision of their work in space. So, in work was engaged of the best constructors – N.V. Kancheli. He made projects of Basmanski and Danilovski roofs in the form of folded shell, and also the sail-like roof of Cheremushkinsky market. These buildings, built almost in one period, after the tragedy in Baumanskaya street in February, 2006, were automatically put in the black list of potentially dangerous, demolition of which depends how soon new projects that will take their places will be approved.

The tragedy of 2006 – the Basmanny market breakdown immediately made the constructions of such type an undesirable element of scenery, so conceptual architectural projects were activated and passed to project stage. Most of the corner part between Vavilov street and Lomonosov prospect was occupied by 4-storey building, in the middle of which there was an atrium cover with transparent shell (a slight refer to concrete sails of the old market). Along south-west boarder of the site there was a 19-storey board of the hotel by the market. Quite traditional composition suddenly was broken by a huge gap in the high balk making a huge window viewing sunset, there are no other visual orientations in that direction. Or rather, corner stairs-lift block framed with glass alone rises over the stylobate and only on the top, 19th storey joined the hotel building by the glass gallery.

Such detailed description is given not without purpose. Many of the ideas have evolved for the past five years from abstract outrageous to energetic modern architecture complimented by most advanced technologies. The broad stylobate part repeats the site’s outline and above it is place a high and long building. In contrast to the rounded exterior corner of the stylobate, the vertical building is curves in smooth arch and in top has the attic storey with almost 12 meters console extension, like an illusionist’s wave of hand that stopped over the “magic top hat” – arched extension of the stylobate’s atrium, through which beams projectors’ light. And like a silver coat, flat surface of the hotels wall “ falls” from it that took the place of the old “window to nowhere”. It is here, not in the illusionist’s hat, miracles will happen every night. Instead changeful charm of sunset, the audience will have most advanced light technologies that can turn a wall into a unique almost 3 000 m2 screen showing any dynamic image with the help of thousands special lamps.

Engineering note
The basis of the media-façade’s technology is the integration of LEDs into metal construction of lamella type, which is put in front of the building’s facade. So, the total light transparency of glassing becomes just a little less. Installations can be put not only plain surfaces, but curved as well. Image on facade is created due to red, green and blue lights. Three or five of them in this color combination form one pixel. Quality of an image depends on number and intensity of lights, i.e. on pixel resolution and can be changed during exploitation. Media-facade is able to transmit tv-channels, animation or video clips from local devices, and also unique programs of dynamic building illumination. Static images are also can be used, but technical features of media-facade depend on distance of apprehension. Actually, media-facades can be set the way that an image can be seen from 20 meters distance, but this requires considerable expenses. Most rational is the distance in 50-300 meters from a viewer, this allows to reduce number of pixels (LEDs). In this case, self-cost of media-facade will be 4-5 times less than street screens.

Uniform glassing of the wall-screen is cut with thin vertical and horizontal imposts whereas curved facades of the high building and cover over the atrium are cut with metal structure from continuous metal cores. The net is the bearing construction of the shell as well as décor element which theme echoes in large glassed vertical stylobate’s surfaces. Some facades of the vertical building and stylobate are designed with use of dark brown panels, like thin lines that line stylobate in horizontal stripes and the high building into vertical ones.

Alternating of glass surfaces and dark insertions are to compositionally unite the new complex and the administrative building of 1970’s on the opposite side of Vavilov street. Though here such ethic will hardly influence on the image of the building that is being constructed. It will never be able to get lost among neighbors. This the product of another epoch, another culture that brought another means of influence then monumentality. Comes the era of “media” architecture where not form, proportions, texture and color will express the authors ideas, but the entire exterior of a building will become an interactive tool of transferring an information and emotional charge from the author to the audience. 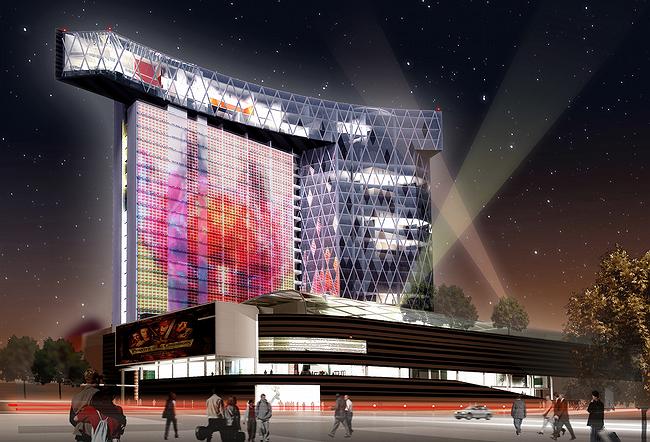 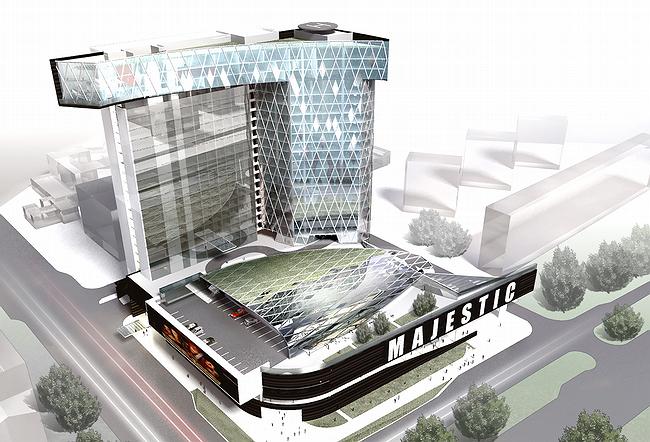 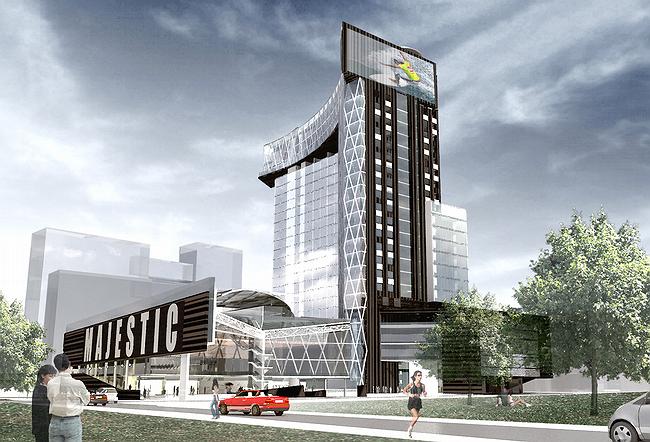 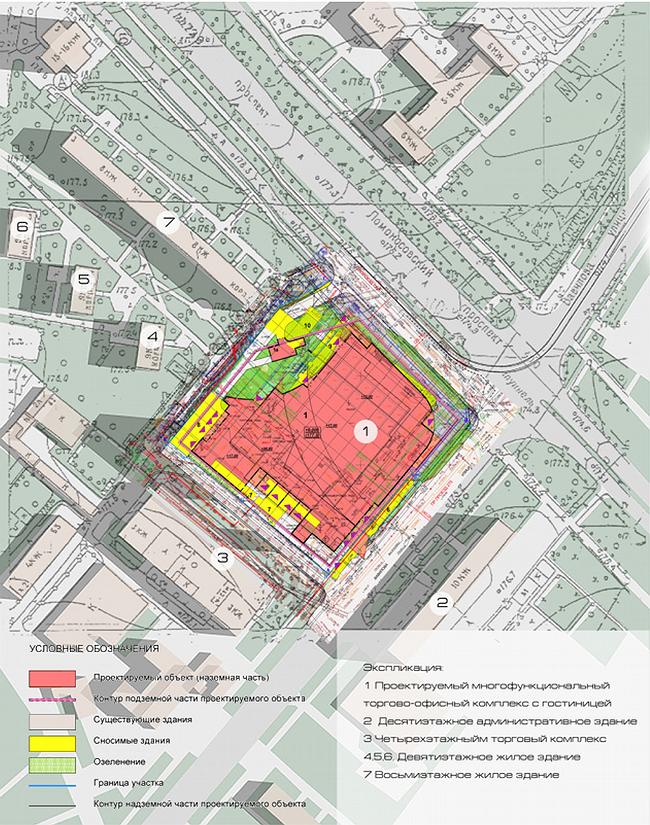 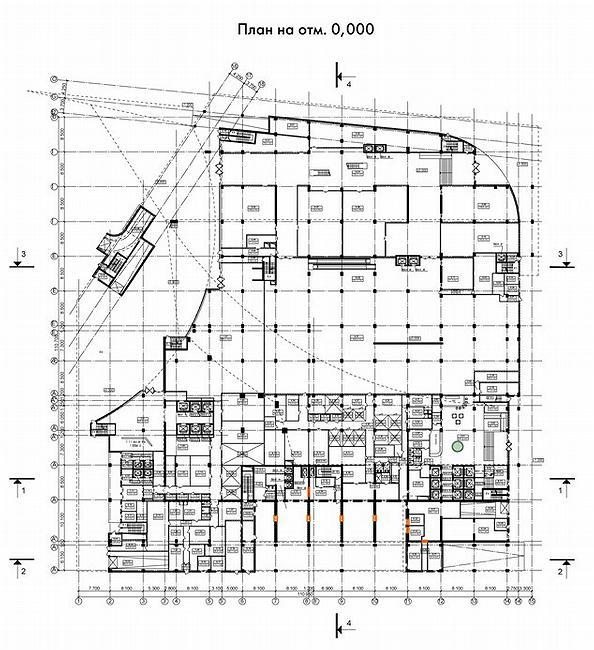 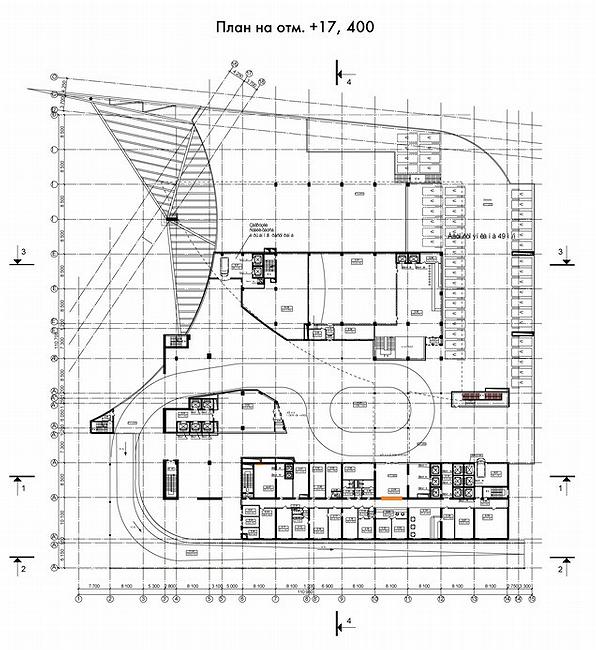 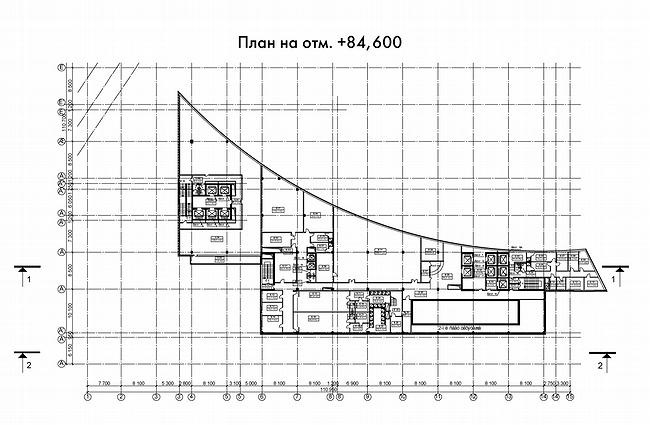 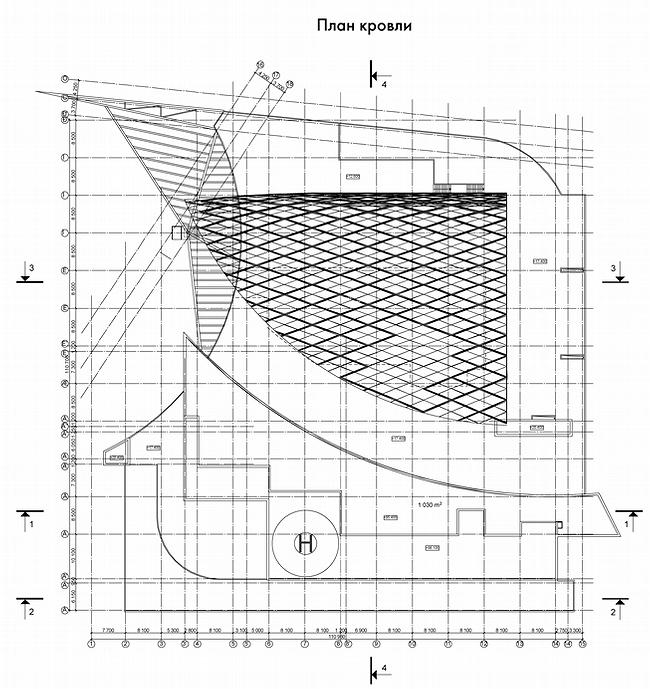