This summer, the architectural workshop ADM is completing the project of renovating a 1950s administrative building, which is to drastically change its appearance.

The edifice was built in 1951. First, it was a planning institute, and in recent years its premises were let on lease. The building itself was of no particular architectural interest – a standard block of sand-lime brick – which cannot be said about its surroundings. Actually, it was the location of the building (a quiet, green residential neighborhood) that prompted the investors to the idea of equipping a high class house. The best renovation project was chosen through a tender. The prize was given to the ADM Bureau that suggested a drastic change of the image of the edifice just with a few masterstrokes, keeping the construction and the envelope, and without the need for complex technical solutions.

In order to get a bright and expressive architectural object instead of a dull gray amorphous bulk, which was formerly an institute, ADM dramatically changes the look of its facades. First of all, the architects made a reproportion of piers and openings – once small windows that “perforated” the massive wall were extended down to the level of the floor. This not only let the authors make the interior lighter, but also emphasize the facade with dynamic verticals. The windows are also visually stretched due to the inserts of fiber-reinforced cement that reminds concrete. The facades themselves are veneered with clinker tiles in imitation of old brick that is in favorable contrast with this silver-gray surface, and glass, and with the composite material “alpolic” that imitates wooden texture and of which the apertures of windows are made of. These narrow “wooden” inserts are installed on one side of the windows over the bricks – they alternate in a chessboard pattern on the left or on the right of the opening, depending on the floor. This “glitch” allows to avoid monotony in the façade décor and to set a certain rhythm that echoes with the graphic variegated bricklaying. And in order get rid of the feeling of a squat elongated structure for good, the architects fully pane the stair blocks. The transparent cleft visually splits up the block of the former institute into compact segments that are more comfortable for the human eye. The contrasting combination of textures and colors of the finishing materials – brick with its rich color-palette, light “wood”, silvery aluminum (the horizontal lines of T-bars mark the floors), polished glass and rough “concrete” – gives visual appeal and beauty to the adjusted ornamental composition of the façade. In this way the building is nothing like the dull “box” of 1950s. As architect Andrew Romanov says, they managed to completely escape the “office-like” impression thanks to the balcony balustrades. Every room gets two balconies – one of which is used for its designed purpose, and the other is intended for the air-conditioner (which also prevents from setting it at random in the future). The simple constructions of the balconies adorn the facade with relief projections and add thin delicate lines to its large rhythmic pattern. Reconsidering the laconic flat roof of the original building, the architects extend the material of the wall to frame the upper windows. The loops of bricks seem to “stitch together” the volumes of building and the roof with its laying. The entrance areas of the first floor with nonresidential premises are elaborated just as thoroughly – the authors put porches, benches and the fencing integrated with granite there, planned the advertisement positioning. This set of simple and reasonably priced measures turned an ordinary construction into a unique architectural structure which seems to be bound to ravish the citizens. 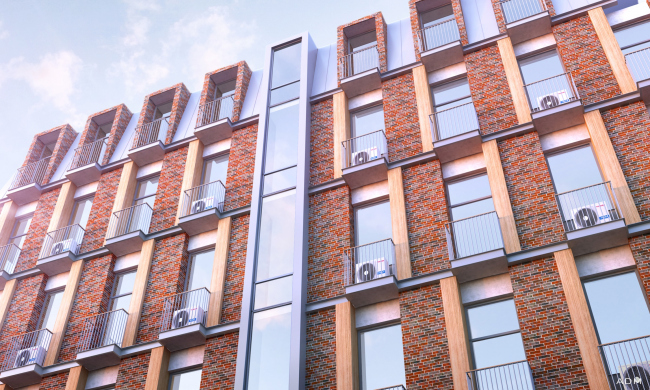 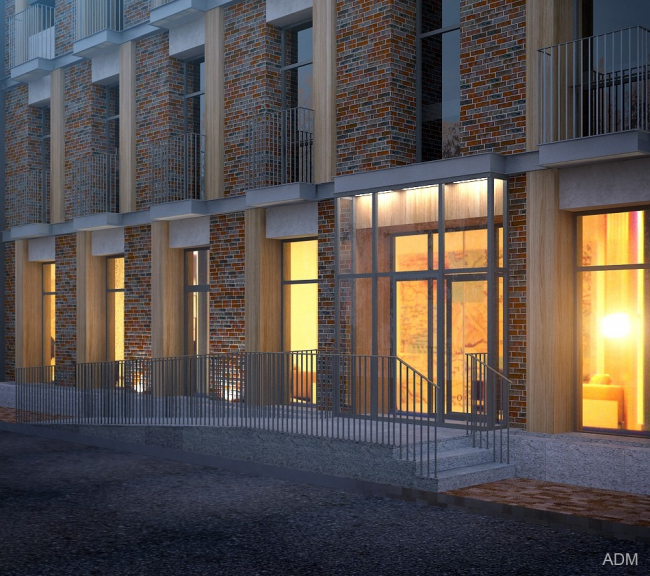