Tree of the House

The architectural collection of the resort “Pirogovo” was once again replenished with a house named “Fan” designed by Totan Kuzembaev workshop and built on the bank of the Klyazma lake.

The house took its name from the main glazed façade facing the lake– the architects gave it a peculiar smoothly curved shape, thus at the most exposing the terraces and the inner rooms to the surrounding landscape. On its other side, the cottage is split in two: the front of the building is divided for the sake of preserving the few pines that spread deep into the lot. The quaint broken form of the plan and the smooth line of the main façade are perhaps the only elements the authors let their fantasy play with. The rest is fairly linear and square, but nevertheless very expressive. Horizontal lines (floors, roof, railings and stained glass moldings) are in perfect balance with vertical ones; and large sizes are in proportion with small ones. And still the thoroughly adjusted composition doesn’t seem at all static, because the huge stained-glass windows formed with ingenious frames of natural wood reflect the ever-changing water, forest and the sky. The natural drop of the relief on the land site (it goes down three meters approaching the water) was used for the semi-basement. The swimming pool, bar and the billiard room located in there are lit by natural light. If we remember that the bank of the reservoir is in the South, one can only be jealous of the new owner of the “Fan”: on a clear day the rays of the sunlight penetrate deep into the interior of the entire the house. By the way, it was for the sake of the daylight illumination that the architects made the supporting poles for the terrace of circular in cross-section, after all, unlike square or rectangular poles, they let in more light, thus improving the insolation. Besides, the slate faced cylindrical columns resemble tree trunks, and this makes the house fit in with the pine wood even more naturally. House blends into the environment harmoniously not only due to its geometry, but also to its materials. Like most the buildings by Totan Kuzembaev workshop, the cottage is wooden - only the basement with the swimming pool, sauna, billiard room and technical facilities, is made of reinforced concrete. In total the project included three types of wood. The frame of the building and its supporting structures are assembled from laminated pine timber. The trimming of the facades, the ceiling of the pool, the stairs, planking and the railing of the terraces are made of larch, which is resistant to high humidity due to its gummosity. And as a floor covering and the material for furniture, along with pine and larch, the architects used stained oak that looks almost black. The overall layout of the house is traditional: the first floor of a house is occupied by an office, utility rooms and a common area with access to the large terrace facing the water; the bedrooms are situated on the second floor. The public area that brings together the living room, the lobby, the kitchen and the dining-room is made in natural, golden tones of pine and larch, which contribute to the atmosphere of a summer holiday. The office, on the contrary, is designed with use of the above mentioned black oak. Totan Kuzembaev says that it was made to add solidity and seriousness to the room.

And if outside the house looks laconic and simple, then the interior turns out to be extremely expressive and emotional. Such impression was mainly achieved by introducing several sculptural elements that perform both functional and decorative roles. First of all, it is the central staircase of the house, surrounded by wooden book-shelves. In fact, the stairs connecting the first and the second floor are placed into a latticed cocoon of poles and shelves. Totan Kuzembaev explains that the prototype for such composition was a tree with a thick crown. The shelves get “denser” as they ascend – if it is still gauzy downstairs, on the second floor, where the private rooms are situated (three nurseries, the host- and the guest bedrooms) it blocks the sight completely. Another sculptural composition is the fireplace, decorated with striking wall reliefs of the wooden “ribs”. Here is how Totan Kuzembaev himself describes this small architectural piece: “Fireplace was covered with a pleated skirt”. This element, surprisingly powerful in its architectonics, absorbs a great number of symbols and association, reminding of man-made constructions (like the organ or a hulk) and, at the same time, of natural forms (it can be compared to a cliff or a waterfall). However, this doesn’t complete the list of the authors’ devices, harmoniously integrated into the structure of the house. For example, as to the living-room illumination, the architects invented an aluminum chandelier-ring, with a diameter of . It was to be fixed on a central rod, producing an effect of weightless glowing circle, but the builders decided to play it safe and secured this UFO with additional steel cables. However, this didn’t make the chandelier any less significant, but only emphasized the up-to-date status of the “Fan”. 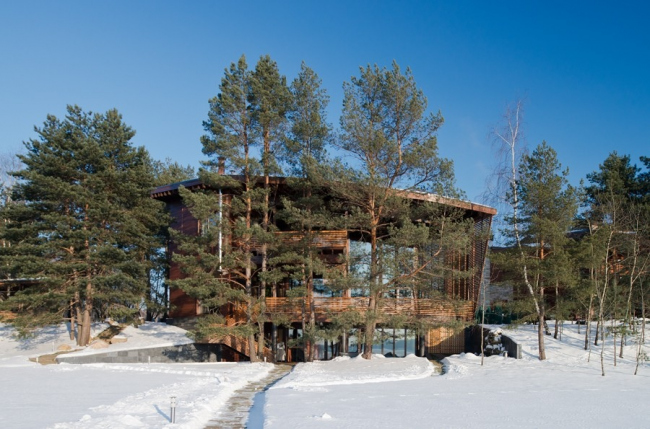 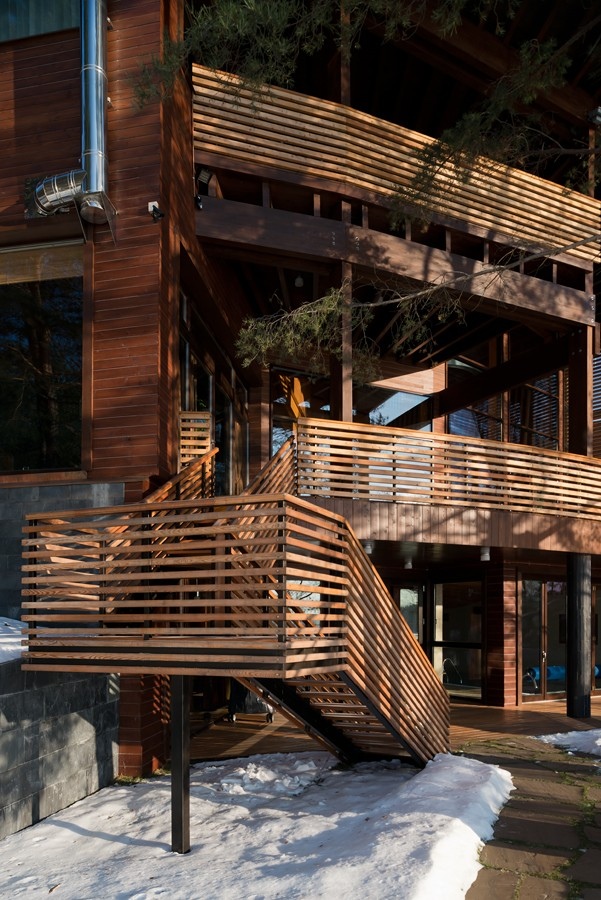 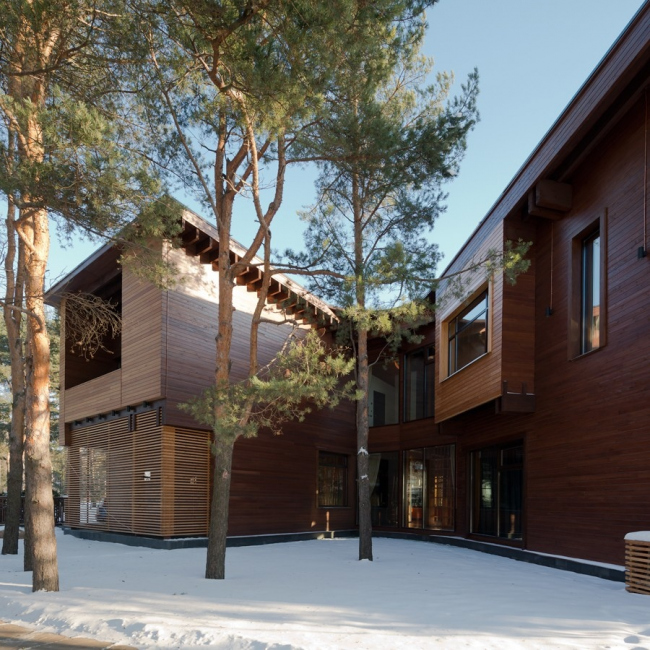 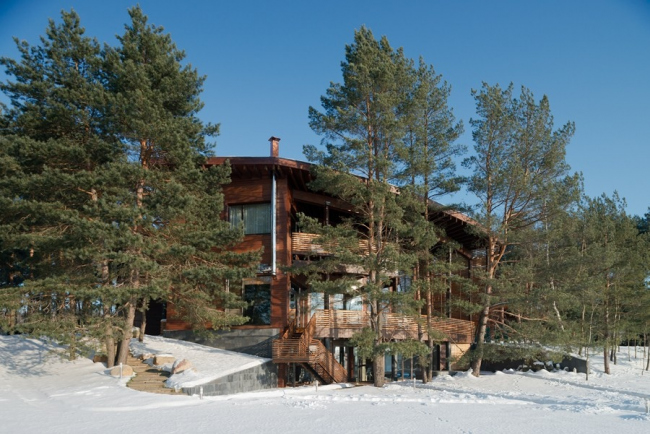 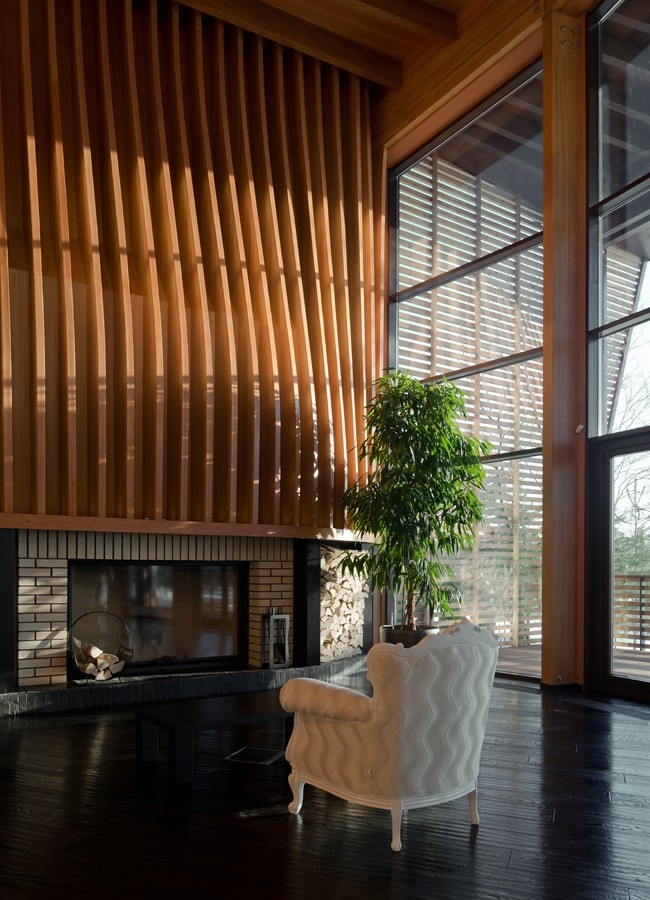 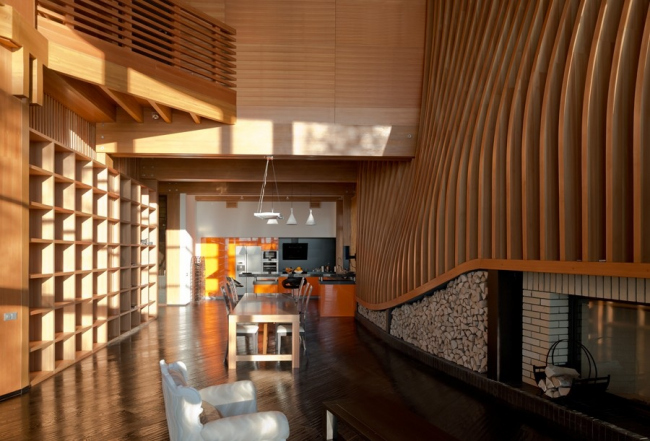 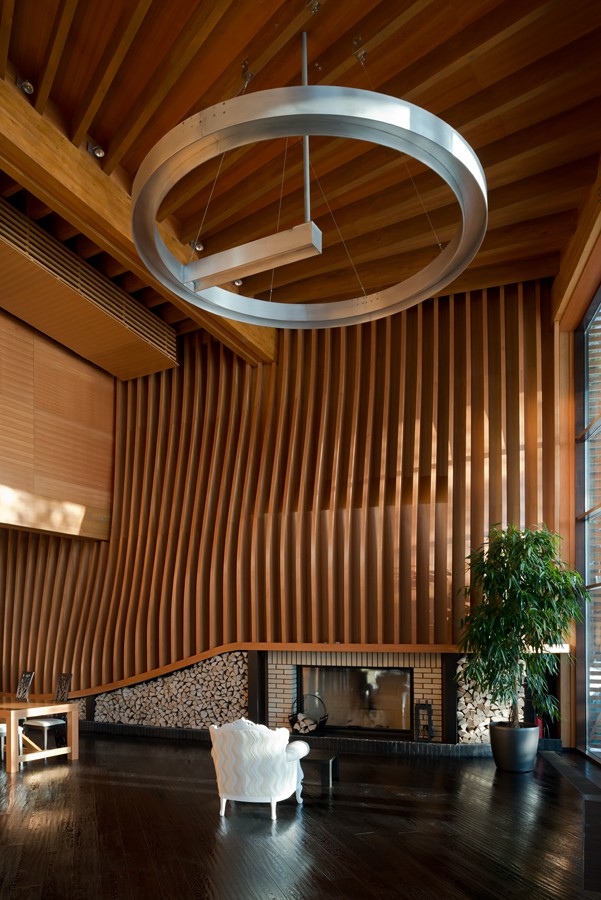 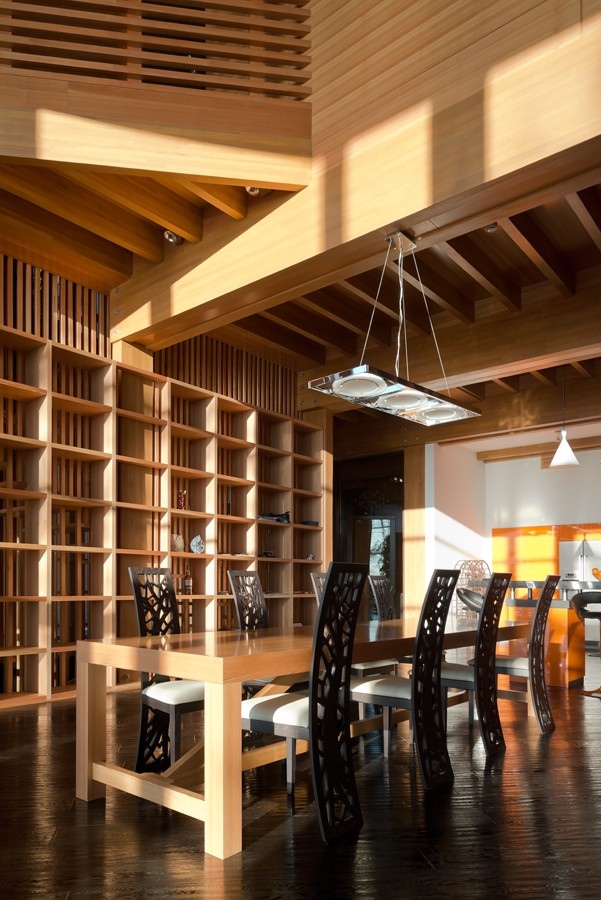 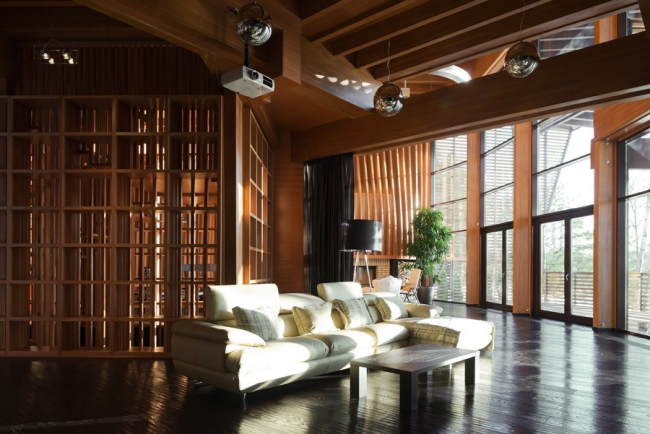 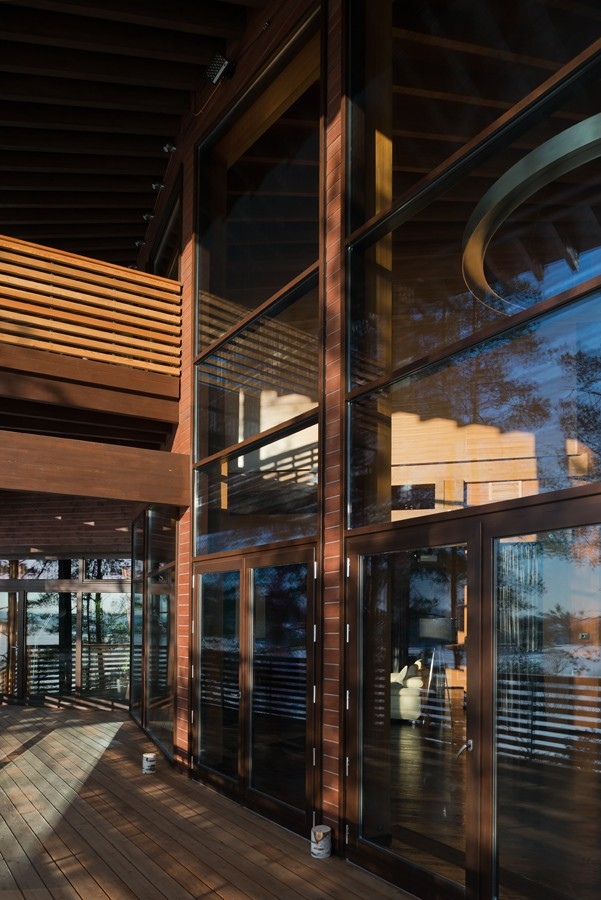 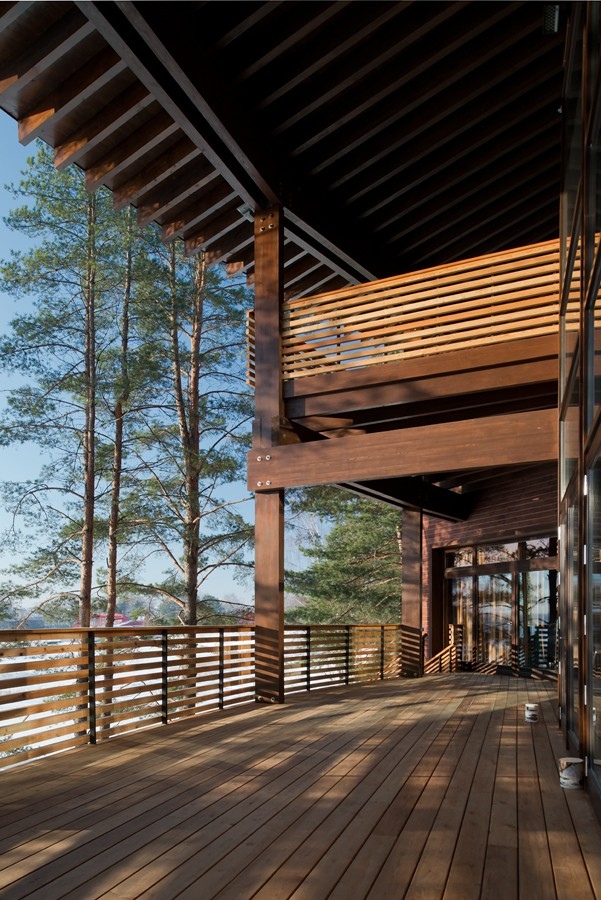