The tender for the sketch plan of the new district took place in December of last year. It was organized by the company “VTB Real Estate” which holds a territory of 99.87 hectares in arguably the most prestigious area of Moscow region, between Rublyovo-Uspensky and Novorizhskoye highways. About a half of these hectares though falls on the restricted zone of the gas pipeline, which breaks up the area into three nearly equal segments. On the one hand, it forced the investor to include a landscape park into the future residential district (there are no other possible options of using this area). On the other hand, it suggested him an idea of creating three neighborhoods of different class. Basically, these neighborhoods were the actual subject of the tender - the participants had to suggest either an option of a neighborhood of low-rise residential houses, or a district of townhouses, or a cottage settlement. Alexey Ivanov’s Workshop “Arkhstroydesign ASD” having an impressive experience in each of the mentioned genres, suggested a perspective of developing the whole territory. That is why they named the project “Anthology”.

“Our “Collected Works” not only suggests different forms of site development but also three essentially different master plans, – says architect Alexey Ivanov. – We proceeded from the assumption that cottage buyers appreciate a more traditional housing, the audience for townhouses doesn’t mind some liberties, and the dwellers of the city block are open to innovations and experiments. So our design concept of the housing gradually evolves from traditional to futuristic”.

Actually, already by the time of the tender, the customer had a rather detailed zoning scheme of the future district and the layout of the three neighborhoods. However, the participants of the contest could change it at will, and Alexey Ivanov’s team used this opportunity. In the scheme, the site itself has a very intricate shape: you might probably compare it only with a hammer with a pointed tip. This very tip is the border of the area, closest to the road, which is planned to be a neighborhood of low-rise multifamily housing. The rectangular area of townhouses spreads on the other side of the “handle”, perpendicular to the road that runs through the park; and only behind the park area there is the future cottage settlement with a layout that looks like a fish with its tail leaning to the park and its sharp nose turned away from the highway. Original master plan of the territory According to the plan of VTB the “fish” was dotty with households – square houses and compact lots that the territory is cut into. Between the building lines VTB ran a road that forms a simple loop in the center of the village. “It seems as though a lasso was thrown in there – says Alexey Ivanov, who found this layout not very humane from the very beginning – Too many houses, no hierarchy of space and, as a result, no harmonized environment – only cottages, fences, and roads”. The architects came up with another town-building design: they built a central avenue, shifting it closer to the western boundary of the site; in its broadest point they outlined a semi-circle, arranging the houses like an amphitheater in the center of which they placed a public square. In order not to place all the households along one single axis the architects shoot out several short “sprouts” and projected another loop closer to the park. As a result, the panorama of the township became more interesting and the total number of households is almost in no loss. As to the architectural design of the cottages, Alexey Ivanov stays loyal to his principle: offer to the customer only time-proved options. Almost flat roofs with wide overhangs, large windows, the combination of dark stone and light wood are all obvious allusions to Wright’s “Prairie House” and the architect admits it. The use of wood adds seclusion and warmth to the houses, creating an image of a cozy countryside dwelling, close to the nature. Townhouses in developers’ project looked like two snakes intertwining between the driveways on one side or the other. It seemed like an interesting layout idea but it expanded on the whole territory it might have caused monotony of the surrounding panorama. “Arkhstroydesign ASD” built a road along the perimeter of the site intending to separate it from the motorway with planted land instead of houses. This choice helped to keep the townhouses as far from the road as possible. The houses are interconnected in various ways: stepwise, in stiches and in small arcs. Such arrangement allowed placing a maximum number of houses on the site, but due to the fact that all of them were turned in different ways, none of them face each other “window to window”. Multi-gabled roofs and sections of different height turned different ways emphasize the feeling of privacy of every separate house. These volumes seem to be formed of several houses inserted into one another. This makes their silhouettes picturesque and compensates for the high density of the housing. And finally the low-rise district is carried out in a deliberately futuristic way.

Alexandr Khomyakov, the author of the master plan, called it “Flexibility” which implies a flexible approach to the site cultivation, i.e. changing stages of construction and financing and the possibility of independent adjustment of each cluster. Transportation services are provided on the outer perimeter of the lot. In a pointed triangle of the sector, the architects introduce a bisector of a wide green boulevard with houses on both sides. These are fairly large structures, shaped like ovals and smooth arcs in the plan, and therefore reminding ships. Certain similarity with liners is achieved through numerous terraces formed by the reducing the area of each consecutive floor, and also through coating the building with transparent and colored glass. Stylobates of all the buildings are developed to the maximum. Not only do they hold numerous public functions and parking, they also serve to organize cozy pedestrian plazas, protected from sun and rain. The architects apply the green roof system, thus the main deck of the ship-houses turns into a fully-fledged public garden connected to the adjacent park with a wide bridge. In fact, the boulevard gets a whole upper level mainly meant for the dwellers. In other words, the architects join each of the segments of the future “VTB city” landscape park. It turns into a boulevard that leads through the gated estate, then a broad promenade through the townhouse district, and finally as a wide protuberance it floats into the low-storey section. This gives a clear flavor of country life to city-like (both in its spirit and density) landscape. 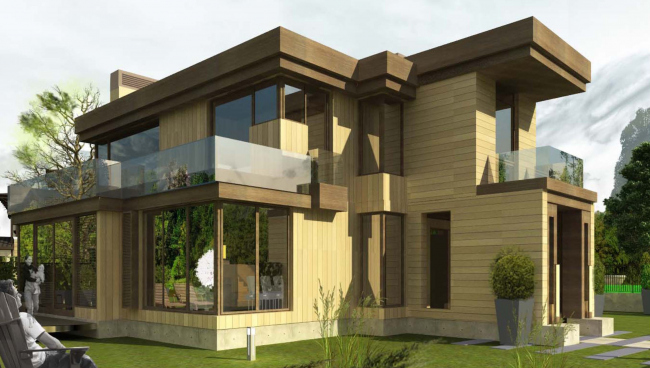 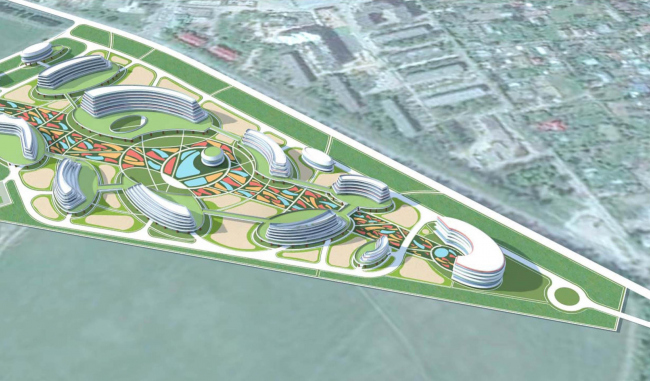 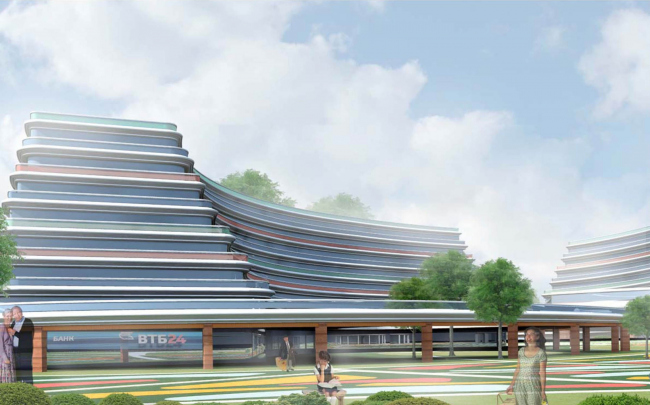