Having responded to all the themes that were set by its architectural context, the new bank building in the Butikovsky Side-street still does not look lost amidst its neighbors. Quite the contrary: one can regard this new building as the old Ostozhenka's breakthrough into the company of the glamorous "golden mile".

The new building of UniCredit Bank has been built at the crossing of Korobeinikov and Butikovsky side-street. For those who has even the slightest interest for the contemporary Moscow architecture, the specification of the place alone means quite a lot: by the end of the 2000's, all the industry publications were heatedly discussing this particular part of Ostozhenka area, and, truth be told, it is this particular place that comes to mind when the proverbial "golden mile" definition comes up in the conversation. On the left, on the right, and diagonally across the street, one sees the buildings by "Project Meganom" Bureau, and two houses by Sergey Skuratov situated a bit further away. Nearby, a bit deeper into the site, stands the first building of UniCredit Bank (back in those days it was called "International Bank of "), built by "Ostozhenka" Bureau in 1995 and also celebrated by the journalists and industry awards. Actually, the new building became the continuation of the 1995 building: it houses the HQ offices of the bank. The new and the old buildings are connected by an overpass at the level of the second floor, and they have one common parking lot with one entrance - so the two buildings function as a single organism. Office building in the Butikovsky Side-street, 9. Plan of the second floor. "UniCredit Bank, the former International Bank of , is 's first private bank - it has license number one. Its management team is international, and it operates on western principles rather than Russian ones. Besides, Russian and foreign leaders of the bank control and balance off each other's decisions, - the chief architect of the project Valery Kanyashin shares - They were easy and pleasant to work with because the taste of one particular leader never really prevailed. The style of the building was from the start defined as contemporary, and the further details (within reason, of course), the commissioners left to our own discretion. This is why we were able to make facades that were not typical for the standard office. If the commissioner had not been of the international kind, the building would have come out different".

The building, indeed, looks unusual. At first glance, one cannot even get it how the architects were able to dissolve such a huge thing in the space and in the air. Its surface is covered with ripples and the whole building looks like a ghost or maybe a 3D image of its own self. Not completely, but to a very large extent it seems to be devoid of its bulk. Besides, if we go past it and down to the river along the Korobeinikov Side-street, one cannot get rid of a feeling that the house is gently moving away from us, as if letting us by to the riverside. "Almost devoid of a bulk" does not mean with no bulk at all: the matter this bank building is made of, is, though thin, quite palpable - it is this matter that creates the effect of slight flexibility and at the same time the deluxe look of an expensive building. The effect is akin to a Chinese screen: one cannot see a thing behind it but at the same time it does not look like a blind wall at all, it is quite graceful and it is quite unobtrusive. Oh, one more detail: in the nighttime the whole building lightens up like a lantern. This "transparent non-transparency" is the result of the fact that the glass facades covered with the fine dots of silk-screen printing from the side of the street are covered with the grilles of the horizontal ceramic lamella: thin stripes of terra-cotta color. The striped canvas is pierced in some places by the large rectangles of pseudo "windows" that are larger than the usual windows, ones that you might expect in such a building, by two or three times. The decorative openings are asymmetrically scattered over the facades; they liven up their rhythm and make it more sophisticated, at the same time adding to the likeness to a "usual building", one falling in with the archetypes of the city, according to which the buildings are to have windows in them. The brick-red color of the lamellae fits the tone of the "old" (1995) building on the embankment and provides the integrity of the ensemble of the two buildings, as well as for their "contextual respectability": after all, we are downtown, and the terra-cotta color is one of the most "historical" ones. The stripes also fit the context: nearby, on the Butikovsky Side-street, there stands a house built by "Project Meganom", covered with vertical lamellae from top to bottom (even more transparent-looking; the horizontal strokes of the "Ostozhenka" building is more palpable in comparison to it, which makes sense because these strokes, among other things, need to "hold the corner" of the street, and this is quite an important task to do). The said corner - the crossing of Korobeinikov and Butikovsky side-streets - is definitely the most important one in the entire building. It virtually plays the part of its main facade, it "business card": it is the first thing that catches the eye of a passer-by who walks off the Ostozhenka and down the Korobeinikov side-street. All the right-hand side of the side-street is filled with a house that was built (just like the above-mentioned lamellae hose) by Yuri Grigoryan - the long bulk of the building wrapped in a thick layer of mortar "holds" the line of the side street. Аnd, directly above the crossroads, at a third-floor level, the surface of the wall shouts off with a glass volume of a "city villa" inserted into the house. Its glass "iceberg" appeared back in the days when the crossing of the Butikovsky and the Korobeinikov side streets was still empty. And now in order to keep this part of the side street from looking gloomy and constrained, the "Ostozhenka" architects had to retreat before the energetic mass of glass.

Office building in the Butikovsky Side-street 17-19. View from the Korobeinikov Side-street from the Ostozhenka side.

By doing so, they were able to "fool" the perspective with the play of lines and shapes. To cut a long story short, the lines of the top and bottom edges of the terra-cotta screens before the facades are not parallel to the ground. They rise diagonally up to the crossroads, fully capturing a whole floor, and it turns out that the corner of the building that faces the crossroads is lower, while the other corners "fly up" very much like the wings of a paper butterfly or maybe a melancholic smile stylized into a triangular check mark. Peculiar is the fact that while along the Butikovsky Side-street this technique is implemented in a linear and decorative fashion with the lower outline of the striped screen being cut diagonally and continuing the linear play that is there in the glass volume of the "villa", on the side of the Korobeinikov Side-street, the terra-cotta wall breaks away from the red line turning about twenty degrees to the left. The basement of the building at the same time stays firmly in its place; the two volumes veer off from one another like the steps of a spiral staircase would or the shelves of a whatnot that rotates on a pivot. Besides, as we go further down the side-street, the basement floor grows into being actually a double-height one, turning up its pointed "nose". If we are to look at this building from the riverside, from that standpoint it will look like it is made up of two volumes put on top of one another with a diagonal shift - the terra-cotta corner overhangs above the basement, and the play of lines turns into a whole 3D composition. But what is interesting is the fact that the surface of the terra-cotta grille from this standpoint looks like the immediate continuation of the brick wall of the old bank building, it is at this particular point that the similarity of the two buildings is particularly obvious. This similarity is not to be overestimated though: the "strokes" of the new building are a lot more sophisticated and transparent, and the line of its cornice continues the perspective play, this time strengthening the contraction and making the street a little bit shorter (of course, it only looks that way).

As a result, the space of the Korobeinikov Side-Street stratifies: its lower part is still dominated by the red line, while the upper part veers off to the left. The volume of the glass "villa" and the volume of the bank are engaged in a silent dialogue: one offends and the other retreats but it does so not only with dignity but it looks like it really knows what it is doing - it sets a new direction of space, yet new for this street: a little bit more on the left side and a little bit higher - a virtual "Stairway to Heaven"! In any case, if you walk down the street without taking your eyes off this building - and this effect has been proven - that the steep descent of the pavement will feel really unexpected to you and even inappropriate. You will feel like jumping up!

The bank building has yet another peculiarity: not only does it carefully reflect its environment but it also looks different from the surrounding houses, significantly different. First of all, it has become a common cliché to blame the Butikovsky of having become a "dead" street - few residential houses are left there at all, and this street is roamed mostly by the security guards. To tell the truth, the architects are not to blame for this at all, but still what ended up happening was a rather strange environment. The new bank building, on the other hand, is a living and breathing thing, it works, and it has value - like a workhorse opposed to some unnecessary luxury.

Second of all - and this is a plastic difference already - the building opposes itself to the neighboring houses with their respectable stones and their traditional bricks, with their serious and pompous "sturdiness". The new building, unlike its neighbors, sports a look of being a tiny bit incomplete: instead of self-contentedly presenting itself, it turns away, withdraws, and covers itself with a stroke sketch. The asymmetric openings of the variously-sized "pseudo-windows" in the thin fabric of the lamellae look, on the one hand, like a torn-up cloak, and on the other hand, it looks like the old fence lath. And it is namely because of this that the new bank building can quite unexpectedly seem like an echo of that old, wooden, "incomplete" and unpretentious Ostozhenka that is no longer there and that so many people so badly miss. 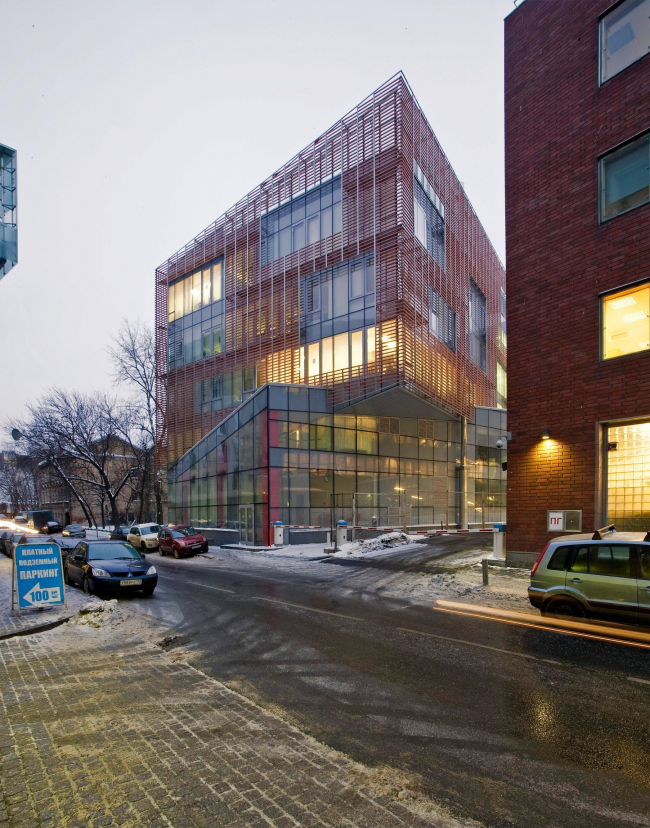 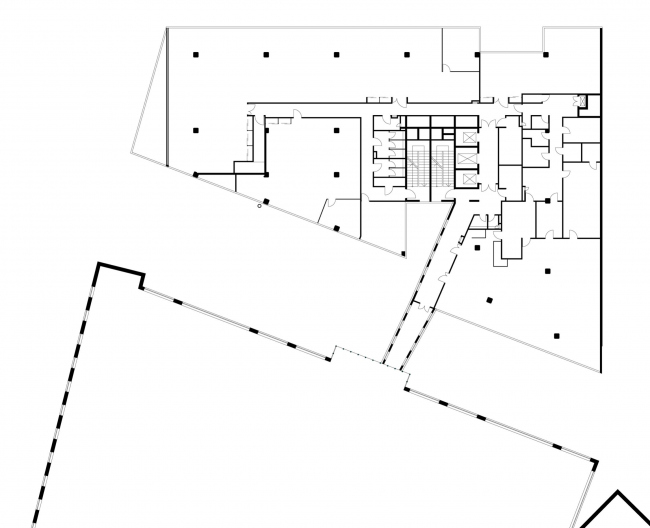 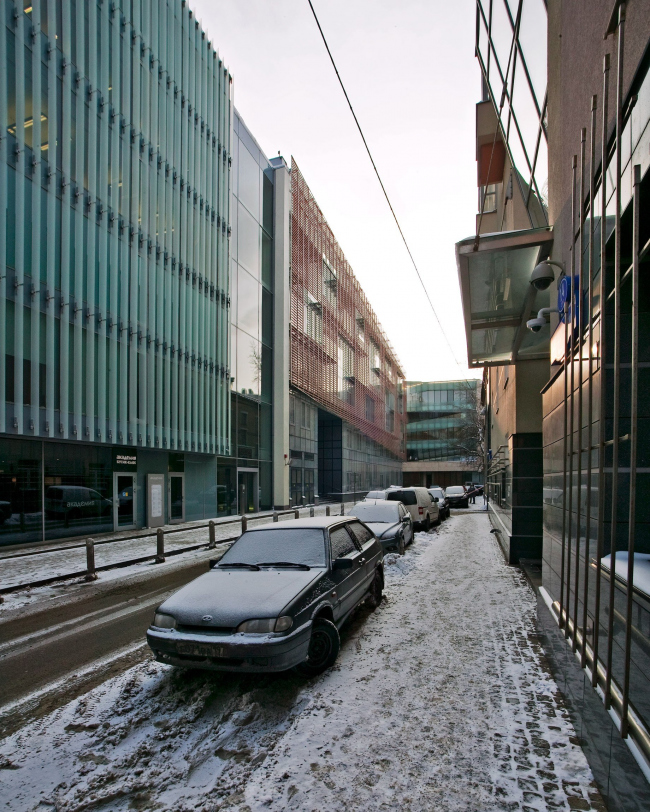 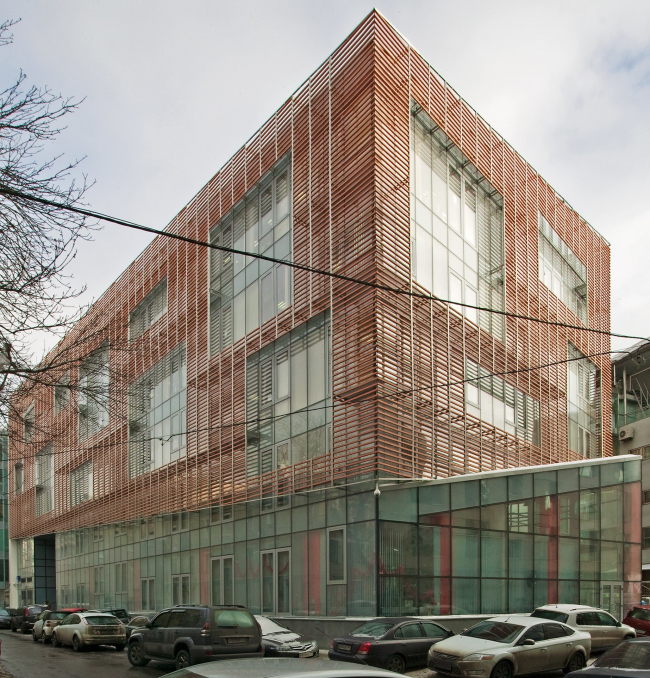