The simple and functional volume of the hotel building is not only surrounded by a garden - it grows together with it, or rather, almost literally, grows OUT of it.

The hotel will be built on the Caspian Sea shore in Makachkala's satellite town of . The land site is located two blocks away from the shoreline and between two roads leading to . In front of it, the runs - therefore it is separated from the sea twice: by the sheer distance and by the road. In this place, most of the city's sporting activities are concentrated: the Ali Aliev Palace of Sports and the new recently built stadium of "Anji" football club are located here. As for the construction site, it is a wasteland of a trapeze shape, devoid of any houses or even vegetation.

Here, under the auspices of the Foundation of Social Assistance in the management of town planning "Novy Gorod" ("New City") (at a private investor's expense and without the involvement of public funds), it was decided to build a four-star hotel managed by an international network operator in strict accordance with international standards in order to create comfortable conditions for the representatives of the world business community staying in the republic of Dagestan. The hotel is also meant to serve sporting events, including the world-class ones: it is planned that during the football matches the hotel will accommodate the teams and the football fans.

To develop a draft of such a hotel the commissioner invited ADM Bureau shortly before the New Year; now the project is ready to be submitted for the approvals.

The first thing that the architects gave their thought to was the vicinity of the sea, that, paradoxical as it sounds, is almost invisible behind the dense housing of the neighboring blocks. Due to the seismic hazards (earthquakes up to a 9-point magnitude are possible here), the height of buildings in Makhachkala is restricted to five floors - this is why the idea of making a tall building that would rise high above its surroundings, was no option from the very start. As a result, there was only a small strip of the see left to be viewed against a rather bleak city panorama. Besides, the international operator's requirements to the efficiency of space usage were quite rigorous: what was demanded was the standard delimitation of rooms accessed from the corridor - and nothing more. "The most effective shape for a hotel building is a rectangle. This was not the case when we could afford any experiments with shape-making", - the author of the project Andrew Romanov shares.

It looked as though the hotel building was going to end up as another rank-and-file dull parallelepiped. The architects, however, did not want to put up with this, and, as if to offset the mundane surroundings and the strict limits of the specifications, they lightened up the project by combining the simple orthogonal shape with the smooth "natural" curves. According to the specifications, the area of the first tier of the building that included the lobby, the restaurant, the meeting rooms, and the administration office, was to be almost twice as large as any of the other four floors of the hotel. Instead of following the example of "classic" modernists and turning this extra volume into yet another parallelepiped, the architects made its outlines sophisticated and curvilinear. A few triangular protrusions look like fins, and generally the entire plan of the first floor looks like a giant fish. The protrusions include the entrances to the reception, the lobby of the meeting rooms and the restaurant - their homogeneous intertwining spaces of free layouts seem to be spilling over to the outside area, leaving the inside rectangle for the maintenance premises behind the walls. The roof of the first floor protrudes still further, forming a few large marquees that inherit the rounded triangular shape from the outlines of the lobbies of the first floor. The marquees overhang above the open-air terrace along the glass windows of the restaurant and the spacious lobby, mark the central entrance in a acute angle, and then fly out in a whirlwind wave in the direction of the garden above the conference hall. "This is a purely emotional choice, - Andrew Romanov explains - it comes from our wish to fill the intimidating environment with a softness that is always comforting to a man". For all its softness, the building is not at all devoid of its inner energy: the marquees throw themselves over the driveways, reaching out to the outside space as pseudopods of a science fiction creature that strives to spread itself as far around as possible from its nucleus.

The result is not only spectacular but also functional: in the rain, the cars and busses will be able to set their passengers down directly under the roof. On top of it, the whole roof of the first floor awning, according to the architects' idea, will be completely covered with grass - when viewed from above it looks not so much as the above-mentioned "fish" but rather like a fancy lawn or, rather, an exotic water plant upon which, like Thumbelina upon a leave of water lily, the architects put the slab of the hotel. (This solution definitely reminds us of the green awning above the promenade in an office complex in area that recently brought ADM Bureau the victory in an international tender.) This very slab itself, though, can also be likened to an offshoot of the fantasy water lily of the first floor, all due to the fact that the facades of the hotel itself are designed in the multicolored green key. The characteristic for ADM 3D metallic framework forms a regular grid whose equal horizontal cells alternate in a staggered order. Inside, each "cell" (in actuality, each "cell" correlates to a couple of rooms) is filled with verticals in a jigsaw puzzle way - the bright transparent glass of salad color, covered with thin stripes, falls into a diverse, but not chaotic, obeying certain rules surface, charged with green-grass-of-spring optimism. The ethereal geometric design all but conceals the horizontal intermediate floors that duly recede into background and do not weigh down the overall impression by taking part in the play of lines and color.

In all respects, the "green", nature-based image is skillfully enriched by a garden that, according to the architects' plan, is to fill in virtually all of the hotel's surrounding space (the parking space is also provided along the perimeter, though). The rectangle of the building is positioned in the middle of an almost-square site in such a way that on either side of it there was enough room left for lush vegetation: the fruit trees and blossoming bushes separated by paved footpaths and enriched by a small reflection basin whose triangular petal embraces the glass "nose" of the restaurant. The footpaths form sophisticated designs; the laconic wooden benches and small pillars of the streetlights are freely scattered around the grass - the landscape design got as much attention as the architecture of the building itself. The building and the garden are inseparable, just like a French castle and its inevitable park - they are the continuation of each other, and they play one and the same tune: the garden "walks in" through the glass walls, and, even when viewed from above, it remains the main context of the hotel - the characteristic sea cottages receded into the background and become of little significance. Such careful treatment of the landscape and many other things that can all be described by the almost-outdated term "improvement", has over the recent years become the trademark quality of ADM projects. On the territory on office centers they experiment with the paving, street furniture, and effects of nighttime lighting. They set up cafes on the roofs, plant trees on balconies... In a nutshell, they surround their buildings with oases of comfortable environment, inevitably drawing it down to the tiniest tree leave. Here, in the city, the oasis is quite appropriate; anyway, it is common knowledge that hotels, especially the seaside ones are build exactly in such a way - with a garden and a swimming pool - but it rarely is the case when the nature and the architecture really meet each other halfway. So, if the commissioner, as Andrew Romanov shared with us, wanted to get a modern European-standard building, free of any historical or national allusions, then the task is fulfilled. The building got quite a European "face" that looks over the with calm dignity. 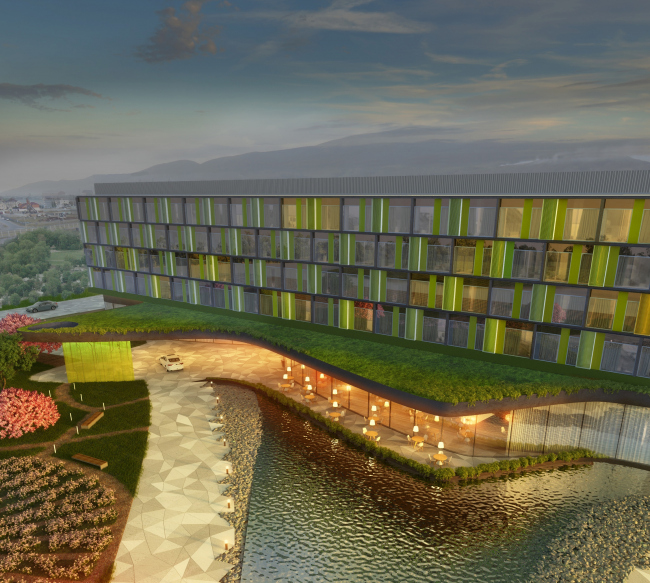 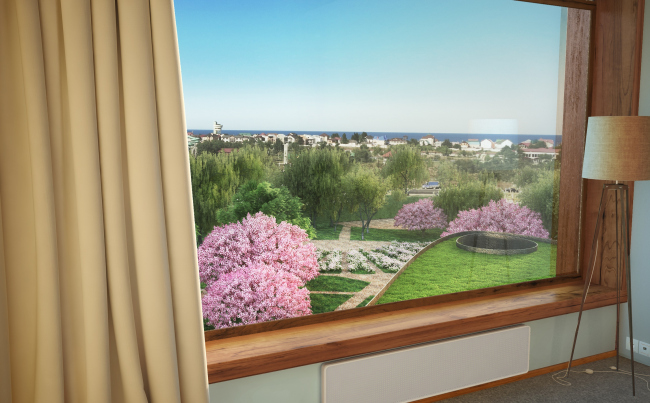