Diversity within the Bounds of Tradition

Developing a reconstruction project for the settlement of Rubin Estate, architect Aleksey Ivanov paid special attention to the quality and the merchantability of the future real property units.

The settlement, located away from Moscow Belt Ring down , got into the hands of "Archstroydesign ASD" almost completed. It had roads in it already, and the houses were built up to the roof. The mansions were supposed to get a chalet-like design, and their total area amounted to nothing more nor less than . Over the construction period, however, the chalet fashion went completely out of style and the settlement turned into an illiquid, never reaching the stage of being put into operation. The developer sold it to another investor who at once started remodeling and re-branding it. This is how the settlement got the proud-sounding name of Rubin Estate - and Aleksey Ivanov was invited to work on changing its image. The work on the reconstruction project started from reconsidering the master plan. On the layout, the territory of the settlement looks like an elongated rectangle, one of its narrow sides adjoining the highway. Its central part is described by the smooth loop of the central road, along the inner and outer perimeter of which the houses stand. The challenging part was the fact that the houses were placed more than freely - in fact, the whole settlement was "cut" into private property plots, so no landscaping of the territory was planned, let alone creation of some public area. The architects moved one house closer to the edge of the settlement - thus in the base of the loop there appeared a free space that was used for the creation of a man-made creek, "bound" with walkways and picturesque bridges. And, even though this creek is located not in the exact center of the settlement but closer to its farther boundary, it doubtlessly becomes the settlement's centerpiece and the free space that defines the image of the settlement giving its inhabitants the opportunity to go for walks inside of it. The architects corrected the plans of the estates as well, giving them ostentatiously different shapes, which brought some extra diversity into the settlement's panoramas. Totally, 24 houses were to be reconstructed - which included changing their square footage and the color solutions as well. Here the architects also found themselves in very cramped conditions - they were to use the already existing basements and bearing walls, in fact, "dressing" the existing framework into a new shell. In every case the reconstruction was performed at the expense of complete dismantling the roof and the second floor as well - at some places it helped decrease the overall area of the cottage, and at some places it helped, on the other hand, increase it by adding an attic floor to the two-story volume.

"Only a few years ago I was the biggest advocate of the mono-style architectural solution for the cottages within the framework of one settlement; it seemed really important to me that I should create the well-balanced environment with a unified style of its own, - Aleksey Ivanov shares - Now, however, that the market is over-saturated with offers of such kind, it makes more sense to offer the buyer a small but diverse environment to live in. The diversity of architectural solutions lowers the risks of the reign of subjective taste at the same time widening the circle of your potential buyers". Speaking about "diversity"' though, the architect means, of course, not the entire range of all possible solutions one can think of, but a sure-fire combination of two or three most popular ones…

In this particular case, the architects made the settlement unite two styles: as one of the two prototypes, the architecture of Tuscan renaissance was chosen; the second source of inspiration was Wright's "prairie house style", the world's universal commercial success. Conditionally speaking, the settlement got houses that were more on the up-to-date side and the houses more in the European tradition that will be closer to those who are into Old Mother Europe. "What is really important to me is the fact that both of these solutions can be described as chaste, good quality, and they go well together, complementing each other" - the architect explains his choice.

Within the bounds of each "style" the architects developed 5-6 types of houses, different not only in square footage, layout, the garage, and the terrace area but also different in the set of decorative design solutions. The houses that Aleksey Ivanov calls "Tuscan" got open galleries on stone pillars, and flattened arches. As well as round windows and Palladian (Serliana) windows - rectangular openings with an arch on top in the middle, first described by the architect of the XVI century Sebastiano Serlio and named after him. "The attractiveness and the presentability of these houses is enhanced by massive walls and the solemn entry portal, the use of natural materials and the soft natural shades of color, which gives us the right to completely forego the idea of decorating for the sake of decorating and not follow the trend blindly in this sense", - the architect says. In accordance with the Italian theme, the entrance part got a steeple-like square bell tower. The second part of the projects that pays homage to the memory of "prairie house" style, lays stress on the horizontal rather than the vertical. A little bit more gently sloping and far protruding pitches of the tile roofs, as well as the more dramatic combination of white stucco and dark bricks are the characteristic traits of this group of projects. Placing their bets on the theme of reminiscing about two historical epochs let the architects achieve the diversity that they were after. Behind the openwork fences, there is an alternating array of galleries and arched porches, and the dark and the traditionally red bricks. The houses are turned to the observer at different angles, and their silhouettes, sometimes modest and sometimes fancy with the towers, keep one's eyes from getting weary. The conservative structure of bricks and stucco, the large but not grotesque windows in the conservative light-shaded frames, the balanced proportions of the volumes - all this creates the feel of reliability and comfort, while the creek and the mini-park make the space of the settlement look a little more friendly and attractive. All this, coupled with a rather large "fork" in the area of the houses - 450 to - must make the settlement attractive to the buyers. Which is already done - the houses are selling quite successfully. 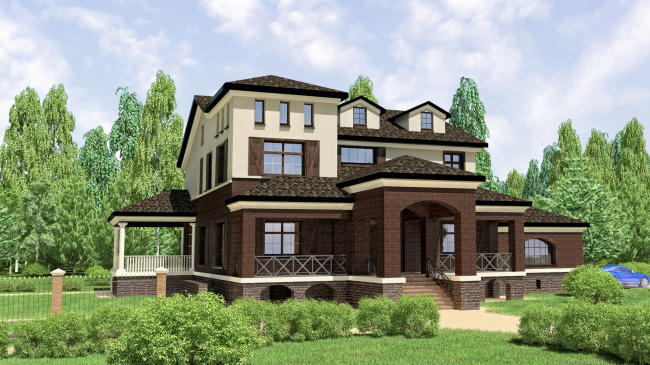 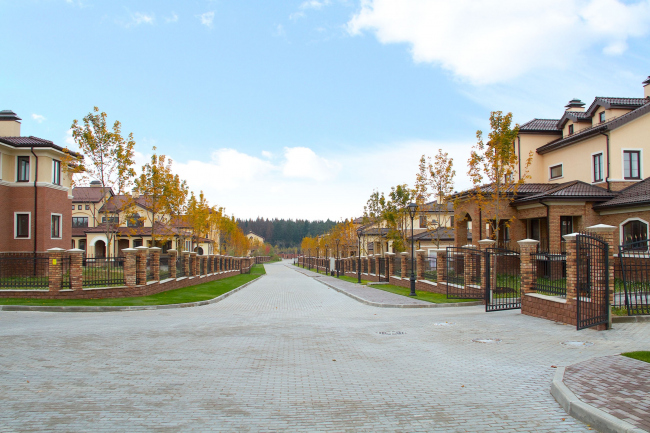