The place that now sports the new wooden house with a wide terrace and open glass facades, has always been called "Hole 10" by the keen local golf players. This site of the land has a slight height difference; on one side it borders on the woodland while on the other side it is skirted by the green blanket of the golf course - so naturally all the balls knocked off by he payers outside the field, have always ben ending up right here. And it is not surprising that when he was commissioned to build a residential house here, Totan Kuzembaev decided to put a spin of "Hole 10" not only in the name but also in the very architecture of the new project. The original project provided for a gently sloping green roof that was meant to simulate the slope of a golf course. In the center of this roof, the architect even planned to make a hole as real as it could be - so as the ball sent here by a faulty golf player would not get lost somewhere on the property but would roll down the special chute into the hands of the owners of the building. This beautiful idea was never to leave the paper though, but the name of "House Next to Hole 10" did stick. While the “hole” as such was ultimately not included in the project, the close vicinity of the golf course played the key part in its development. In particular, it determined the orientation of the house on the plot - in order to protect it from accidental ball hits, the architect stretched an openwork steel net along its south border, and turned the main facade westwards, farther away from the courses, and at the same time making it overlook the building of the golf club itself bathing in the trees of the woodland.  Such configuration of the volume gave the architects an opportunity to also make a cozy yard next to the house, at the same time keeping all of the existing trees intact. The building itself, with its almost perfectly square layout, presents an example of architecture that is austere and laconic. It was also not by chance, incidentally, that the rectangular volume with a single-pitched roof appeared here - according to Totan Kuzembaev, it is meant to remind people about the cafe that was here way back under the Soviet times. The new house even repeats the proportions of the building that once existed, its dimensions, and, to some extent, its architectural solution - for example, it "borrows" the glass facade, hidden under the awning of the sloping roof - but it is made out of the materials of a far better quality and far more ecologically friendly. "House Next to Hole 10" sports an awning over the open terrace that also serves as the patio where barbecue parties can be made. The array of elegant columns skirting the edge of the wooden floor of the terrace marks the conditional boundary between the building and its natural environment. The small partition made of wooden strips, placed in the center, makes this boundary more palpable - and at the same time this is the only screen that conceals the inhabitants' privacy from prying eyes because the panoramic glass of the facade unsuspectingly opens the residential space of the house to the picturesque woods. Beyond the array of columns, the slope takes a sharp turn downwards, thanks to which the house looks taller and more elegant, even though there is only one fully-fledged above-ground story in it (there is also a basement floor and a loft, though). The facades are finished with tinted veneer sheets by the Italian company "Pagano" that is a long-standing partner of Pirogovo Resort. Speaking of the advantages of this kind of finish, Totan Kuzembaev notes its incredibly warm texture that the Italians give to the wood, and its great consumer properties. To the left of the main facade, there is the drive-in ramp that leads to the basement floor where the garage, the gym, and the sauna are situated.  The first floor is occupied by spacious guest bedrooms, a dining room, a kitchen, and a large living room with a void. The loft, which is accessible by a compact stairway, can be turned into a library or a study. It should be mentioned that the authors looked to come up with a planning solution as flexible and as relaxed as possible, also capable of changing in accordance with the inhabitants' needs. This house was originally intended for sale, so the architects were not restrained by some demanding commissioner's exact requirements - as Totan Kuzembaev shares, the designers really enjoyed the freedom of action that they were granted, at the same time trying to use the space as efficiently as possible. Hence, for example, the large bedrooms for children (over 30 Sam each), the single living room with plenty of light, and the huge window openings instead of dead walls. This same idea to leave the future owners with maximum freedom of creative thought accounts for the almost Japanese minimalism of the indoor solutions. These are mostly white walls and plaster slab ceilings, traversed by girders of dark wood. But these only serve more to enhance the yet-unspoiled by the decoration features of the indoor space that is filled with light and harmony of proportion. The furniture and the designer elements that presently form the indoor decoration are provided by the manufacturing companies and are, just as the house itself, also available for sale. The future owner will be able to decide for himself or herself how to fill in his or her house, and for some reason it seems that he will inevitably prefer the austere and stylish simplicity that goes so well with Totan Kuzembaev architecture.
Text by: Totan Kuzembaev, Alla Pavlikova
Translated by Anton Mizonov 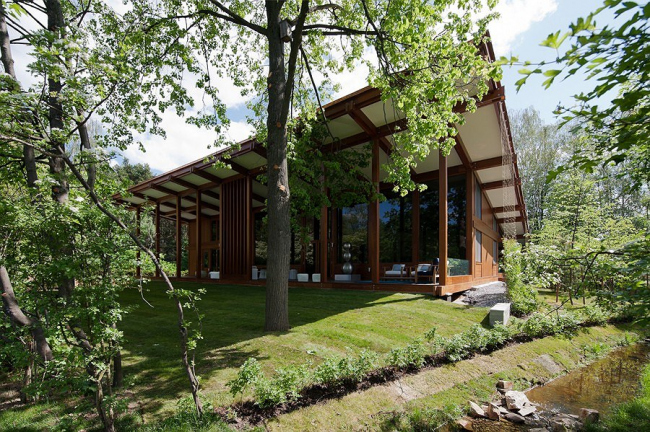 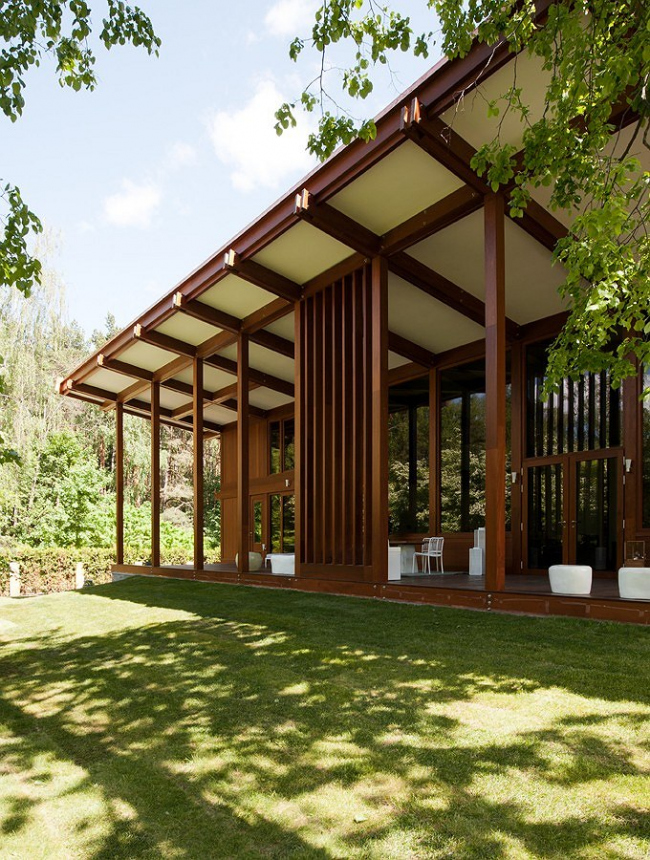 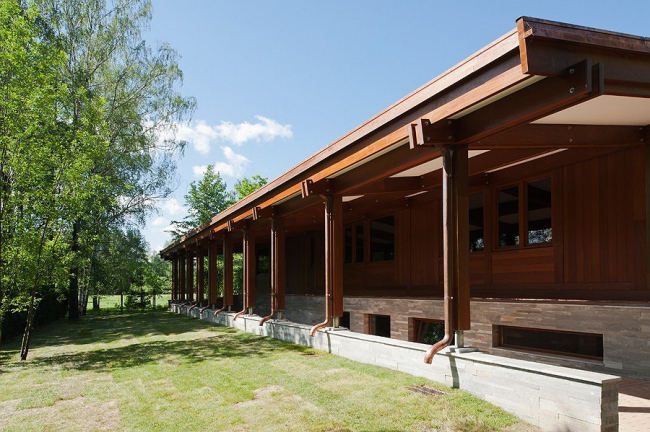 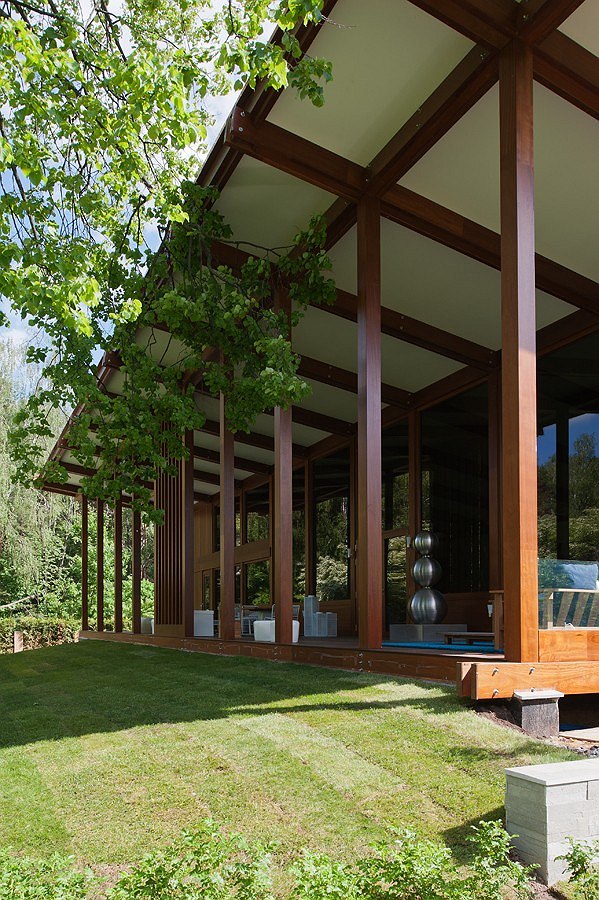 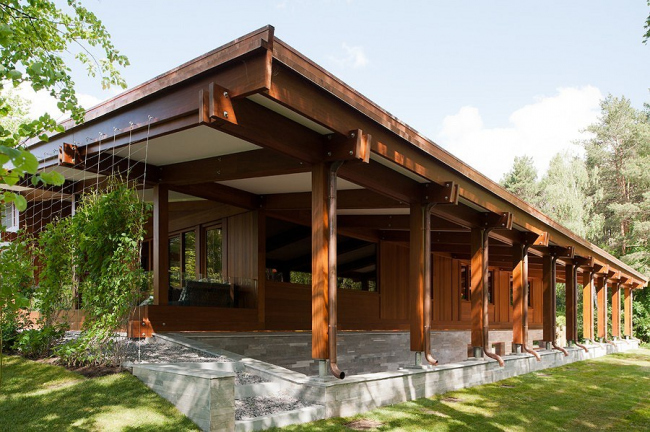 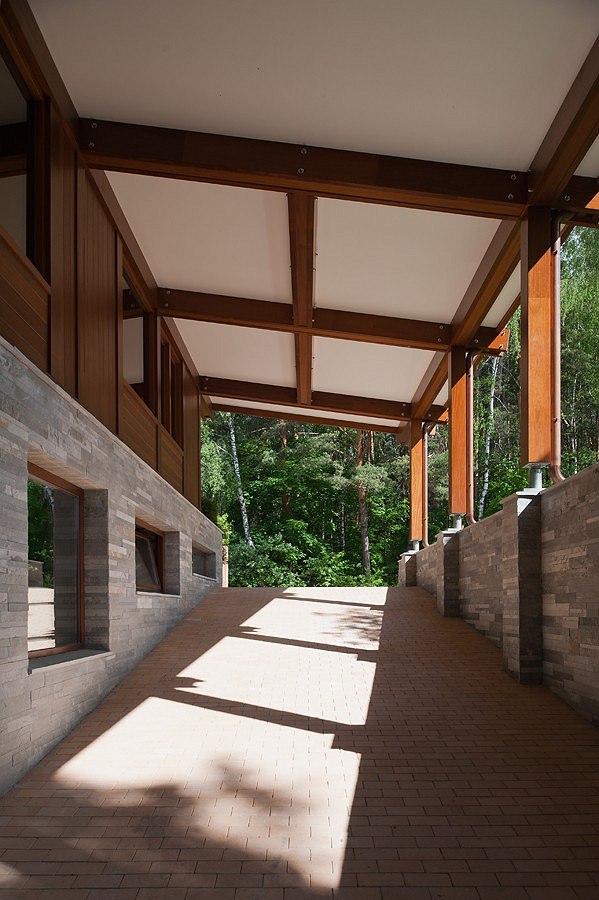 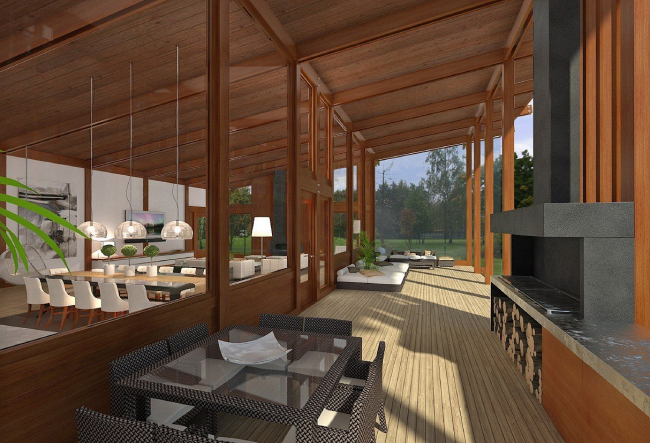 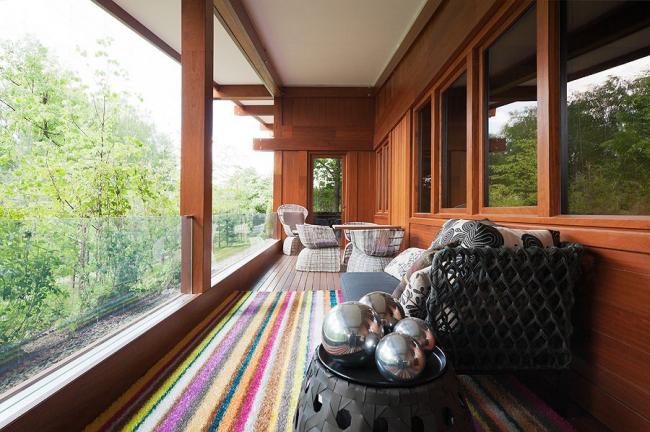 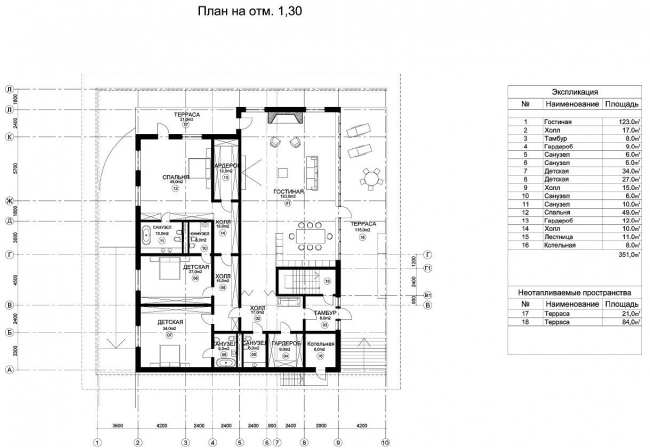