On of the projects that won the bid for Skolkovo’s “Technology Park” residential area is the townhouse quarter by Vera Butko and Anton Nadtochiy. It looks very much like a sculpture of some giant mechanism and, obviously, echoes the profession of its future inhabitants.

This March, “Atrium” architectural bureau became one of the ten winners of the second stage of the competitive bid for building “” (D2) district of Skolkovo Science Town – this means that this project is going to be implemented. The subject of design was one of the 15 residential areas whose layouts, according to Jean Pistre’s idea, look like circles of various sizes with residential premises of a certain typology inside of each of the circles. Vera Butko and Anton Nadtochiy, participating in one ’s most prestigious tenders of recent years, from the very start decided that they would design townhouses out of all possible things. Specificlly because this task was relatively new to them: Vera Butko and Anton Nadtochiy’s portfolio has in it a lot of private houses and apartment buildings, while the architects have not yet worked with what stands in between. Thus the architects deliberately made their task more difficult by choosing a typology that was new to them. Otherwise the task was made more difficult by Jean Pistre himself who proposed to design four-floor townhouses, each with two two-floor apartments on top of one another.

In their project, the “Atrium” architects from the very start accentuated Jean Pistre’s two-tier compositional idea: even early on, in their first-stage project each building consisted of a pair of two-storey volumes, put on top of one another. This is why the mini-town became a two-level one, with “upper” houses getting landings, grass lawns, and even hanging pedestrian footpaths of their own. Also, the first-audition project already included splitting the mini-town in two not only vertically but horizontally as well: into houses with sharp corners versus houses with rounded ones. This theme graphically reflected the main message of the entire “”: as we remember, Jean Pistre made the working office part orthogonal and broke the residential part into circular quarters that the bidders actually worked upon.

In the final second-audition project the architects were able to keep all the named themes, tightly packing them into the area of the small circle. One half of the “islet” is formed by the “horseshoe” of the first tier: the array of brick-faced two-storey townhouses, arching in fan-like fashion along the perimeter of the land site and pierced with two narrow pedestrian footpaths. On the ground floor, all the entrances, lobbies, and staircases are neatly grouped on the yard side while the large windows command the forest view. The roof of the “horseshoe” is going to be green, and upon this roof the architects placed the three “tower” houses – the streamlined, almost cylindrical, volumes. Their shape has a technogenic look: the mismatching outlines of the stories resemble fragments of some mechanism that reflects Skolkovo’s innovation theme.

The two other four-storey towers were placed onto the other half of the circle, this time without the "brutal-looking" base: they also have two tiers of residential premises. Their tall rounded volumes flank the main driving entrance to the territory of the area - not unlike in some medieval castle. What can serve as the wall of the castle in this case is the horseshoe-shaped brick building. This wall is not totally blind, though, the colors of the place are quite lively, and the atmosphere is far from medieval - you may get a fleeting memory of some guided tour to an old European city, which will sure put you in a positive state of mind.

Apart from the residential quarters, the specifications included a "children's club", a library, and, of course, a parking garage. All of this the authors of the project placed in the central part of the "islet", turning it into a man-made hill. This hill is in effect not a hill but a few buildings with a gently sloping green roof that simulates the natural relief. Along the perimeter, closer to the townhouses where the green roof goes down, the architects placed the driveway and the parking garage, in the center, around the light well of the courtyard - the library and the "children's club". The whirlpool of walls inclined towards the sunshine, lets the premises get enough of sunlight. 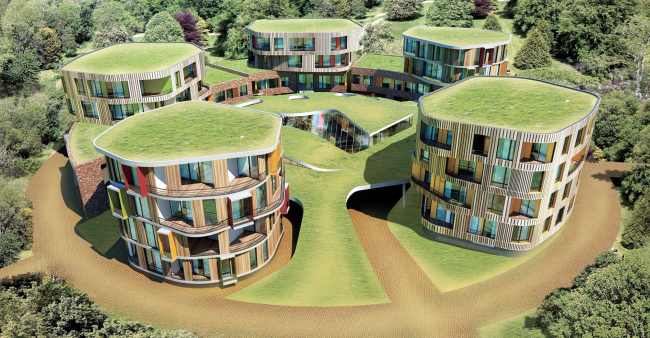 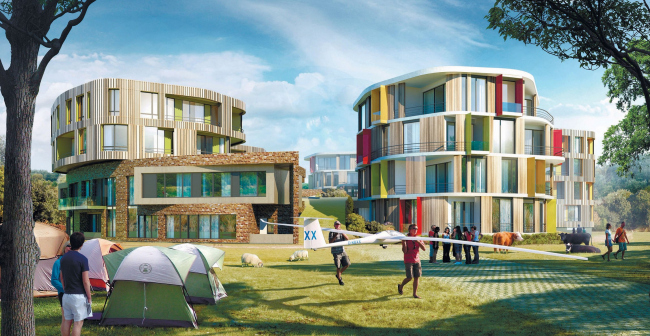 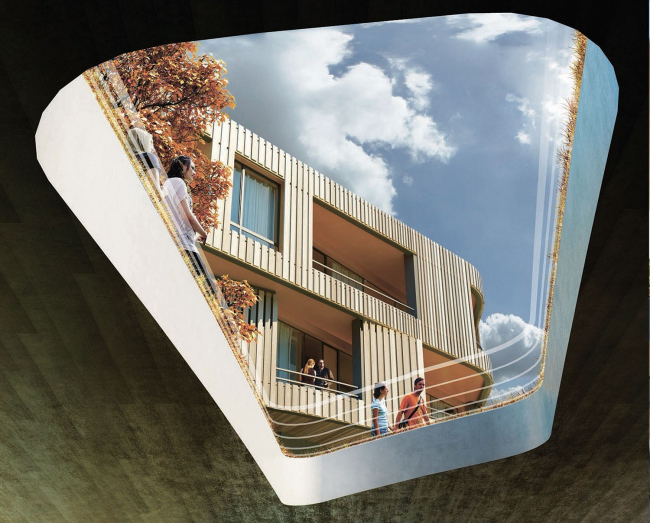 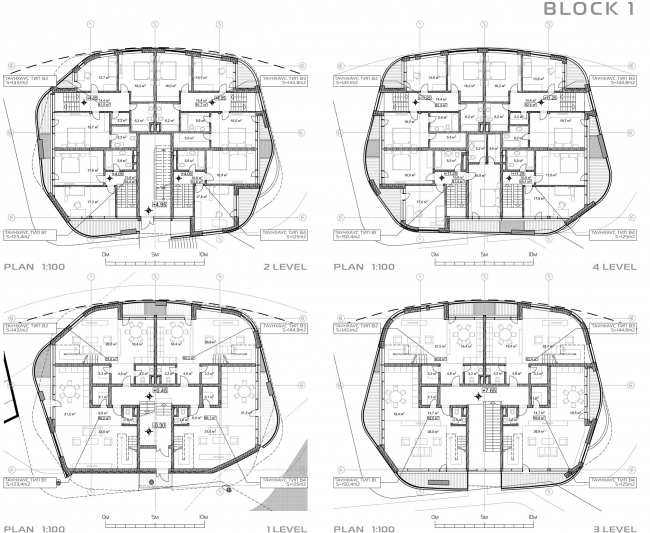