Illusive simplicity that has plenty of nuances, details, gives certain attractiveness and charm to the house.

Designed by ADM architects not far from ‘Belyaevo’ underground station, comparatively small building has the three different functions. There is the garage for 253 units underground, and there are fitness-center and offices in the other two buildings. This is quite typical and even banal context for Moscow. Most constructions here have been developed this way: something useful for the city - a theatre or fitness center, and ‘investment construction’, space cost-effective for the investors, is built on a single site. The first one guarantees construction license, the second gives profit to the investor.

Sometimes these parts – the city and ‘investment’, are in separate buildings, sometimes are united in one, or also they can be mixed. Here it is peculiar that the functional structure of the building on Profsouznaya suggested the main idea and vividly echoed in the image. Moreover, it reflects its function, smartly developing the idea of classic modernism rule ‘inside-outside’

The garage part is placed underground and is not seen. The two upper parts – open for public fitness, and offices for rent have separate exits, so that visitors of both possibly wouldn’t meet. They are one as a building, but outside it is obvious it consists of the two stereometric forms with different characters, placed at right angle, so that one cuts through the other. Spread on the ground the one-storey fitness center – its horizontal outline is emphasized with strict diversity of thin strips of dark facing – has weigh and clearness of basalt. The second volume, for offices, large and ‘softer’ in every meaning - it’s light facing consists of vertical plates, palette of gray, and windows, though in straight horizontal lines, change there height from narrow to wide creating a kind of dance. It is not surprising that the ‘soft’ building is cut through with the ‘tougher’ one, hanging above in zigzag way, imitating a huge console.

It is really hanging above. Classical avant-garde in such fashion would more likely imitate sprouting and fusion of the volumes. Everything is a little different in the project by Andrey Romanov and Ekaterina Kuznecova – there is a way appears in-between the main figures. The stripe, that goes deeper and that has absolutely different texture – is the glass, covered with thin, vertical wooden sticks painted dark-orange. They look very much like lines of magnetic field lines – as if the upper light volume is hanging over the dark one, that is spread on the ground like a magnet.

The line of broken parallelepipeds, sharing of functions, forcing apart the streams, the garden that will be on the roof of the fitness center refer us to searches of ‘classical’ avant-garde; and materialization of the ‘magnetic field’ between the two volumes not only bring us to the present day, but also reminds of the present-day ‘contextual modernism’. The thing is, orange color of the deepened stripe-agent into the body of the building is the reaction of the building on the closest surrounding. In short, the territory of ‘Profsouznaya’ is green, but too dull – there are lots of five-storey buildings and panel boards around, somewhere three such round corners of the prospects. In the yard of one of those house there will be constructed the new building – its red-orange ‘throats’ of staircase landings suggested the architects the idea of decoration their ‘zone of stereometric strain’ the same way.

Besides, the two volumes make the corner in the shape of ‘Г’, turned towards the closest panel and thus the new building softly shields its own yard from the fitness-centre – for citizens, completing it with the mentioned before small garden on the roof. So, not going any further than rectangular volumes, the architects not only direct a delicate play between them, based on alternating of contrasts with nuances, gently interlacing it in the context of the block-panel surrounding, but create on ‘their own’ site a scene of well-thought and modern urban environment. 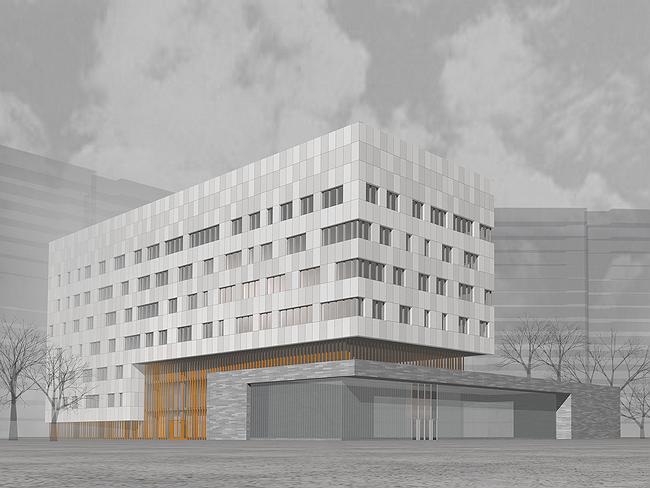 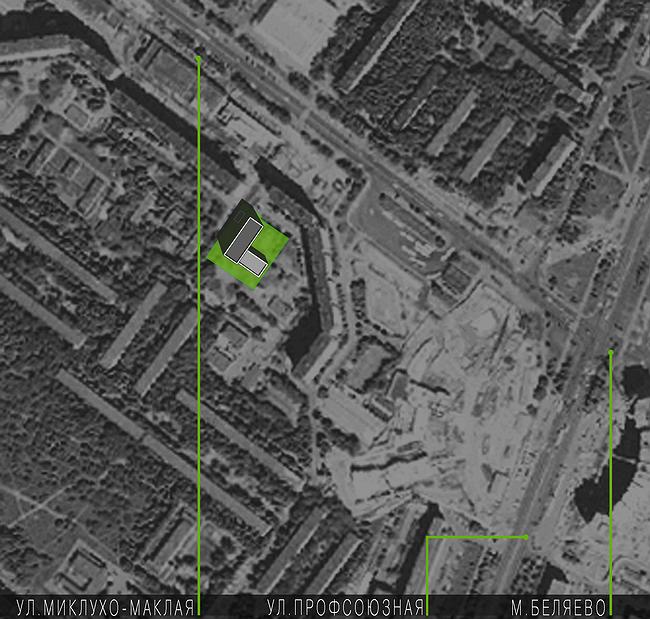 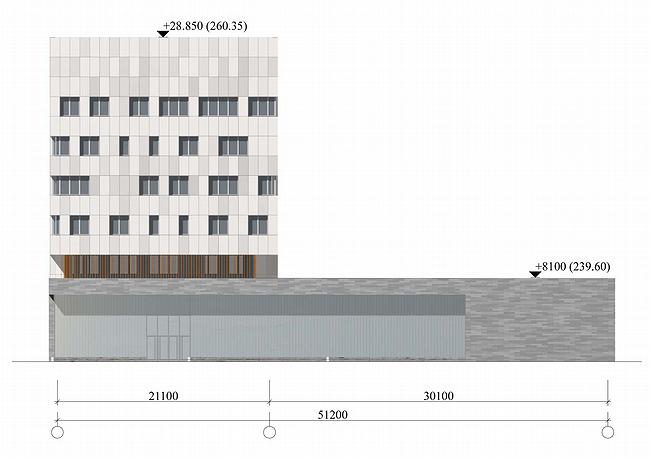 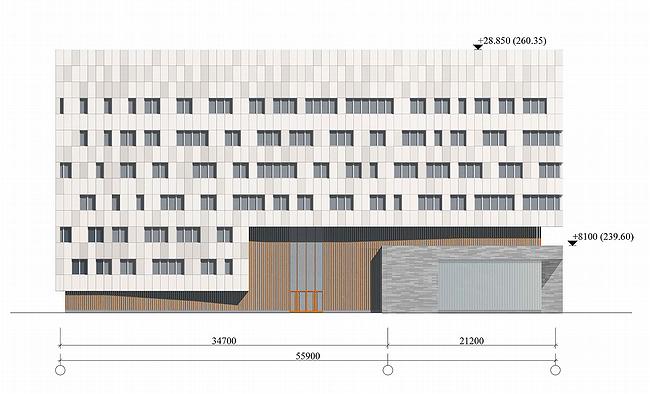 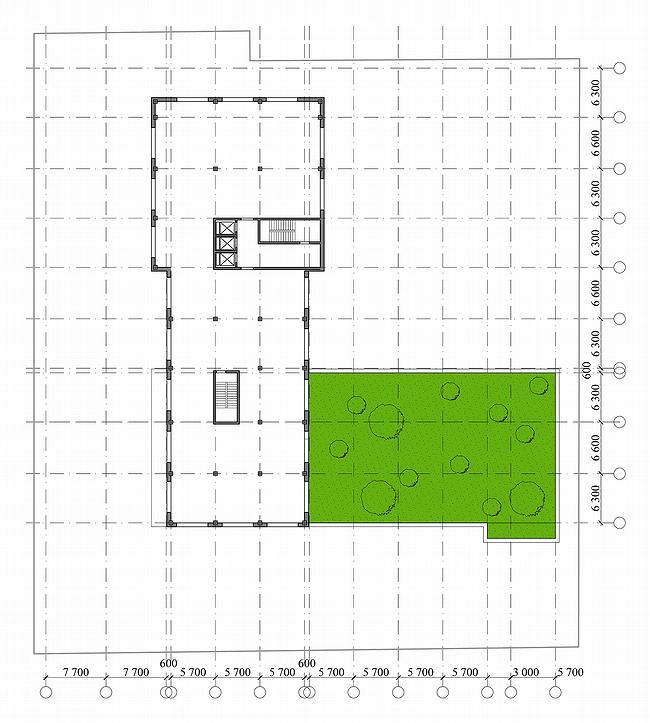 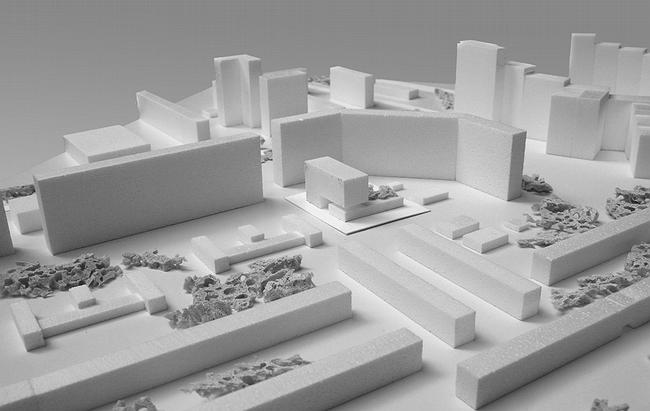 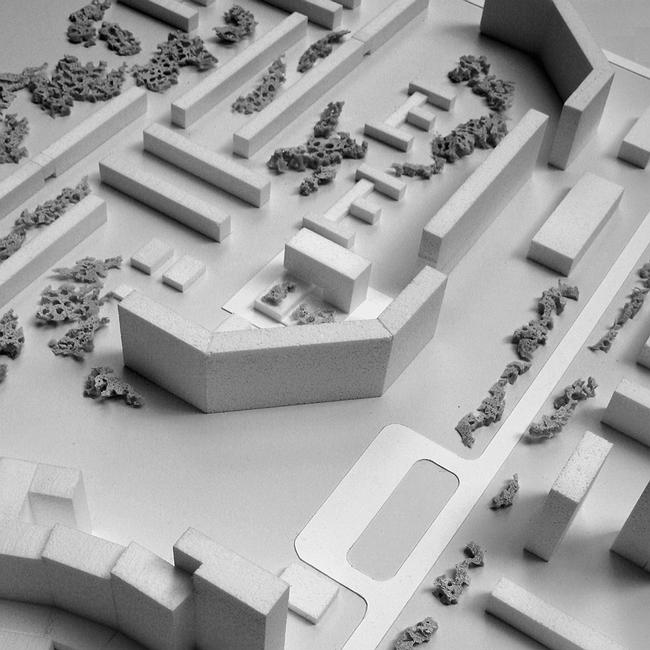