Totan Kuzembaev: When I work on a project, I trust my instincts

Today we are speaking to Totan Kuzembaev, one of Russia’s most popular architects, who is famous not only in this country but world-over as well. This year, his architectural studio celebrates its 10th anniversary.

Archi.ru: Initially, you got your first recognition as a “visionary” architect that won numerous “visionary architecture” contests. What do you think of the contest planning experience that you got back in those days? Totan: Visionary architecture (called “paper architecture” in Russia – translator’s note), doubtlessly was a great training both for my hands and for my brain. This is where I learned to showcase my projects at their best, work quickly, put aside the unimportant, and combine fantasy and reality. And, generally speaking, back in the 80’s, those contests were about the only way of creative self-realization. We realized back then that in the Soviet Russia nobody needed either or knowledge or our ambitions. Now the tables have turned, and even designing the interior of a private cottage you can explore your potential more than participating in a “paper” contest, so such contests do not mean that much to me anymore. Real opportunities are always more valuable to any architect. Archi.ru: So when the political situation in this country changed, you were finally able to launch an architectural studio of your own and finally get down to some real design work? Totan: Exactly. I am grateful to the Soviet regime for being there to give me the opportunity to study, and then for collapsing and thus giving me the opportunity to work. And I just hate it when people say that everything was “bad” in the Soviet Russia: every epoch opens up unique opportunities of its own. Incidentally, looking at the state our city is in, I can say that it is being developed many times worse than it was under Soviet times. When your city is primarily your “source of income”, so to speak, it is the worst thing that can happen to its environment. You sometimes cannot just walk or drive through it, let alone the aesthetical side of the issue. To me, squares for marching bands are still better than endless parking lots! Yes, we can blame the authorities for the deterioration of the city environment but their orders were to be fulfilled by architects, and such architects were there – this is what gets me! Archi.ru: Well, you were a whole lot luckier:at that time you were building the “ideal settlement” in Pirogovo settlement in Moscow area. Totan: If I thank my destiny yet again, I am going to sound a bit too repetitive, aren’t I? But that is true – I am thankful to have avoided taking part in what was going on. It could have turned out that I would also have built the glass monsters, and then would have been complaining to everyone that I was made to do that by “evil” government and all I could do was to save the silhouette. On the other hand, I also have a desire to work with large objects. My ambitions are still there – why not try and go for it? As for the Pirogovo project, we were really lucky to have such a commissioner. I had known him for a long time, actually - we had been doing some minor projects for him, and then he came to us and said that he bought a 100-hectare land site and that he wanted specifically us to take over the project. Initially he was planning to build typical rank-and-file cottages for renting, and we spent a long time choosing the right manufacturer of the ready-made houses, but we did not like any of the companies that we found. Ultimately, we decided to everything by ourselves, taking special care of the ecology and practicability. Our commissioner proposed to start the experiment from his own very home - this, of course, was almost reckless of him because back then we had virtually no experience in building wooden houses. Archi.ru: Ten years after that you are famous for one of Russia’s leading architects who are experts in wood. Totan: Truth be told, I wouldn’t go as far as to call myself an “expert” in wood. Rather, I just trust my instincts. The always come to my rescue in the situations when I lack the necessary knowledge – plus the “feel” of the material. To me, wood is still the kindest, the warmest, and the most “soulful” material. Archi.ru: Wood is there in your project to such great extent that I can’t but ask you this:which materials, besides, wood, are interesting to you as an architect? Totan: You name them! Iron, brick, stone! Plastic is also one of my favorites, I like it for its simplicity and practicality. I also like glass, even though sometimes it is prohibitively expensive. And the materials that I dislike are simply nonexistent. I enjoy working with any kind of material because each one of them opens up new possibilities for creation of new aesthetically valuable things. Thing is that, because of my reputation, I get the wood orders a whole lot more often – so sometimes I get really tired of working with wood all the time.
Text by: Totan Kuzembaev, Anna Martovitskaya
Translated by Anton Mizonov 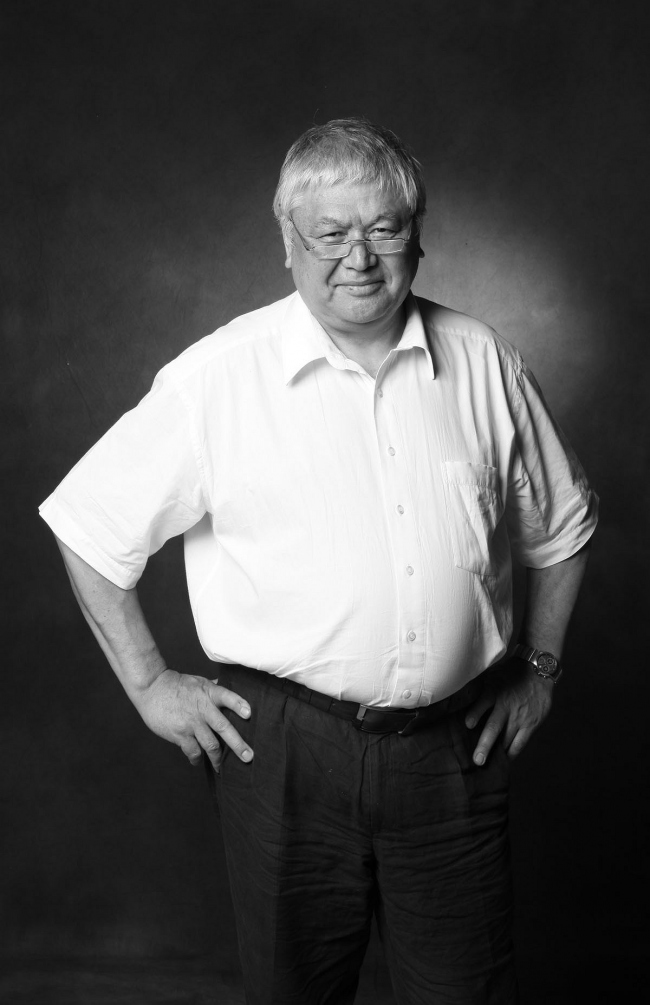 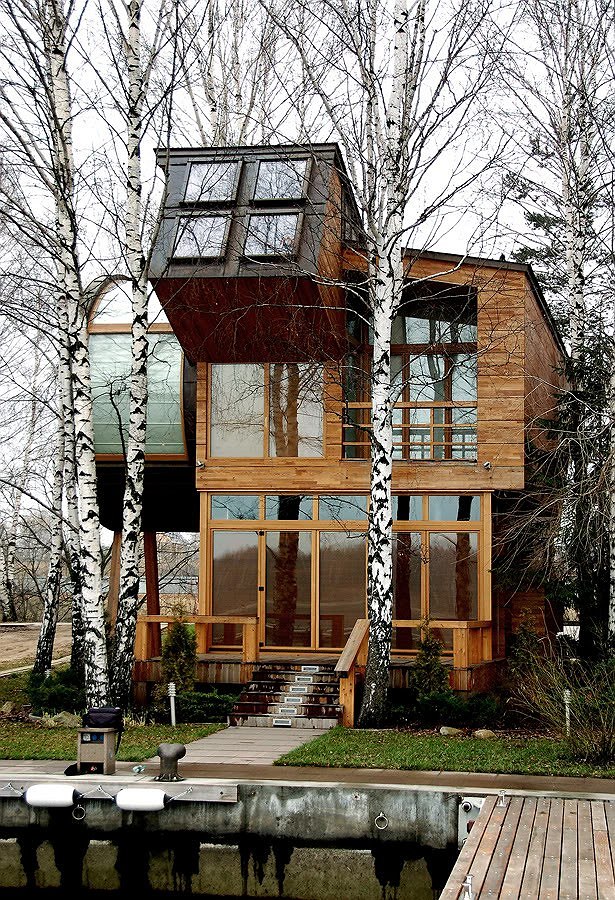 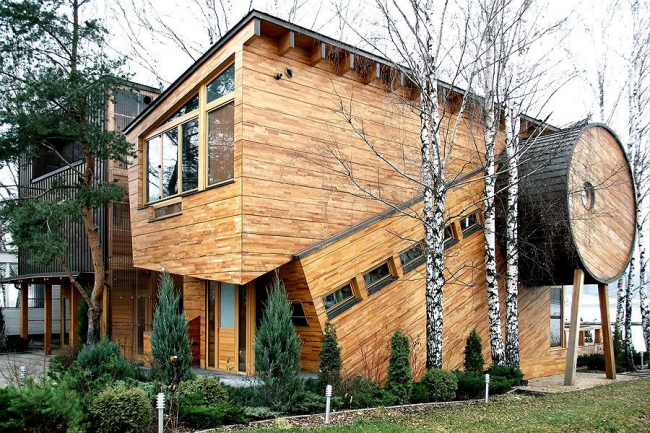 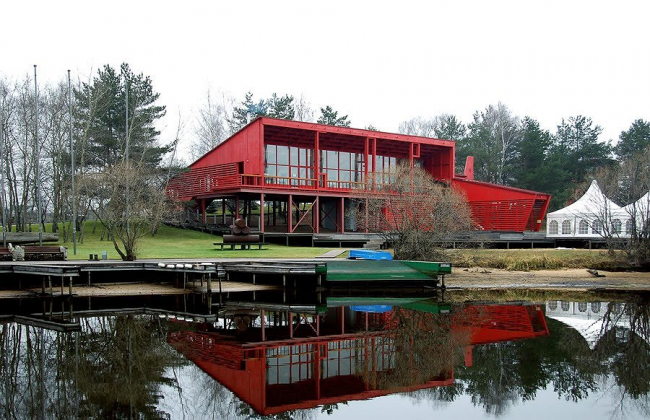 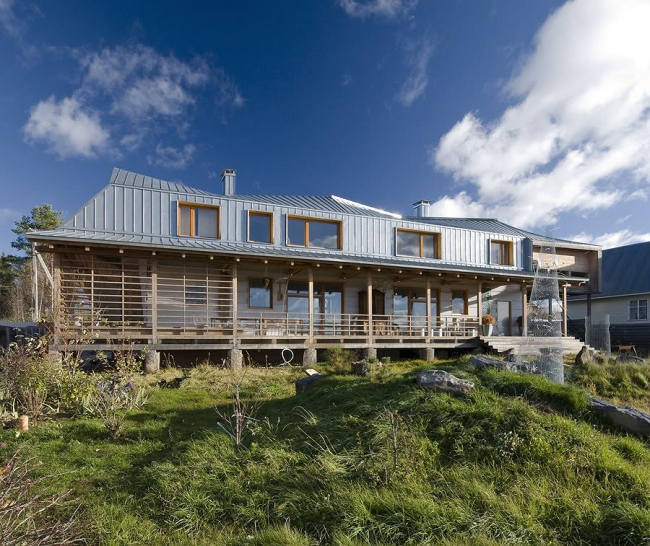 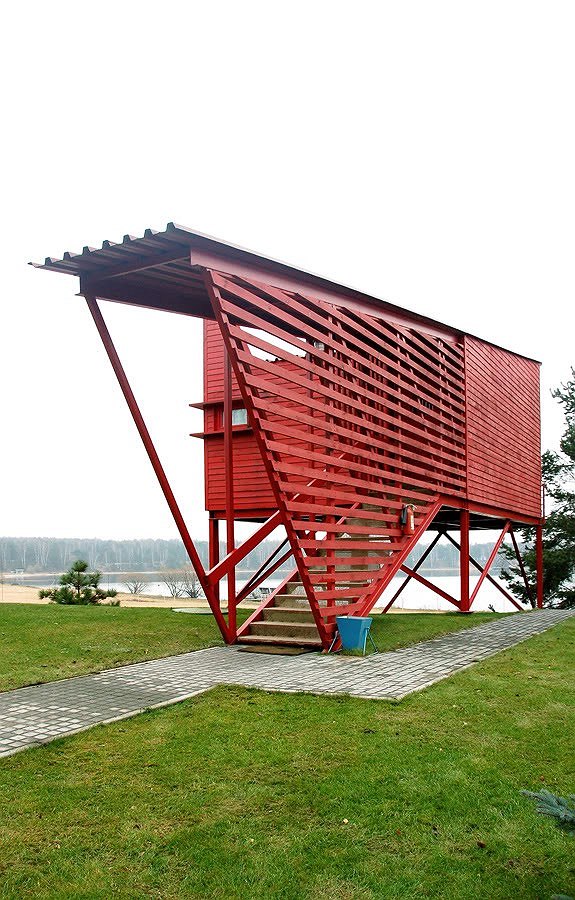 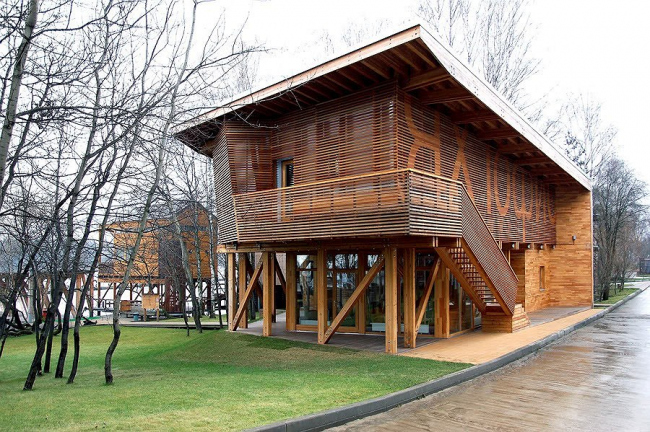 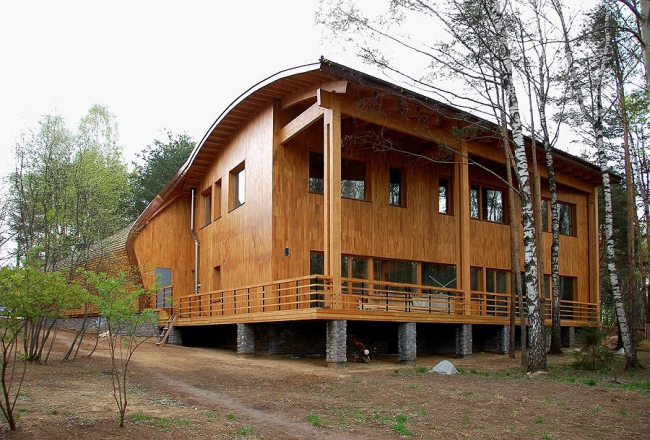 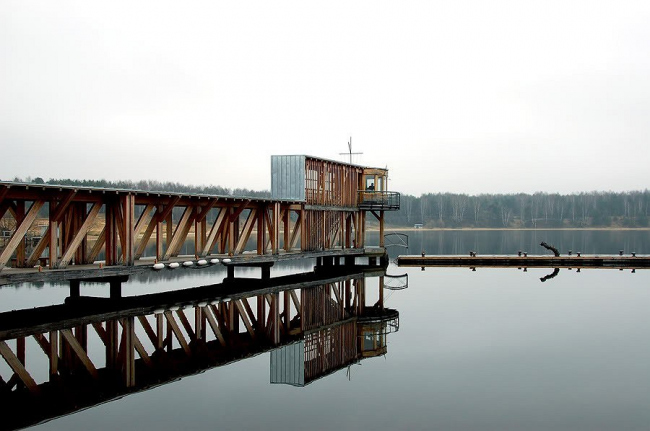 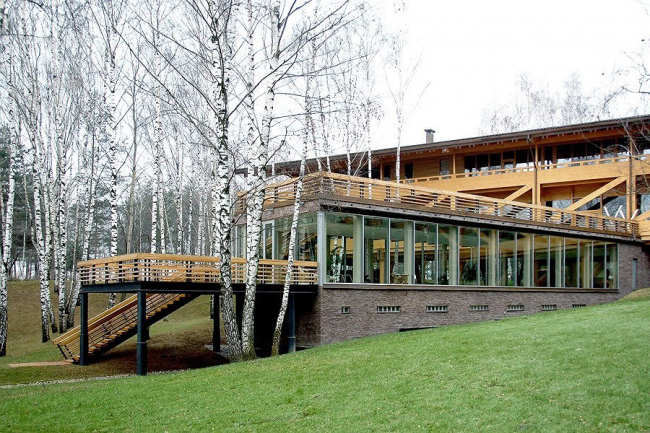 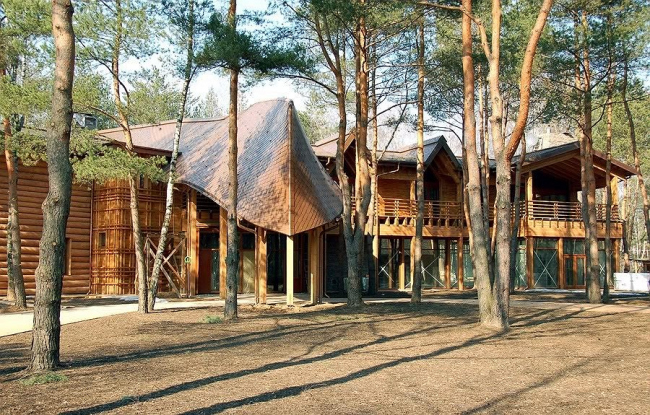 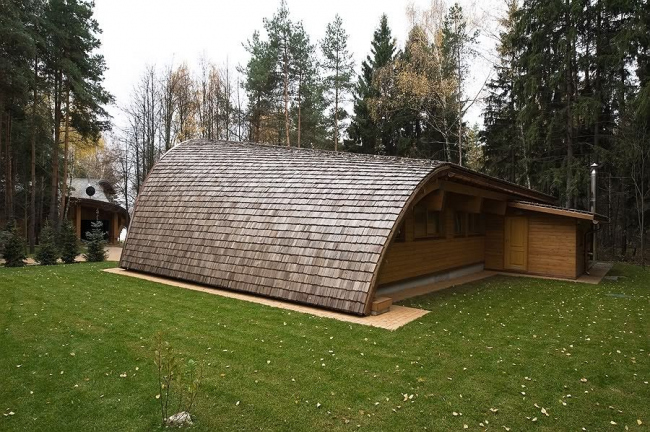 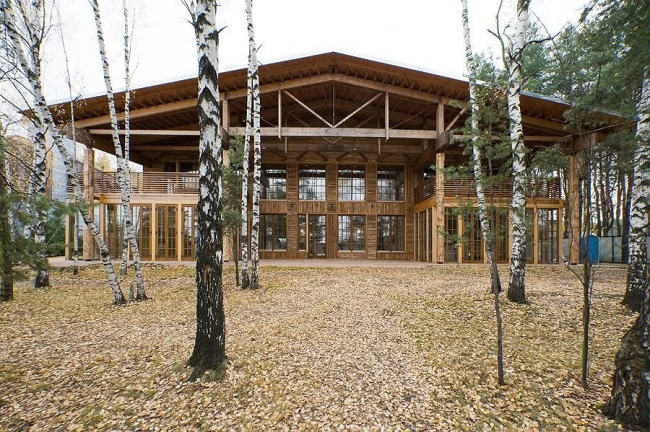 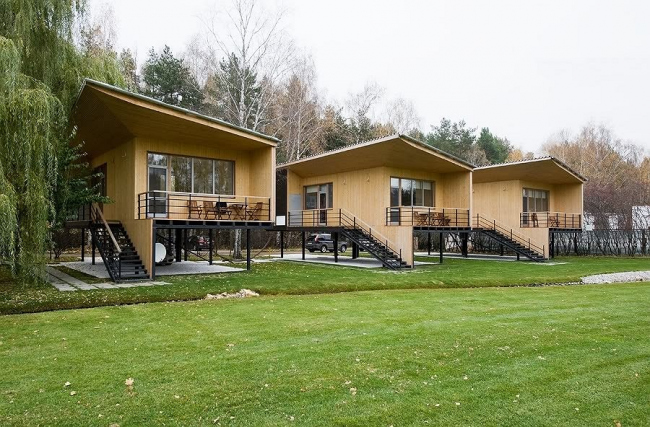 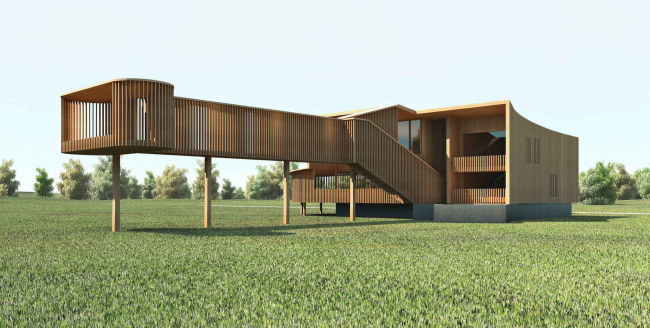