The project of changing the nizhegorodskayia Strelka from the loading port into a modern multi-purpose complex, which brings together the soft touch to the heritage and bold architecture, even a try to comprehend the place’s history, is theatrically building up the new urban area, surrounding the Alexander Nevsky Cathedral.

The Oka river divides Nizhny Novgorod into two parts: on the right there are high banks, gullies. There is the Nizhny Novgorod's Kremlin and monasteries. One of them is Blagoveschensky monastery, which is well seen from the bridge over the river. On the left side, the riverbanks are sloping. The area is relatively advanced; there is a railway station, metro, Gorkovsky Avtomobilniy Zavod (GAZ). And also between Oka and Volga, there is the Nizhegorodskaya Yarmarka on the Strelka, which has been here since 1817 replacing Makar’evskaya. That time A. A. Betankur, who had constructed Moscowsky Manezh, and also O. Monferan, who had designed Isaac Cathedral in St Petersburg, were engaged in development of the yarmarka. That time there were only temporary pavilions being built up on the Strelka. The permanent and stone yarmarka was placed a little more remote. Nowadays there only an empire style cathedral remained of it in the khruschevskie quarters and the ‘Main building’ that resembles GUM for those who come from Moscow. Today different exhibitions are held there under the label of Nizhegorodskay yarmarka.

The grand construction of the Strelka area was started in 1860, when according to the project by L.V. Dal, there was built the superb Alexander Nevsky Cathedral with five-domes roof and Alexandro-Nevskaya and Makar’evskaya streets were run along the Oka. That time the Cathedral was the highest one in Russia. And the architect was rewarded the title of Professor of Academy of Fine Arts. That was a grandiose project that became a kind of symbol of the town, just like the Kremlin, and also architectural and urban planning reminiscent of the Kremlin domed cathedral of the beginning of 17th century, where now Kuzma Minin is buried. Then, instead of the yarmarka the more significant feature of the town became the automobile factory. The town had enlarged with neighborhoods full of constructivism monuments. Strelka became the loading port. Nowadays, ships floating past have to ‘view’ the dock cranes that mostly got rusty, masses of some load, and only then ‘see’ – yellowy cathedral.

Nowadays they have decided Strelka needs to be reconstructed into a kind of nizhegorodsky ‘City’. The project by Jury Vissarionov is one of the concept urban planning suggestions. In my view, it has the two advantages: the delicate restoration touch to the Strelka’s heritage, first of all to the Cathedral. Then, despite that, the design suggested quite challenging and artistic plan, wrapped by radial-beam amphitheater around the Cathedral. Usually, either heritage or bold modern architecture, but here these seem to be combined.

Vissarionov project suggests also reconstructing not only the Cathedral, but also one of the very old streets with small buildings. This is the former Alexandro-Nevskaya Street, nowadays it is Strelka, laying along the Oka up to the Cathedral. It was L. V. Dal who has worked out the axis to the perspective with the Cathedral in vanishing point; the picture of it was used a lot for print on rare collection postcards. The architects go on developing it, creating a few entirely new rays that converge like fan to the Cathedral. One of them stretches up to the very ‘nose’ of the Strelka which is getting a little extended because of the construction of the new congress hall, partly hanging over the water, emphasizing the natural sharpness of the cape. In the similar way – like consoles over the water – the other three rays are continued, coming from the cathedral to the Volga bank. Along those banks continued hotels are projected, northern part of which are also go over the bank line. Like struggling for extra areas. But actually it is making the sight amusement to the hotel residents.

By the way, there will be different water shows. Taking in account that the complex is placed between the two rivers, that is quite logical. On the Volga, there will be yacht club, on the Oka side there will be park with cafes and restaurants ‘floating’ and hanging over the water on the thin supports. The project suggests the pool in front of the western façade. Along which there will be radial rays – canals, flowing into the pool. Thus, besides the street net, appears the duplicate canal net that charges the area with water and makes the walks nicer and has an interesting past history.

The case is that when in 1817-1822 A.A. Betankur was designing and building the yarmarka, he made the horseshoe-shaped canal around it that was getting water from the large Meschansky lake, in the neighborhood there was much of inner water, springs and lakes. In some way the yarmarka used the Betunkurov’s canal, but later on, after the reconstruction, in the end of 19th century it was buried, as well as most of the springs. The area remains damp, but got deprived of open water. The project by Vissarionov ‘obtains justice‘, letting waters out – his pool becomes if not straight but the significant successor of the Betankurov’s canal. Only it is a little northerly. In the center of the area there will be the horseshoe-shaped complex, in some parts overhanging the pool and canals. It makes a kind of the amphitheatre, surrounding the cathedral from the west. A little further from the Cathedral, the buildings are getting taller, developing into ‘dancing’ skyscrapers – the City itself. In the end, the theatrical composition is getting clearer - half-round complex turns into parterre, the artificial pool unfolds like an orchestra pit in front of it. And the full attention of the audience is directed onto the stage, where the Cathedral is the protagonist, acting on the back of the sky, park and juncture of the two rivers. 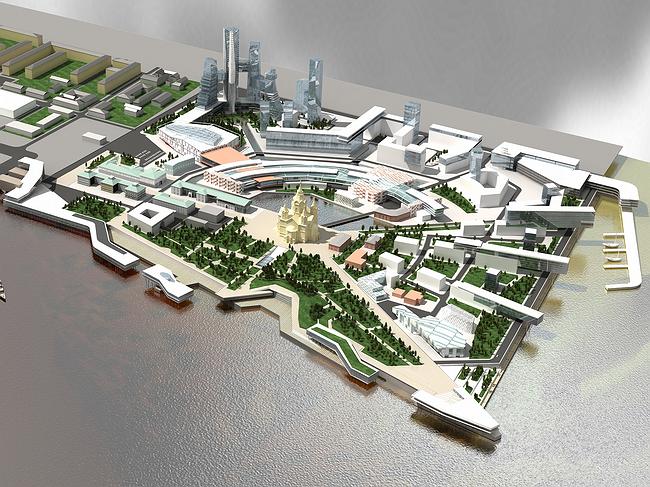 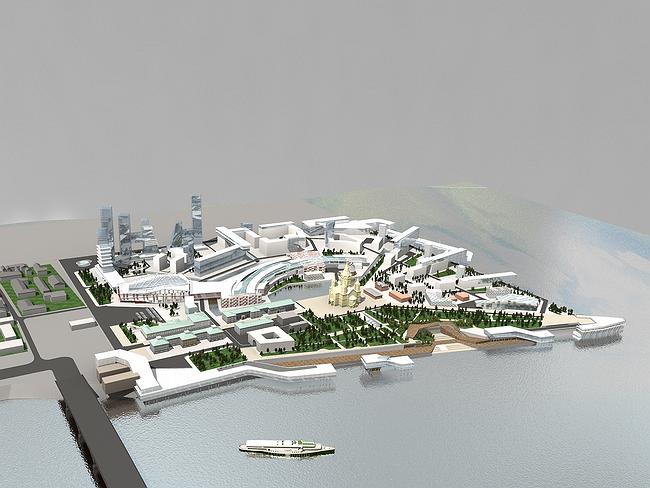 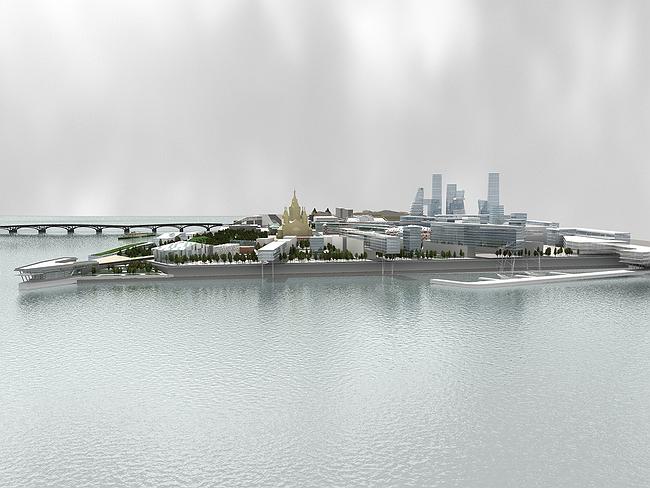 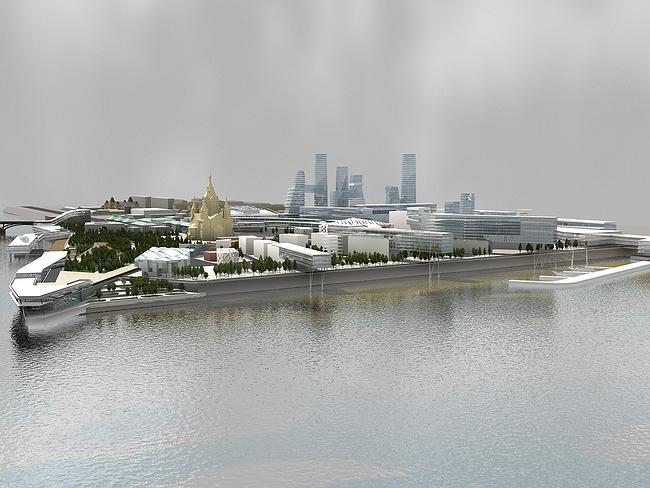 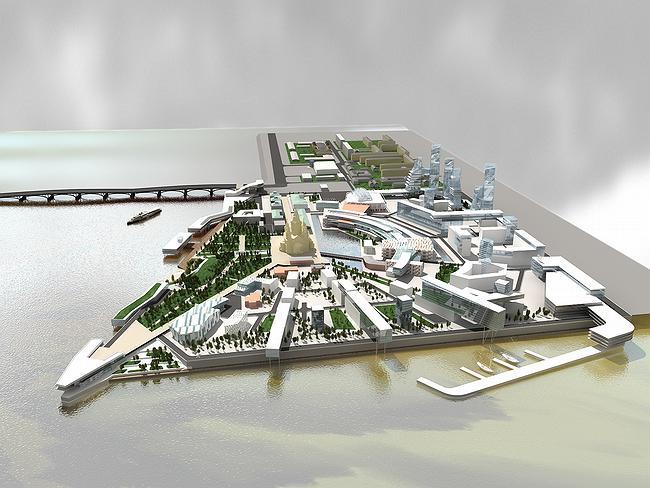 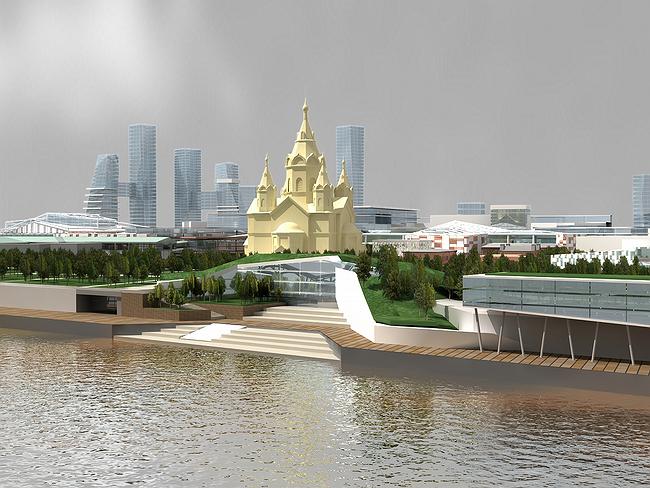 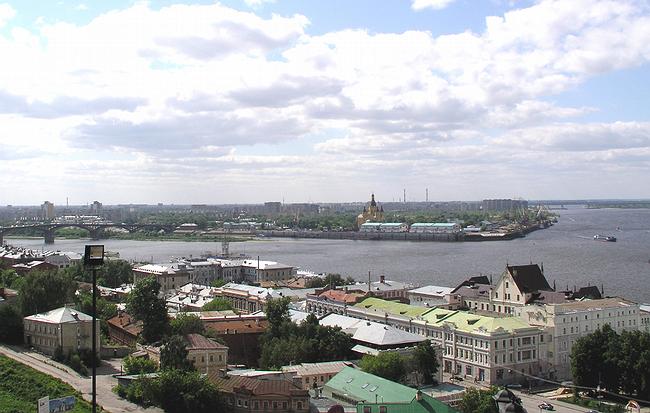 The view of the modern Strelka from the Kremlin side 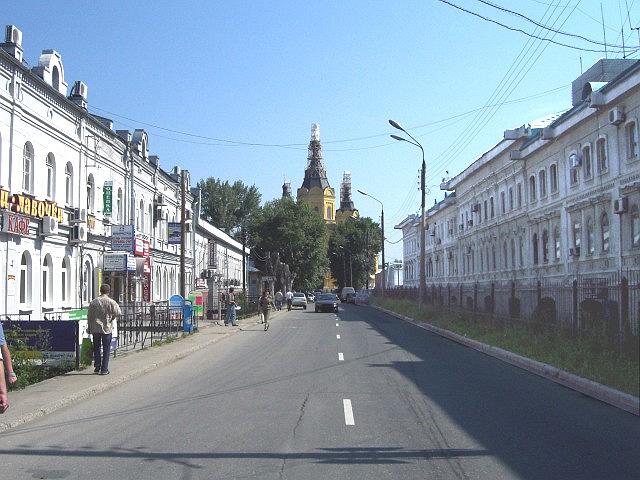 Strelka Street. The view of the Alexandr Nevsky Cathedral from the side of the Main Building of the Nizhegorodskayia Yarmarka 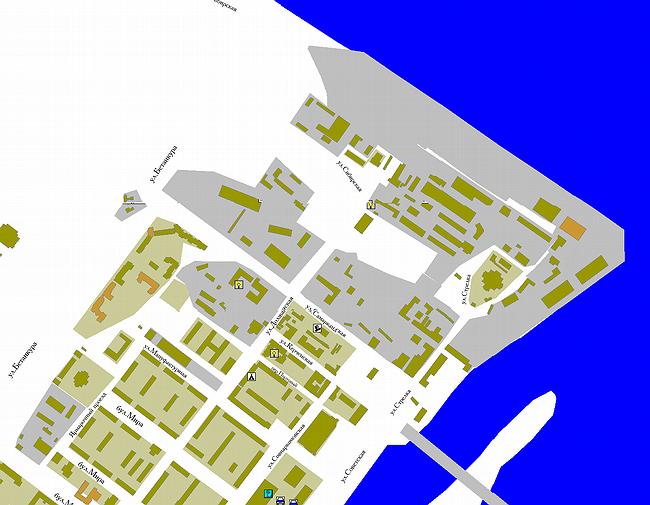