The Moscow court yard in a multi-storey way

On the bank of Moscow-river in Strogino there is a construction of elite microdistrict «Amber city» two of five towers are already built up for more than a half - 18 floors from thirty. Monolithic skeletons of erected buildings open to a sight its "stuffing", allowing to estimate the architectural cunnings incorporated in the project.

The microdistrict «Amber city» is located on the bank of the Moscow-river, in surprisingly beautiful place where the elite multiroom towers grows roots for ten years. This type of expensive houses, certainly, in Moscow it is necessary to recognize the most popular and its format developed and affirmed in opinion of both architects, and tenants. Such houses in edition of the ninetieth is some kind of houses of XXI century well protected and it is confident dominating above the district, and for greater similarity - enclosed by the ditch and a fence and decorated by the turrets reminding a decorative variant of serfs ring mount, on some unknown reason disabled. However during last years some real changes were outlined among the thirty levels towers. First of all, all of them are projected is more often by good architects, so the houses began to get a lustre and shine of a decent society - interesting facades, original forms. Not smaller changes occur inside: There are new structural decisions which provide developers in additional meters for sale, and tenants - new comfort.

Of similar structural inventions cases 4-1 and 4-2 of "Amber city», designed by Dmitry Aleksandrov can boast. Everyone case has a courtyard – atrium. The decision, habitual for expensive and low houses which are under construction in the city centre, is unacceptable for a skyscraper, atrium above 14 meters is forbidden for the sake of fire safety - tells Dmitry Aleksandrov, the new constructive decision therefore has been thought up: the courtyard is divided into vertical blocks consisting of four floors. There are from 8 up to 12 apartments in each such block - in everyone atrium the garden, fountains and an inclined panoramic window of four-storeyed height is planned. Probably, each court yard will have a design of an interior.

Actually, Dmitry Aleksandrovu managed to reconcile two kinds of elite houses - concerning small which meet in the historical center and skyscrapers of the suburbs , having united their advantages. Because outside we have the open space, the river, beauty, and inside - cosy and human «vertical city», with houses, to be exact the court yard, situated one above another. Such court yard, in general, is very necessary for the person because creates illusion of a life in rather small community of neighbours, and provides the comfortable scale which is not overwhelming in the size and by growth, as outside, but proportional. Here it turns out , that the tenant of a such skyscraper enjoys magnificent natural landscapes from the window which can not be in the center  and coming inside - is dipped into cosy scale of not-big city. It is just helicopter missing so that one can get to the office in the center just in few minutes. It is curious, that even this question is solved as much as it in general is possible to solve now . On a roof the real helicopter platform will be equipped. For fire helicopters, certainly - in fact it is impossible for private traders to fly above Moscow.

The unusual device of internal space has caused a number of the new engineering receptions which have demanded special coordination with the Ministry of Emergency Measures. For example, because the courtyard became an additional edge of rigidity of construction it was possible to save on thickness of interfloor overlappings, having finished them up to 18 centimeters. Finally the result has appeared worthy - the project has received the diploma on "Architecture" in 2004, in 2005 – it has been recognized the most successful architectural decision in competition with the speaking name «Best decision of the successful development», spent by the edition «М2»  having got 7,3 points from 9 possible. The decision has appeared also the truth successful for developers - apartments which were going to sell on 2000 for meter, are on sale on five thousand.

Monolithic designs of the house are now finished up to the 18th floor, the little more than half of the height and the cellular stuffing is well visible outside: thin layers of apartments and huge pharynxes of the future internal court yard, a new variant of elite "tower". 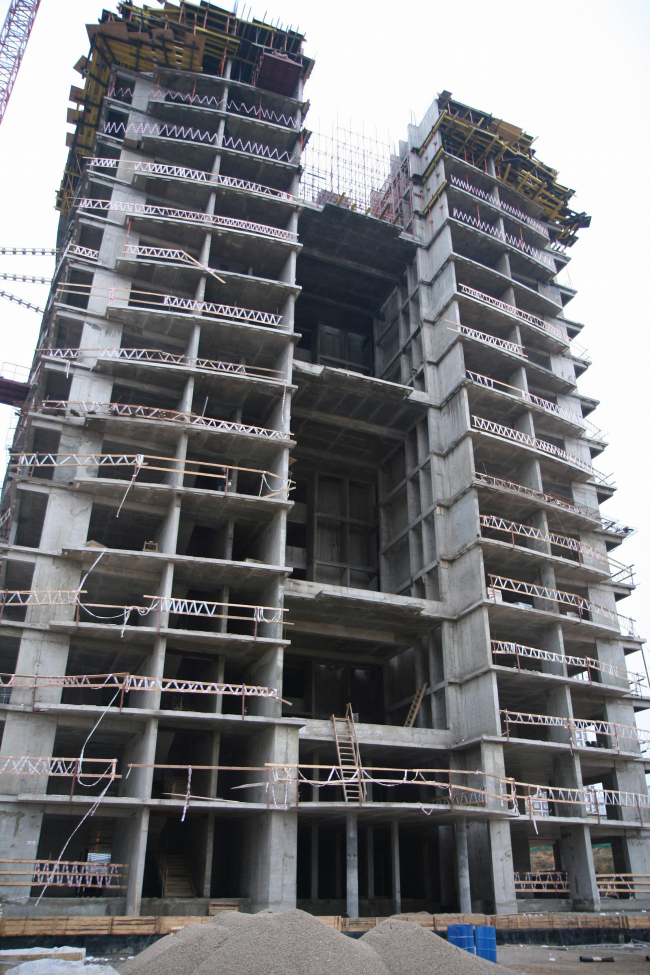