To the north from territory of the All-Russia Exhibition Centre, on Agricultural street, the new, bright high-altitude dominant grows - the inhabited skyscraper under Alexey Bavykin's project is under construction

Leaving the Moscow center through the prospectus of the World, passing by the vanity concentrated around the "Kosmos" and the entrance to the All-Russia Exhibition Centre, we get in unexpectedly quiet city space. After departure of « The worker and the farmer » on restoration there is somehow nothing to focus the look at and it becomes dullish. More truly, it has become dullish - before the occurrence of a new skyscraper designed by Alexey Bavykin which is well visible directly behind the Montreal pavilion. The house has grown already on all its height and starts "to be painted".

The height - the main theme of this building, it is in every possible way underlined and strengthened by all possible means, forcing, especially in some foreshortenings to recollect figures of Ladovski’s  skyscrapers. If to look from an end face, the house seems to be improbably thin, almost flying up. Three facades are filled in by a mirror of panoramic windows, from a glass background as rectangular islands, come forward the bright red plates dividing a vertical on three unequal parts - reducing the size up, they strengthen effect of perspective reduction, it is visually even more extending a 35-storeyed vertical of the house. The stone and glass have exchanged places: transparent around, dense and "hot", red in the middle, it seems to hang in the cold mirror weight, shining, as water in flowing nearby, here still pure Yauza. We shall notice, that behind the glass strips between the red rectangulars - the best sights windows of the most expensive apartments of the house are situated; one wall of such apartments will be completely transparent, with a view on the whole city. That is all from the part of the street.

From a court yard the house "is fenced off" by an easy bend of white "board" - on all the height, with a hanging from above peak. It becomes similar to a splinter of a huge egg from which VDNX hatched, with red flags not showered from it yet. Anyway, the attitude of the house to the space of an exhibition and the prospectus is rather obviously interested in – the building "looks" intently at this, the most curious part of the environment, turning here the most part of its windows. However, occurrence of white "board-shell" has a rational explanation: next to the building under construction, Alexey Bavykin tells, there is a school - and white color of a domestic facade is intended to shine with its reflected sunlight and thus keep strictly to the norms of insolation.

Besides the height, the other feature of a building - the bright open color. Pure white and red, alternated by the shine of the glasses, draw attention from apart. The open "basic" colors favourite once by avant guarde, in modern Moscow architecture have been mostly replaced by shades - pinky-violet-salad and other "soft" or exotic coloring. Color of stalin houses - reserve-yellow, breshnev’s - more often grey. In such company the new skyscraper is almost defiantly bright. And itself, as the small star, scatters around itself sparks of color - red and white prisms of subsidiary constructions. 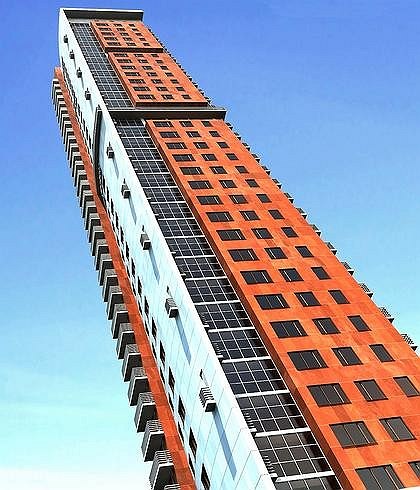 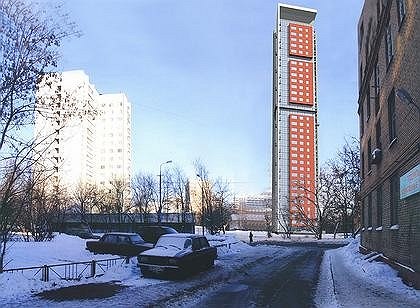 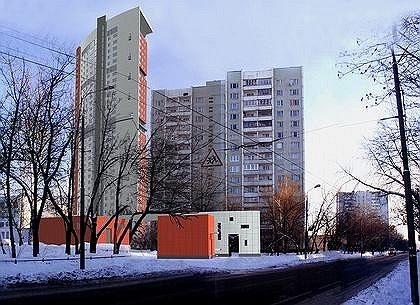