In Moscow, a couple of years ago, the reconstruction project of New Arbat was extensively discussed - the city authorities planned to hide a part of the street under the ground, and the rest ground part turn it into a walking boulevard with numerous recreation and shopping areas. The project still remains doubtful, the highway street is central and essential, but the Moscow architects liked the idea to hide roads under the ground and leave the town clear for foot-passenger. For example, the architectural concept of development of the Minskaya street has such town-planning concept, it is designed by the ABD architects and last year it won the open contest.

The object of the project contest is a piece of Minskaya street from Kutuzovsky highway to Bolshaya Filevaskaya and the nearby city-blocks. This is the Fili-Davydkovo district, one of the best in terms of infrastructure and ecology. And at the same time it is one of the most heavily populated in the west part of the capital. There are no industrial facilities, but a lot of small lanes, cozy small yards surrounded by five-storey apartment buildings. For a few years now building of Hruschev period are being demolished and on their places there appear high-rise apartment buildings. The most active the process is, the more authorities are getting concerned about the problem that the district is lacking a general concept of developing which would regulate different of the development and set the centre of Fili-Davydkobo.
Another ambitious town-planning goal is about development of Minskaya street which soon will be a part of the Fourth Circle. To avoid serious conflicts between the interests of the city and its citizens, a new architectural concept to implement some points of municipal transport infrastructure development program and reduce a negative influence of municipal road onto the surrounding housing is required. Unfortunately, there are a lot of examples when large transport communications simply tear up the texture of an urban area. Such is Leningradka in Moscow, Kifisia in Athens. Last year Moscomarchitecture announced the closed contest on an architectural development concept of the area of Minskaya street from Smolensky rail road direction to Bolshaya FIlevskaya street. The project designed by ABD architects was considered one of the best.
The idea of the project is to replace Minskaya street under the ground and develop the territory of the former drive way. Minskaya street is not the widest one in Moscow, but there are about 3 or 4 lines in each direction and when they will be released from the traffic, the district will gain really a huge territory.
The existing transport planning of the district is very traditional. Along Minskaya street you can drive through the district, on the rotary intersection, located somewhere in the centre of the reconstructed area, you can drive to the right or to the left, and along any of the streets on the perimeter you can come round the district and back to the main base line. The advantages of the planning are obvious, traffic jams is a rare thing in Filevo-Davydkovo (except for the streets nearby Gorbushka) and any part of the district can be reached by a few ways. The ABD architects take the main part of the road under the ground but they save the organization principle of the traffic within the district. The project of ABD architects provides four additional roads. They form a transport circle with one-way traffic which takes most of the projecting territory and replaces all the traffic out of the central section of the development area. The two streets perpendicular to Minskay street – Malaya Filevskaya and Oleko Dundicha – will also be taken underground, and Kastanevskaya, where they cross there is a heavy traffic, will break into two isolated parts.
Near the underground station “Filevsky park” on Minskaya street the architects offer a multi-level intercepting parkings. Any large foot-walkers area is specified by a large number of shopping, residential and office complexes, and many people drive to such places. The idea is simple, it is faster and easier to slip from the tunnel into a “bag” of the parking, than to search for a place along the nearby streets, and they will get rid of cars.
Empted spaces the architects call a multifunctional public zone which soon will become a local city centre. The part which used to be a road becomes a green boulevard cut by paths. ABD architects are true to their beloved principle of visually comfortable area and there are no straight paths. Zigzag boulevard will open foot-walker interesting views, and numerous resting areas and playgrounds, zones for social events, will “fill” the walks.
Along the boulevard there will be shops and services – in the project there is chain of such 2 or 3-storey volumes. They join 30storey apartment towers with the main retail and office centre located nearby the underground station. Except for the residential skyscrapers, there are 8 of them, there are 11 residential city-blocks with group housing of 8-12 storeys. While the residential skyscrapers create a system of visual accents the closed blocks provide strict division into public and private spaces, but finely continue the town-planning tradition of Fili-Davydenko district.
We can’t imaging the New Arbat without traffic, but transformation Minskaya street into a pedestrian boulevard seems obvious. The authors of the concept felt the character of the area and managed to bring back the charm of old filevsky streets by modern means.
Text by: Boris Levyant, Boris Stuchebryukov, Anna Martovitskaya 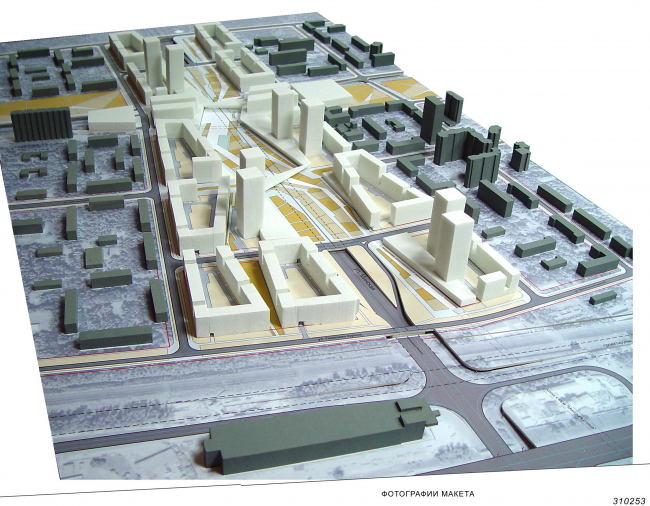 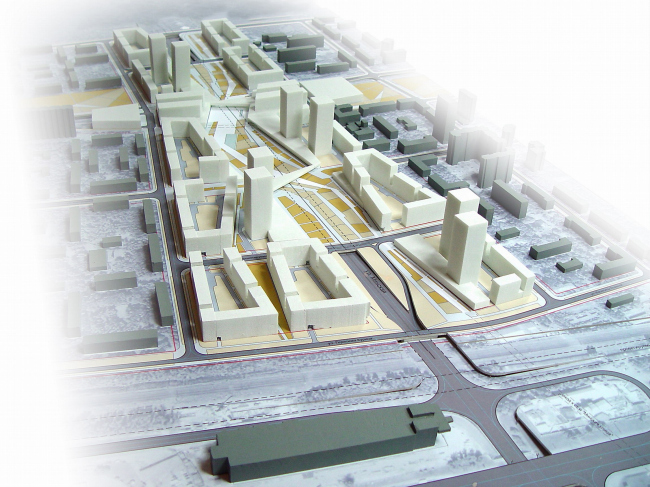 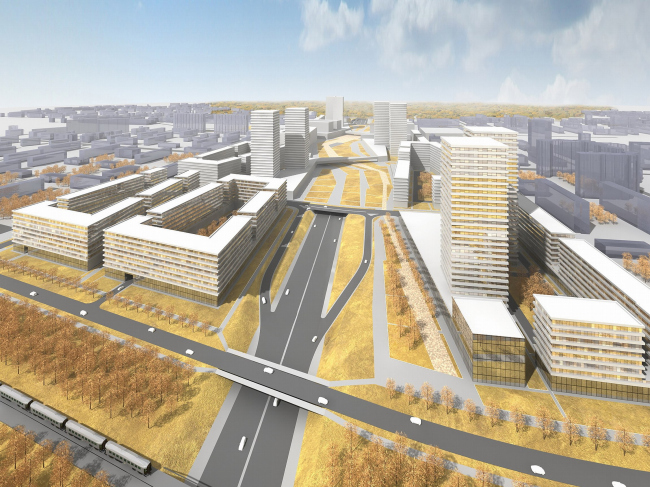 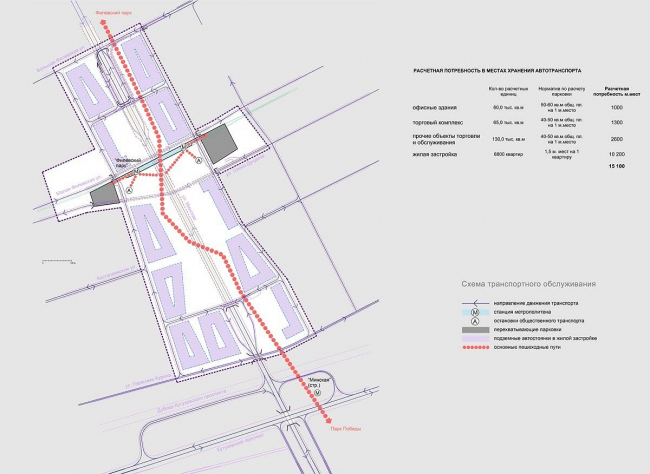