More than an office

It is a very neat and small building. In spring it was miniature by Moscow standards, and now it is a perfect fit as it is time of such constructions: neat and not ambitious. At the same time the project is not at all plain, and to see how those qualities merge in a single construction, we are going to consider more closely.

The building is a mixed-use centre, but about 5 years ago it would be simply called an "office". There will be not just office rooms, but a café, shop, fitness, rest zone and car parking areas. Everything is for 512 employees. In short, this is a local office paradise with all the comforts for good work and rest, without too much luxury. Well, I’ve seen only a few projects in Moscow which can truly be related to A "class".

This is a plain 12storey parallelepiped of 40х40х25 m size, put in the middle of a green site with a small distance from the red line of the two streets, by the crossing of which there is an intense area of Leninsky avenue and Udaltsova street. More than a half of the territory is left for lawns, bushes and trees, including "buffer", separating the construction from an apartment building. It does not expand too much over or under ground.

What most Moscow projects are like? Most of them take the entire territory, plant trees on their roofs for “compensation”. The others, more modest ones, are such on the ground, but occupy the spot of development under the ground – like stone trees they take their concrete roots far aside. None of those can be found here, the roof is not used, there are no hanging gardens. The underground parking is only a few meters wider than the visible part.

Inside the construction is simple and natural as well. In the middle there are lifts and stairs, around, towards windows – office spaces. Columns are thin, close to walls, do not discomfort – work space is open and can be organized in any way. An ordinary office box. Right-angled, plain and modest. No too much greed for space and without “too much”. At the same time here is enough of everything needed for comfortable work, including car-parking and recreational areas. It speaks of moderate riches with a motto – we have enough for life and nothing more. Not a luxury, but respectability.

Same attitude to life is seen – practically at first sight – on facades of the building. They combine accurate facing of noble yellowish limestone with glasses from floor up to ceiling. The stone and glass alternate in a quiet vertical rhythm, creating "windows" and "separation wall" of same width and stretched proportions. Only bents between storeys are faced by the stone next but one. A well-known optical method when visual perception of scale changes: the house seems smaller (6 storeys instead of 12), and more monumental (storeys seem huger). But here it is combined with very strict cutting of facades and remains less obvious: there is an effect but its origin is hard to define.

The second method – all the verticals, stone and glass, are put under a small angle. Surface of the facade becomes geared, like a saw and in fact is not a flat area anymore. Small angle reminds a slightly open shutter of a window – or a blind. Stone separation walls are covered by a plain relief pattern of horizontal strips and have a very strong resemblance with traditional European shutters. Only they are glass and stone and turned one side. Altogether they have the look of huge jalousie which is built among stone "rails" – it is like a mechanical front system and inside there is a lever to turn all the planes opening and closing the facades. Well, there are no such things, and the façade is absolutely static, it is double. It is energy-efficient, its external glasses are 6 m height. We have an image of mechanical system or a general reference to it.

And at last, the third and the most obvious method. It concerns not only exterior, but the volume. The parallelepiped is not plain actually. One of its corners, turned to the crossroads, but cars driving along Leninsky avenue (and that is logical) – has a stepped ledge. An it hardly can be called a bay window, certainly, it is among the distant relatives of form. As well as a console.

There is a corner ledge on the second level (joining the 3d and the 4th storeys) hanging over lower floors. Between glass planes in its central part there are no stone separation walls, and outside there appears kind of corner window, so favorite in avant-garde architecture. Inside there is a panoramic stained-glass window from floor to ceiling, lighted main space. Such is good for a director’s cabinets or a conference room. Then, where the console extends beyond the basic volume there appear stone “shutters”, and the surface corves. The ledge is not rigid, but smooth, stone "rail" between storeys turns, zigzag of “type-setting" façade is repeating it. If consider imitation of mechanical surface – everything is logical. I imagine, windows and doors going along a guiding rail, like clothes in an automatic wardrobe.

Over, the ledge becomes wider at each level and on the top takes most part of the façade’s length. Like, there a wave rolled over mechanical surface and the building started "pulling apart". As to the last – it has good reasons, apart from the plastic effect, it have a practical idea – gains more square meters due to consoles hanging over the ground floor.

The building can be easily compared to the other projects of SPeeCH, as well as some projects in Petersburg, where Sergey Tchoban participated. Striped white-stone image of shutters-jalousie can be seen in the House by the sea recently completed. Zigzag walls are similar to the stopped mechanism – the building on Odesskaya (absolutely different though). Domination of stone in combination with art-deco proportions is similar to the complex on Ozerkovskoj quay. Numbers of vertical windows are like in “Byzantian house”. The building fits in the list well, displaying another line in formation "Moscow style” of SPeeCH

Actually it is very interesting to observe the process of formation of recognizable architectural language in quite modest, at least in size, building. Apparently intelligent, purposeful process and comes from the aim to developed a style right individually for a city. In other words, each project searches not only appropriate style but studio’s individual approach to a certain city. Search is partial and general. Degree of novelty of each motive is less important than how it fits the general scene and what it tells. So, elements are well-known but in general it is new. A quite classic approach to the architecture.

What about the building on Leninsky avenue. It is like a stoned mechanism, like conveying belts “bearing” windows. Image of a mechanism is the favorite theme of constructivists, but never realized this way. Favorite theme of radical modernism. The stone, pseudo-shutters and proportional structure make the building more conservative. This is a fusion, where supporters of technical radicalism and stone traditionalism can find something interesting. If examine in detail. At the external level it is a quiet, delicate and respectable architecture. Moreover, there is seen European consistency and preciseness. Employees of the neighboring embassy of Germany might like it. 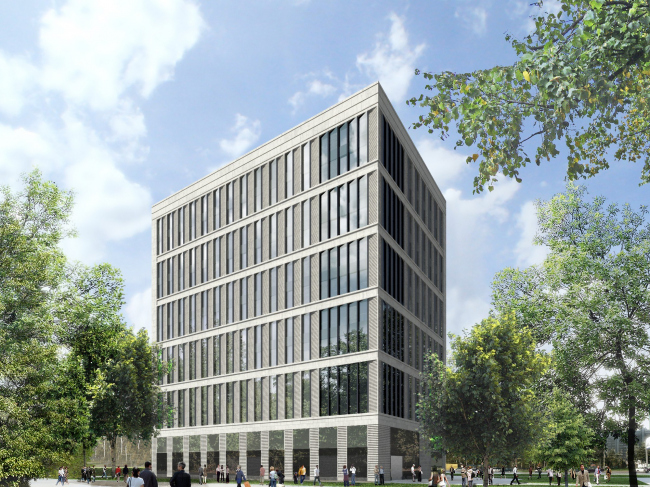 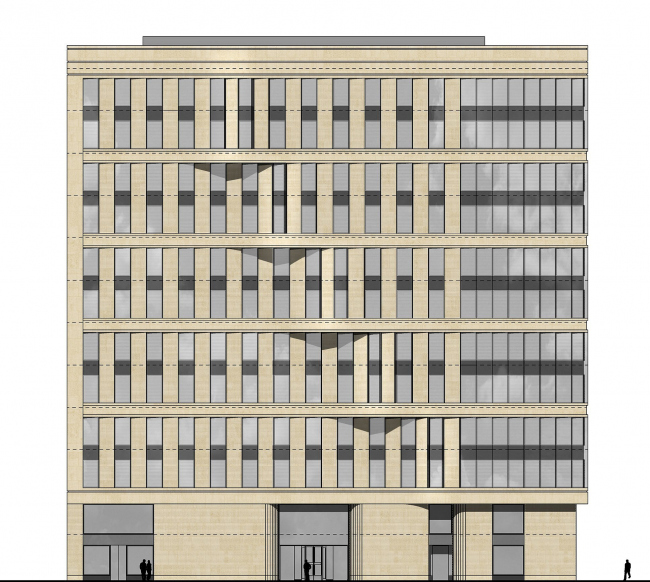 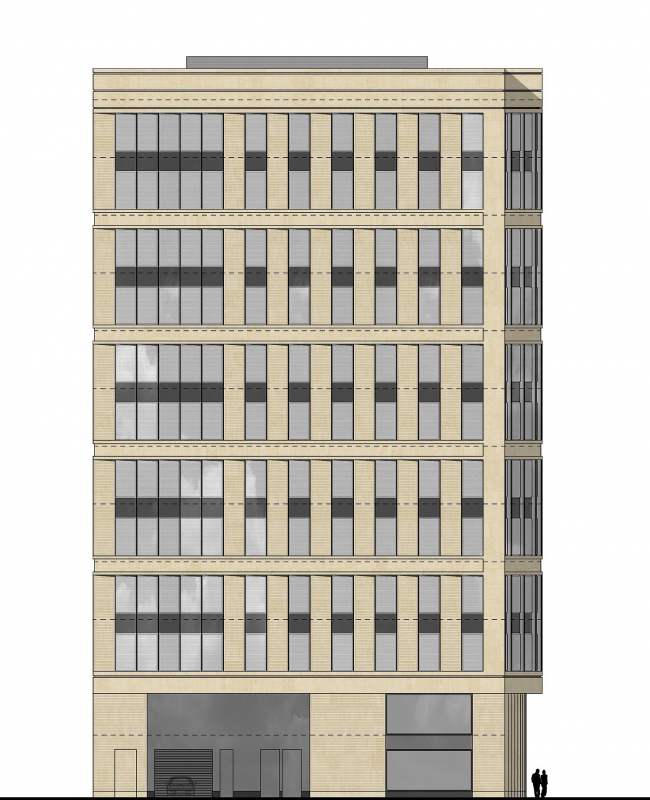