In summer “Mirax-group” chose the winner of the contest on a reconstruction project of the embankment opposite to MMDC – it is “Mirax-Garden” by the studio of A.A Asadov, a residential bridge connected with the largest lawn in Europe, a spectacular, complete and remarkable project. The embankment and the bridge were showcased to the community board together with the project for the opposite bank of the river – place once occupied by “Aptekarsky ogorod”, now there is a green city block by the Third Ring, which was saved by the city for “green lungs” Moscow-City. There are to site, 24 and 25.

First, “Mirax-group” suggested A.A.Asadov’s studio participating in the contest on development of the site 24. The architects designed the project of a two towers which shape repeats flying move of the bridge. They grow from the ground like a glass wave, spiral and somewhere in the middle they grow together creating a narrow but tall atrium-gorge – everything nature-wise. Its exterior area has something in common with the architectural solution for the bridge – it follows the idea of diagonal structure, only they are not rainbow, but green. A.Asadov says “from the very first start it was clear we would not build there skyscrapers, but there must appear some geological formation of another kind” Well, changeable sculpturesque plastics and green covered the towers make them different from skyscrapers of the “main” City, more traditional.

Further, A.A.Asadov’s studio was suggested developing the nearby MMDC site 25. Thinking over territory the architects realized it would be wrong to adjust another two skyscrapers to the glass forest of the City. Searching for variants there appeared the idea to join the sites and construct a kind of triumphal arch – gates of the Moscow-City. So there is a 280 m height tower-arch. It is more symmetrical and simpler than the original volume of the site 24. Architects of A.A. Asadov’s studio have developed the plan of the arch-building in co-work with Vladimir Travush, the chief constructor of the City. The variant was showcased on “Zodchestvo” festival in Manezh.

The third result of the research was a very tall building, shape of which reminds of the Eiffel Tower. The two straight glass “legs” merge on the height of 410 m and grow on as a vertical volume crowned with a spire – it would be 100 m higher than “Russia” tower by Foster. Between “legs” there would be a number of horizontal storeys of hanging gardens. This, the largest one, was architects’ response to the clients’ spontaneous idea to build in the place of “Aptekarsky ogorod” a high dominant of the future City and be ahead of Foster. The authors compared the giant tower to a medieval dominant of the old Moscow – Bell tower of Ivan the Great, it gave popular in the studio secret name to this variant of the project.

After challenging researches and even fantastic variant it was time to come down to the earth and design a more realistic project, lower and plainer construction arrangement. There emerged the two pairs of constructions of mild smooth shape, layout outline of which resembles a butterfly wings. Their height – 160m and 200m and the both pairs mirror each other. They are similar to the first variant, only doubled and more reserved in its sculptural flight. As well, they are similar to the bridge and Mirax-Garden: their facades are covered with a diagonal net with rainbow stripes.
As if some colored energy of the residential bridge thrown over the river spattered creating the four buildings covered with a net ornament. The architects consider their main achieved that they have designed it different from the glass forest of the City’s towers.

This set of alike and different projects of the sites nearby the City is remarkable firstly as an illustration of the process of the project’s evolution. It went through a few regular stages: from impressionist plastic work piece, which has absorbed the energy of the neighboring project by same authors, to a significant and ancient arch shape, than – went growing to “Ivan” of fantastic height, similar to the Eiffel Tower, and finally have come to simple and rational, divided into parts connected by a rigid geometry of lines. So different, they are joined by the aim to create something different from the popular City and similar to the bridge-garden. And heritage of “Aptekarsky ogorod” in the shape of everywhere green, which might not have anything in common with the garden but is closer to ecological researches of the modern architecture planting trees everywhere possible. 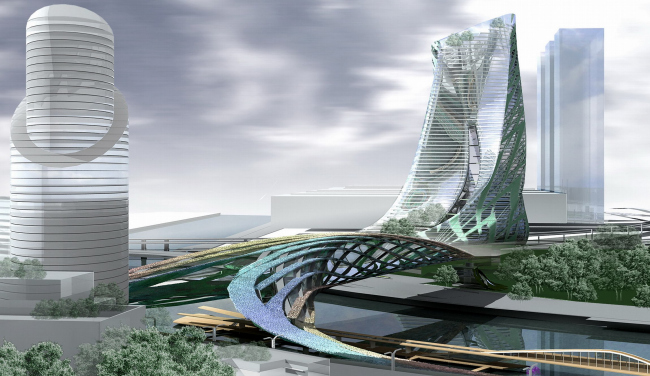 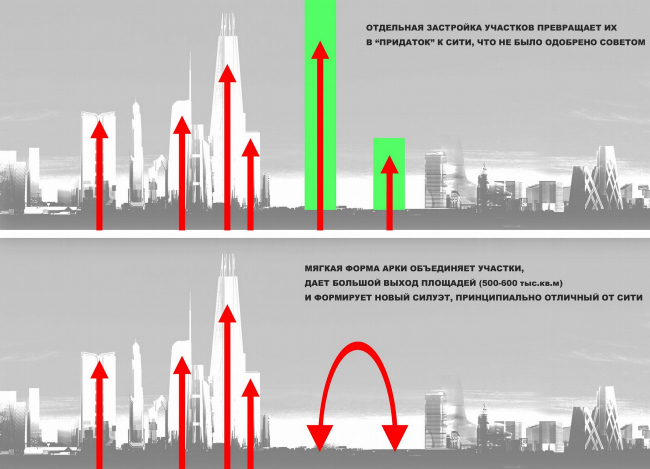 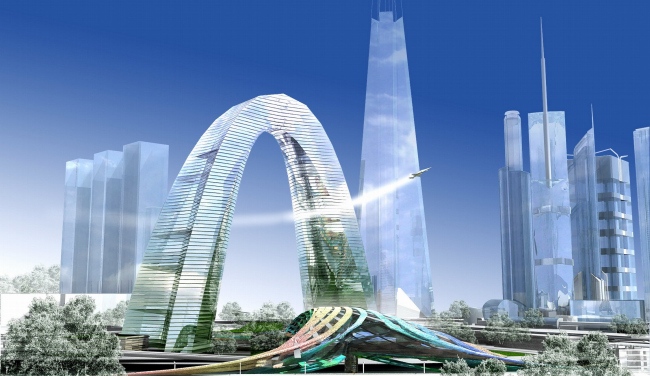 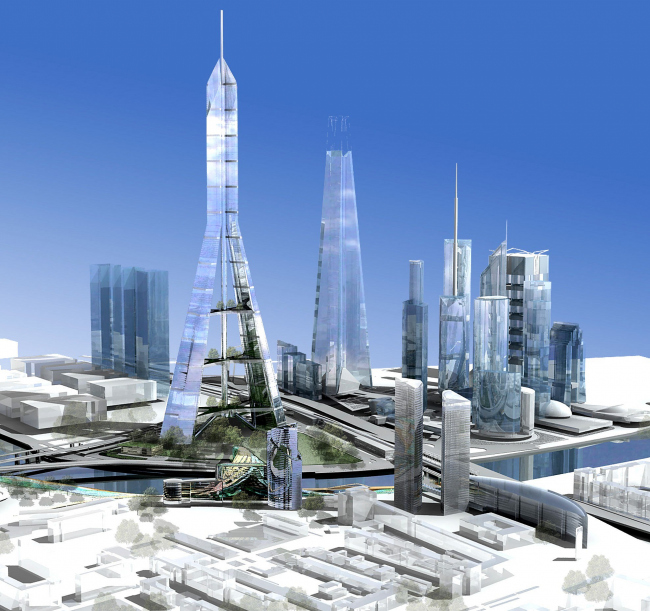 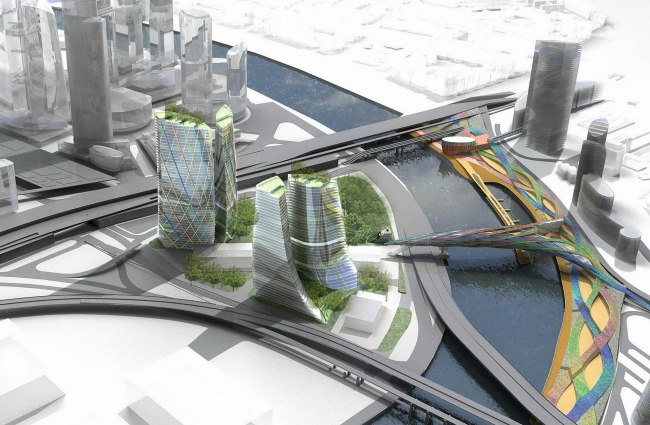 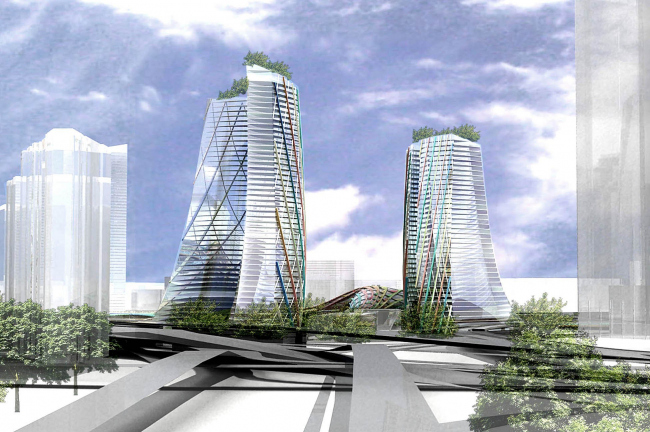 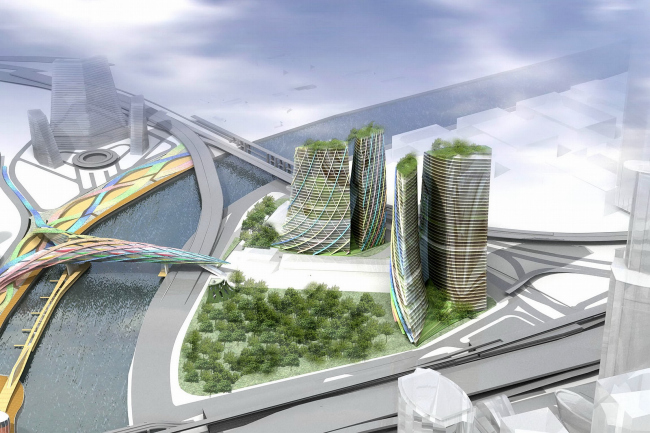 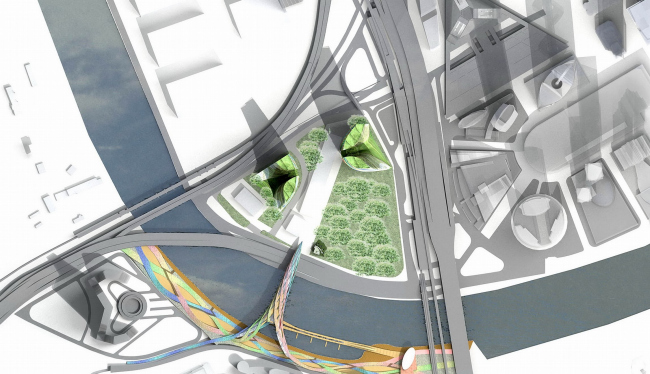 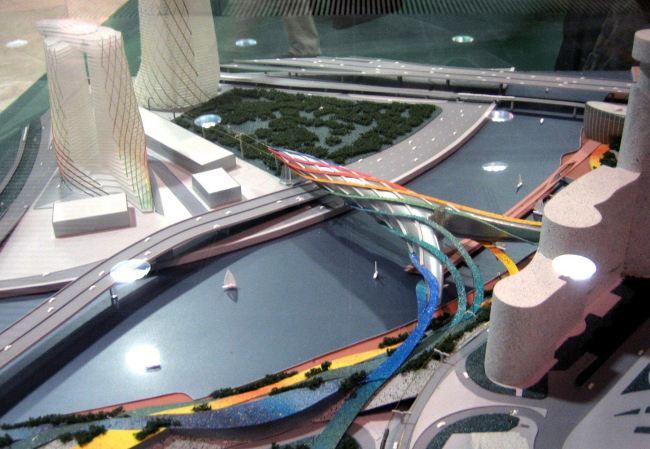 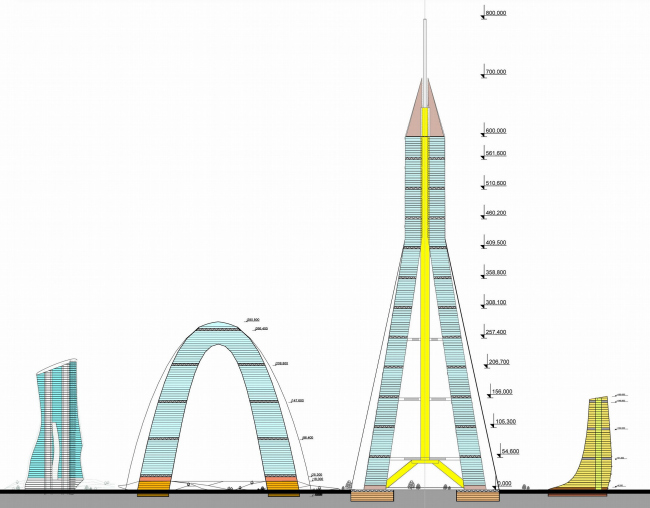