In the “Parallel House” residence that he designed in the Moscow metropolitan area, the architect Roman Leonidov created a dramatic sculptural composition from totally basic shapes – parallelepipeds, whose collision turned into an exciting show.

It was not by chance that Roman Leonidov named his creation Parallel House. Armed with a minimum range of techniques, by using only parallels and perpendiculars, squares and rectangles, cubes and parallelepipeds, without any diagonals or curves, the architect was able to create an extremely powerful “rock-n-roll” image. “My houses make aggressive and modern statements – Roman Leonidov proudly explains – In addition, in this particular instance, this laconic house is a portrait of its owner, a self-sufficient person who stands firmly on his two feet, who knows what he wants, and, most importantly, knows what he can or cannot do.”

The house is a large one – its total area is over 800 square meters plus a basement floor with a billiard room and a wine cellar. The position of the house on the land site was conditioned by the client’s desire to shut off from the highway, at the same time leaving enough space for a beautiful landscape. The plan of the house remotely resembles the U letter; it is turned to the meadow and tall trees, the side wings embracing the grand yard and forming a natural shelter for the privacy of its residents. From the side of the road, the house and garage entrances are situated, the grand facades being the side one and the one overlooking the park. The house is conditionally divided into the central unit with a triple-height public area and the master’s block, the left wing with a swimming pool and a spa in the first floor, the staff apartment on the second floor, and the right wing with four children’s rooms on the second floor, along with the master’s study and the guest room on the first. As for the bearing structures of the building, Roman Leonidov opted for the time-tested and easily implementable ones: the foundation is a concrete slab; the walls are brick with reinforced-concrete intermediate floors. The solid brick is finished off with natural materials: slate, larch, and travertine.

The composition is based on the idea that the parallelepipeds are bumping into one another, some of them even hanging above the ground as cantilevered structures. Hence the feeling of power and motion, curiously combined with an impression of balance. There are a total of six parallelepipeds: two black slate ones, two red larch ones, and two white travertine ones. The black parallelepipeds are the main ones; they are higher than the rest. One of them contains half of the public area and the master’s section: the bedroom, the wall-in closet, and the bathroom. This “slate” parallelepiped looks at the park with two symmetrical stained glass windows, while from the side of the road its top part is slit with ribbon windows that create dramatic lighting in the interior (more of which later). 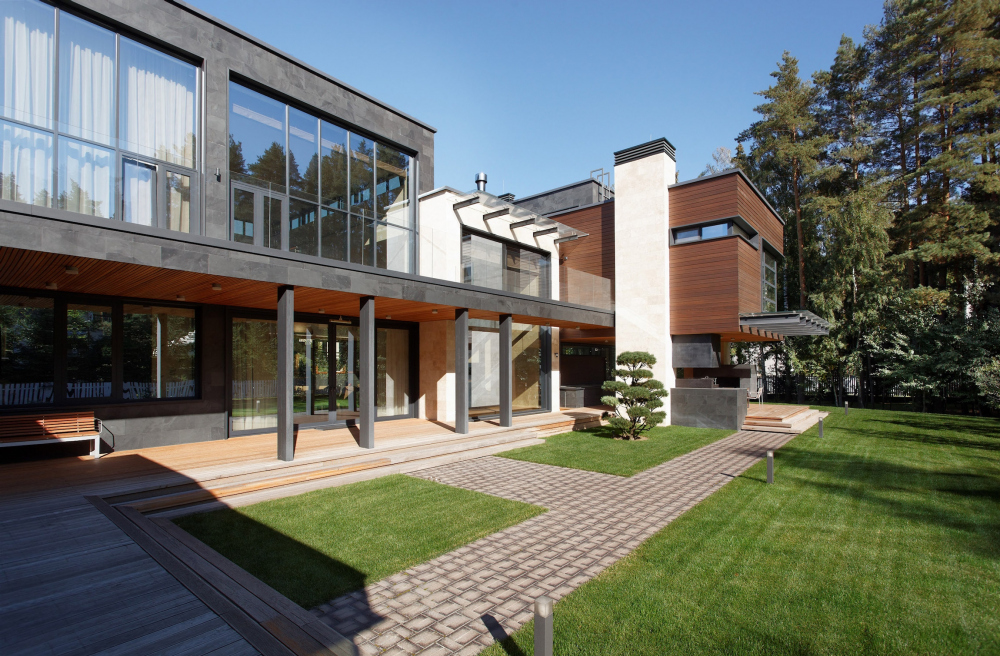 The other black parallelepiped contains two – double-height! – children’s rooms, forming the side facade, the most representative one, if we are to speak about the image of the house. Its wall, just like the first one’s is pierced by symmetrical stained glass windows, yet with a horizontal divided glazing (the principle of parallels is observed even in the transom pattern). This heavy slate volume “levitates” a few meters above the ground, resting on the ethereal glass wall of the study, at the same time bumping, like an ice breaker, into the lower larch parallelepiped. Which, in turn, hangs in an imposing heavyweight cantilever, even if lightened up a bit by avant-garde glass corners. And, finally, the white travertine vertical looks as if it “presses” the entire composition to the ground. The larch red parallelepipeds are more horizontal and more elongated. The left one (plan-wise) includes a swimming pool that is turned with its glass wall to the grand yard.

As was already said, the first floor of the right-hand parallelepiped is occupied by the study and the guest room, while the part that is nearest to the garden is essentially an open air hearth. The barbecue kitchen utensils look quite flashy: it is also a system suspended cubes – the artistic principles of the building are repeated even on a miniature scale. The low-rise travertine parallelepiped, visible from the yard, marks the “fireplace” part of the public area. Yet another travertine vertical adds stability to the levitating forms, tying them to the ground. The connection between the house and the nature is achieved not only thanks to the glazing but also thanks to other decoration materials: the travertine finish literally continues into the interior design. One cannot help mentioning a very flashy design solution of the public zone. This is a complex, multilevel, almost Piranesian space, traversed by bridges and staircases, where the streams of light coming from all sides intertwine. It consists of a kitchen, a dining room, and a room with a fireplace, the dining room being the highest part, the other two rooms single-level. From the garden side, the living room is adorned by an incredibly tall stained glass window, while on the opposite side, in the anteroom and staircases area, there is yet another stained glass window, and the space works peek-a-boo. On the second-floor level, the public space is surrounded by a gallery with a glass barrier. The gallery bleeds into a “bridge” that leads to the children’s rooms on the second floor. In addition, directly underneath the ceiling the space is belted by the ribbon windows of gallery light. Being in the living room, one can cast his eye over the space as a whole, with all of its intersections, its second and third levels, bridges and overpasses, as well as canyons and caves. Curiously, the spacious double-height master’s bedroom overlooks the main park facade with its taller stained glass window – it is situated not in a secluded but in the representative part of the house, being, as was already said, a part of the central parallelepiped. All of this really gives a grand look to it. Up in the air, behind the double-height stained glass window, there is a terrace handing on the level of the second floor – from the living-room side, people who stand on it, as if hovering between earth and sky, will look like actors in a constructivist theater setting or like stuffage figures in a Piranesi print, understood in a whole new way.