Honoring the 300th anniversary of the Kuznetsk coal fields in 2021, a new passenger terminal of the Aleksey Leonov Airport in the city of Kemerovo will be built, designed by GK Spectrum and ASADOV Architectural Bureau.

In March of this year, the project of the new terminal of the Kemerovo International Airport, developed by GK Spectrum in collaboration with ASADOV Architectural Bureau, passed the state expert examination. It is planned that in April this year the results of the general contractor tender will be announced, which will signal the official start of the construction work.

The Kemerovo airport is a rather small one, consisting of two terminals: domestic and international. Both were built in the 1960-1970, and the necessity for modernizing the city’s air gate is long overdue. During the height of the season, the airport can hardly tackle the workload and does not provide the expected comfort to its passengers. Meanwhile, the city is actively developing, more and more often hosting national and international events. For example, in 2022, Kemerovo will host the Volleyball Men’s World Championship 2022.

Since 2016, the airport has been managed by Novaport Holding, a Russian transport company which operates regional airports, and holds interests in the operation of several other airports. First, Novaport initiated the project of reconstructing the existing buildings, the airfield, and the runway. Then, in 2019, it considered building the third passenger terminal for domestic flights – to design it, Novaport turned directly to Spectrum and ASADOV Architectural Bureau, with whom it has had a long-standing experience of successful cooperation. The most recent example of it is the Perm airport, finished in 2017.

Taking the role of the General Designer, Spectrum developed the functional layout of the building: clear-cut, comprehensible, and rather efficient – Andrey Asadov shares. Based on this layout, and observing the budget constraints, the architects were to create a laconic and memorable image. By joint effort, the architectural project of the terminal was developed at a short notice, as well as the interior design project of the public areas. 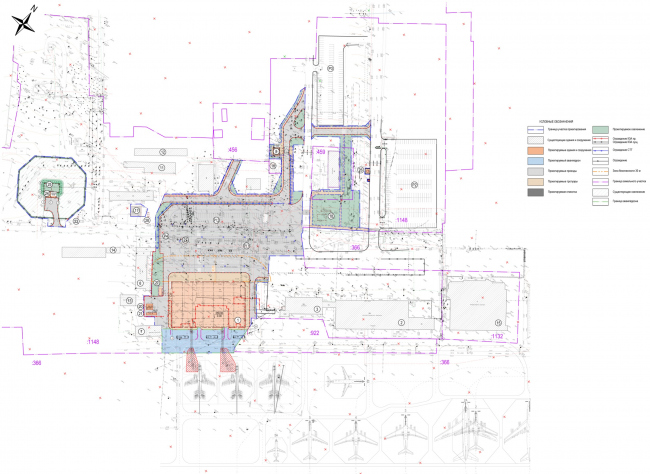 The new terminal will be built on the territory of the active airport, situated 5 kilometers away from the southeastern border of the city, and 11 kilometers away from its center. The already existing terminals bear against one another. From the east, the international sector is situated; in the middle, there are the domestic flights. The new volume will take the vacant plot on the west side. Together, the three buildings will make a simple linear composition standing along the edge of the airfield. There will be glass galleries of passageways between the terminals.

On the plan, the new terminal has a simple triangular form that will be added by two telescopic passageways. The measurements of the plan on grid lines are 84x51 meters. The height of the volume is a little over 21 meters: three overland floors and one underground one. 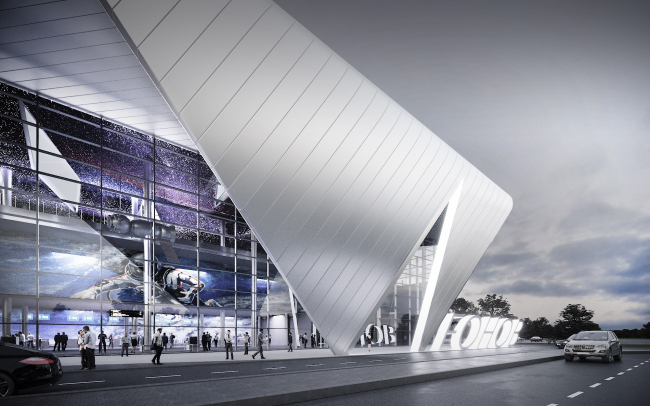 Passenger terminal of the Kemerovo Airport. The central entrance.

The airport legend is based on space. Similar to the Saratov airport, designed and built by ASADOV Architectural Bureau and bearing the name of Yuri Gagarin, the Kemerovo air gate is “dedicated” to Aleksey Leonov, born in the village of Listvyanka of the Kemerovo Oblast. Aleksey Leonov was the Soviet cosmonaut and the first person to walk in space. However, while in Saratov the “space” imagery is presented in a slightly oblique way (and, besides, we will remind you at this point that the airport was named after Gagarin when the building was already in construction), here it is delivered in a quite straightforward manner: open space, the vast vistas of the universe, the boundless and shimmering skies all around. All of this in spite of the modest size of the building, its total area being just a little over 10000 square meters, half of the Saratov airport.

The open space is hidden inside the building, like a sweet filling. But you can taste a little of it already from the outside. The facades of the terminal along the entire contour are given to stained glass glazing and are almost literally “filled” with starlight that turns transparent glass into a kind of giant multicolored screen.

The stained glass perimeter of the main volume is only in some zones covered with decorative horizontal lamellas, predominantly in those places where the mechanical rooms are situated. Specifically, they belt the rounded corner from the side of the main facade, and bleed further on to the side wall and the branch of the passageway. 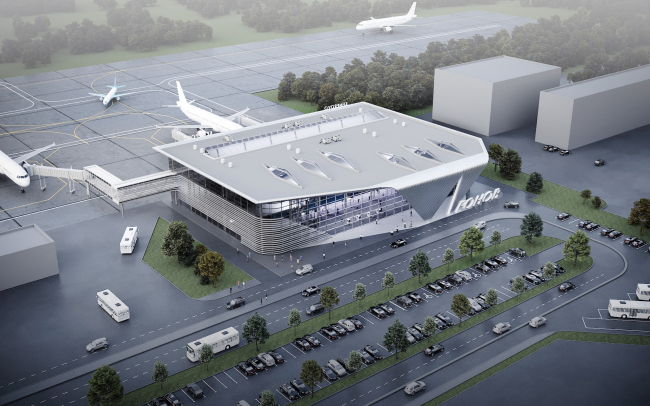 The glass volume is covered with a silver roof, whose surface, smoothly bend, descends almost down to the ground in front of the main facade, almost like a corner of a tablecloth, or, to be even more accurate, like a wing of some space-age flying apparatus, splitting into two sharp triangles, the space between which forms the first letter of the cosmonaut’s surname – Л. This is how a “sign” sculpture appears; the building merges with its name, becoming its integral part. And the main entrance facade, facing the small plaza and the driveway, gets a beautiful recognizable highlight. The “wing” of the metallic roof also creates a canopy before the entrance, stretching in stunning hi-tech cornices on the sides, making the volume complete.

A similar technique can be seen in the Perm airport, also designed by Asadov, whose giant wings bring associations with angels and with flying in general. In the building of the Saratov airport, one can also see the spread wings, yet this image is delivered in a more subtle way, vibrating in the sunlight almost like a mirage. In that instance, however, the theme of glass is more active, transparent and glittering. Glass and wings seem to become Asadov’s signature technique when it comes to newly designed airports, which comes as no surprise because they conceptually go very well together. The surface of the roof and the canopy will be coated by metallic panels of a silver tone, characteristic for spacecraft. The whole construction looks very slender and exquisite. Resting on a glass basement, it visually hovers in the air. It even seems that its only supports are the sharp angles of the silver wing, which, of course, is not the case. According to Andrey Asadov, finding the construction solution for such design technique was quite a challenging task, much more so because the building will be constructed in an earthquake-prone area, where safety requirements are especially high. 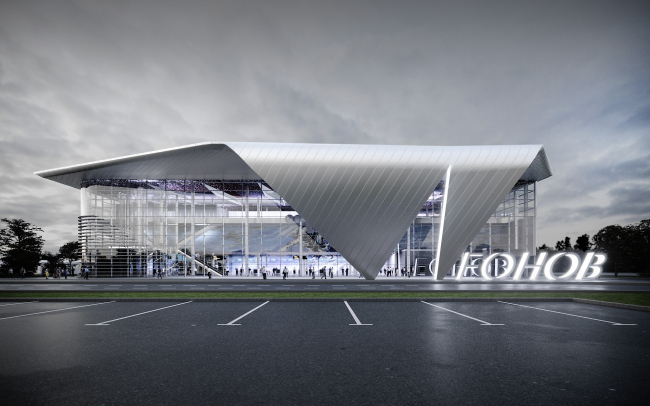 Passenger terminal of the Kemerovo Airport. The main facade.

The arrivals and departures zones are situated on different levels. The departures zone, along with all the appropriate services, occupies almost the entire second floor. The first floor includes the arrivals, luggage claim, and the check-in counters. Also, the new terminal will include special service and business class lounges. 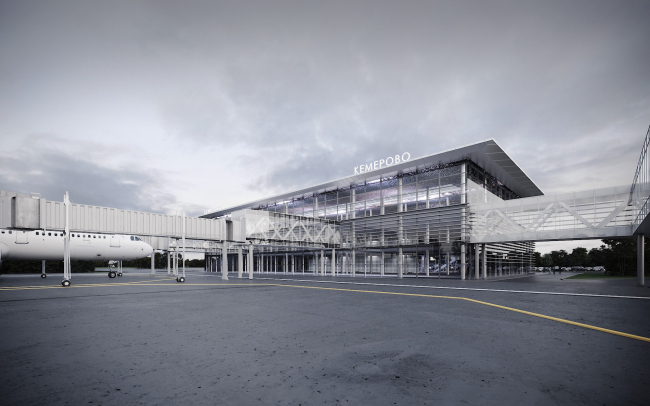 Passenger terminal of the Kemerovo Airport. View from the airfield

The entire ceiling – common for the arrivals and departures – is blacked out. Tiny spotlights form a multitude of constellations on this background, and even the Milky Way.

“We were looking to convey the feeling of infinity, to transform the inner space through color and light – Andrey Asadov explains – This is a powerful emotional technique: a person enters the airport and finds themselves in outer space.” Which, we will note, fully explores the Leonov theme of getting out of the spacecraft, and a scatter of stars that the cosmonaut is seeing, particularly bright unobstructed by the atmosphere. In spite of the “starry sky” effect, the halls of the terminal will have plenty of light in them. Some extra natural light will be also coming through the skylights in the roof. There are six of them above the central hall of the first floor – they are large and diamond-shaped, with a skeleton of the steel framework showing through. Yet another skylight dissects the entire length of the starry sky above the departures.

The interior looks totally sci-fi. It does not even look like an airport, rather, like a planetarium or a museum. This association is further strengthened by the model of Voskhod-2 spacecraft, the one from which Aleksey Leonov for the first time in history exited into outer space. The 1:1 scale model will be suspended in the center of the main hall. Saratov’s airport building hosts a cosmic museum with a giant media band. The whole space of the Kemerovo terminal is designed in such a way that it looks like a museum. Instead of media band and exhibits, this terminal features a large LED screen that shows cosmic landscapes, and a reproduction of a painting by Aleksey Leonov. Although few people may know, the Soviet cosmonaut was a painter as well. His works are also exhibited in the Tretyakov Gallery. The painting “Above the Black Sea” by Leonov will occupy the entire wall over the check-in desks. The LED screen will be mounted in the main double-height hall, on the ledge of the second level. As Andrey Asadov shared, the project of Kemerovo airport developed quite rapidly. And it will be implemented just as aggressively: the airport administration promises to open the new terminal to passengers already in spring next year. Marking the 300th anniversary of Kuzbass, the city will get not only a modern transport hub, but also a new symbol of the city, a reminder of the space achievements of our country, and of the great people born on the Kemerovo soil.