The house is situated not far away from Moscow in a settlement built in the mid-2000s. The place has a developed infrastructure but, as is often the case with such places, its environment is all odds and ends: houses of all possible kinds you may think of hiding binding behind fences, just as diverse. The house with an area of 570 square meters is built on a comparatively small 0.32 hectare land site at the bottom of the settlement where the terrain makes a drop. Its author, the architect Roman Leonidov, tried to include into his composition as much of a garden as possible. The house also serves as a screen that protects the land plot from the noise of the highway. The garden is cascading down in terraces.

Two parallel parallelepipeds, a larger two-story one and a smaller single-story one, are connected with a lintel of a habitable bridge. The two-story one contains the public zone: the living room, the dining room and the kitchen below, and the master’s bedroom up above. The single-story unit contains the garage and the maintenance block. The driving entrance is made from the highway side and directly under the lintel bridge. The main entrance to the larger unit is also situated there.

The orientation of the house creates a feeling of being secure and having plenty of room at the same time. The relationship between the house and the street is slightly ambiguous: the street facade, conditionally speaking, is pretty much like a fortress – with narrow horizontal and vertical windows that, although do let in the light, are situated pretty high, and one cannot see anything through them from the street. 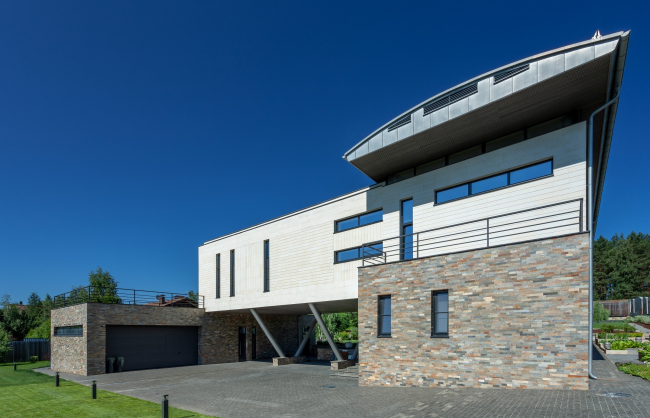 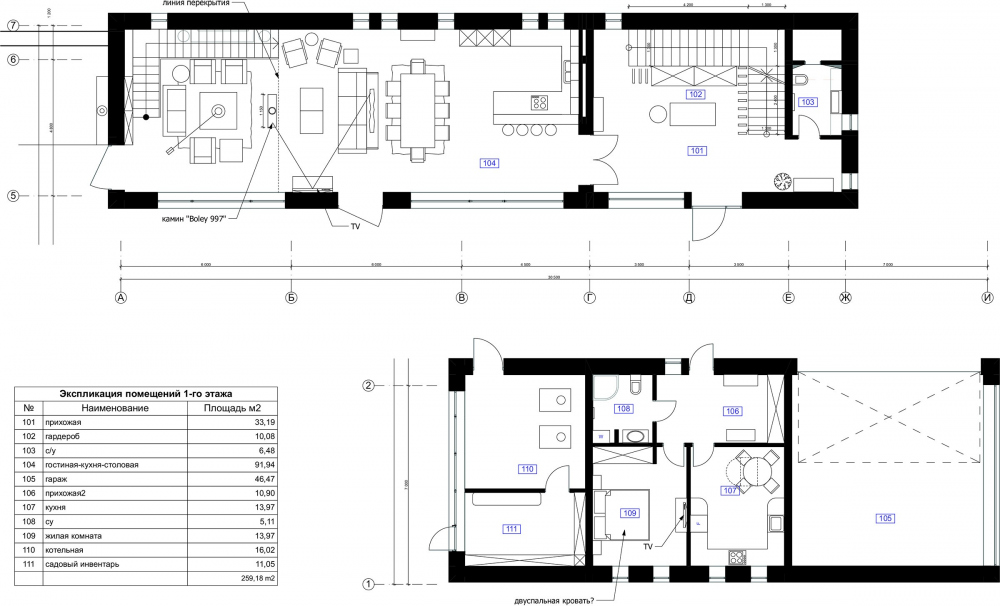 Roman Leonidov: “We started designing this house five years ago. Our client is the top manager of a construction corporation, and he was about forty-five years old at the time. If I designed this house today, in this same place, I would have made a different project for this client – something simpler and more conservative. At that time, he wanted something modern and flashy”.

The architect proposed a modernist version with high-tech features. On the whole, the design solution of this house with light-colored stone coating on the upper tier, and colored stone in the lower tier is well-balanced and elegant, but Roman Leonidov decided to sharpen the plastique of the building by introducing a roof with an enormous marquee that would have been more appropriate on some public high-tech building with a sports function, like the Snejcom indoor skiing complex in Krasnogorsk. This active element, the marquee roof, coated with aluminum, covers the main building, forming, on the garden side, a huge cantilever that rests on a steel frame. Underneath it, on the level of the first floor, in the open air, yet protected by the formidable awning, sits the barbecue spot. Its borders – the prop-up walls of the garden terraces – give protection from the wind and make the space look deeper. The “awning” roof looks as if it lives a life of its own, independent from the main parallelepiped; visually, it is detached from it with a line of ribbon windows that make it look as if it were hovering in the air. On the other end of the parallelepiped, the one that faces the street, there is also a marquee, but one of a smaller size. The tall space underneath the marquee gives the house a scale of an expo hall. Another active expo motif is the bridge on V-shaped supports. These also enhance the high-tech impression created by the architecture of this house. Inside the bridge, there are the guest rooms (the ones that are ex-children’s). Going past them, the guests can not only walk down the inside corridor but also pay visits to one another via the gallery underneath the wooden pergola. From the galleries, one can also easily come down to the open air terrace on the roof of the low-rise garage. The interior of the main unit is based on a combination of white walls and warm wood. The anteroom, the kitchen, the dining room, and the living room with a fireplace are all combined to form a single space. Remarkable is the fact that, following a series of single-story zones, this large double-height living room with stained glass windows in the two of its tiers, a glass gallery, and a flashy staircase creates a truly dramatic effect. The fireplace, which looks like a pendulum, is the indisputable centerpiece of the composition. The wall, bordering on the outside space and the barbecue spot, is coated with rugged natural stone in the part where the chimneys are routed, reminding of the facade coating and establishing the connection between the interior and the outside world. From the living room, one can exit through the glass doors into the garden with the barbecue spot, and to the extra parking places under the bridge. Generally, the interior of the public space with its spaciousness and numerous functions, gallery lights, open staircase, white walls, works of art, and glass fences of the upper tier looks like the grand hall of an art gallery.
Text by: , Roman Leonidov
Translated by Anton Mizonov