Designing and building in Moscow area’s Lyublino a fitness club called La Salute (which translates as “health” from the Italian), ASADOV architects did make the life of this area healthier by bringing designer architecture and new useful functions into the standard environment. The dramatic tectonics of the building empathize its sporty intentions. “The fitness club La Salute is not our first joint project with Andrew and Alexander Asadovs – shares the commissioner of La Salute, Larisa Khanokhova – We already built together a bilingual kindergarten in the Maly Poluyaroslavsky Alley, the best kindergarten in Moscow, in my opinion. It was designed as a magic theater, and it’s also unique from the point of view of children’s education. We have been doing educational projects for quite a while now. Also, together with ASADOV architects, we are expanding the “School of Cooperation” on Taganka. As far as this fitness center is concerned, Lublino consists basically of bleak architecture consisting of rank-and-file prefabricated houses. Therefore, in addition to the business task, I had this idea of lifting up the status of this area with a new infrastructure project – a world-class fitness center. At the same time, it is quite accessible to the local residents price-wise”.

The volume of the fitness center is rather simple: the U-shaped plan is turned with its “back” to the residential houses, facing the park, the right wing two stories high, left three stories high. On the lintel, appears a ledge of transition from two stories to three, the taller left part ending in a large cantilevered structure that takes on the role of a marquee because the main entrance is situated underneath it. 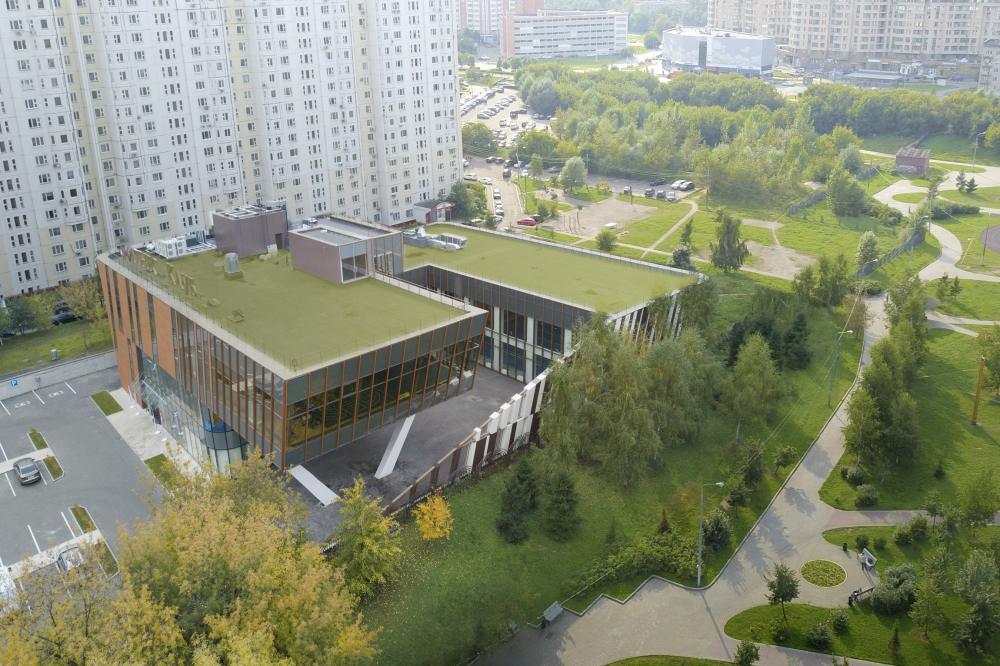 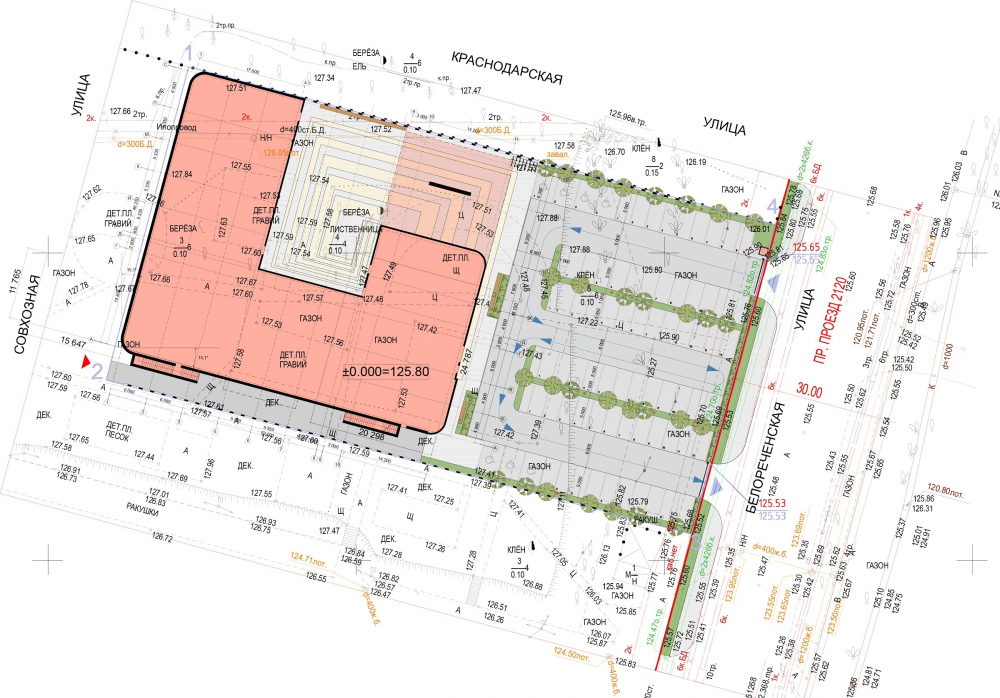 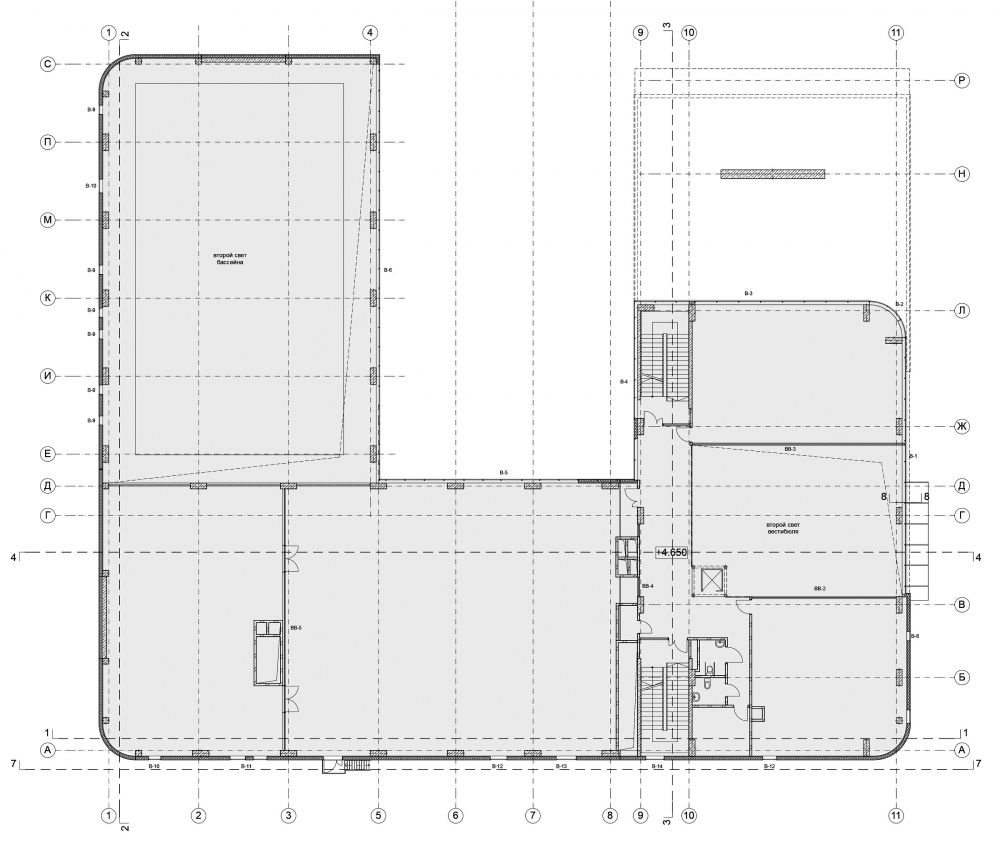 Basically, what we are seeing here is a clearly readable composition, motivated by the function and the specifics of the land site. However, the architects, strengthening some of the features, enhanced the building’s imagery – they made it look like a lizard that curled into a ball and is basking in the sun, straining its neck to peek into the garden. The role of the tail is played by the fence on the side of the park: its triangular silhouette starts from the ground opposite the entrance, and then grows up to the roof of the right wing, the tilted pylons growing denser as they approach the building, sparser in the beginning. The tail, this way, is not exactly a volume, which is right too – because a lizard can shed its tail. The further likeness is determined by the design solution of the façade – the diagonal pattern, set by the fence, continues on the whole building’s body: the metallic panels of a glittering brownish hue alternate with white ones; the windows, long and slanted, are also inserted into the dynamic pattern of tiled strokes, this all sheds a glitter, like a lizard’s skin, while the diagonal creates a feeling of a latent motion within this creature of a building. This same effect is also supported by the rounded corners: all the three outer ones and the curvilinear glass of the entrance underneath the cantilever. And the fact that the building is “curled into a ball” around the yard is enhanced by the large meander in the paving pattern. Meanwhile, our lizard is also a little bit of a chameleon: “the façade material is going through various transformations and is used with different frequencies” – Andrey Asadov stresses. Indeed, the eastern wall, the one that faces the Belorechenskaya Street, is not brown but terra cotta orange, and the panels become ceramic – which, first of all, makes the building more noticeable, because the fitness center must not be “lost” against the backdrop of the existing construction, at least in order to attract the clients. On the other hand, this “reddish” warmth also works towards creating a “creature” image, and one can even wonder at this point what kind of animal curled up into a ball – a lizard or maybe a fox. But then again, it’s not really important which animal that is. What is important is the fact that the glass “head” of the cantilever with a ground-bound chamfer is facing the park and the Church of Tatyana of Rome, reflecting it. The two unconventional-looking nonresidential buildings, standing against the background of rather dull prefabricated houses, get involved in a dialogue, which makes perfect sense for two public buildings, however different, in this sleeping belt neighborhood. The fact that this beast of ours – be that a fox, a lizard, or even a snail with a striped shell – is turning away from the residential houses, lying almost precisely with its back to them, also makes absolutely perfect sense. People come to train here in order to divert themselves from the stress of the hard day’s work, and the monotonous windows of the prefabricated houses are not exactly the kind of landscape that is highly conducive to emotional rest. However, the trees of the park and the church, a building that’s unique to at least some extent, are a different matter. Thus, the fitness center is open to greenery, especially its glass cantilever above the entrance; the main gym that it contains is well lit and opened to daylight and a positive natural view. Thus, it comes as no surprise that Andrey Asadov describes the building of the fitness center on the Belorechenskaya Street as both introvert and extrovert: wherever it’s needed, it coils into a ball, opening up when such an opportunity arises. Decorating the rounded corners became a challenge for the manufacturers of terra cotta and metallic cassettes: it was required of them to produce totally nonstandard elements, and slanting ones, too. All the ceramic tiles have been chiseled by complex guages: the overall curve was one and the same, but it was the tilted stroke pattern that added to the complexity of the task. The metallic composite cassettes have double curvilinearity. The joints between them are also very neat. Their size is more than 5 meters high, and this makes the building look more compact than it really is.

The Flight and the Balance

The dynamics of the volumes of this building is truly sporty because the fitness center (forgive me the sports and dancing terminology!) is there in the foreground. The building is focused on the park. The main terra cotta façade emphasizes that particularly vividly because it’s not solid, unlike the metallic one, but a long segment of its two bottom floors is made of glass, and it is just one terra cotta “leg” that remains, the whole building “leaping” forward with its park-bound cantilever. At the same time, the complex grows more transparent as it gets closer to the park. Meaning – its gravity center remains within the thick terra cotta part, i.e. in the “leg”. Also interesting is the fact that in the first floor the architects added a narrow window – the massiveness of the wall comes in increments, and thus gets lighter. The cantilever gazing at the park rests on a V-shaped support. “Together with the chief architect of the project, Tatiana Konovalova, we spent quite a long time working with designers in order to zero in on the crisp and simple solution. Ultimately, we came up with this elegant V-shaped support. Behind the glass, there is only a continuation of the slanted pillars, the rest being the overhanging cantilevered structures. We were able to achieve that because the floor and the ceiling of the cantilevered part are made from pretension concrete”. V-shaped columns make a very dramatic image in all senses. Construction-wise, they support the pretension concrete, while visually they look like muscles and tendons of an athlete. These tensed up “muscles” and stretched “strings” artistically express real forces that are in play within this construction. The tilting angles of the columns and “ribbon” windows on the façade do not match. In the enhanced tilt of the columns one can see something like athlete’s plunge at the start, something like extra acceleration. The V-shaped support is viewable on several floors in the interior, and from the outside through the glass. In addition, however trivial this may sound, V may stand for “victory”, which is appropriate in any sports center.

From the yard, which is due to be later on organized for open air sports, one can gaze either at the park or at the glass walls of the atrium. They form some kind of curious offline screens, upon which beautiful people in beautiful clothes move freely. The glass wall of the swimming pool also overlooks the yard.

The athletes behind the glass also enjoy the transparency: they can watch the would go by, and expose themselves to the world as well. This transparency is like the main luxury here. This sporty “theater” also has a commercial meaning: one can see at once what is situated where, and one see which new sports he wants to try.

The interior design is based on a combination of white, orange, and wine red. The theme of tilted V-shaped supports is continued in the interior by bronze columns, also tilted. Passing through the main entrance, the visitor gets into a spacious double-height reception area that also includes a bar, sofas, and tables for the visitors. This area opens access to the locker rooms and gyms with panoramic views. From the public area, once can also see through the glass walls what is going on inside the gyms and the other way around. The principle of total transparency, important for the architects, applies at all levels. In addition to the gyms, La Salute also has saunas and steam baths in it, a swimming pool with sea water, and even a Cardio Theater. The latter was proposed by the commissioner, Larisa Khanukhova: she took an active part in doing the interior design. 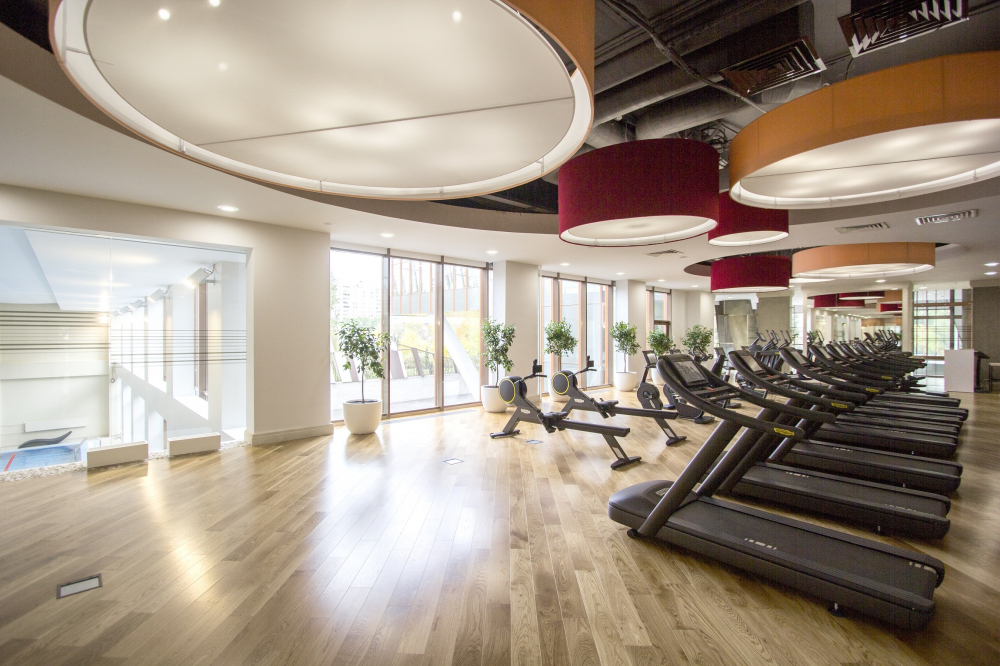 “The building of the club is outwardly dynamic, and we tried to keep this character on the inside as well, trying to make it look chic by finding some bright dramatic detail – Larisa Khanukhova is saying – This is how we came up with the idea of colorful lights: this cylindrical shape with a chamfered opening can be seen in Le Corbusier’s church in Firmini. From the functional standpoint, our club offers not just fitness, but an opportunity to relax as well. The Italian name La Salute translates as “health”. We tried to create a matching visual image by means of art and design: we placed art objects there, and decorated the Cardio Theater in the vein of the amphitheater in the city of Lucci”.

The theme of a sportive theater, as we can see, pops up here more than once. The same purpose is served by the green roofs of the building, which are not operated – yet – but the architects already designed an exit to them and provided for the low-maintenance “sportive” coating material. Doing sports on the roof will be quite a sight to see for the locals, and a great promotion for the club, too. This club, offering fitness and yoga, will be quite a big deal for this sleeping-belt neighborhood.
Text by: , Alexander Asadov, Andrey Asadov
Translated by Anton Mizonov