In the context of modernism

Vissarionov’s PAM have developed another "resort" project – a modernist residential complex for "Mamaika” area in Sochi. Three buildings which look like boomerangs on the plan, are placed up on terrace plateau-stylobate and are covered with “cellular cloths”

Jury Vissarionov's studio have already developed a number of projects for resort cities, some of which were featured in our news (Mountains, the sea and classical architecture; Digital mountain scenery). This one is done for Sochi, extensively being built up now city; it is located nearby Volgzhsky area and Anapskaya street. Environment is common for seaside cities – crossed landscape with height discontinuity of over 10 m, picturesque mountain spurs, and chaotic low-rise buildings. Only, around the 2-5storey buildings there surprisingly grows up the “corn ear of "Stavropol" hotel – a noticeable work of the Soviet modernism of 1970’s. It is the main sign of the area, and architecture of the future residential complex follows it. Typical low appearance of surrounding development has been dynamically changing – between the hotel and the new object there is already rowing high-rise apartment house, and afar, at the bottom of a mountain, there can be seen a high-rise city block. Residential complex by Vissarionov is of the same scale as these dominants are, but it is not higher than "Stavropol".

The authors said the idea of project arrangement was inspired by the image of "a boomerang on a mountain spur’s top”. All the three buildings "fix" its random placings. Twice boomerang "dropped" just about the same spot – here the 22storeyed construction “Б” crosses the 6storeyd one, turning with its "horns" in different directions, to the north and to the south. The second 22storeyed building "A” separated from the others and turned parallelly to them. "Boomerangs" grounded onto the plateau – a multi-leveled stylobate-parking compound geometry of which reflects the intricate configuration of the site itself. Except for the three constructions, there is a public block in the northwest part of the site, ellipse-shaped on the plan. Picturesque outlines of the layouts, broken lines of the stylobate’s platform and rounded roofs, complex plastics of the buildings are prompted by the surrounding nature – fancy forms of mountain ranges.

According to the architects, looks of the buildings was suggested also by the architecture of "Stavropol" hotel – in Jury Vissarionova's new complex there are clear features of modernism of 1970’s. And here is built a hidden chain of visually-associative signs of remarkable works of the period. Plastics of the building smoothly bent in the middle reminds houses-books on New Arbat, but here the picture becomes more picturesque and in some way playing. One "book" (“Б” construction) runs into another lower one, and the sides of the higher buildings are not equal, they go down in cascade manner, following landscape peculiarities. The other metaphor is related the important modernist principle “a house on legs”. Here all the three constructions are placed on the supports reminding famous "many footed houses" by Andrey Meerson in Moscow. Glass lift and stairs shafts number of which equals number of inner sections and galleries go down to the ground.

And one more level of associations caused by a characteristic cellular structure of facades, is close to Japanese modernism and in particular metabolism. Round and square cells-loggias remind of houses-transformers by Japanese architects Kikutaka, Kurokawa and others, with the same dense and scale grid necessary because of indispensability of high density settlement, and it is topical subject for economical housing in Sochi as well.

But all these are unreal relations, and there is a quite real dialogue between Jury Vissarionov’s complex and “Stavropol” hotel, not as a certain sign of modernism, but a real work which is a part of the nearest architectural context. It is noticeable that the residential complex has got some features of hotel are reflected. Apart from the “cellular clothes" of the resort centre, extensive loggias of storeys width were reconsidered and Vissarionov turned them into a grid of square and round gabs 2 meters deep. In some parts the net breaks up showing glass planes of apartments without loggias or a public facility in spots where the buildings “bend”. Tops are alike in both hotel and the complex appearance, and in Vissarionov’s project their functions have been reconsidered – under the "winged" canopies there are viewing platforms.

Looking at the side facade of the hotel, there can be seen similarity between the structure of its facades formed by diagonals of external stairs and the inner structure of the new complex. Its cut profile resembles this façade very much. Each building includes gallery part that is viewing the sea and the sectional part which is opposite. This allows achieving a most advantageous orientation of apartments. Common for us sectional arrangement is organized by the principle of staircases and contains galleries over every two storeys. Apartments are arranged with difference in 1/2 floor and this allows reducing the length of intraroom stairs. Every 2 or 3 floors layouts of apartments change – they either have 2, or 3 rooms, and there are offered variants, like two-level apartments, and with second light.

This project for Sochi developed by Vissarionov is attractive due to its scrupulous approach to the context. This architecture does not appear "all of a sudden", it is very natural here. History of the seaside resorts in the south of Russia is not presented only by Stalin period sanatoriums which Jury Vissarionov "remembered" in his Yalta project and in reconstruction of Sochi hotel "Camelia/Intourist", but also by more modern architecture, like "Stavropol", and it shapes the image of which was not challenged by the authors, but obeyed it. This "reverence" to modernism is wonderful because it addresses the heritage of 1970 importance of which is still remaining without attention. 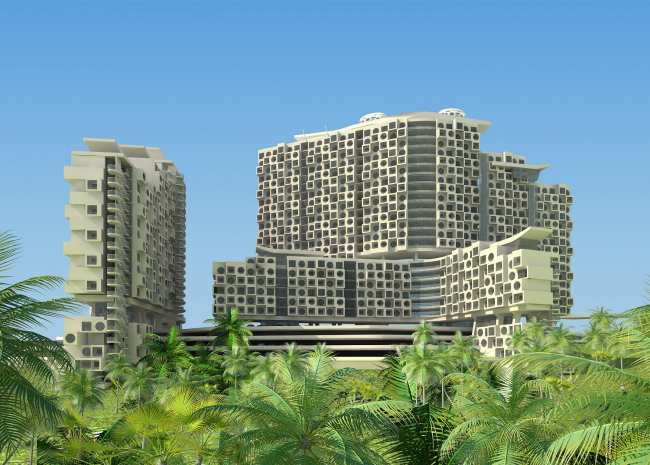 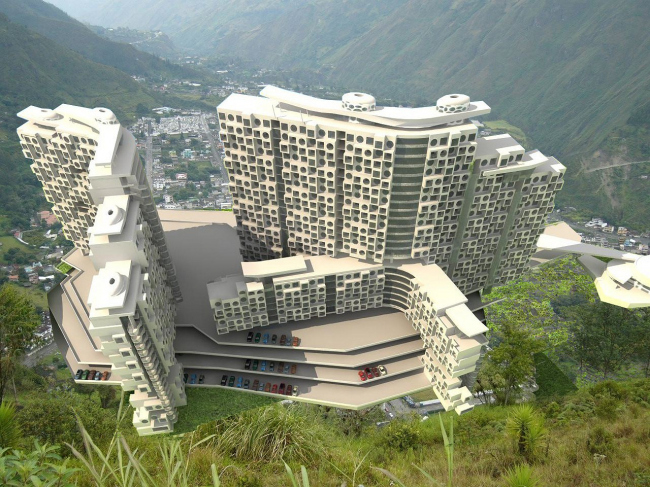 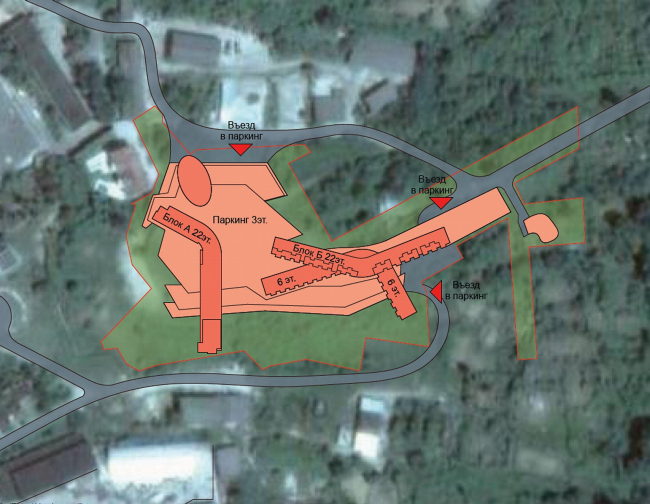 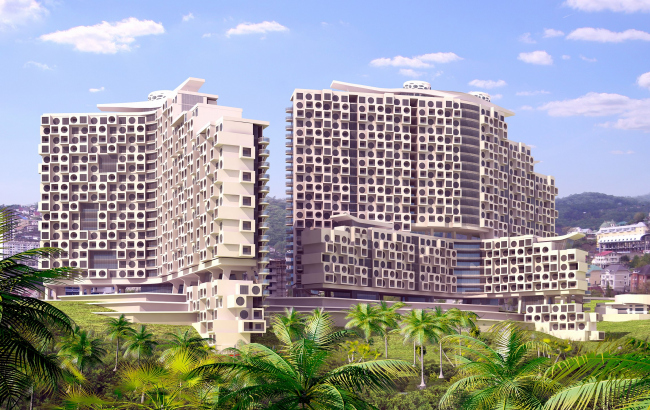 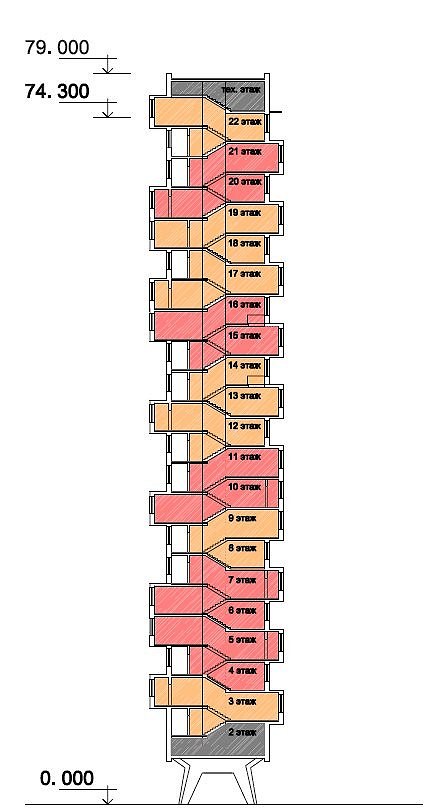 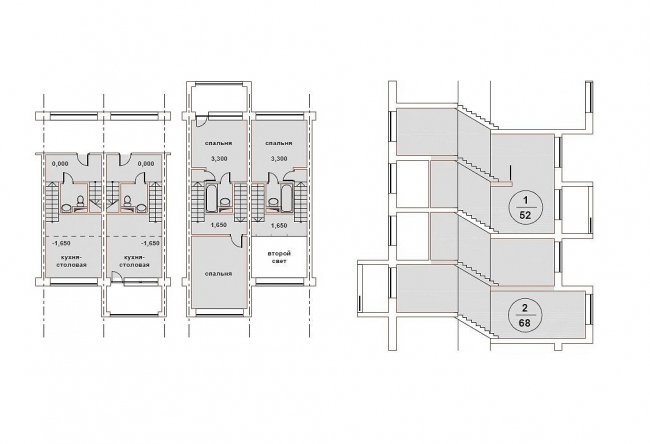