A search for unconventional approaches to urban housing densification, new ideas for background architecture and addressing the issues of a space with a negative aura – all of this is to be found in the new housing project designed by OSA for a land site that, among other things, contains an abandoned monument of architecture. 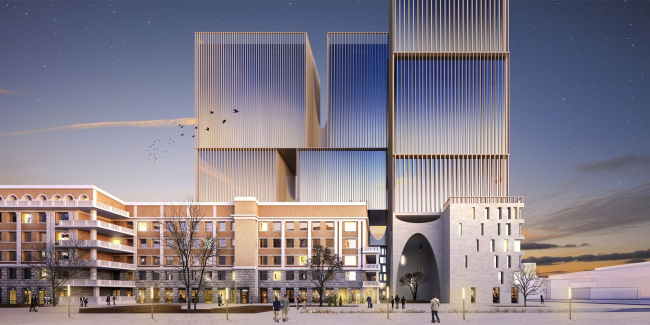 In the north suburb of the historical part of Ekaterinburg, next to the Bolshakov Park, on the 8 Marta Street, stands one of the city’s best-known derelict buildings – the emergency aid clinic that has the status of a monument of architecture of regional importance. The clinic was built in 1932; its architecture is interesting for the combination of avant-garde and neoclassical techniques. An arcade of thermal windows that crowns compound five-story buildings, columns, plasterwork, and the greenery of the nearby park make this building look more like a health resort rather than a hospital. In the 2000’s, the clinic was dispersed, and the building fell into decay. It stands open to this day, unguarded and unprotected in any other way. It has survived more than a hundred fires, and become the subject of numerous urban legends about there being a room where time stood still forever or a whole number of secret underground floors. In the nearest future, the building and the land site will be again put up for sale but this time around there are parties that are interested in buying it: developers are preparing pre-project proposals for the auction, one of them being the concept proposed by OSA.

The architects were faced with a task of turning the land site with a derelict clinic into a residential complex, which was a task fraught with a number of difficulties. First, the client had a request for 75 000 square meters of housing floor space, and squeezing that amount into the confines of the land site was quite a tall order because the monument of architecture is situated in the middle of the site, sprouting numerous auxiliary buildings. 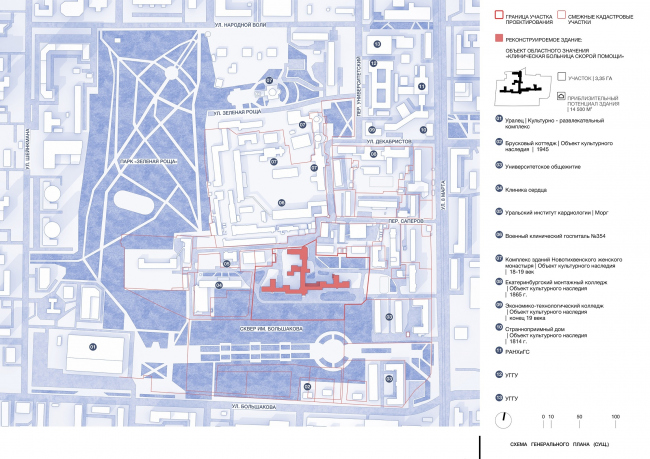 Second, the architects had a self-imposed condition of making sure that they kept the moderate scale of the architectural monument and did not obscure it with modern architecture. And, finally, this part of the city misses the infrastructure that is generally expected for a residential neighborhood – schools, kindergartens, adequate driveways, and so on. Instead, the future complex will neighbor on medical institutions, maintenance buildings, and a dull fence, which will be built by the Novotikhvinsky Monastery once it buys out a few buildings in the neighborhood. The architects confess that they are not 100% sure themselves if the city can handle such a “housing” injection in this area. However, they are still proposing an integrated and motivated solution for all of the problems outlined above.

Essentially, what remained of the monument is only its façades, which are to be preserved – everything else on the inside has been destroyed. Therefore, the floor plans will be changed completely, and the architects will adapt the contours of the building for the housing function. OSA was searching for every opportunity for densification, and at some point they even planned to add a few annexes to the old building – of the same scale but with neutral “background” façades. However, because the façades were to remain intact, there was only one loophole left: in the northern part of the building, there is an annex that was built in the 1990’s, which has no architectural value, and which is clearly seen on the birds-eye view photograph. By getting rid of the annex, the architects could quite righteously “augment” the architectural monument with a new building. This would not only yield some extra floor space but will also make it possible to complete the composition of the building, giving the architects a system of cozy little yards. In addition to the historical building adjusted to perform a new function, the site will get two types of new residential buildings – high-rise towers and something that the architects call “urban villas”.

The towers take most of the load of the technical and economic performance, allowing the architects to keep the historically correct scale on the rest of the site. Because of that, the high-rises will be placed in the northwest corner, which is the furthest from the park and the closest to the roads and city’s other high-rises. Considering the volumetric and planning options, the architects came to a cluster of three adherent sections consisting of large “slab” blocks with rather large spaces preserved between them. The five lower floors, whose height matches that of the buildings of the clinic, are decorated with light-colored stone. Everything above that mark strives be lightweight to the point of dissolving in the air. This effect is created by the “strings” of the lamellas that cover end-to-end glazing, as well as by slits with inverted arches that can host terraces or winter gardens. The same arches connect the new building with the historical one, echoing the dramatic rows of thermal windows, and, in addition, these arches endow the building with a fair bit of metaphorical meaning – what comes to mind is the Heaven’s Gate, portals of the gothic temples, arcs of the harp, and Giorgio de Chirico’s metaphysical insights. They keep up the aura of mystery, which is something that the clinic building definitely has, not only as a derelict place but also as a place where back in the day life would meet death. The most intriguing element of all is the arch of an impressive height that marks the point where new building joins the old one and where the entrance to the inner little yards is situated. The third type of housing are the urban villas four to seven stories high, which on the one side overlook the Bolshakov Park, and on the other – the new pedestrian street and part of the historical building. For the urban villas, the architects came up with two façade design options: they can either be completely decorated with light-colored stone, which will enhance the high status of this housing segment, or they can be decorated with the same lamellas as used in the towers, which will give the buildings a likeness to the park pavilions. In both cases, the architects proceeded from the old building of the clinic as the topmost priority – the new architecture must not “steal the show”. 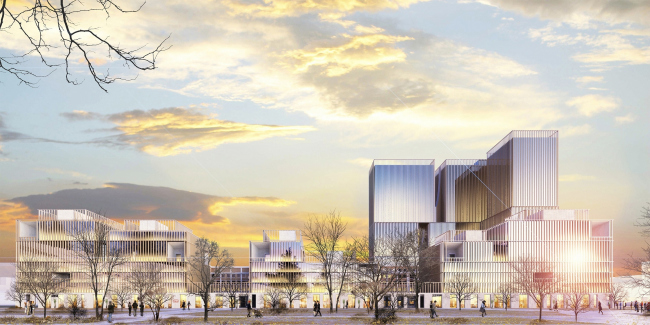 For the same purpose of showing the monument of architecture to the best advantage, the architects made spaces between the urban villas – the intermediate floors, which run on the level of the second floor and create yard spaces separated from the pedestrian street, are sometimes covered with a roof and sometimes aren’t, having additional entrances from the corridors on the second floors. The architects designed the “glades” with the circular square in mind – they used it as the main axis, from which the most picturesque views of the clinic building can be seen, and from which one can get to the pedestrian street.

he bottom floors of the buildings will host local businesses; one of the urban villas will host a kindergarten.

In Between the Architecture

The architects are proposing a few solutions to gracefully introduce the new complex into the city life. From the north side, it will be possible to buy out the neighboring land sites, which are currently occupied by auxiliary buildings. If these buildings are to be demolished, it will be possible to make a square in front of the high-rise cluster and add a roundabout, at the same time improving the driveways because this place is the only link between the complex and the city. Also, in the north the complex borders on the Novotikhvinsky Monastery. It may be possible to make another pedestrian street there commanding a view of the temple architecture, the prospect of which was in fact discussed between OSA and the monastery, the latter still insisting on building a tall fence in order to protect itself from the bustle of the large housing complex. 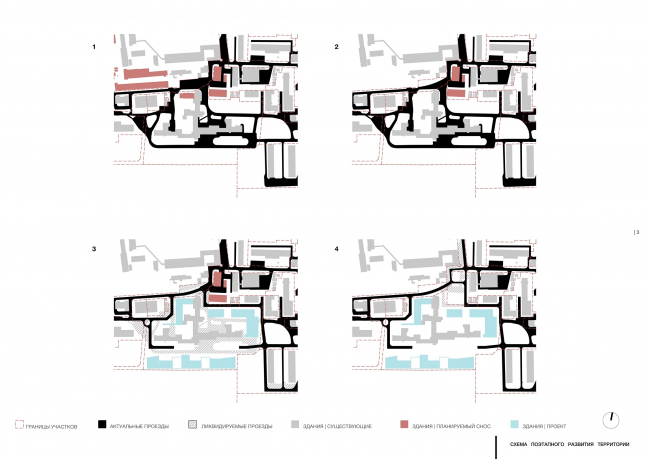 Green Coppice House. The layout of developin the territory in stages © OSAArchitects An important part of the concept is the pedestrian street that will stretch between the urban villas and the former clinic. The architects note that “the facade of the historical building was designed not for the frontal perception but for the glancing gaze of the pedestrian. The street will make it possible to better appreciate the beauty of the building from the best possible angles”. The street space is rather sophisticated, with a few levels in it: a raised promenade and a few little yards that cascade down to the underground parking garage. The street, just like the parking garage, are accessible to general public, not just to the residents of the complex.

The design of this new fragment of the city space proposed by OSA to Ekaterinburg turned out to be very dense and filled with functions, viewing angles, and meanings. This is a place of the peaceful coexistence of new and old, public and private, elite and democratic, and even underground and overland. A place that – provided the project is implemented, of course – will probably attract people with its interesting polyrhythmic structure that will become part of the new urban space, which will be a case that is rare not only for Ekaterinburg but for this whole country as well.
Text by: , Stanislav Belykh, Vassily Krapivin
Translated by Anton Mizonov