A. Asadov’s studio has been developing projects of the two retail and business complexes, in Tumen and Lipetsk. The have similar typologies, both consist of a retail centre and office tower, and their images are different: one is sharp, angular, mobile, the second is composed and quiet, plastery, compact. As though they are the two brothers with different characters

Modern city wherever it would be, in Europe, America or Asia, is multilayered, each epoch it has gone through, added some of their features. In Russia, some time ago squares with monuments to Lenin and houses-communes took places of manors, and now there are significant developments of "market" age – large retail centers, malls, as they are called in America – parent of their. This quite new tendency is about making them a part of mixed-use complexes, joining with public spaces – shops, cafes, cinemas, and also with office towers and hotels. Must say today this typology is a hit, Moscow architects and developers have actively been developing it. On order of “DVI Group” A. Asadov’s studio has developed the two projects of retail centers united into a single ensemble with an office tower, in Tumen and Lipetsk. Both of the complexes claim to become a new city’s dominant, a kind of "lighthouse" visible from anywhere afar attracting people. By typology and even by color the complexes are similar, but differ in their architectural ideas.

Complex in Tumen is a part of large concept of territory reconstruction of the former factory, it was also suggested by the studio of A. Asadov. Along with the retail and office building there will be a large sports complex with an aqua park and some residential towers rising from an artificial landscape of the roof of another 1storeyed volume. Realization of the concept starts with project of the shopping center.

Its core part is a long 1toreyed volume at the end of which a huge screen-bridge curves like a snake, it is partially raised on support and legs and dives under the office tower. V-shaped on the plan office building rises over the entire complex and surrounding development. For a moment pattern of the facades reminds of half opened theatre curtain where a curved bridge had slipped to be behind the scene of all this performance. In front of the mentioned screen-bridge the authors suggested to place a small square and an amphitheater for city holidays. The new area will harmonize with the interiors of the complex, which arrangement – curved small streets with shifted cells of shops – imitates a sense of moving along an old city when you do not know what is there over the turn. According to the architects’ plan outer and inner cities interact, creating somewhat community. Outside the complex looks pointed, mobile, hardish and energetic, as if it consists of the copper-glass strips which are growing together into buildings by some unknown hidden mechanism.

Architectural solution of the retail and office complex for Lipetsk is different – here construction is like a submarine with streamline and flaking surfaces. The "boat" emerges in an urban space, and the high-rise tower serves as a "periscope" rising higher see better everything around.

In order to unite visually retail facilities and the office tower, architects covered them with roof of a fluid form that "embraces" buildings on top, and somewhere – and sideways. Warm orange coloring is like copper, and roundings of angles intensify this metal similarity – being wrapped into such envelope the huge complex looks reasonably compact, at least – integral. In some parts this "wrapper" is peeled off, like someone has cut it on stripes, and the general stripeness of the coloring upholds the play. According to Andrey Asadov, legend of the place helped the architects in developing the project – “in Lipetsk there is a huge metallurgical industrial complex. We imagined that our covering is a piece of metal which have been unrolled and wrapped up it a building”. Considering broad enough area of the roof, architects tried to find it a useful appliance, having arranged there areas for open cafes and additional green territories. Wrappness of the main volume breaks through effective canopy over the entrance – it is extended far and cuts the area of parking in two parts, inviting potential visitors.

Must say both complexes use the theme of metal in a combination to glass. This metal – brownish-orange creates between them a color generality, but it defines also distinction. In Tumen glass facades are covered with stripes reminding a sculpture, cut out of rusty iron (very popular now and not cheap material). Sharp corners, wide gaps, some strike of romantic brutalness are peculiar to it. In Lipetsk parts imitating metal remind copper – flexible and warm. Comparison is figurative however it helps to imagine difference of the alike constructions.

A mixed-use complex in modern city is an important public space, a city in city. In the two projects of mixed-use centers A. Asadov’s studio made an attempt to create such complete city formation which would become a new dominant of Tumen and Lipetsk. 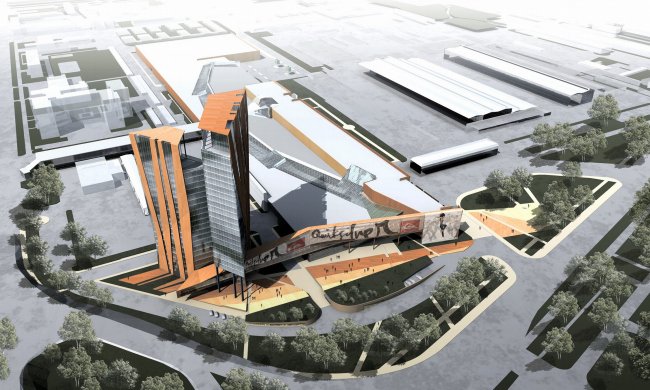 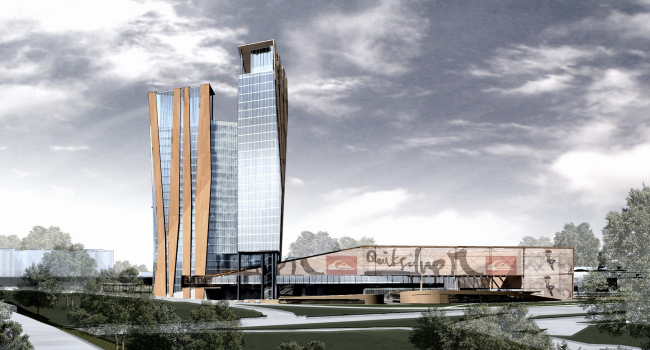 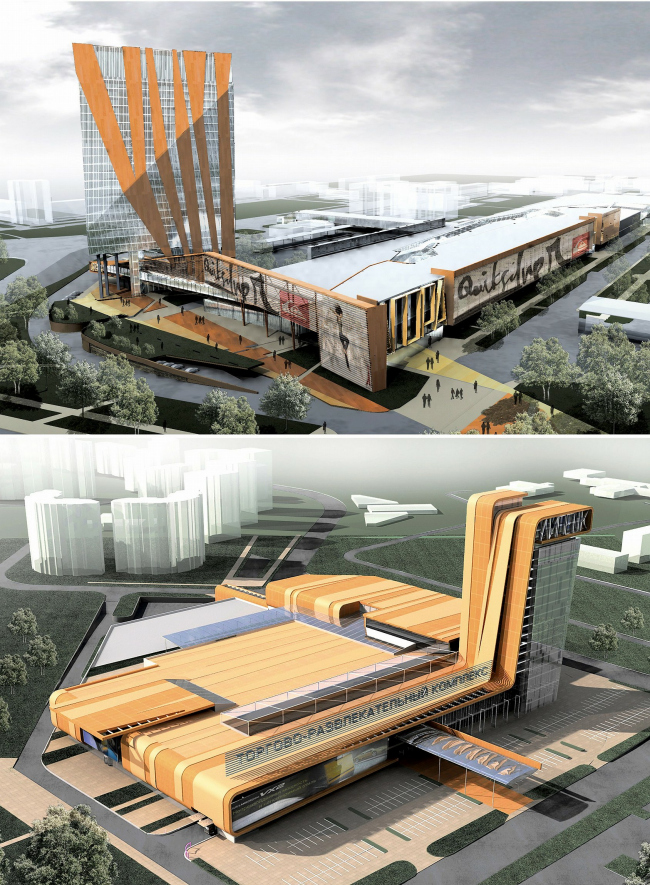 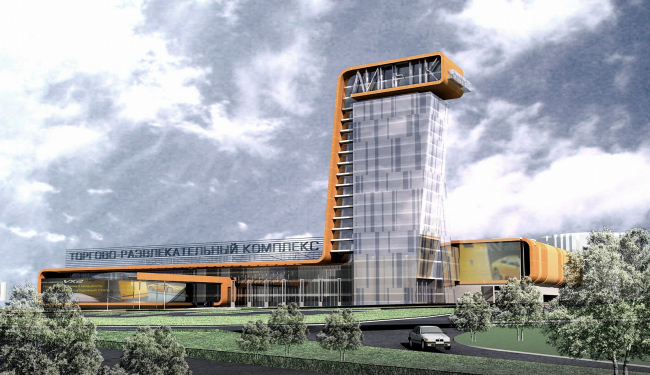 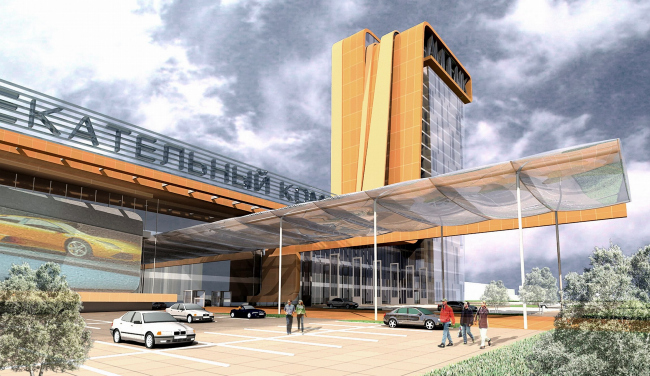