Lens in the Spirit of Maurits Escher

The architects of UNK project brought back to life a difficult yet promising land site next to the “Prospect Vernadskogo” metro station, building the “Academic” business center upon it. The thought-out functional program, technological innovations, and special attention given to forming the building’s identity helped to successfully overcome all the challenges. 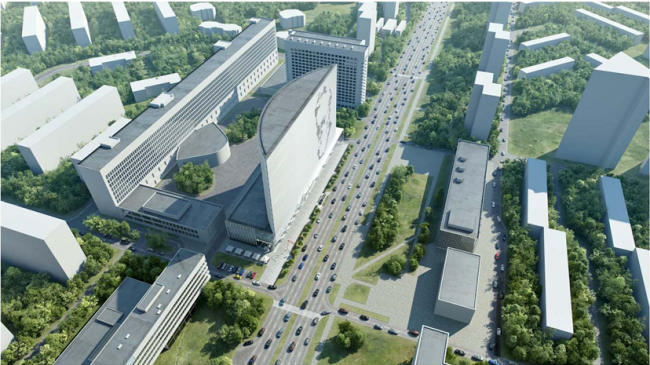 The land site on the Prospect Vernadskogo, 41, next to the metro station bearing the same name, is a complicated one to the point of being ill-starred, but at the same time really interesting and promising. The narrow strip of land stretches along the avenue, squeezed between the thoroughfare and the building of “Moscow Regional Union of Consumer Cooperation” (MSPK). With its height difference of about three meters, the local terrain adds to the complexity of the situation. The mid 1990’s saw an attempt to build something on this site but they never got past building just some of the structures here. Since nobody gave any thought to conservation, the building’s structures lost their functionality and were dismantled – what was left of the original building was only a substantial part of the basement. The project of the new multifunctional complex “Academic” that is supposed to rest on this basement was developed by UNK project. The architects tried to make it fit in as nicely as possible with the context of a rather complex piece of city fabric. 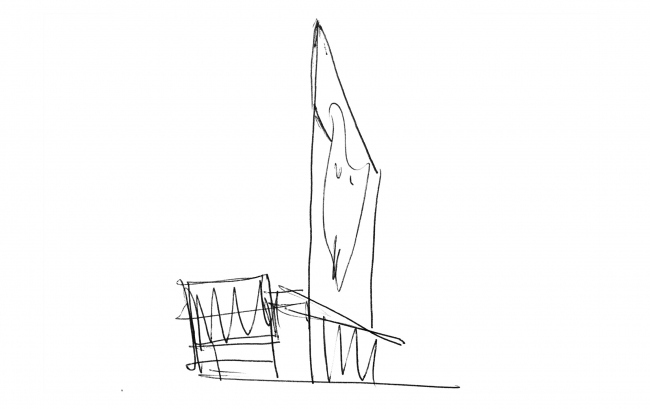 The visible part of the building consists of a rectangular podium four stories high, and the main 14-story volume designed in the shape of a lens. The vertical aluminum lamellae, that decorate the main volume, run down to the ground and unite both parts. Such a solution allowed the architects to create a beautiful “picture” façade on the street side, upon which, by using the lamellae of a different section, they will “draw” a schematic portrait of Academician Vladimir Vernadsky. The shape of the thin lens with sharp edges – which immediately puts one in the mind of the Joint Staff building designed by Carlo Rossi – allowed the architects to keep the views of the MSPK building that stands in the depth of the site, and avoid violating its insolation at the same time. Furthermore, the architects were also able to build up a dialogue with the neighboring building. Built in 1986, it was formed by the elongated rectangle of the main volume and a massive rounded entrance group. This way, the space between the neighboring buildings gets a whole number of oppositions and parallels. And, finally, the simplicity and clarity of shapes, the white color of the façades, and the aluminum used for the decoration, all help to inscribe a new and totally self-sufficient volume in the context of the late-soviet modernism, very important for, if not defining, the overall architectural image of Moscow’s southwest. “The area between the “Prospect Vernadskogo” and “Yugo-Zapadnaya” metro station has a historically formed “face”, and building here 20-30 story monsters with pitched roofs and brick coating would be a slightly strange, not to say disrespectful, thing to do – says the leader of UNK project, Julius Borisov – However, upon a closer analysis of the surroundings of our future building, we at once realized that we would not try to imitate any of the local stylistic devices (verbatim simulation rarely brings decent results, if at all) but would try to be as respectful as possible to the surrounding architecture of the 1960-1980’s. To me, not only as a practicing architect but also as a professor of the restoration and renovation department of Moscow Institute of Architecture, this topic of recreating the city fabric and the relationships between the historical context and new buildings is very interesting and important”. 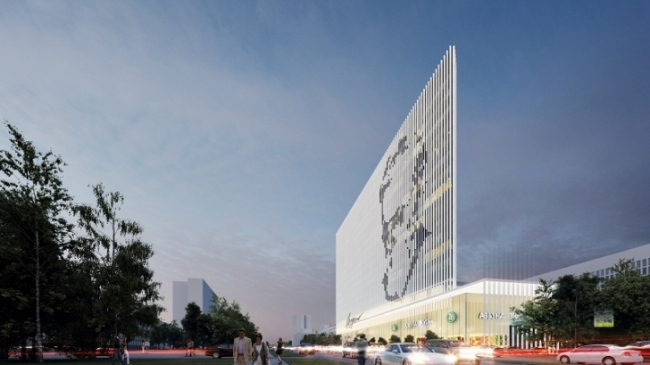 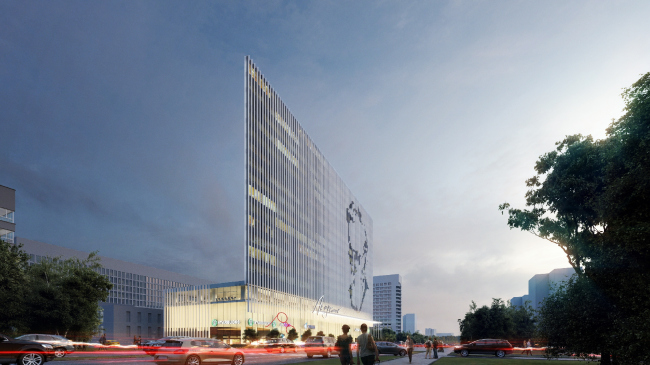 At the same time, the structure of the new building is quite complex and has several layers in it. The architects provided for two underground floors that will be fully occupied by a parking garage. Thanks to its large windows, the tall ground floor will be closely connected to the urban surroundings; it will host shops, cafes, and entrance zones of all the building’s functions. In spite of the fact that the traffic way is situated in a very close proximity, the architects were able to create quite a comfortable public zone, and even provide the space for a noteworthy sculptural object – a giant pair of 12-meter glasses that repeat the recognizable shape of the rims of Academician Vernadsky’s glasses. The scarlet art object is designed not only as yet another means of forming the building’s identity but also as great landmark. 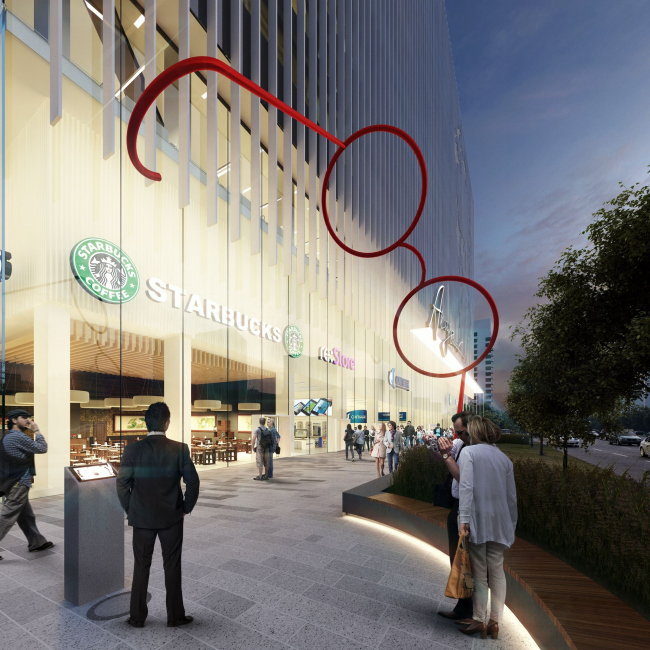 The second and third floors will be occupied by yet another parking garage with an independent entrance – that was the only way to arrange the required 520 parking places. The fourth upper floor of the podium is given to a restaurant and a small hotel. And, as for the uppermost lens-like volume, it is fully given to offices. In spite of the unusual form with acute angles, the architects were still able to minimize the volume losses and achieve high efficiency of using the floor space. An important role in achieving this goal is played by the position of the nucleus that is placed against the central выпуклой part of the rear façade. This also helped to open all the office floors in the direction of the park and design panoramic elevators and halls with natural ambient light. Thanks to some unconventional solutions, for example, the somewhat unexpected but still possible from the standpoint of construction rules and regulations idea of joining the elevator halls and emergency corridors, each of the operational floors can be divided into four independent blocks. At the same time, the comparatively moderate depth of the upper slab will make it possible to deliver the sunlight to absolutely all of the office zones. 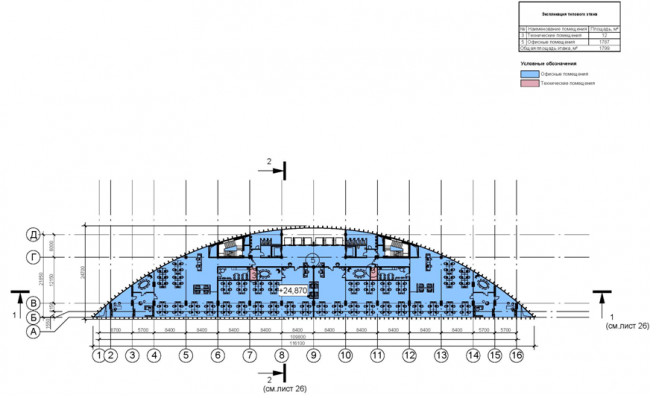 It is obvious that such a multifunctional and at the same time compact structure, very much like a layer-cake, required a really though-out and calculated planning, attention to every little detail, and rather courageous technological moves. Thanks to the natural height difference, the architects were able to avoid the necessity of building ramps on the parking floors, and just make sloping driveways for getting in and out of the parking garage. The premises of the first floor are not situated on one and the same level – they follow the terrain profile, which allowed the architects to organize convenient entrances accessible directly from the street. The economy of floor space proved to be significant but the sophisticated calculations a lot of extra time and effort from the designers and engineers. Yet another technological novelty is using large-span structures. In order to achieve the impressive span of almost 12 meters, the architects borrowed from the commercial construction the technology of plastic blockout poured into the floor slabs. Ultimately, they were able to significantly increase the efficiency of the parking floor and create a flexible office space.

“If it hadn’t been for the BIM technology that our company used in designing this building, we would have hardly been able to calculate this multidimensional puzzle in the spirit of Maurits Escher, let alone inscribe into it the engineering systems in a smart way – says Julius Borisov – The correctitude of our calculations was checked up by two independent teams, and I am very grateful to our clients for their trust and patience”.

The construction of the complex has begun and is expected to be completed by 2020.
Text by: Yuliy Borisov, Anna Starostina
Translated by Anton Mizonov