A guest house designed by Roman Leonidov bureau echoes its prototype - the main house - but it also creatively revises a few interesting and recognizable techniques. 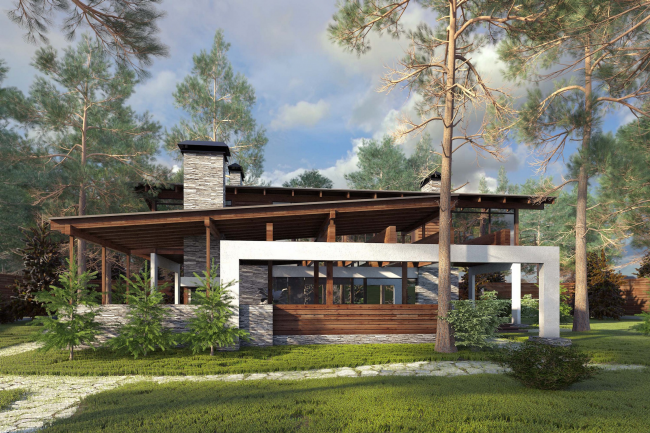 A few years ago, in the near-Moscow area, at a picturesque land site surrounded by a thick pine forest, upon the project of Roman Leonidov, a house was built of natural stone and dark wood. A little later on, its owners - people used to an socially active lifestyle - decided to build for their numerous guests yet another independent house of a smaller size. Being satisfied with the original result, they again turned to the same architects - Roman Leonidov and Anastasia Leonidova. The guest house was named "forester shack", even though its total area is far from being a "shack" kind - 265 square meters - which, on the other hand, is about a seventh of the total square footage of the master's villa (1892 square meters). The "shack" is situated a little stretch away from the main house, on a well-lit clearing in the thicket of the pine forest, and, thus, it is all but invisible behind the tree trunks if viewed from the main house. Nevertheless, its architecture is resonant with its prototype, inheriting the themes that were set earlier on: just like its "elder brother", it us built upon the contrast between stone framework, dark wood and glass. However, the guest house looks more pristine. In any case, more pristine if compared to the main house that embraces its yard with a semicircle of terraces looking like porticos with their arrays of slender pillars; in the case of the guest house, however, all the lines are straight, and all the sections are right-angle ones.

The bulk of the first floor is made of concrete, and, just as the basement floor, is coated with thin stripes of rugged dark-gray stone with pipes shooting up asymmetrically on the sides. The top floor is wooden, and both floors are pierced through by lots of stained glass inserts and wide floor-to-ceiling windows that make the volumes look permeable and transparent, lighted up on the outside and opened to the beauty of the forest scenery from the inside. "In this project, we implemented the technology that in the recent years we have been actively developing together with Newood Company: it is about taking the half-timber structure and adding to it virtually any other material you can possibly think of - Roman Leonidov shares - In our specific case, it is timber and stained glass. In addition, I am a big believer in the potential of large-span structures that the glued wood technology provides".

The house does actively interact with its environment by surrounding itself with a broad and differently-styled framework of terraces, stanzas, and balconies. The largest of them is the barbecue place situated parallel to the rectangle of the house and connected to it with a short bridge made of wooden floor-boards. Its upper border is formed not only by the sloping rain awning but also partially by the permeable grille of beams, run in between the volumes of the "stone" and "wooden" stories and creating an effect of "air layer" or maybe even of the levitation of the second floor that looks not so much as it is resting on the stone base but rather like it is ready to slide down the guides. In addition, one of the side surfaces of the second floor stands out in a deep cantilever above the base, so one might think that the second floor is actually already in motion. Yet another terrace - rather more like a stanza balcony - rests on the roof of the bottom tier on the other side of the house, opposite to the "barbecue" side. It must be said that the balconies, the long overhangs of the sloping roofs, and the stone basement of the bottom tier - all these are quite recognizable elements of an Alpine chalet; on the whole, however, the house looks very little like a chalet, it's just that some of it fragments can evoke the tell-tale associations, especially if one is a passionate skier. The balconies and the terraces, along with the unshielded beams and window frames resembling the portals of a stage box, surround the house with a curious kind of transparent semi-openwork construction. The resulting effect could be best described as "architectural deconstruction" - from the "spectacular" viewpoint, the house reveals to the observer almost the very core of its structure. An important part is also played by the theme of a garden gazebo, and the hot-lately theme of a ruin, also either of a "park" or "antique" kind: the white frames bear a resemblance, however distant, with the marble frames of the entrance sashes that are a rare sight but still to be seen sometimes at some late-Roman ruins. Letting your fantasy wander, one could imagine that he or she is standing in front of the remnant of some stone building that was later on overbuilt with wooden volumes but not completely - this way of thinking based on a fiction but still unobtrusive story is also rather topical nowadays. Besides, the house, opened up to the forest in a graceful and picturesque way, is quite appropriate for the tasks it is meant to perform: pastime in the forest, barbecue, tea parties on the terraces, and contemplating the pine trees from behind the awnings.

Widely opened into the space, the house is as light on the inside as it is on the outside. The first floor is almost completely occupied by a large living room - which is also the room with a fireplace, a kitchen, and a dining room. This is the main and the most eventful place in the house - with a recreation zone by the fireplace, a bar counter, and a large dinner table. The wall that faces the barbecue terrace is almost completely occupied by a pull-out glass partition - in the summertime, it will be possible to open it up completely. As the author of the interior design Anastasia Leonidova shares, apart from the visual rhymes with the main house, the customer asked to add "more color, more light, and more life". Hence - the contrasts of textures and colors, for example, the light travertine and the dark oak or the dark-gray concrete and the white surfaced of the kitchen furniture. In order to enrich the palette of emotions, the authors also indulged in using various textiles - carpets on the floor and light boxes on the ceiling, and even some eclectic notes: pieces of wooden Malaysian furniture go together with more democratic modern ones.

From the living room, a futuristic stairway leads up to the second floor: the concrete steps, growing "spontaneously" travertine wall, hang in midair, perfectly viewable through the transparent railing. The bedrooms on the second floor change the tense contrast for a cosy harmony of the light-colored walnut with an odd fraction of stone and opaque glass of the doors. 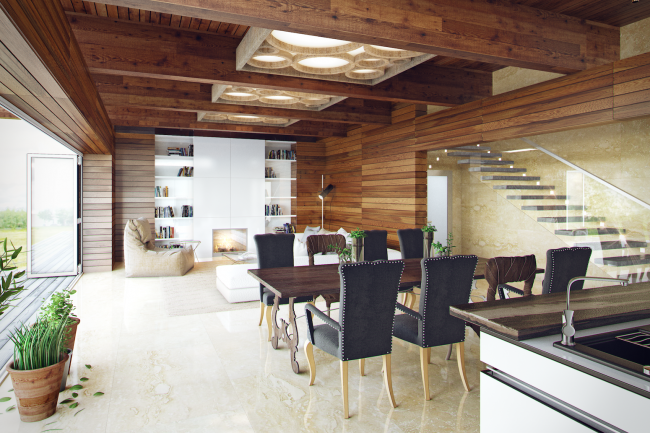 The authors are convinced that that the house develops the tradition of organic architecture because it adapts to its natural environment and used natural materials. Which, obviously, is the case. From the plasticity standpoint, this project is reigned by the principle of a balanced contrast poising on the verge of tradition, deconstruction, and eco-minimalism. It not only provides the interflow of spaces and impressions but also ensures the cohesiveness of the architectural ensemble, the resonance between the major house and the minor one. And it also allows the observer to recognize the signature style of Roman Leonidov.