Roots of an Old Oak Tree

The architectural bureau PANACOM has designed a private villa in the protected zone of the Big London. 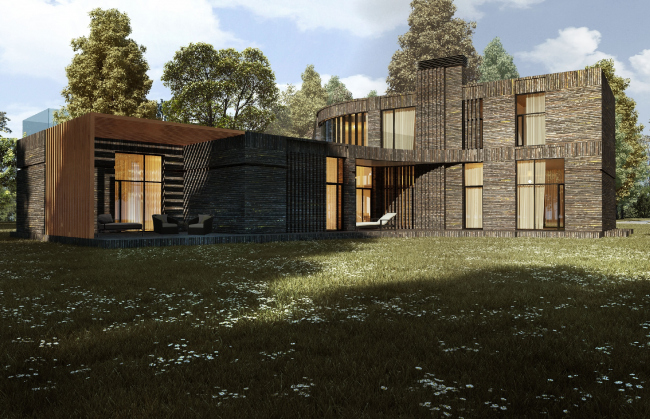 The house will be built in a unique place, the so-called London's Green Belt. The customers wanted to ultimately get a house for a large family with servants, garages, and technical premises. On the one hand, it must meet the requirements and the living standards of the XXI century; on the other hand, it must not by any means violate the traditions of the place. London's Green Belt has a shape of a ring from 8 to 32 kilometers wide, its total area being three times as large as the area of the city itself. After World War II, the British government had to deal with the issue of the expansion of the cities, including London. Thus, as a result of re-planning the British capital done in 1944 by the architect and urban planner Sir Leslie Patrick Abercrombie, London's Green Belt appeared. Inside it, significant restrictions were imposed on the residential and industrial construction that is now subject to rigorous regulations.

It was this very circumstance that defined the character and the configuration of the building. It is situated at the picturesque land site with total area of 4100 square meters covered with oak trees, willows, and bushes. Each of the trees has a protected status. The height of the building is limited to two floors, the area of the above-ground part of the structure being limited to 830 square meters. It consists of three "wing-buildings": a spa with a pool, the master's and the children's parts, and the servants' room. On the plan, all the three wings are joined in the center by the hall and a double-height stairway. Like the roots of a century-old oak, different in their length and thickness, the wings prowl the land-site. The bent arches of the three facades embrace separate land sites organized into three different gardens: the grand one whose view is commanded from the land site's gate; a private spa park hidden by the tree branches; and the rear one commanding the views of the descending landscape and the golf courses. 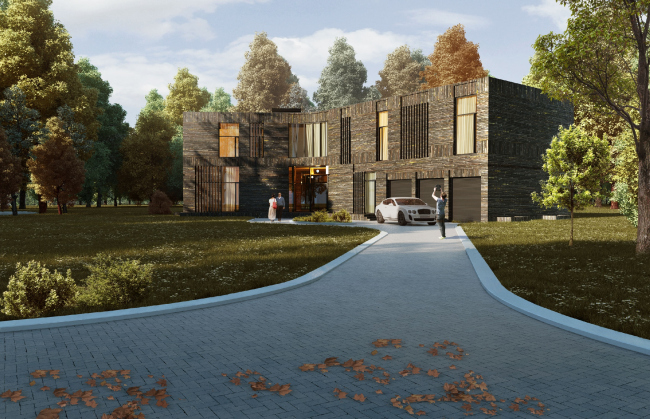 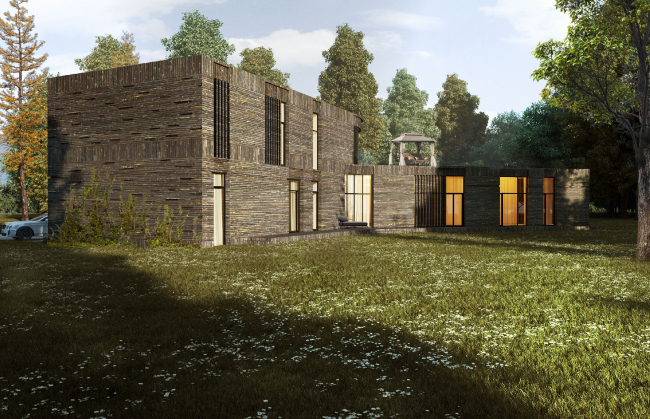 For all its "agility", the villa is executed in a single material. For the finish, the architects chose a brick of one sort - the English kind, dark-colored, but diverse in its texture: somewhere smooth and somewhere rugged... We wanted to stay within the boundaries of the local tradition - shares the author of the project Arseniy Leonovich - where the Victorian structures use the traditional materials: brick and plaster".

The facades look as if they were drowning in the feast of verdure. And the house itself springs organically from the surrounding landscape. There are no unnecessary extra details here - only the modernist plays of planes: glass, brick, lined up in two rows in a syncopated rhythm. The windy climate imposed tough restrictions on glass, and this is why glass is pretty scarce here - Arseniy shares - we've got more glass in the pool, and the bedroom and the living room have more than enough of it. But the walls are indeed walls here. What we ultimately got is a very functional house with all of its premises carefully planned out. The three prismatic parts meet together in smooth lines in the center forming the space of the hall, the anteroom, and the kitchen-living-dining room, all rolled into one. "Unlike the geometrically sliced rooms and maintenance premises, the amorphous space in the center of this hall conditions a rather freehand geometry of the stairway - Arseniy Leonovich comments on his project - in our case, there is only one stairway that is curved into s ball". Besides, the house has two lifts in it - the passenger and the technical ones. One can walk through the house end to end lengthwise and breadth-wise. From the second floor, one can also exit to the terrace of the swimming pool block.

The architecture of the house in Green Belt listens carefully to all the messages and restrictions of this place, this architecture is really unobtrusive, the house fitting in perfectly with its surroundings. A private house in London's Green Belt. Plan of the basement floor © PANACOM 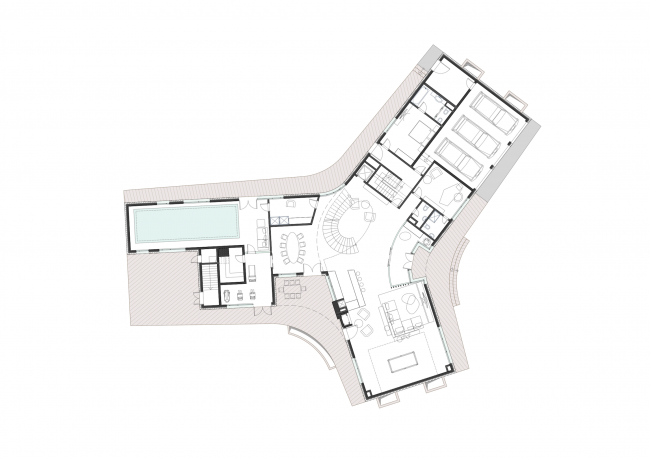 A private house in London's Green Belt. Plan of the first floor © PANACOM A private house in London's Green Belt. Plan of the second floor © PANACOM