Roman Leonidov got a completed but still not-too-load-capacious basement, and an adventurous creative-minded customer that was not afraid of experimenting - which lead to the appearance of a house that one could even have a hard time coming up with the name for - an "X-house". Located in a small settlement near the Pirogovskoe Lake and amidst the picturesque surroundings (woodland on the one side and the lake on the other), the house, as is often the case, ended up in the hands of Leonidov's bureau with its basement floor already complete in accordance with the previous project - its plan and even some of its proportions and outlines were already defined. The owners of the house, however, the open-minded people opposed to static and symmetrical forms, we're looking to get an "unusual" house and asked the architects to come up with something new, something that would look different from its neighbors. The surrounding nature, according to Roman Leonidov, also urged him to look for an unconventional futuristic and sculptural shape.

Besides, the incomplete house had in it a fair number of project mistakes and issues that, according to the architect, had to be dealt with literally on the fly. Roman Leonidov recalls that the image of a modern and versatile "not even a house but rather an ocean liner" came to him almost at once. On top of the new project that the customer wanted to remake and improve, new shapes would appear juxtaposed on one another. Without tying themselves to any particular style and without looking back to any modern fashionable trends, the architects were creating new volumes and contours, new details and composition elements that were pivoted on the already-existing central nucleus, transforming it completely. 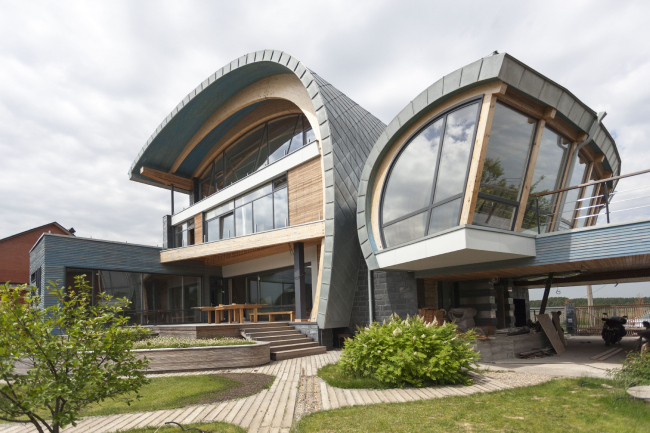 Thus the house turned into a metaphor of a ship that stood proudly under its sails filled with the wind, some fantasy ship in an imaginary sea. There are two sails and they look at one another - which never happens in real life - and it looks as if the romantic image is deliberately confused by the cubist artist that cut it open and turned it inside out. The curve of the sail, however, is drawn in a precise and energetic stroke, and it seems that the smaller sail, resisting the force of the wind, is "hurrying up" the larger one, not letting it lose its way.

The theme of this architectural image can be also regarded in a different way: the curved marquee, efficiently using the bent beams of glued wood, covers the main three-story volume bringing it to the ultimate degree of generalization. It would have looked lonely had it not been for the two minor volumes supporting it from either side: one of them follows the curve of the main sail on a miniature scale but proudly turns its back on its "parent". The other one, double-height, and including the communication nucleus of the stairwell and the elevator, is covered from the outside by a sloping "screen" wall and grows wider at the top. The plans of these two minor volumes are exquisite curves. Having ribs inside of them and covered with aluminum scales on the outside, the large forms of bent wood are combined with the Corbusier white slabs of the intermediate floors and panoramic stained-glass windows, the Mondrian pattern of the metallic window sashes and the corner supports. The picture is completed by inserts of natural stone placed at the bends of the marquees, and by the openwork railings of numerous balconies. Apart from the "ship", the result looks a bit like a giant insect or dime space apparatus that has just landed here and is now opening its hatches, capable, if necessary of curling back up into a silvery ball. Special skills were required from the designers: apart from the fact that the building has quite a peculiar configuration, they had to take into consideration the peculiarities of its framework that the building inherited from the original project. The detailed examination of the already-existing part showed that the house could be built over but could NOT be made any heavier. For this very reason, the architects introduced the framework walls, the rigid disks of the intermediate floors holding the large volume from sliding horizontally off-center, and the vertical rigid nucleus that fixes it on the steel multi-strand cables. The structure of the top floors is predominantly wooden, which also helped to solve the weight issue (the house made the nominee list of "ArchiWOOD" whose winners were announced late in May at ArchMoscow). Incidentally, one of the interesting features of this house is the virtuoso combination of different construction materials. When viewed from the outside, the metal cornices look metallic, while the concrete parts of the ground floor are coated with wood panels of a cold water-resembling shade. Together, this produces a really surprising effect - at a first glance one cannot tell just what this thing is exactly made of. Besides, the very materials behave in an unconventional way: the wood, normally meant to look like shafts and beams, gets bent beyond recognition here, while the concrete that by default is meant to be poured into just about any shape humbly sticks to being a flat surface; even the arrogant stones are tucked away in the cavities between the "sails". The interior design of the house is quite logic and includes a lot different things, from the spacious bedrooms on the second floor to the master's studio under the bent wooden beams on the third, and the exposition space, a mini exhibition in the double-height hall with a stairway. Quite expectedly, there is also a spa, a gym, and a dancing hall next to the dining room on the first floor; from the dining room, one can enter the "minor sail" which is in fact a sunlit terrace glazed from three sides, and from there - go out to the open balcony on the roof of a broad П-shaped marquee that serves as the awning for the guest parking lot. The underground tier has in it the maintenance rooms; an individual block next to the main entrance having in it the living premises for the service personnel and the garage. The architects carefully thought out the vicinity of the rooms inside the house and arranged them in such a way as to provide access from each one of them onto the balcony or the terrace. The diversity of the forms and functions is offset by the somewhat ascetic quality of the interior design in which the main part is played by the daylight that easily permeates the house through the transparent walls. Apart from that, the house is oriented in exact accordance with the cardinal points: the sun goes round, lights up some rooms, then others, and plays on the bends of the walls, the furniture, and the ceiling. Leaving as many as possible flat and smooth surfaces, the authors use for decoration the most simple materials: light-colored stone, wood, concrete, and stucco. At some spots, metal, glass, and leather appear. The absence of color "en masse " is compensated by unexpected local "flashes" in the form of bright furniture or multicolored textured fabrics. The main facade is turned to the water, as well as most of the open balconies and terraces. The landscaped yard gradually bleeds into the lake shore with the cobweb of its trails - later on, this place will get a grain garden and a lawn of bright flowers.

This house is far from "simple", it contains a tense "inner dialogue" - suffice it to take the two arcs that support the energy of the main theme: instead of comfortably snuggling together, the main volume and the adjoining terrace turn away from each other, arching their backs, although still keeping an obvious resemblance. An argument instead of a hierarchy, a depression where you might be expecting a smooth descent, and the play of textures and the habitual roles of different materials that supports this "vocal harmony": the metal-sheathed bent wood, and the plain concrete masked to imitate the wood - the house looks as if it were taking itself apart - and then puts itself back together again, being the perfect master of the language of deconstruction: the manifestation inside this tense shape of attraction and repulsion is akin to the atomic kind, like the alternation of volumes and rests. Meanwhile, in spite of this tense animated plastic dialogue, Roman Leonidov was able to avoid overloading his author gesture with excessive detail but subject it to the meditation of the landscape. But then again, while sharing about his project, the architect stresses that he was only able to achieve the desired result through the joint creative work and mutual understanding with his customer who was always open to experiment.
Text by: Roman Leonidov, Svetlana Fiantseva, Alla Pavlikova
Translated by Anton Mizonov 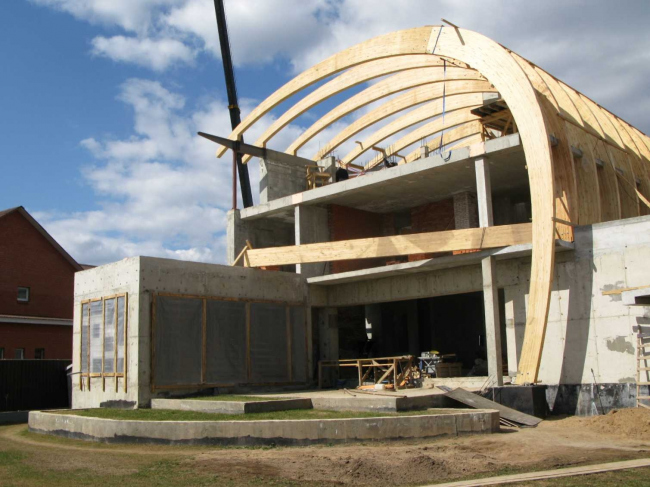 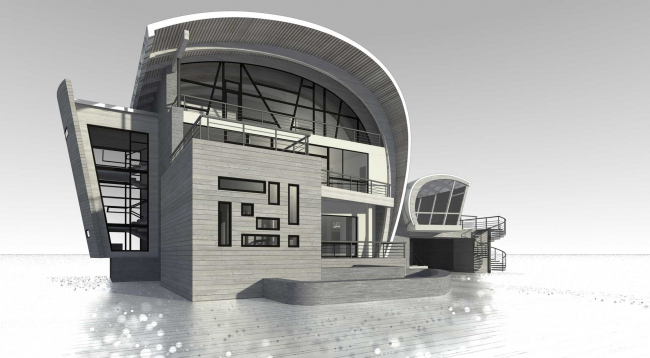