In the Nauchny Proezd, an office center has been remodeled upon the project by ADM achitects. 
We already covered this project in our previous issues: built back in the 1970's in the hideous and faceless soviet style, the Vitamins Research Institute, located in the Nauchny Proezd next to "Kaluzhskaya" metro station, was in a desperate need of remodeling. By the moment the remodeling started, the building already no longer functioned as a research center but was just renting out its office premises.

"And after the complex was completely "redressed" upon the ADM project, Moscow's southwest got, not far away from the Gasprom HQ, something that could be arguably called a unique “Smart Park” business quarter. 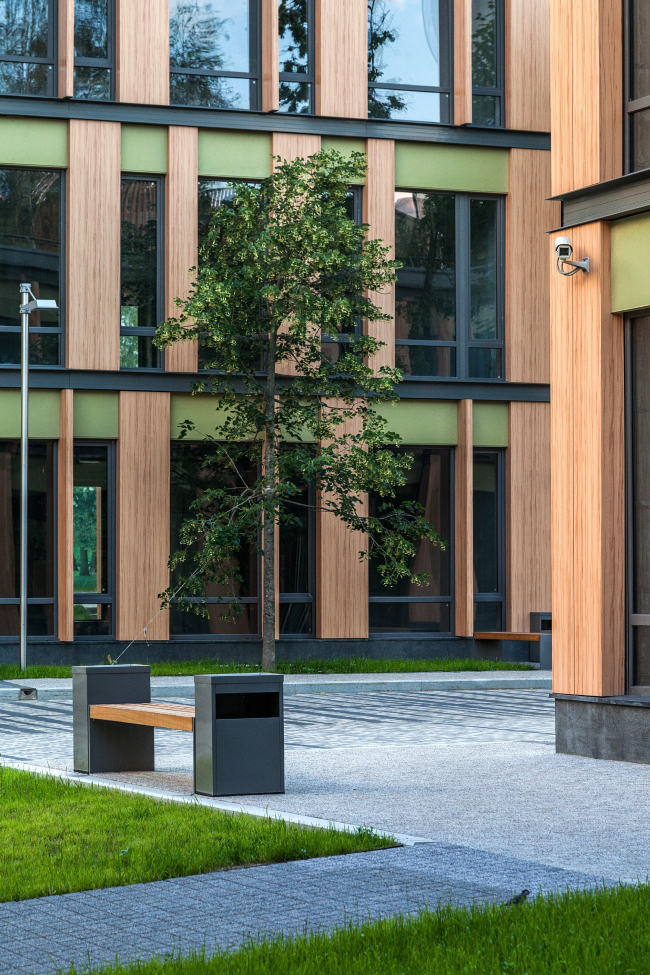 The starting point that the architects took for designing the Smart Park concept was its very environment. The business park occupies an area of two hectares and in the summertime it is so saturated with verdure that the visual border between the office buildings and the nature practically disappears. "What we did was boost this impression, making the unity of the buildings and the nature the trademark technique of our project, the golden thread that runs through it - Andrew Romanov shares - and we selected our materials in accordance with this idea: the wood-imitating alpolic, and the painted panels of fiber-cement".

From these, relatively unassuming, materials coupled with glass, the architects made new facades that helped transform the awkward proportions of the not-too-gracious late-soviet buildings into more elegant, multilayer, and dramatic ones. The composition of the facades, as the architect puts it, resembles the furniture doors: the "open shutters" effect is created by the panels that are placed perpendicular to the facade surface - as if they were some kind of little doors rotating on a pivot - even though they perform the function of firmly fastened lamellae that protect the windows from the slanted sunbeams and thus create an interesting play of light and shade on the facades. This theme is supported by the uneven breadth of the panels that stay within the facade surface: one could think that they are capable of sliding over the rails of the double L beams. In actuality, the shutters do not either slide or turn but they endow the facade with an intrigue without turning it into a mechanical toy (the latter, though, would have been impossible with the modest budget of the reconstruction). The metallic guiding rails are also placed not quite in the places that one might think at first sight they would be: it seems like the intermediate floor must be placed directly behind them but in actuality the floor is placed higher up - what from the outside is perceived as the top of the window in fact conceals the windowsill behind it. "To a large extent, this is a decorative technique that allows to create the dramatic facade - Andrew Romanov explains – thus, what we see is a case of successful camouflage, something that is seemingly the direct opposite of the modernist principle of "reflecting the truth of the construction" but still resonant with what Le Corbusier said about the independence of the hang-on facade. Since this facade is merely a screen, it is free to play by its own rules”.

The metallic guiding rails and the wooden "shutters" make the visual framework; deeper inside the surface of the facade, the inserts of the fiber cement panels fall together to make horizontal bands, forming above the windows some semblance of a lambrequin with curtains, or, "forehead", as the Russian people of the XVII century would have said (from the outside, the green inserts look nothing short of the "top" of the window, although in actuality they are the lower partition wall and the floor line is situated exactly in the bottom part of the green band, an interesting visual effect). The vertical partitions of the main entrance building turned out a bit thicker, the wooden panels alternating with the green inserts there. 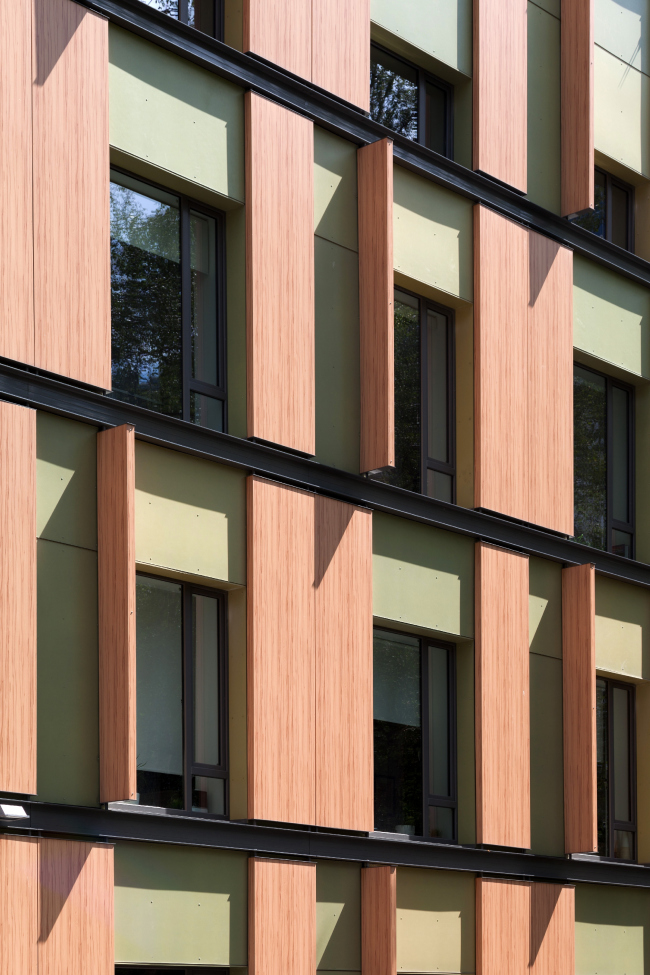 The facade grid that we just described is the main story of this reconstruction embellished by a few details: the "wooden" grilles in the top part of the buildings and on the walls of the substation in the courtyard, the pristine gray metal of the window frames matching the color of the L-beams, and the salad-green rectangles of the unit doors whose numbers are written in thin but very large numbers. The buildings in the yard of the main entrance building decrease their height in a gradual way - from five to three and even two floors - and consist of sections, each building being long but having a lot of hallway units in it with a stairwell in the middle of each one. Due to the fact that the breadth of these buildings is also considerable, the architects lighted up the stairways with a "light well": the exit to the roof is executed in the shape of a pavilion with walls made of glass, and because there are two or three floors here, this pavilion does a good job of letting a lot of daylight inside. On the roofs of the minor buildings, the architects are planning to organize terraces - the wooden paving and the aluminum railings are already there. The architects were able to arrange the had scraping and the backlighting in such a way that the complex really looks like one indivisible whole, like a well-drawn painting whose with every little detail of it thought out by its careful author. Thus, the architects neatly inscribe into the paving the lines of the parking marks and even the numbers of the parking stalls, the alpolic grilles on the buildings echo the real ones around the benches and the trash bins. 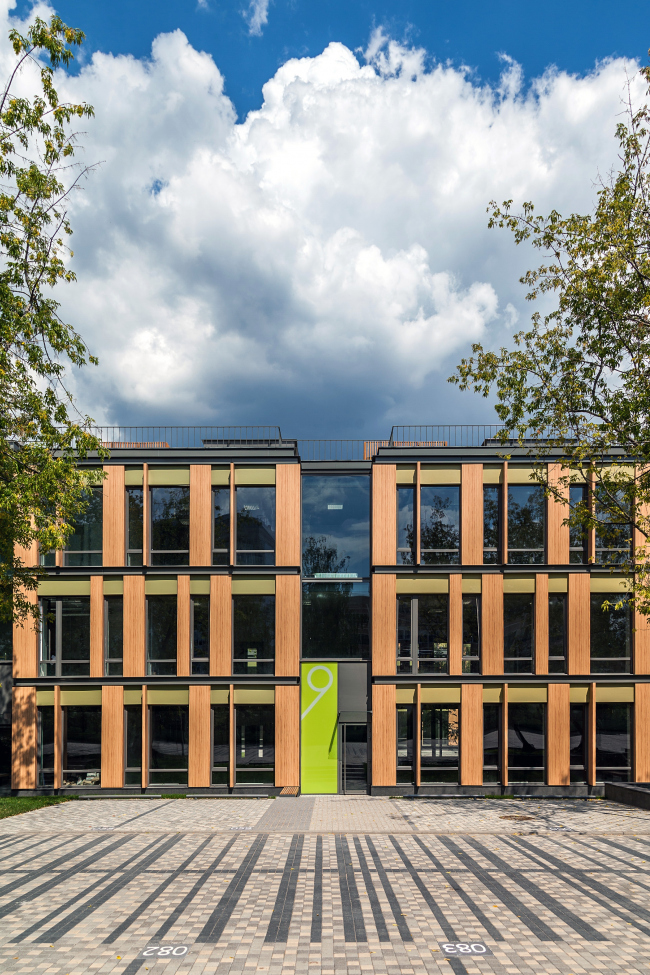 When ADM architects came here, this territory looked like a wasteland overgrown with trees - and the architects were able to keep them intact and even add new man-planted ones.

Today the trees do not look exactly like the garden type - but no longer "wild" anyway; upon entering the yard, one first sees the neat landscaping job that is probably the first thing here to catch the eye. The second impression must be the differences between the territories: the first yard is larger and it has more contrastive things about it - trees and shade on the one side, and pavement and more light on the other. The other yard is long, light and transparent in some "autumn" fashion. Both buildings that form this yard are low-rise, two and three floors high, but their very floors are taller and the grid's proportions here are vertical, they have more glass in them (it is here that one notices that the massiveness of the first building is but partly concealed by the decorative techniques). Together with the not-too-abundant trees and the striped rhythm of the pavement, the whole thing looks like a light autumn-transparent watercolor painting. The architects also landscaped the "adjacent territory": the small parking lot before the entrance and the tousle next to the driveway's bend; while formally unrelated to the territory is question, they are now organized in pretty much the same way: the cut grass, the curvilinear trails, the paving... this mini-park became something like the welcoming facade of the whole complex. 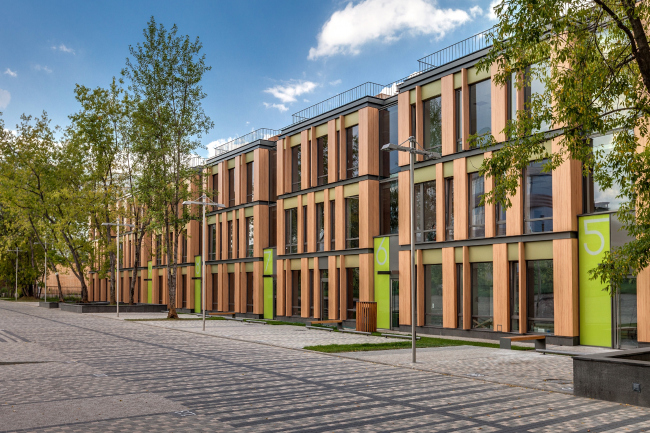 This is not the most important thing, though. Getting the overgrown land site (one that was also historically tied to the "vitamin" institute), the architects managed to make the buildings of the remodeled office center take on an "assimilative coloration" of the environment, and they were quite successful in it, too. The ever-shifting grid of green and ochre spots looks like a continuation of the thicket, only brought to a geometric order. This place might become the haunt of elfs, if there are modernists among them - the level of "resonant transparency" here, especially in the second yard, is quite a "non-Moscow".

In order to get a better understanding of what the architects really achieved here, one has to go outside to the Nauchny Proezd and take a good look around but, better still, drive down its loop as far as the Profsoyuznaya Street. Among the buildings of the soviet and post-soviet era, the former "vitamin" institute looks now like a glitter in the darkness. It even appears in a different way - it does not loom as a huge monster but looks as if it were woven from the leaves and dappled shadows, shooting up from the coppice. It looks as though it has a different "gene code", looks as if, being of the native population of this land, it has always been here and has finally manifested itself - somehow you do not even doubt that it is the real thing. A great way to fit in with the context, I think.
Text by: Ekaterina Kuznetsova, Andrey Romanov, Julia Tarabarina
Translated by Anton Mizonov 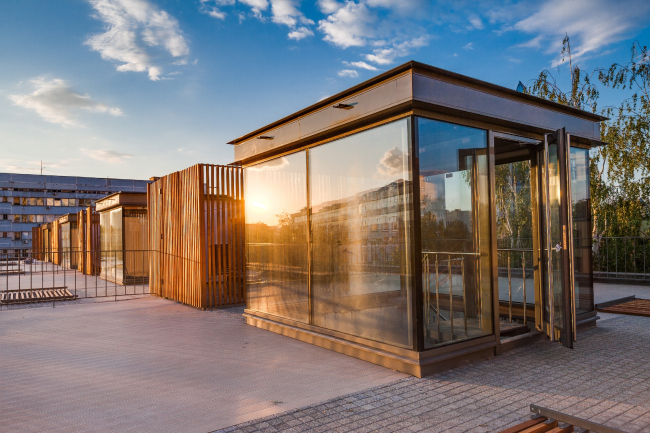