By Sergey Skuratov’s project, winner of the private contest, there will be built a new residential accommodation in Kiev, five towers lifted onto the high stylobate. Its architectural image combines European gloss and popular nowadays streamlined forms with allusions to the antiquity of the Kiev’s land, playing in front of the audience a delicate and good version of a geological cataclysm

The block, designed by Sergey Skuratov, is for the site, which can be described as a “highly promising”. It is not remote from the city’s centre, yet not so close. This is a typical industrial area on the bank of the two large ponds, stretched like the halves of a coffee bean, along the narrow neck of land that used to be a road. The ponds are too uncared and are overgrown with pond scum; on the bank, from the city centre side, from the east, there are industrial plants. The plant, closest to the water, has been moved out, the other one is on the agenda. The ponds will be cleaned; instead the industrial territory, by the water, there will be the block by Sergey Skuratov noticeable from afar.

The block is supposed to become noticeable, it will be a new city’s dominant. At the same time, the client wanted the buildings to be not high-rised, according to fireguard restrictions no higher than 73,5 meters, the maximum height a fire fighting vehicle’s ladder can reach. Sergey Skuratov found the following solution: he lifted the entire complex to the 20-meter stylobate. It includes car-parkings, shops, partly offices and it have not been earthed into the unreliable ground by the water. There will be true artificial soil laid on the roof of the stylobate, planted trees and made children playground – in short, there will be a park for the residents of the area. Also, if needed, fire-fighting vehicles can get to the stylobate by rampant. There will be the paths of large tiles with big gaps for grass – not to ruin the green decoration.

So, the stylobate solves not just one, but lots of issues: achieved desirable monumentalism – the total height of the complex from the ground to the top is 95 meters. The requirements of fireguards are considered – their vehicle getting to the yard on the roof of the stylobate deals with the houses no taller than 73,5 meters. It gets into the coastal height-difference (about 10 meters). Separated private yard space of the complex’s residents not by concrete or other huge fences, but just by lifting it over the ground. Must notice, the yard opens a nice view to the ponds and their surroundings, on the park seen in perspective.

Must say, Sergey Skuratov has been keenly developing the idea of levels of an urban landscape for the past two years, minimum. First, there was a house in Tessinsky pereulok, which looked as if it had been “excavated” like a monument of architecture and archeologists had worked over it. Than, there was project of the block by the Donskoy Monastery where the yards, lifted a few levels higher, were pierced by streets. Than, a house in Khilkovy pereulok earthed down with all the three its storeys. And today, there is the block in Kiev, one may imagine a group of houses wit the single “spot” of underground storeys. Only as a whole, together with the lower part, seen outside.

If consider the image part of the topic, the idea of a “geological cataclysm”, in the result of which the entire block is over the city, has been fully played. The exterior walls of the stylobate will imitate the “texture of gofrokartona”, cut cross. This means the most of the walls – glassed surfaces. There are thin brick (or stone) stripes-edges, extending from the smooth and gloss “mass”, they are the horizontals of divisions of storeys and verticals, that replaced window pillars and are equally arranged in chess-board fashion. Again the author says they are like “honeycombs” as if they were cut out of the ground with a sharp knife and then they were pulled – honeycombs are treated such way.

Pulled out with everything that is over them – the five 20storey towers with apartments. The towers stand in chess-board manner – not to fence each other from the pond. The facades will be decorated in Sergey Skuratov’s favorite manner – terra-cote tiles, gradually changing the tint from the dark in the bottom to light at top. The architect used the method in the house on Mosfilmovsky and in Tessinsky pereulok.

By the height and the volume houses are equal, but are quite different in their shape. The shape is “plastic”, sculptural - the towers are a little wider towards the bottom, nearly by the column’s entasis and narrow at the top. They can be compared to overgrown great-columns, with the faraway Stonehenge, or the “local” Polovets women. It is closer to the stylish Celtic Stonehenge, though geographically distant. It is like the architect summarizes contextual connotations of their company, softly hinting at the age of the place. One of the towers is “on the sidewall and cut in half” – it is most remote from the water and accommodates the office centre. The “laying tower” maintains the idea of megalith – the Stonehenge also has fallen stones, even the outline is quite alike.

Yet, the towers are not totally like the “standing stones” of megaliths. And that is not because of size and great generalization, though there is such. The reason is that besides the ancient and stone connotations, there are modern bionic – the towers are like some nature formations, some nest of wasps, molding on the combs of bee worms or cocoons, from which something is trying to get out. The volumes are placed at different angles and seem to turn a bit, bend achieving effect of movement – frozen or awaking. Windows on the towers gather into irregular “deep pools” and with walls – stone-brick bark falls from awaken giants. This hidden movement can be understood differently. If the block has been moved out of the ground, we deal with geological cataclysm. There has grown a Stonehenge in the middle of Kiev and slowly is coming to life, not loosing its monumentality. Or ancient stone women are trying to get free from the shells of their cocoons. 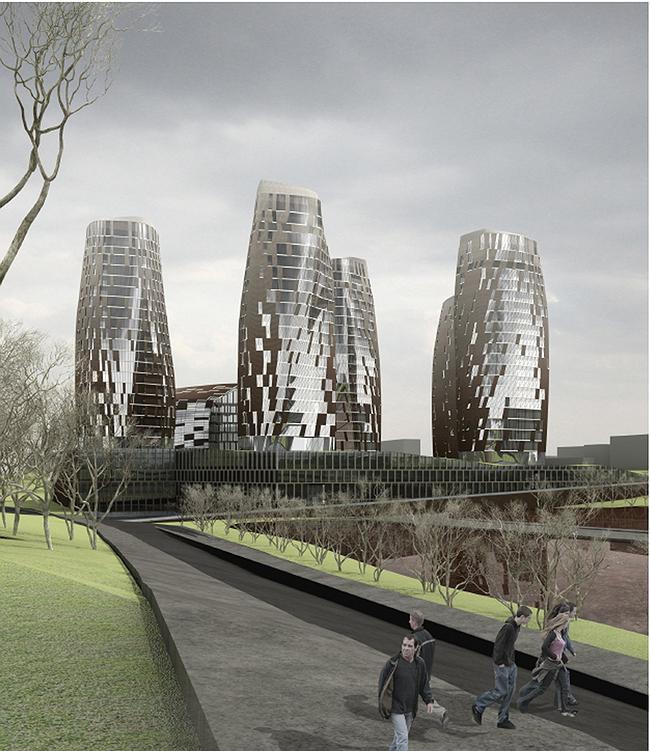 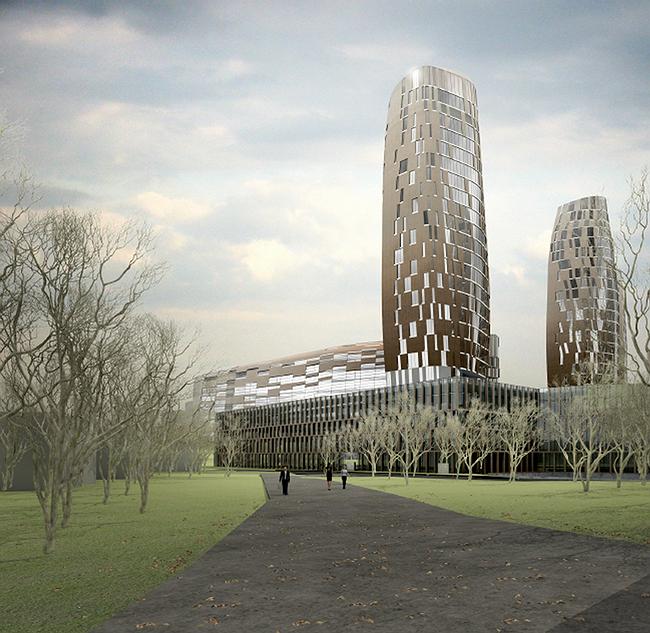 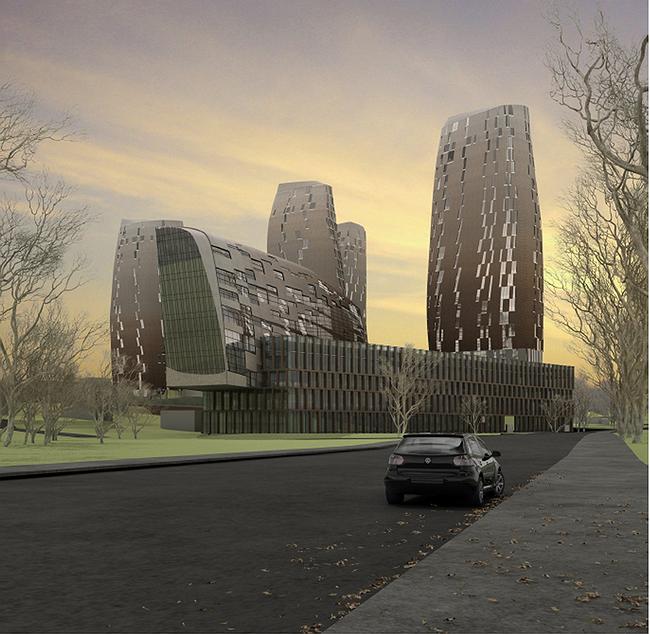 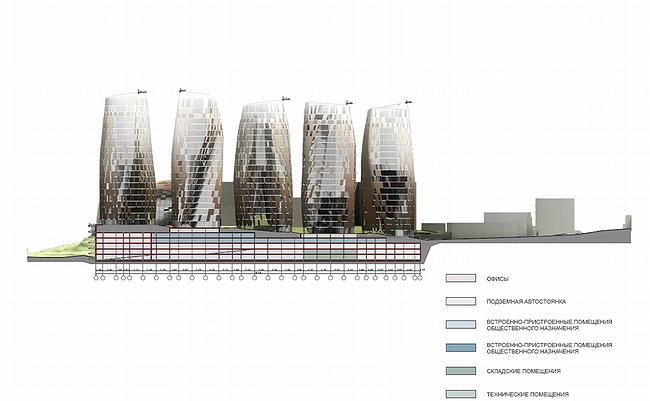 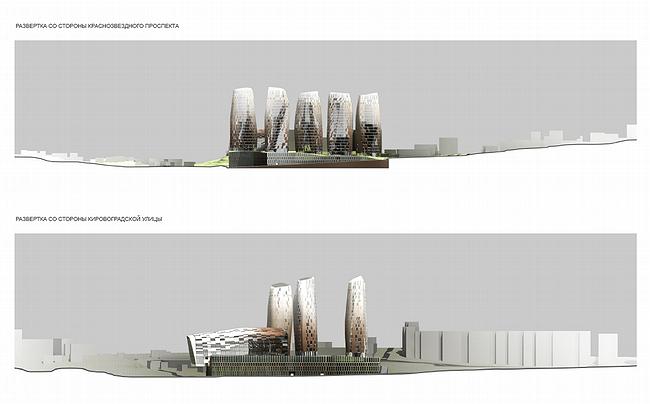 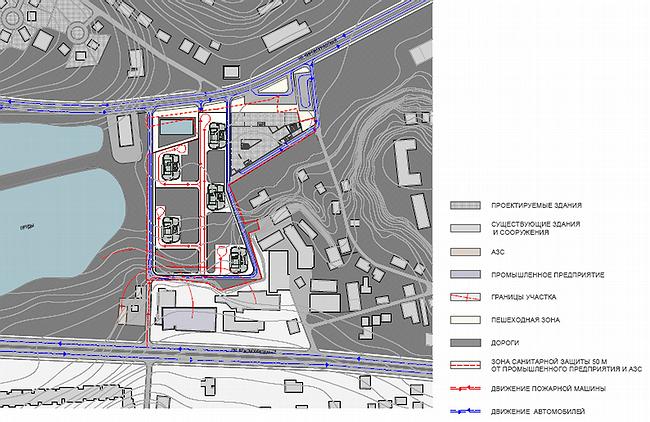 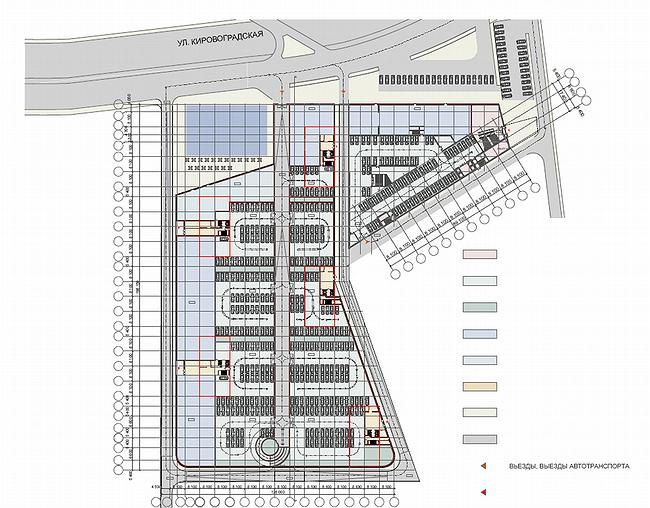 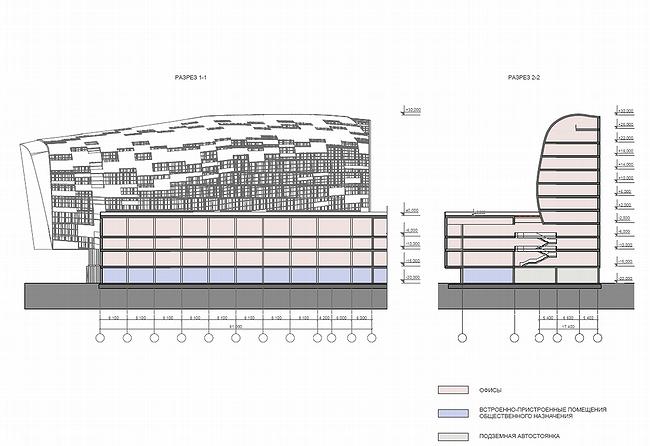 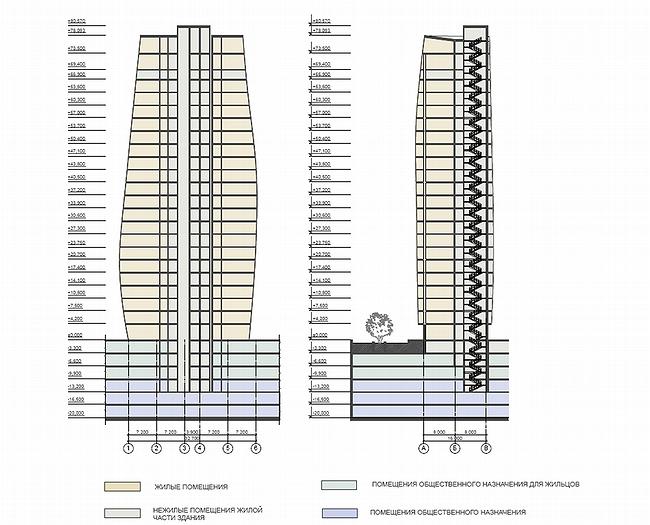