The Outposts of City Comfort

Taking part in the competition for the development concept of the former industrial park at the Berezhkovskaya Embankment, "Asadov Architectural Bureau" came up with the solution that was turning this area into an integral part of the city.

The contest for the 26-hectare industrial park in the capital's district of Dorogomilovo, was already covered by Archi.ru. It stretches from the Kievsky railway station to the Third Transport Ring, occupying the entire area between the railway and the Berezhkovskaya Embankment. Today it is an unpresentable-looking area with various buildings chaotically strewn upon it, mostly storage and warehouses, but the owner of this land - LIRAL Company - is intending to make a positive difference here. The integrated renovation of the land site became the main theme of the contest, within the framework of which "Asadov Architectural Bureau" developed a concept entitled "Berezhki... A City for Living".

In order to turn the former industrial park into a residential cluster, the architects had to address quite a few issues. The most important of them was the factor of transport accessibility (or, rather, inaccessibility) and a plague of restrictions issuing from its immediate neighbors. The railway sanitary protection zones, the Third Transport Ring, the Steam Power Plant, and the storage of diesel fuel were "eating away" almost half of the usable space. However, surrendering the priceless land without a fight was, of course, no option for the architects: it would have led to the project profitability wearing down to nil, and the hypothetical residential area would have found itself inside the alienation ring. The Asadov Bureau project, on the other hand, was all about using the land to its full potential thanks to the gradual strategy of turning the existing restrictions into the benefits for the future residential environment.

First of all, the authors reconsidered the close vicinity of the area with the railroad tracks. To be fair, one should say that here the Asadov team did not invent anything groundbreaking - on the contrary, the architects happily fell back on one of their favorite ideas that they had more than once "used" on . We are speaking about creation of "inhabited platforms" built over the railroad tracks, which, on the one hand, will help minimize the noise of the passing trains, and, on the other hand, will help to use the railway area and its sanitary protection zone to their full potential. What is interesting is the fact that in this project "Asadov Architectural Bureau" proposed to cover not only the railway fragment that runs along the northern border of the site but also the railway that runs between the improved industrial park and the Kievsky railway station. Totally, according to the authors' estimates, the thus vacated area could house the business, expo, and other premises with an area of up to one million square meters.

Of course, this solution might seem a bit too long-term and a bit too far-fetched, but the architects do have a point here: only such kind of a "bridge" is capable of really making a difference in the isolated situation of the industrial park that today is virtually cut off from the city. Besides the gigantic (and, of course, extremely expensive) "casing" that is meant to cover the railroad, the architects propose to build a few bridges - one being the automobile bridge that will provide a direct link between "Berezhki" and the Moscow City, and three pedestrian ones that will, in turn, make the district accessible to the public practically from every side: from the metro station, from the opposite bank of the Moskva River, from the Mosfilmovskaya Street, and from the park of the Setun riverbed.

Being one of 's main thoroughfares, the Third Transport Ring cannot, of course, be "covered up" so easily, so the architects had to look for other ways of dealing with its noisy proximity. Along the entire border of the land site that is turned to the Third Transport Ring, there grows a "linear super-house", as the Asadovs themselves call it, which performs the function of a noise-protective screen and at the same time the function of the "visiting card" of the future neighborhood. The number of its floors gradually decreases as one approaches the embankment, while the smooth curve following the bend of the road, is strengthened by the architects with the help of large cells of window openings that give the facade a sophisticated multidimensional pattern.

The necessity to protect the residential area from the adjacent power plant generated, in turn, a highly developed community center in the eastern part of the site, meant to become a city-scale centerpiece. It got the shape of a horseshoe that is turned in the direction of a new neighborhood and that forms a comfortable inner space. In their contest project, the Asadovs propose to cover it with a lightweight tent structure - the visualizations display an elegant semi-transparent sphere suspended at the roof level by thin steel-wire ropes. The association with Berlin's Sony Center immediately comes to mind, although, the authors do admit that that building was indeed one of the prototypes - in the contest of pre-concepts for the development of the site, when architectural proposals are not yet considered, this is quite appropriate. The community center will include an exhibition center, a concert hall, a hybrid library, as well as a center of alternative energy forms where innovative technologies of generating energy will be researched - the successors of traditional power plants.

The landscaped and building-carrying platforms over the railroad, the "wall" building and the buffer of the community center are the "outposts" that the architects use to make the existing sanitary zones if not step back, at least loosen their "grip" a bit. "Putting them from all the "adverse" sides, we came up with a space that is unique in the comfort that it provides and where we placed the main residential and public areas" - Andrew Asadov explains. And, while in the case of the analogue of the , the public spaces generally appeared in the first floors and on the almost exclusively weather-secure spots, here the authors feel absolutely free in designing the landscaped recreational areas that make the new district really comfortable and attractive. The residential housing is split into two line of blocks, between which there is the promenade with a man-made lake of a triangular shape. The houses of the first line overlooking the will get all the benefits of the "house on the embankment", while the decent views from the inner blocks will be provided by the man-made lake with landscaped multilevel embankments. The stylobates are used to raise above the ground all the yard spaces as well - according to the authors of the project, this will not only provide for an adequate number of parking stalls with but one underground level of the parking garage but also will help to draw a clear line between the private and public spaces. 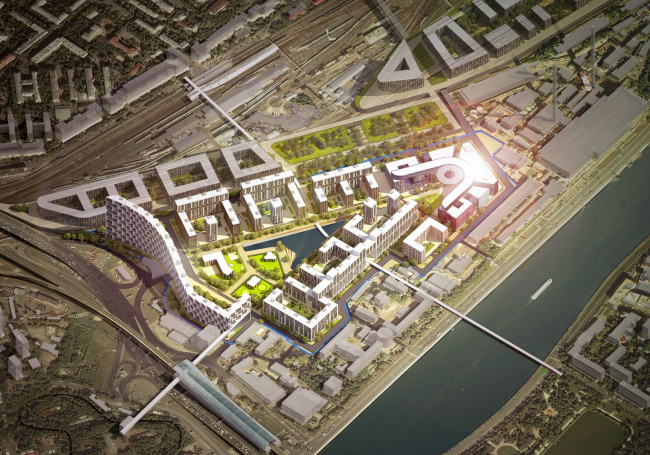 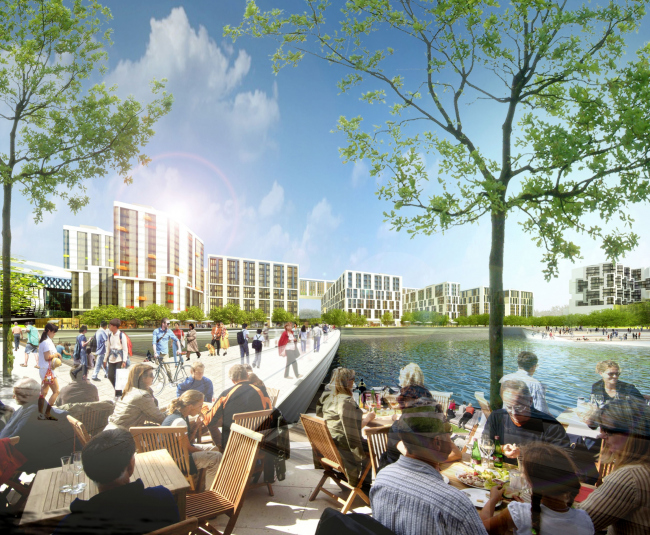 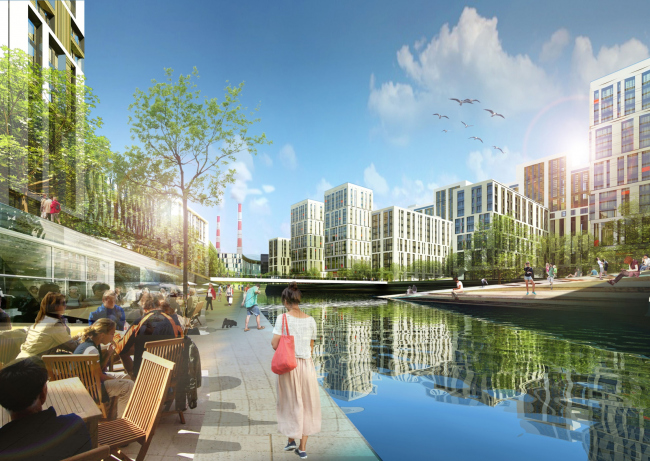 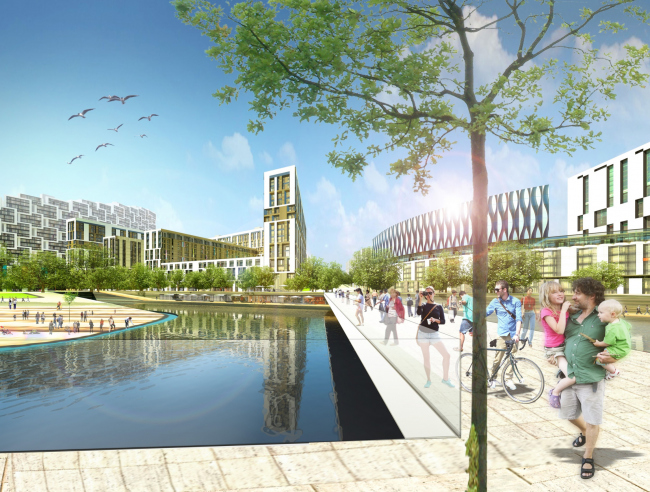 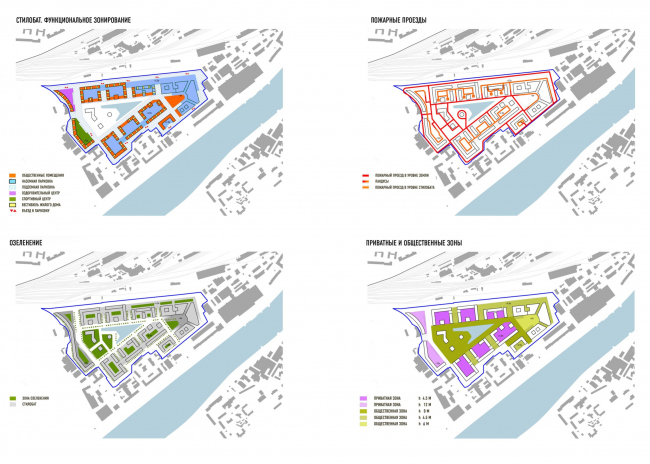