A Hut in a Pine Forest

This laconic volume hidden amidst the pine trees is the smallest-area one of all the houses ever built by Roman Leonidov.

This forested site is located fairly far away from and from the civilization in general, the place is enveloped by silence, and when he was discussing with Roman Leonidov the design of this country house, the commissioner wanted it to be flesh and blood of its natural surroundings. This is why the commissioner saw its design as terminally functional, simple, and unpretentious - in this nutshell he put his specifications at the first meeting with the future author of the project. As Roman Leonidov shares, he came up with several design options of the house, out of which the customer chose the most austere one, devoid of any expressive or plastic elements. "At first it seemed to me that this person was making a mistake declining the expressive solutions but the more time I spent on that site myself, among the century-old pine trees, the more I was inclined to agree with my client" - the architect reminisces.

The self-sufficient verticals of the pine trees are balanced off by Roman Leonidov with a composition that is horizontally oriented. And, while the garage is treated as a separate "cube", the residential part gets a more sophisticated geometry. Into the main two-storey volume, coated, just like the garage, with larch board, the architect cuts in a concrete parallelepiped at the level of the first floor. Its brutalism (especially as opposed to the wood) is offset by a large number of windows, both panoramic ones and narrow slits, coupled with snow-white stucco. In this "insert" the architect places the dining-and-living room, and its roof is used to support the terrace of the second floor. In order to provide for all the premises of the upper level to get open-air recreation places of their own, Roman Leonidov maximally extends the slab of the intermediate floor, and in order to separate the "children" and "adult" terraces, introduces an additional vertical wall. The final "architectonic" chord is shifting the horizontal slab in such a way that with its free edge it covers the roof of the garage, while on the facade on the other side it gets an expressive cantilever. At a casual glance at the house it seems that this shift was left still unfixed - "barging in" onto the territory of the garage, the snow-white slab almost hovers over it, even though this impression is actually deceptive: between the base of the terrace and the roof of the technical volume the architect runs thin supporting pillars.

This shift not only makes the overall composition more dynamic but also plays an important functional part, helping to create a covered passageway between the main house and the garage. Thanks to such a solution, the house that is small as it is (300 sqm together with the garage), looks still more fractured, "stretched" over the site, and hence even more gracefully fitting in with the landscape: the trees and the bushes not only get reflected in its numerous windows, they look as if they are breaking into it. By the way, it is this roof-covered passage that the entrance into the house is made in. As Roman Leonidov explains, by this he was able to kill two birds with one stone: he clearly articulated the entrance area on the main facade of the house and at the same time avoided any possible pretentiousness in its design. In fact, this passage that connects the front and the back yards of the house serves as its front entrance whose simplicity and naturalness are meant to be enhanced by the wood coating. The same kind of board is used to coat all the terraces of the first floor, and, while the terraces of the second floor get the railings in accordance with the safety regulations, the first floor ones are devoid of them completely - they are separated from the plot with but two or three stairs that are enveloped in verdure in the summertime. As was already mentioned, the main facade material here is the larch board that now is glistening with the honey hue of freshly-sawn timber. With time, however, it will change its color into silver gray and will in fact melt in with the trunks of the pine trees that surround the house. Apart from glass and concrete that have also become fully-fledged components of the architectural image of this project, Roman Leonidov used here bricks as well - a wall of this very material completes the back facade of the cottage, as if offsetting the expressiveness of the white block of the living room.

An important part in the image of the house is also played by the window shutters, made of thin laths of stained oak. The thing is that one of the mandatory conditions put by the commissioner was the availability of the opportunity to completely shut all the windows. Fulfilling this condition with the traditional kind of shutters proved challenging, and this is why the architect chose to use their up-to-date automatic analogues. Their chocolate-colored surface perfectly matches both the wooden coating of the house and the wine-red color of its bricks, while the horizontal orientation of the laths is supported by thin steel rods that are also used as a railing of the upper terraces. When the windows are open the blinds are perceived as a decorative element of the facade deign - but in the "shuttered" state they create an extra ethereal shell that securely protects the house from the sun and from prying eyes without making an impression of blind armor which perfectly matches the democratic character of this building as a whole. 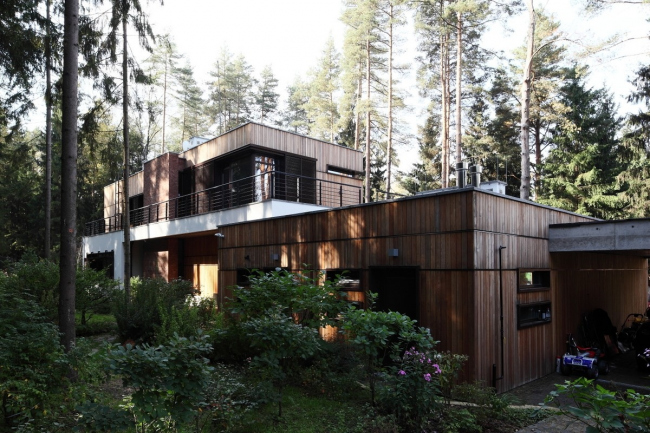 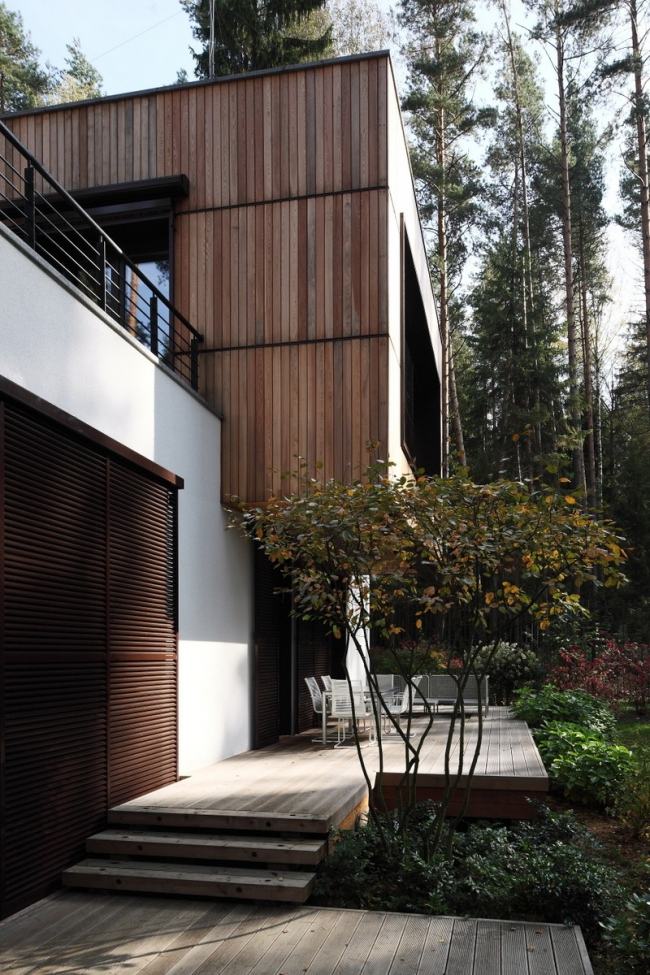 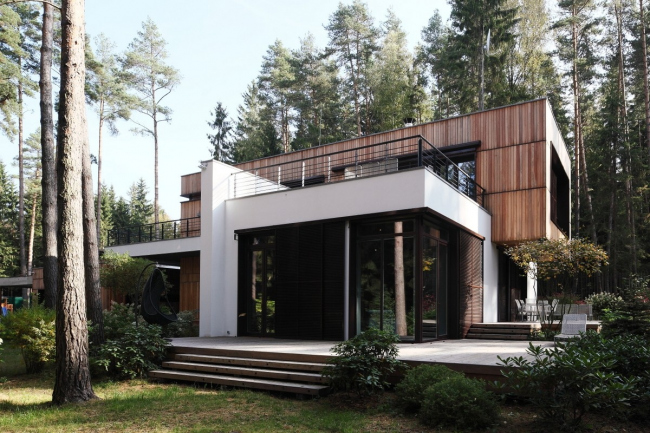 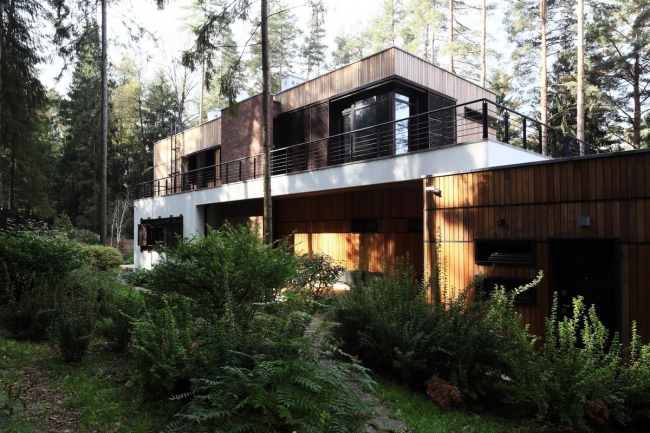 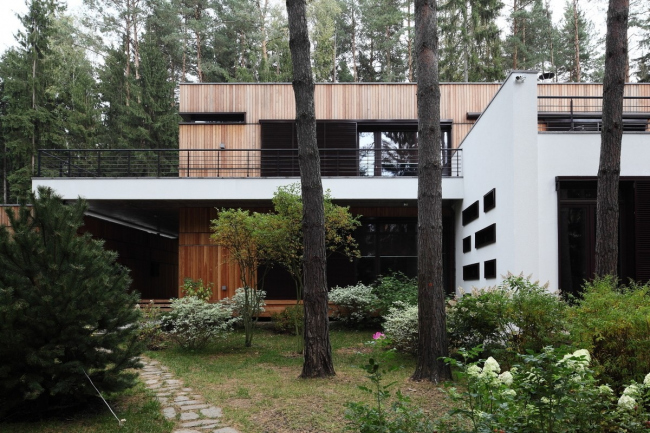 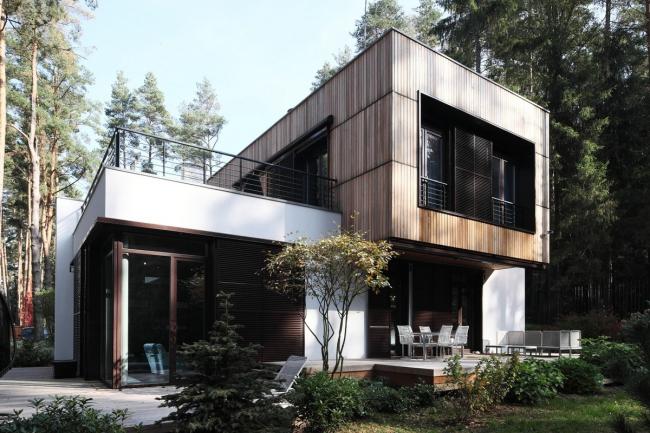 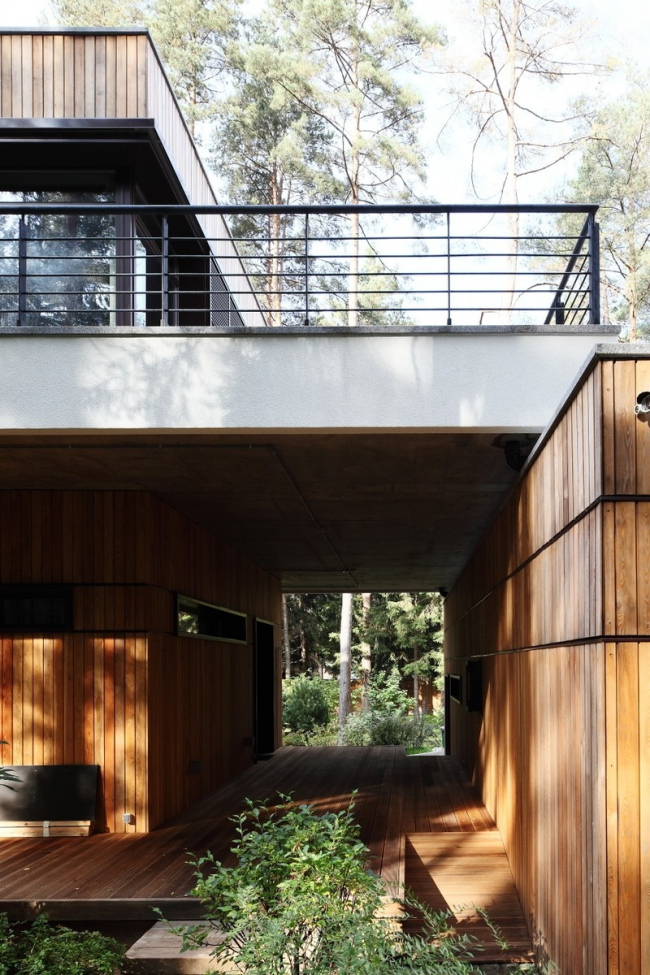 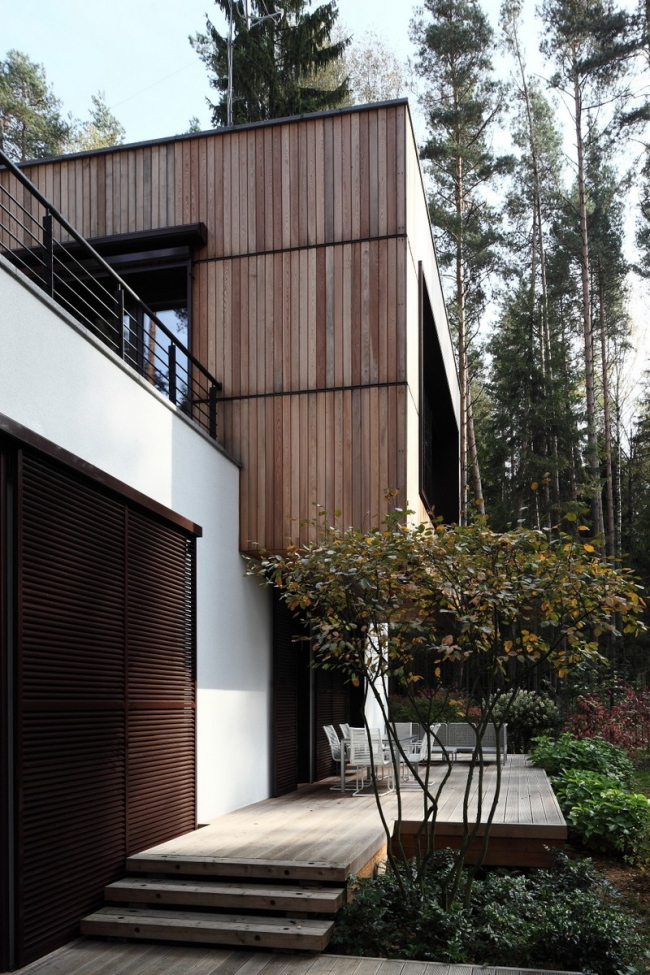 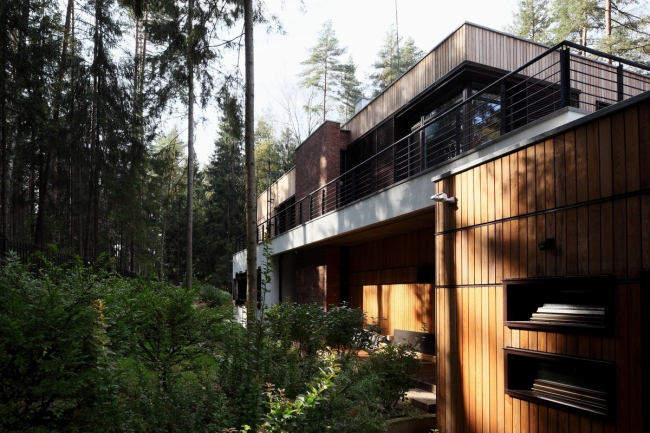