In Rhythm with City, in Balance with Nature

The business center designed by Andrew Romanov and Ekaterina Kuznetsova continues the "green" line of ADM Bureau projects that implement the ideas of interaction and mutual respect between architecture and nature.

The construction site is located in the western part of region, not far from Sheremetevo 2 international airport, in the woodland that is so far situated far away from any houses or infrastructure but, thanks to its vicinity to the federal highway, is sure to start developing pretty soon. Last year, there was a tender for the concept of its housing development. Among other competitors, on the list dominated by foreugn companies, there was ADM Bureau that ultimately came out as a winner.

The commissioner gave the architects a challenging but at the same time interesting urban ask - to create literally from scratch and on a vacant plot of land a grand-scale and fully functioning business center with up-to-date European-standard offices, meant supposedly for international companies, a hotel, and a spacious parking garage. All of this was to be positioned at a land site of a rather sophisticated configuration, whose layout vaguely resembles a giraffe or maybe a dinosaur with its neck pointed northeast. The long and narrow "neck", due to its peculiar dimensions, was the most challenging part of the territory because any building that would have been built here would have looked cut off from the other buildings.

This is why ADM architects proposed to divide the construction site into two areas. In one of them they concentrated all the significant objects of the complex; in the other, they placed a multi-level parking garage. Considering the requirement to keep intact as many trees that were there on the construction site as possible, it was decided that the parking garage will be of the above-ground type. As a result the six-level garage safely occupied the "problem" part of the territory, providing the number of parking stalls necessary for the business center of such magnitude.

As far as the main southwest area is concerned, Andrew Romanov and Ekaterina Kuznetsova proposed, instead of a standard business center, a concept of a small but cozy and self-sufficient town, carefully and harmoniously inscribed into the woodland. The utter absence of civilization around it made it necessary to create a developed space inside of it. And this is how the idea of a wide pedestrian boulevard suggested itself. It starts off from the public transportation stop, directly behind which the reception area is situated - it is a transparent, wall-to-ceiling glass oval-shaped building (this technique, the entrance area with transparent walls, and hence friendly, the architects mastered a few years ago, while designing a building in the Nastavnichesky Alley). Getting through the reception, the visitor finds himself under a tall and picturesquely winding awning that covers the entire space of the boulevard from beginning to end.

Glass reception. View of the complex from the road.

The paved road, very much like a river, flowing gracefully amidst the slender pine trees, covers the office tower sites in intricate waves, reaches out like a river branch to the parking garage, touches, like a wave with the edge of its crest, the square site of the hotel, and finally just as gracefully and smoothly returns to its starting point, completing the circle. Inside the circle, a plot of pine forest is left intact.

The topside of the awning above the promenade is covered with grass, and at some places rocks are strewn around, the legacy of the Zen garden. Thus the offices above will command a view of the wide green strip of land, pierced with the trunks of pine trees - nothing short of the dream of a science fiction romantic - a green, multi-level city. Meanwhile, there is a world going on under the "green blanket". Here and there the boulevard is livened up by street cafes, small shops, recreation places - in a word, this IS a real city street, a place where people meet and communicate. The promenade serve not only the practical communication purpose but also, green and improved, filled with public spaces, street furniture and lamps, forms the human scale of the perception of this complex. The streets unites and connects all the buildings making them live and work in a single rhythm - in the rhythm of the city. And, nevertheless, inspire of the bustling activity on the boulevard, and even in spite of the fact that now and then VIP's cars will drive through it, it look a lot more like a park or a forest - natural, picturesque, with plenty of trees. The architects preserve the trees that grow in the middle of the carriage way, carefully "leading" their trunks up through the round openings in the green awning. The pillars that support the roof at different angles, in turn, echo the tree trunks as if insisting on them being a part of the surrounding pine forest too.

Street under the wavy awning

The centerpiece of the complex actually consists of seven glass towers of a rectangular layout that lets to make the most of the land site. Their rooftops are strikingly "cut off" in a diagonal line, the tallest tower being high. On the facades the glass asymmetrically alternates with the rectangles of the wooden panels: this makes the towers look a little more diverse and at the same time "warmer". Six high-rises are occupied by offices and are placed in pairs opposite to one another along the ring of the . The seventh, placed at some distance, in the northeast protrusion of the site and facing the highway, is meant to be an international-class hotel.

The wall-to-ceiling windows on the facades will let the office workers enjoy the scenery. This, however, was not enough for the authors of the project. According to Andrew Romanov, they wanted to literally integrate the glass high-rises into the forest, in spite of the fact that they tower incomparably higher that the tallest trees. Trying to enhance the participation effect, the architects supplied the austere volumes of the towers with cantilevers that overhang above the trees from the side of the promenade. The cantilevers are occupied by meeting rooms with wall-to-ceiling windows. It will sure take one's breath away to be inside such a space because of the feeling of flight: the meeting room literally hovers above the forest. Its interior will be, on the one hand, open to the natural surroundings and to the sky; on the other hand, one can clearly feel the theme of overcoming the nature, and, above all, the power of gravity; it is a mixed motif of admiring the landscape and the technical power of man that has risen above the treetops in his "space capsule".

Thus the architects of ADM grow a forest of skyscrapers amidst the pine trees. Particularly impressive is the combination of unabashed "office" technical architecture of the glass towers with their cantilevers suspended in space, and the architects' attention to detail, to the grass and the trees, and to the quality of the public space, open to people and nature, high-tech and naturally calm at the same time. ADM architects have been exploring these themes for the past few years: right now the bureau is finishing the construction of a few office complexes, each of which combines lightweight up-to-date architecture, careful treatment of each and every tree or bush that happens to be there on the construction site, and - and this is particularly important - quite unusual, by Moscow standards, quality of designing the improvement items (street furniture, footbridges, street lights, and various types of grass), in other words, a serious and professional approach to organizing the environment of the business parks being created. Fed with the nourishment of a large-scale countryside project, these positive qualities grew to the fullest. No wonder this project won an international contest. 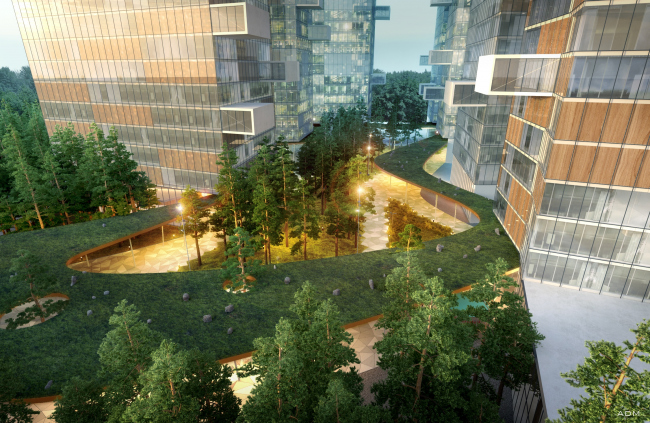 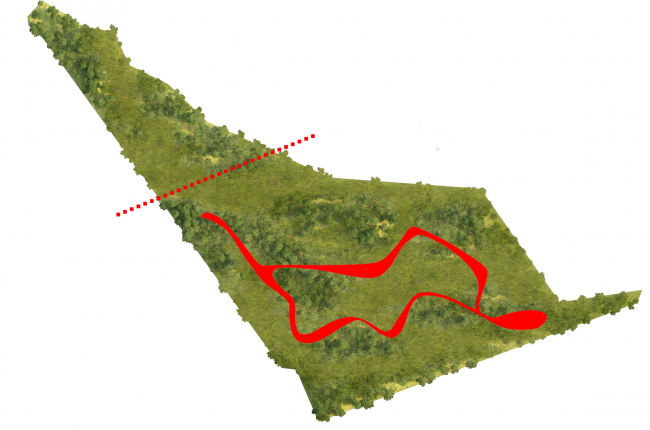 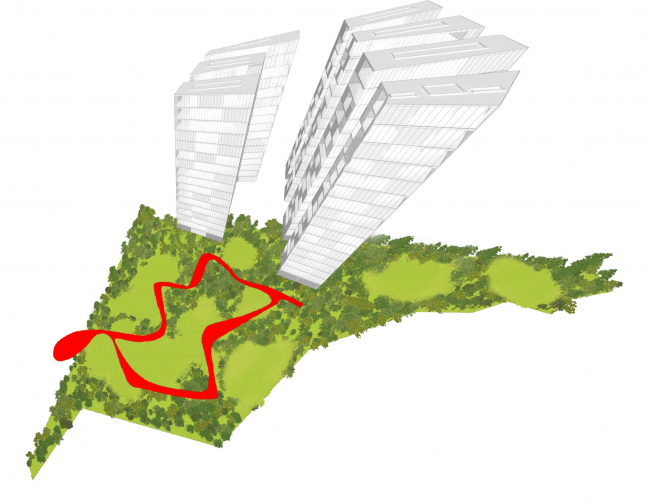 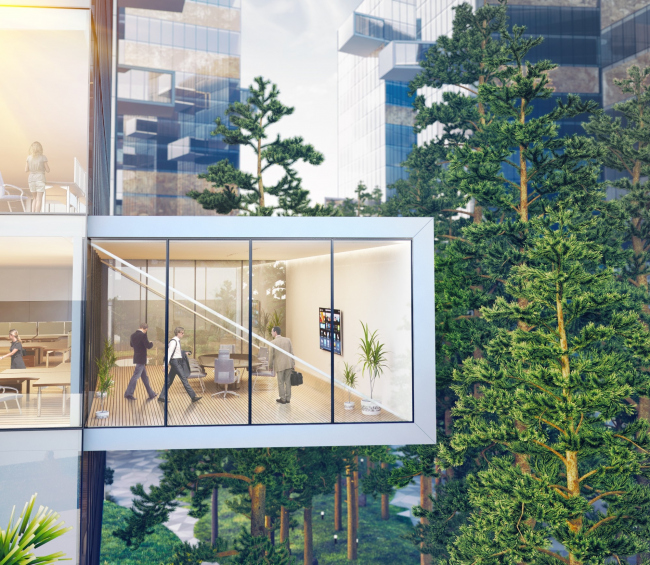