Moscow area is seeing the construction of a new country house built by the project of Roman Leonidov architectural studio; the project is based on the principle of being at one with the universe.

Roman Leonidov studio started working on this project back in mid 2011, and now the construction is entering its final stage. The house is being built in the east of region, at the otherwise vacant land site. Around the house, as far as the eye can reach, thick leafy forest and green meadows spread for miles and miles around. According to the specifications, the architects were to place a rather bulky volume on a square site with an area of in such a way that would leave extra space for the orchard and an open-air gym. And, because on the plan the house got a shape of an elongated rectangle, the authors inscribed it into the quadrant exactly along one of the latter's sides. Thanks to such a shift in relation to the central axis of the site, behind the house there appeared a vast area for sports and recreation where the orchard, the barbecue zone, and the playground border on squash courts, street ball grounds, and ping pong tables. In fact, the commissioner's passion for sports became the starting point in designing the house - it manifested itself in the activity of the architectural image, as well as in the rationality of the interior plan and in the logic of the yard territory.

It will be safe to say that from the first renders that one lays his eyes on, this house is immediately seen as being Leonidov style: the expressive multidirectional arcs of the roofs, the huge terraces, clear division into two wings connected by the central nucleus with the front access door. Thanks to the terraces, these "wings" noticeably step forward, as if flanking the central two-storey volume that Roman Leonidov almost completely covers with glass putting a pitched roof on top of it. The double columns, sheathed with wood, support the bare structural skeleton of the roof and the stone slab of the open-air terrace at the second floor level. Project of a residential house in Moscow area. General overview

The right-hand "wing" that houses all the indoor sports facilities - the gym, the swimming pool, and the sauna - "flies" forward as a dynamic glass volume whose flat roof serves as the large terrace, protected from the sun and the fall-out with a wave-shaped marquee. From the left side, the composition is offset by the austere awning that conditionally takes on the function of the left-hand "wing". Beneath it, there is the walking area that leads to the central entrance, while the awning is turned into yet another terrace, this time of an open-air type.

Generally, the abundance of terraces and open spaces in this project is quite amazing. In fact, they surround the house from all sides - practically from its every standpoint, be that the first or the second floor, one could get to one of the terraces to feel at one with the surrounding birch wood. And inside the house, thanks to the huge floor-to-ceiling windows, the feeling of being at one with the nature never for a minute leaves you, the confines of the house expanding to infinity. The architectural image of this country house is based on the crossing and interaction of simple geometric figures and planes. For example, the giant wall of natural stone breaks through the main volume, splitting it into two parts and towering over the roof. It is echoed by a less tall but more massive stone wall that also serves the function of the bearing structure of the right wing. These dramatically articulated details bring variety to the horizontal orientation of the terraces and awnings.

The house is divided into several parts not only visually but functionally as well. For example, the first floor is divided into a "sports" area and the public area, the latter housing the kitchen, the study, the recreation room, the wine room and bar, as well as the poolroom and the music room that also provides access to the back yard. The connecting link between the sports and the day-to-day activities is provided by a double-height drawing room, the main decoration of it being the stone portal of the fireplace and the floor-to-ceiling aquarium that separates the drawing room from the kitchen. The second floor and the drawing room are connected by a wide staircase leading to the inside balcony that, in turn, serves as the buffer between the master's and the guest bedrooms. Double-height drawing room with a fireplace and an aquarium

Peculiar is the fact that in decorating the interior the architects use the same materials that they use on the outside - wood, stone, and glass. The connection between the outside and inside images is enhanced by the wooden roof-supporting structure that is to be seen from inside the house. Feeling at one with the universe is also enhanced by the commissioners' deliberate refusal to use any modern electronic devices. The house does not even have a television in it, because, according to the owners, the fire in the fireplace and the forest outside the windows yield a lot more food for reflection and are far more eye pleasing. 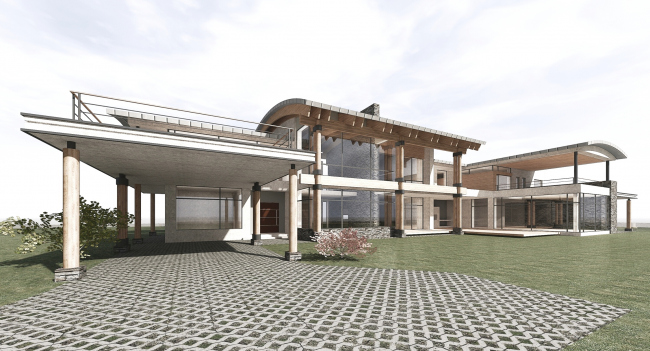 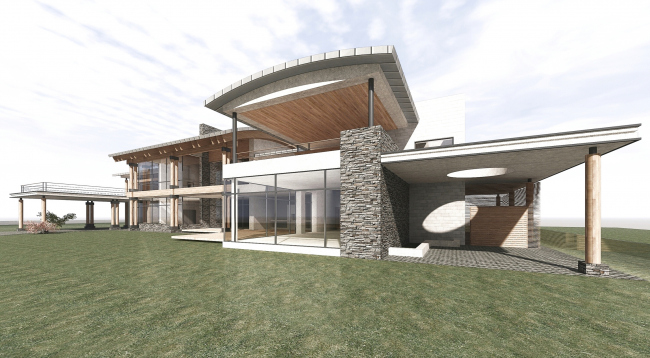 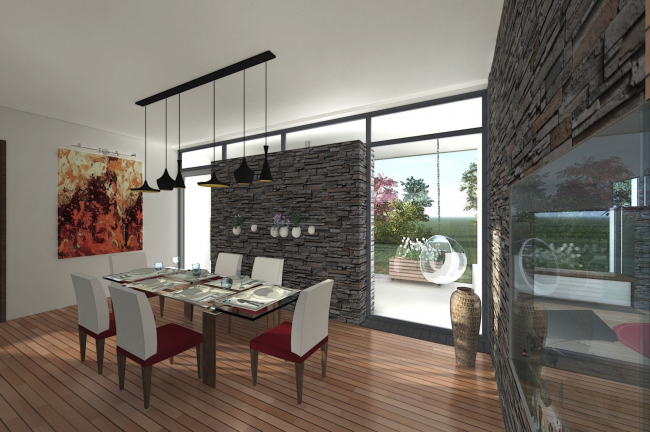 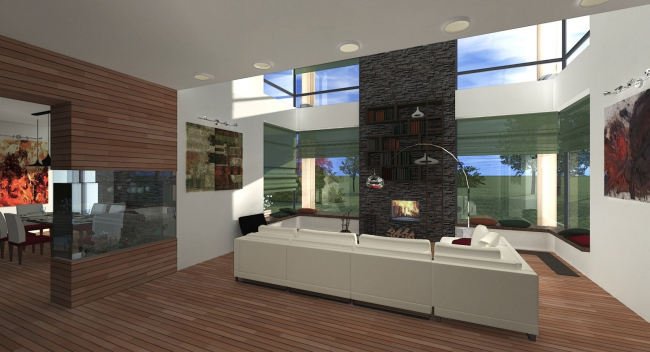 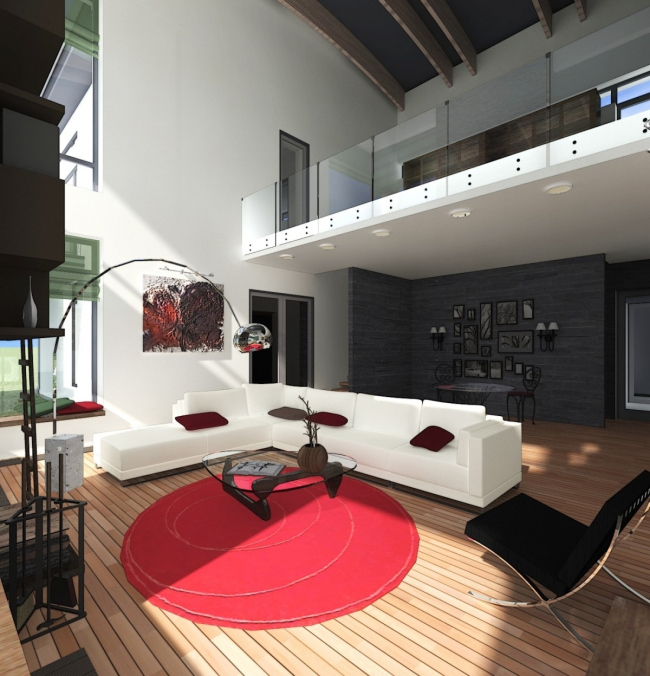 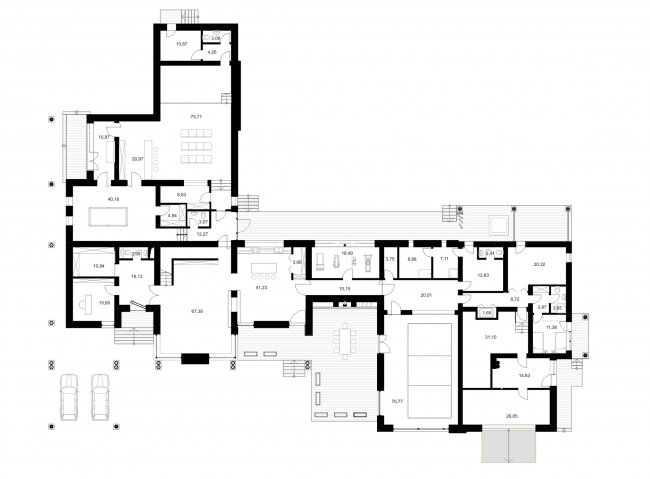 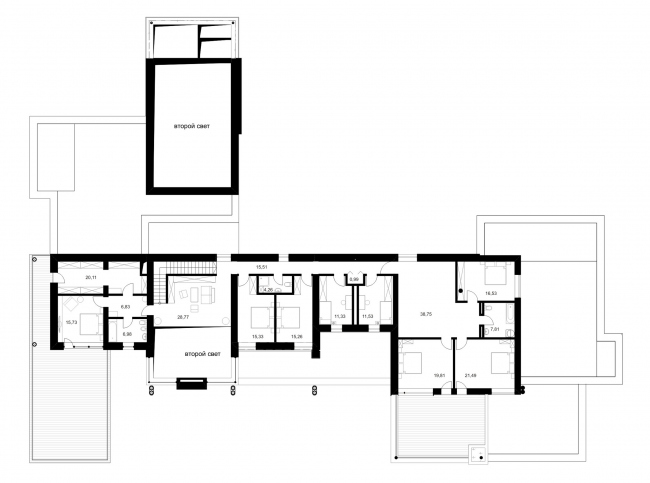