Two new projects by "Vissarionov Studio" developed for the cities of Archangel and Sochi... Different in climatic conditions, typology, and square footage, they have one thing in common: they create new public spaces.

In both cases the work started from the task of designing a purely utilitarian building - Archangel center of the city needed a new underground parking garage, and in a cafe was to be rebuilt - and the architects saw the opportunity to do more than just remodeling. In , Vissarionov Studio architects got the land site located in the very center of the city - on , not far from the building of the city hall and Lenin square. Its plan has the shape of a rather long and narrow rectangle stretched along the avenue between Voskresenskaya and Karl Liebknecht streets. On the northwest, the site borders on the territory of a high-rise administrative building - the characteristic modernist "candle" closes the perspective of this vista, and on the southeast side the site borders on the banking complex that needs a parking garage just as the city does. Presently, this rectangle serves as an open-air above-ground parking lot that is always closely packed with cars - the thing is that after the crossing with Karl Liebknecht Street, Chumbarov-Luchinsky avenue turns into a pedestrian-only area: a few years ago the municipality decided to bring to this place the wooden buildings of the old town and turn this area into a "street" museum. What they ultimately got was indeed a picturesque pedestrian area surrounded by houses of XVIII-XIX centuries but so far it still ends in nothing in fact - it just stops dead before the spontaneous parking lot. Thus the idea to extend it by hiding the parked cars underground, suggested itself, and Vissarionov Studio, upon getting Archangel's main architect's approval, treated the resulting vacant space as the intermediate stage between the "chamber" historical housing and the grand-scale high-rise. Besides the wooden mansions and the concrete vertical, in the vicinity of the construction site there is yet another building that is hard to overlook. This is a large multi-hallway condominium located on the other side of the avenue and almost as long as the rectangular construction site. The eight residential floors are raised on 1970's-style triangular pillars, behind which there are the retail and repair shops occupying the ground floor. Further on up, the only decoration of the stretched facade is the line of triangular bay windows. Thus, the land site that is to be turned into an improved public space neighbors with a roofed pedestrian gallery on the street level. The obvious choice would have been to build up the extension of the pedestrian street with little "vaudeville" mansions and limit oneself with the traditional improvement coming down to benches and street lights - but the architects of Vissarionov Studio reasoned that such a solution would be dissonant with the huge silicate-brick wall as if bristling with the triangular "thorns". This is why designing the volumes of sizes comparable to those of the historical housing the authors of the projects strived to find for them the shape that would simultaneously resonate with it and with the modernist legacy as well... Such a compromise was found in building a few compact low-rise houses (two floors max) with pitched roofs. On the one hand, the inclinations of the roofs make these volumes akin with their "grandfathers" in the extension of the street; on the other hand, the architects replace the traditional apex with a flat fragment, and extend the inclinations down to the ground, thanks to which the houses get the characteristic "technocratic" silhouette that is closer in spirit and geometry to the towering high-rise condo. The authors even go as far as to marry the new space with the already-existing pedestrian gallery by means of the color solution as well: one of the project options presupposes the massive rests painted in bright colors "overflowing" down the asphalt and onto the roofs. A less radical option proposes a monochrome, almost black-and-white solution for the cottages - at the first glance it does not look too garish but it still looks quite prominent against the background of the silicate bricks. The contemporary "origin" of the volumes will be also stressed by the fully glassed main facades turned to the pedestrian area under construction. And, because these houses perform the function of expo and retail pavilions, in the design offers the transparent facades are treated as showcases that in the nighttime will provide the city space with extra light and comfort.

The former parking lot is going to be planted with trees, and the former carriage way will be removed altogether, so the pedestrian area that used to occupy the modest space under the protruding ledge of the condominium now becomes the rightful and the only "owner" of the territory. The entrance to the three-level underground parking garage that was in fact the starting point of this project is located on the opposite side - between the complex and the bank territory, and it is designed to be as inconspicuous as possible. In , as was already said, the starting point of the project was the task of remodeling the already existing cafe. It is located on the embankment of the , directly behind the beach stripe, surrounded by a green square. This land site also has a rectangular shape, stretched from west to east at an angle to the shoreline. Now the cafe is a small building with a terrace on the second floor - it is incapable of handling the visitor flow even in the low season, and the owners made a decision about expanding it. At the same time, the only area that allows expanding is the cafe's green yard, so the architects were confronted with a difficult choice - new construction or preserving the green planting. The designers were able to find a compromise even here, though: as the main building material they chose various sun-screening structures - tents, awnings, and even Venetian blinds. "We ourselves define the typology of this comparatively small but functionally saturated object as "café-shop with gazebo pavilions" - the authors explain. Reconstructing the existing building of the cafe (the architects are replacing its top floor and cover it with a compound roof, as if borrowed from the masters of origami), the authors add to it a whole number of light glass pavilions, filling in the spaces between them with plants, benches, and dining tables. The new structures are laconic cubes whose walls are made of Venetian blinds, so, depending on the position of the lamellae they can become anything from dead-blind to see-through. They are connected to the main building with a band of awnings. And in order to keep these volumes from looking like the train cars, the architects give different geometry to the tents - they continue the theme of the roof of the reconstructed building, others are designed as marquees. Together they form a chamber but at the same time sophisticated space resonating with the vibes of the seaside resort city. 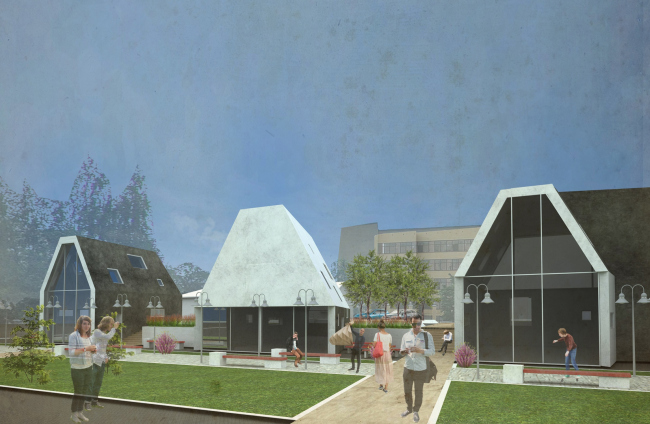 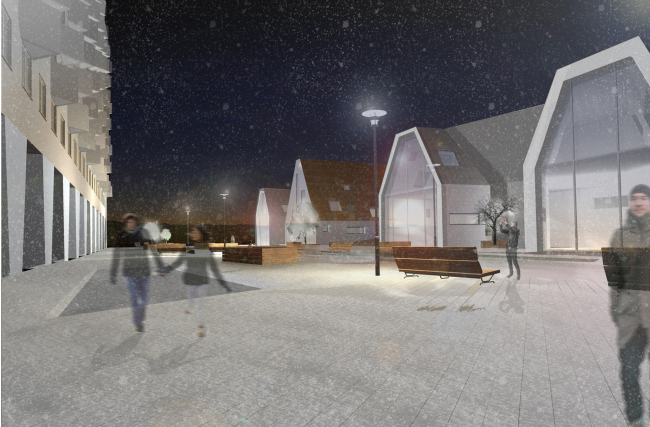 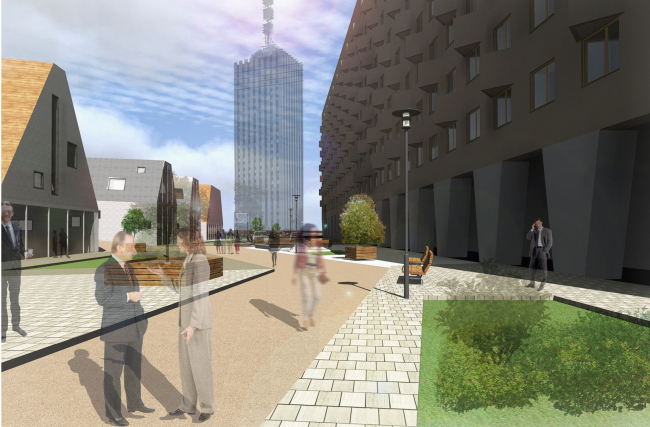 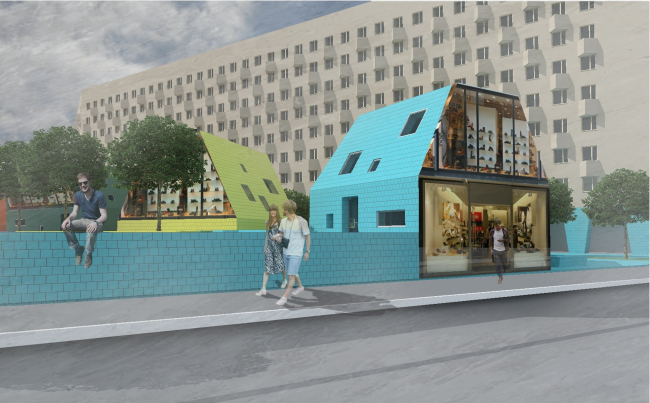 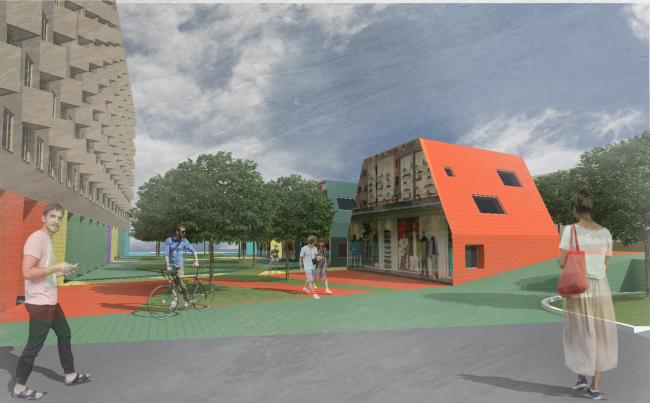