Kazakhstan's Astana is going to get a new "Palace of Martial Arts" designed by "Studio 44" architectural office. And, even though the dimensions of the future sports center are fairly modest, it promises to become an important accent in the capital's panorama.

Less than a year ago, Nikita Yavein's team completed the construction of the Children's Art School in Kazakhstan's capital. And, even though now "Studio 44" is designing a project of a quite different typology, the Palace of Martial Arts may be viewed as the logical continuation of the team’s work on the new image of Astana. All the more so, because this center was allotted by Kazakhstan's capital the place that is most important and prominent from the city planning standpoint - this sports complex will complete the axis of a grand-scale esplanade that leads from the Defense Ministry building to the new housing developments in the southern part of the city. "Probably, one of the main problems that this project laid before us was the search for the optimum ratio between the dimensions and the architecture of the object itself, and the spaces that it was meant to be "holding", - Nikita Yavein shares. The architect is not exaggerating either: the city of Astana that is literally being created at the government’s will, has practically no "small-scale" buildings at all - this city is made up of huge clusters, each of the buildings being a prominent centerpiece in its own way. The mentioned ministry building is no exception, and the esplanade that starts from here is a wide giant boulevard that stretches for blocks away. Naturally, such a huge axis cannot just break and stop, but what do you do if the designed palace is but three stories high? The architects found a solution, though: the designed volume is treated as a "scenery" object, which creates the effect as if the whole boulevard "soars up" taking on a new dimension, the main accentuating element being the roof - the "traditionally strong point of the palaces of sports", as Nikita Yavein explains. The land site that completes the esplanade is turned by the architects into a landscape park broken into geometric segments by the foot walks - these same shapes in fact make up the city plan of Astana. In the middle of the park there is the hill, which is in fact the Palace of Martial Arts in question. Behind it, there is a capacious parking garage that is very neatly masked by the green slopes. This is not the first time that such composition technique - "growing" the building up from the landscape - is used by "Studio 44": in Nizhniy Novgorod the architects proposed to hide a football stadium into a giant hill, and in this same city of Astana two years ago they designed the Museum of the History of Kazakhstan in the form of a ziggurat "inscribed" into a park. Neither of these two projects was to come to pass, so the architects did not think twice about using their ideas from the days back, combining the striking design with maximum feasibility and practicability. The green slopes of the hill serve to conceal the two-storey stylobate of the building, where all the necessary for the sport center facilities are grouped together. These are the lobby with a cloak room, the workout rooms, the warm-up gyms, the medical center for sportsmen, the mass media room, and even the VIP rooms. What rises above the hill is only the public arena with the stands and the commentator's booths, while all the "indoor" life of the palace will be going on at the two lower levels. This is done, first of all, with a view to provide for the deconfliction of movements: the athletes and the service personnel will not get in the way of the spectators who will be able to enter the building not only from the ground but also from the roof of the hill that is designed as the public open space. This elevated sightseeing platform will be accessible both from the palace and directly from the park - via the numerous gently sloping stairways. As was already mentioned, the charismaticness of the building is based first of all on its roof. From the bird's height view the palace looks like a set of reel drums with their film sort of sticking out at some places and thus giving the image of the building some extra intrigue. En face, these drums turn out to be arches that are open end to end - it is from them that the architects assemble the large-span shell above the sports hall. On the layout, the arches are shifted in respect to one another in such a way that their belts are only connected on part of the span, further joining the arches at different heights. The openings that come as the result of the architects employing this technique create a silhouette that is simple but memorable. The edifice on the hill looks a bit like a railway landing stage that the architects first took apart and then put back together again, deliberately putting its elements in the wrong places. One can also liken the roof to a multitude of bridges thrown across the hills, some of which go a bit higher and some - a bit lower, together forming a picturesque arcade. The authors themselves claim though that such tense composition is meant to bear resemblance with "muscular fighters whose bodies are braced in the controversial unity of the fight". In any case, the roof assembled from the arches, very expressive as it is, looks particularly striking by the contrast with the soft outlines of the hill. Combining in one building elements of landscape design and extremely technocratic completion, the architects of "Studio 44" convey the character of the contemporary Astana with perfect precision: this city combines the grand-scale parks with ambitious hi-tech architectural projects.
Text by: Nikita Yavein, Anna Martovitskaya
Translated by Anton Mizonov 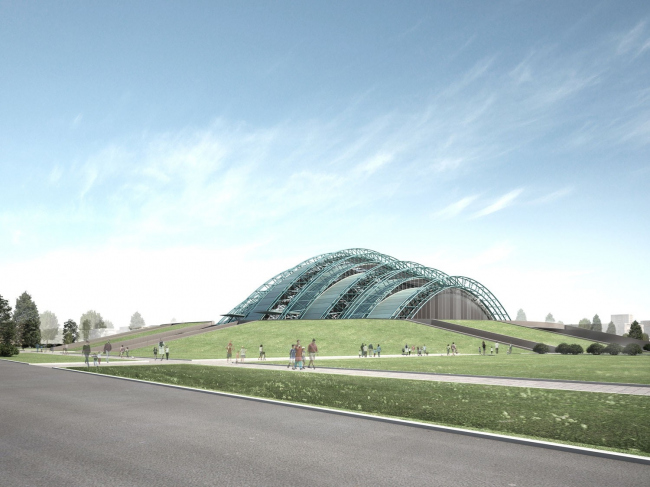 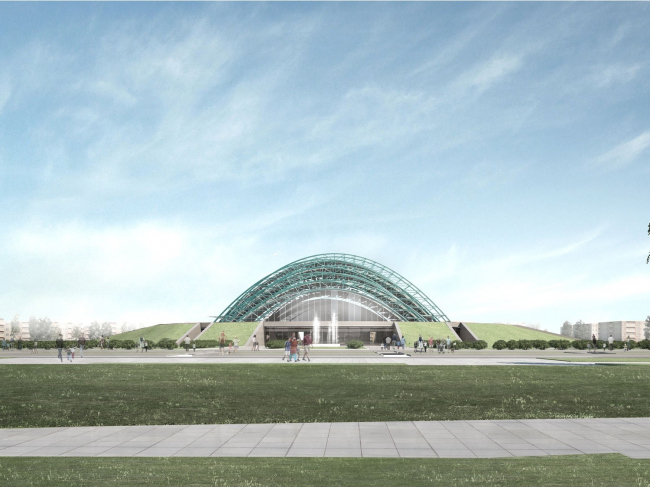 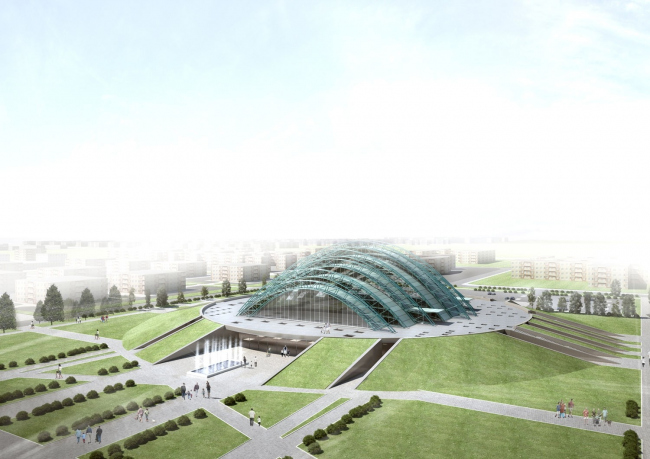