The architects from the ‘PANAKOM’ keep on creating residential building projects for the third order territory of Nikolskaya Sloboda village. This is the fifth project. Again, they deal with the site that boarders with the public zone of the pond. Some previous ideas have been applied here, but some new ones used also, making it original. The authors consider this architecture to be biomorphic.

Outside, the new work looks like a project of a large house, placed on the opposite bank – same wood siding, same white molding. The arrangement of the volumes is quite like symmetrical twins from the project ‘the central zone development’: more flexible volume, enclosed in its own shell, like a snail, glides onto the stone box beneath. But the orientation system is absolutely different from the mentioned earlier projects.

Though the site is by the pond, the water is almost unseen from there. So, not counting bedroom bow windows, viewing this side, the authors made the house, so to say, isolated. “Imagine a line, with rooms installed within it; starting with the most public part – entrance, and the most private one – the house owner’s bedroom. It will be long enough then, - tells one of the studio’s leaders, Nikita Tokarev. - To fit all these on the site, we have doubled it and the private part is on the second level” “In this way the bed-room is over the entrance, and the arrangement on the whole reminds of a snake, biting its own tail”,- the architects philosophize. High ceiling in the bedroom makes it look very much like a head of a yawping snake. The place chosen for the part where it doubles is the living room, which in the modern fashion has got two lines of windows (occupies two storeys. Also the line of the ceiling echoes in the stairs, that is a part of the room’s interior. Service space is not included into the ‘line’, these rooms are gathered into one block on the first level, and, this, actually, is the foundation, on which the upper part of the ‘flexible’ body is creeping, with head-bedroom. The architects are planning to face the below part with stone not only outside, but inside, to make the strict boarder between the living part and not. Or it might be between alive and not?

As soon as all the service space is placed ‘under the snake’, the rest is placed into the basement. By the way, this is not the only underground place on this site, also, in the other building there is a swimming pool, marked by the small house with a rest-room and terrace with the view to the pond. All the buildings are connected with the underground ways.

The architects have decided to make the room of the underground swimming pool in the shape of a cave, so from the three sides the water comes up closely to the walls. At present, there is the idea in the project to make a special center, which allows not to make swimming pool nosing along the walls, but hide it deep in the water. 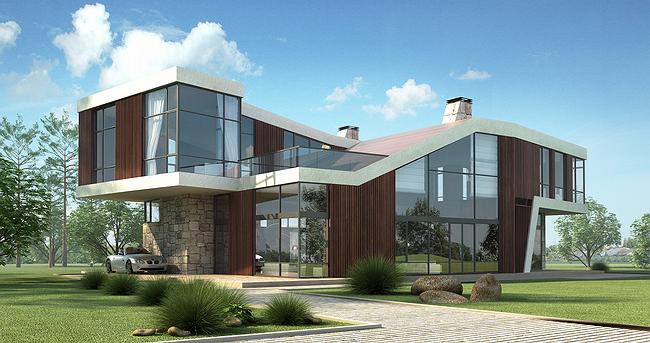 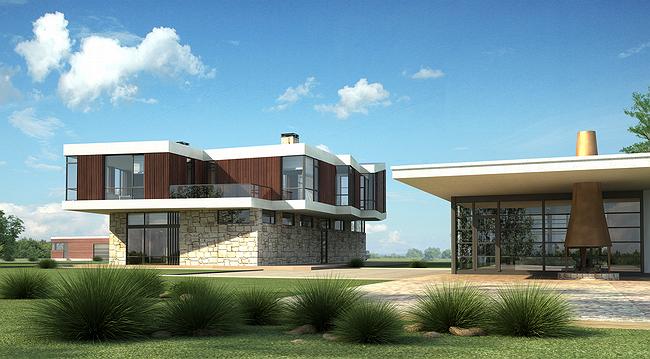 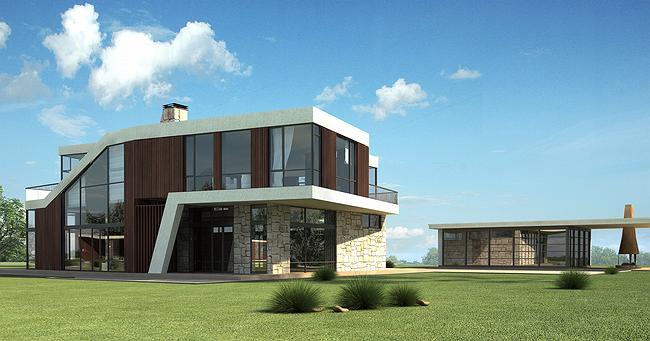 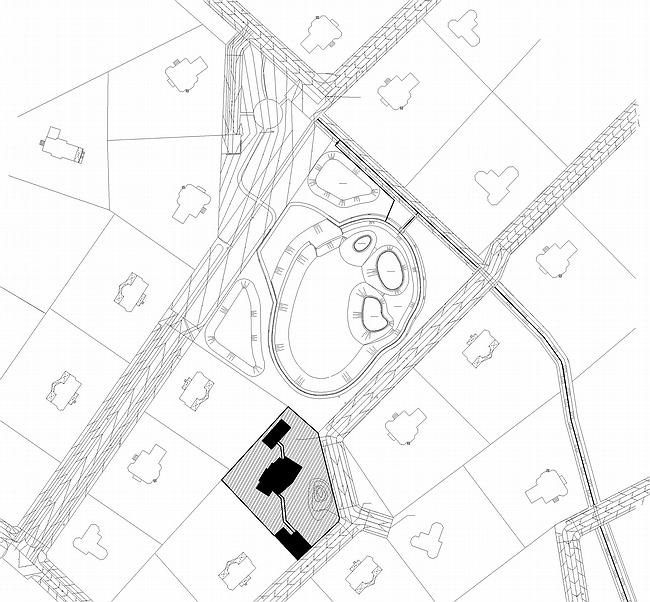 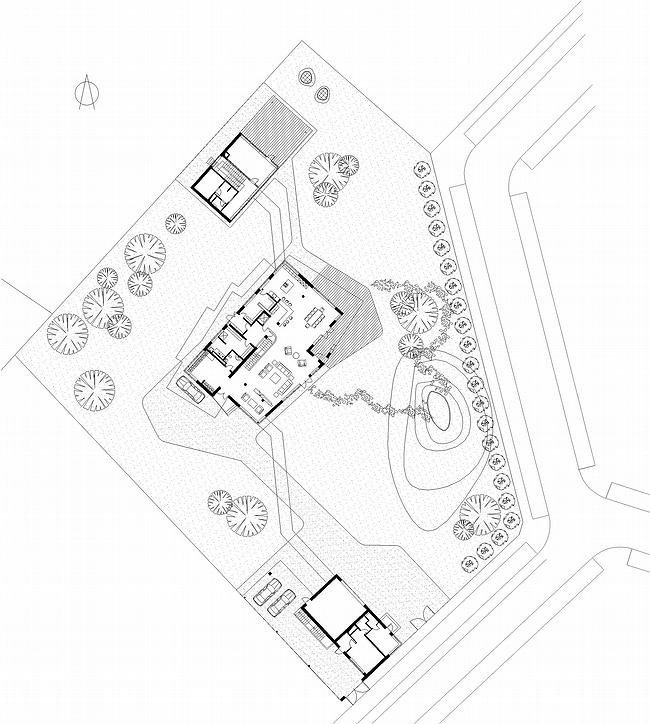 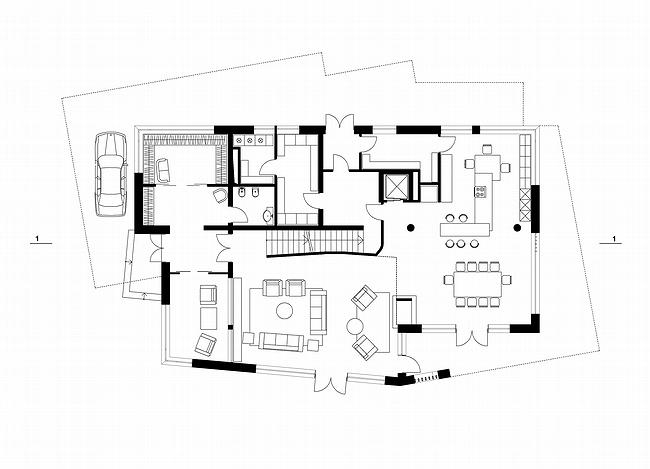 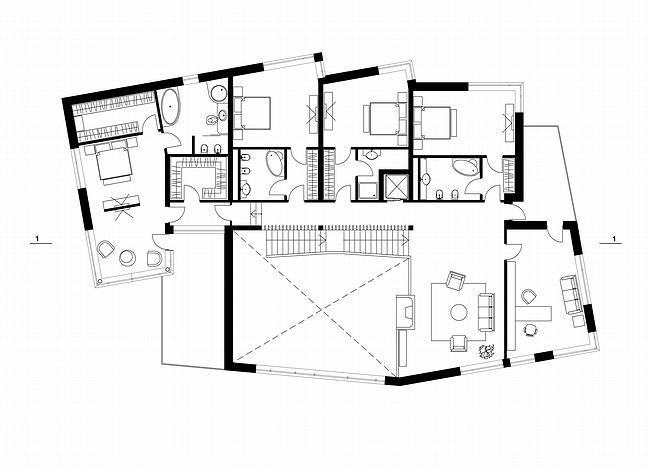 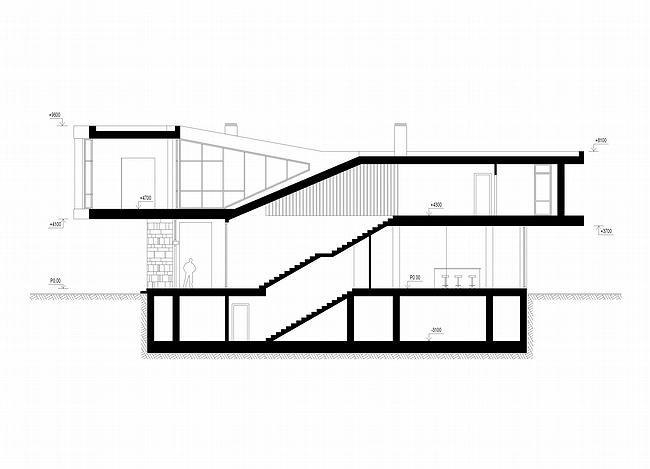