Vladimir Plotkin and Roberto Meyer offered to Moscow City a new tower typology – a block consisting of a few buildings put on the “shoulders” of one another and thus forming a silhouette of a symbolically rendered letter “M”.

The architects decided to make this building both a landmark one (just like all of the skyscrapers) and at the same time original, i.e. make it look different from an ordinary skyscraper. The entire building site is taken up by the nine-story high stylobate pierced with triangular openings of multi-level atria and open-air courtyards. The roof of the ninth floor is covered with green planting, and it is further on that the most interesting part begins. Instead of growing upwards in a successive fashion, just like any other city tower would, the building makes a radical change of concept: the green roof of the stylobate supports three 23-story triangular buildings spaced out by a 20 to 50 meters distance. The roofs of these three buildings, in turn, support yet another couple of triangular houses, 19 floors each. The upper mark meets the height restriction of this building site - it is 224.4 meters high. There is yet another solution, 280 meters high, where the three lower towers are 33 floors each, and the upper two - 41. Put together, the whole building looks like a city block of several houses that stand on top of one another's shoulders like circus gymnasts or like cards in a card castle. This is, to put it mildly, an unconventional way of building up the mass: not the classic pyramid, not modernist vertical, and not even the more sophisticated "house on legs" or "mountain house", a tectonic pile-up of terraced apartments. What we see here is a city block that strides upward not with its mass but right out with its building units. At the same time, this IS a modernist block (neither "Reserve" nor MVSA would settle for less), and this is why the spaces are laconic and spaced out at a fair distance from one another. The silhouette of the building now looks a lot like the letter "M" if viewed en face from the side of the Kremlin or Kutuzovsky Avenue. It will only be fair to mention, though, that the M-shaped buildings are by no means a novelty for Moscow City, the trend having been set by the project of Moscow Mayor's office by Mikhail Khazanov, the red tower echoing the "saw tooth" of the Kremlin wall. In the Reserve/MVSA project, however, the M letter is really "geometrized", almost made up of pixels, as if a small font on a jpeg image when stretched too much. The symbolic "M", when viewed from the side of Kutuzovsky Avenue, stands to the left from the silhouette of the City, logically preceding it and forming together with it a symbolic "M-City" - which gave the name to the entire project. Functionally, this development, just like any other megastructure of this type, is a mixed-use one. The three-level underground parking garage plus the four parking levels above the ground form a powerful "technical belt" that also sports a number of shops and a hotel. Higher up, the stylobate is occupied by the offices that are grouped around the above-mentioned triangular atria; they are multi-level and, in the project, are covered with a glass grid and decorated with hanging plants that will remind the office employees of a tropical vacation, and to the more educated ones - of Semiramis hanging gardens. Out of the three towers of the first level, two are occupied by offices, and one - by apartments; both of the two top towers are apartment ones. After some deliberation, the architects decided to make the façades striped, with floor decks protruding as terraces. Thus the whole building resembles the pieces of a neatly cut sliced pie: the thin slices of the terraces alternating with the glass filling. The outlines of the sliced terraces at times sink into the glass and at times stick out, turning their curious "noses" in different directions - their unobtrusive flicker creates the impression of various forms of life with the sophisticated façade system.
Text by: Julia Tarabarina
Translated by Anton Mizonov 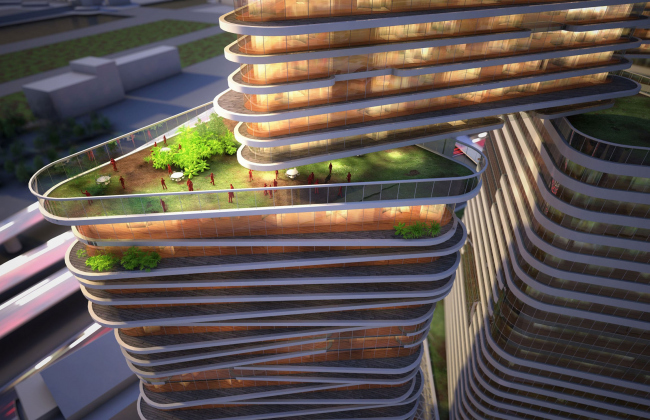 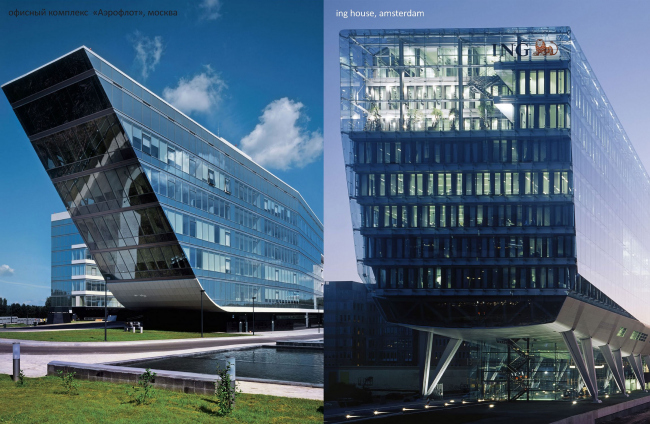 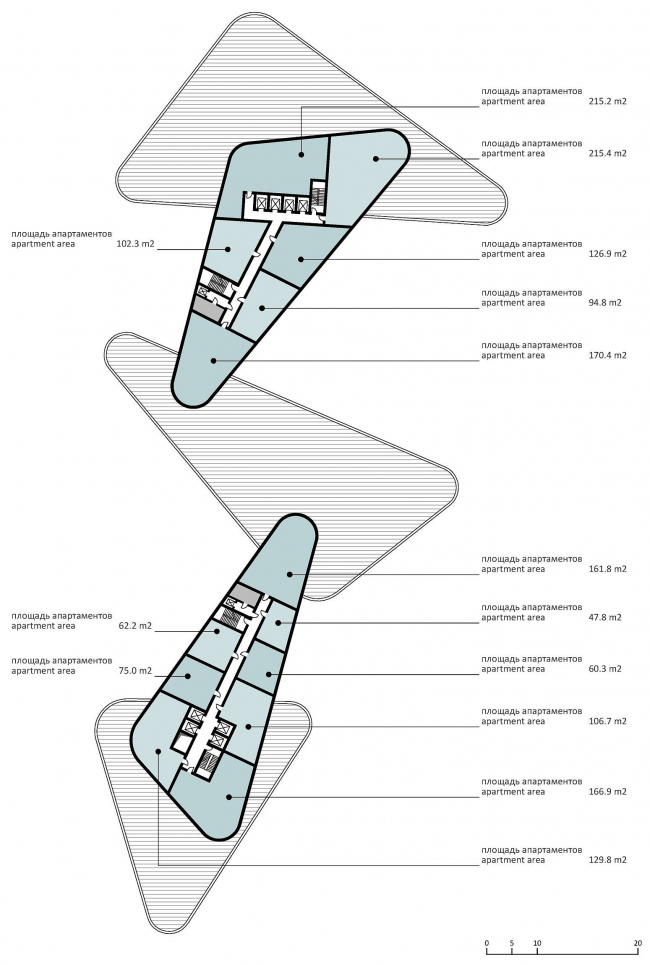