In Dubna, one of Russia’s most famous Science Towns, located in Moscow area, PANAKOM architectural studio has designed a living block meant for young researches and scientists and their families.

The land site, the development of which was planned by the architects Nikita Tokarev and Arseniy Leonovich, is located in the immediate vicinity of the Volga River, and that's why from the very start it was planned that the new block would have a landscaped embankment that the residential houses would overlook. Because the demands of the developer and the various authorities underwent a few considerable corrections in the course of the work, PANAKOM came up with a whole number of different project options. Arseniy Leonovich shares that the project was constantly changing slowly but surely drifting in the direction of cut budgets and maximum rationality. 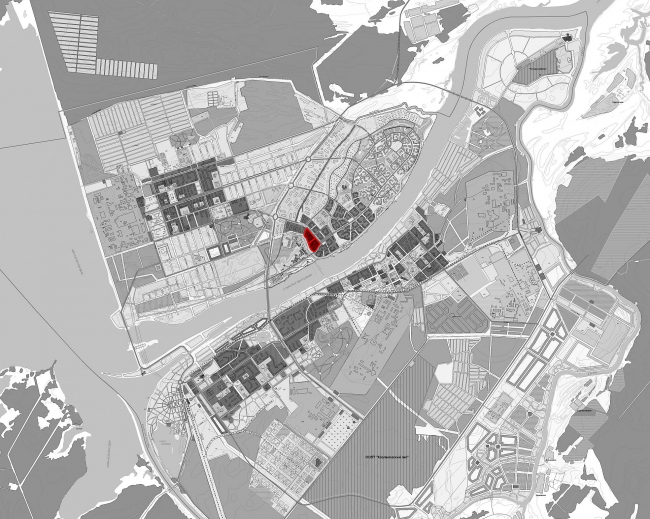 In a nutshell, the economy factor of the future housing was one of the key points of the specifications, so the architects concentrated predominantly on making sure that the modesty of the budget would not affect the aesthetic side of the development too much. For one, to meet this challenge, they came up with the solution of a residential house that consisted of two small towers "pinned" on one shared communication axis. The layout shows that the two rectangular sections are juxtaposed in such a way that they overlap and share one common corner, and it is here that the elevators and stairways are run, to which the flats are connected with corridors positioned at different levels. The resulting "residential unit" was aptly called "Binominal" by the architects - which not only reflects the typology of the building but also sounds very much in the spirit of the Dubna tradition. What is interesting is that such binominals can be built not only in single pairs such as this one but also form long "formulas" – within the scope of one living area the architects are trying out this and other scenarios. The trapezoidal shape of the plot, one side of which faces the Volga, and the other, respectively, the future technology park, prompted to the architects a simple and rational layout solution in the shape of the letter "A". The letter "A" is carefully inscribed into the boundaries of the land site, its main strokes serving as pedestrian walks, and the horizontal stroke serving as the sports ground with a tennis court. And the other perimeter of the trapeze is occupied by the residential houses themselves – the separate "binominals" standing on the narrow sides of the plot and connected into a chain running along the road that leads to the administrative centre. The closer to the embankment, the sparser the housing: along the river, the architects are planning to build six "duplex" cottages - also binominals of sorts, only high-end ones. The romantic idea of combining houses of two different types within one block was, regretfully, turned down, and the architects had to substitute the cottages with apartment houses. This is how "Plan B" came up. He we see the same "rake" running along the traffic way and separating the backyard from the road, and the same "coupled" little towers on the narrow sides of the site, while the embankment has the same "binominals" that are spaced out as far as possible so as not to block the river view from the houses behind them. 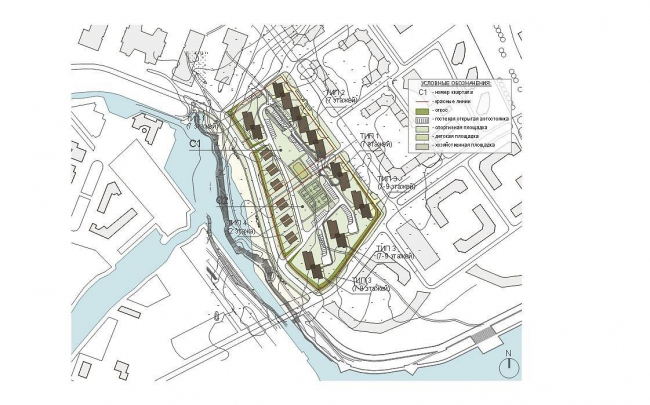 Sadly, even the substitution of the cottages for apartment houses did not fully satisfy the contractor, and the housing density had to be raised again. In the "B" option the architects are in fact creating two blocks rolled into one. The entire perimeter of the land site is filled with houses, the chain of them partially curving into the depth of the block, highlighting the main driveway to its territory.
Text by: Arseny Leonovich, Nikita Tokarev, Anna Martovitskaya
Translated by Anton Mizonov 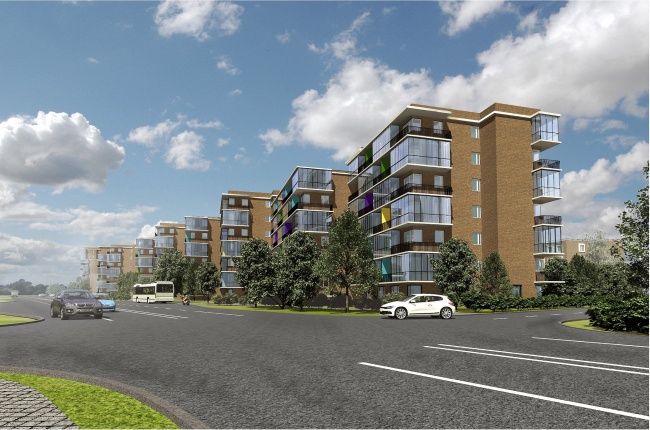