The ADM architects have come up with a project, according to which the complex of buildings of the former Research Institute for Vitamins turns into an up-to-date and comfortable business park. This is yet another project by this bureau that implements the sustainability principles into Moscow's everyday life. All the artistic devices that were accessible to the authors were used for the embodiment of the symbiosis of Nature and Human Knowledge.

The business park that was created by Sminex developers is located in the southwest of the capital, in the Nauchny Driveway, not far away from "Kaluzhskaya" metro station, in one of those few neighborhoods that are notable for the abundance of open spaces and green planting. The neighborhood of the Nauchny Driveway is not so much a street but rather a borderline - it starts from the and in flows back into it again, after describing, to the north of the street, a large semi-closed territory of about , upon which a whole number of various organizations is situated.

The site of the future business park whose total area amounts to two hectares, has the shape of an almost perfect quadrant with two small rectangles glued to it from the north and from the east. Before the start of the implementation of this project, it housed a five-floor brick house built back in the 1970's in the best traditions of the Soviet office style, and two lines of low-rise administrative buildings. It was this "raw material" that the architects were to use in order to sculpt, in the renovation manner, a completely new district, different in shape and essence.

Taking into consideration the peculiarities of the area, the architects proposed for the future business park a "green", nature-oriented image. The facade design is based on three materials - glass, ALPOLIC that simulates wood, and the Finnish fiber-reinforced cement (). Depending on their construction properties, the eco-finishes are used in various proportions from building to building. The design of one building is prevailed by wood, another - by glass, yet another is decorated with green . The carefully selected combinations of these materials create a single image, thanks to which the business park creates an impression of a real oasis spread on the territory of the metropolis.

The tallest building of the park is the five-story volume stretched along the Nauchny Driveway and separating the park from the traffic way very much like the . In the center of this building, "the main gate" is located - the checkpoint that gives access to the territory of the park itself. According to ADM leader Andrew Romanov, the architects had the most challenging time of all while working on transforming the facades of this building. "It had ugly "Soviet" proportions - wide espacements, and almost square windows. Such windows do not seem to fit in any kind of rhythm. And what we wanted was make the espacements come alive so as to make the facade look more dynamic" - the architect explains. The square windows became rectangular, stretching almost down to the floor. The espacements got vertical panels of simulated wood, while the windows got the "vitamin" yellow-green inserts above them.

The floors are separated by horizontal belts of metallic l-beams. This approach has already become the trademark sign of ADM architects. The metallic stripes align the windows and panels into neat horizontal arrays and generally organize the facade. This impression is enhanced by the vertical ALPOLIC slabs that are fastened next to every other window perpendicular to the facade. Apart from the aesthetic function, these elements, resembling open window shutters, also serve as screens that provide protection from the slanting sunlight and create the effect of the facade being actually 3D, adding to its lightness and openness. In the upper tier of the building, similar panels form a tight grid that masks the technical equipment and the maintenance floor. The other buildings of the business park are situated in the depth of the site that, thanks to the abundance of trees and bushes, looks more like an edge of a wood rather than the territory of a former research institute. Here, according to the architects' plan, two rows of existing buildings were renovated. As a basis for this project solution, the architects used their favorite genre of "office townhouses" - ones that are grouped together, each of them having an entrance of its own.

Being resonant with the "chamber" scale and the cozy situation of the buildings inside the land site, these facades sport a more open look: they have large panoramic windows, and between the "wooden" espacements there appear extra glass panels. Thus the windows are perceived not as a purely functional part of the building but become a part of the rhythmic alternating of vertical stripes of glass and wood. The green panels blend into a stripe that pierces the facades horizontally, in unison with the metallic "rails" of the l-beams.

On the roof of these buildings, the architects have designed a whole mini-park: wooden pavement, transparent railings, little tables, barbecue spots and even full-size trees that grow out of the rectangular pedestal tubs. The mini-park on the roof becomes the harmonious continuation of the green territory of the business park. In the two-story building, the idea of "a park within a building" is implemented in a slightly different way. Here, the trees have "come down" from the roofs to the small stanzas located in front of the offices.

In fact it is the nature itself that becomes the centerpiece around which the architecture of the business park congregates: the color of wood and verdure, the glittering glass that reflects the trees, and the transparent glass through which one can see the trees. The buildings either simulate their natural surroundings or strive to melt into them.

The space of the business park that practically "dissolves" all of its buildings, will also get improved in the spirit of ADM architects that pay a lot of attention to the landscaping part in their projects. It has been decided to design the park in the English style - with the trees and grass growing wild, most of which the architects will keep intact, adding some extra ones. In the hot summer days, the natural green carpet will please the eye with its freshness and openness, living up to its name - a business park, park being the operative word. 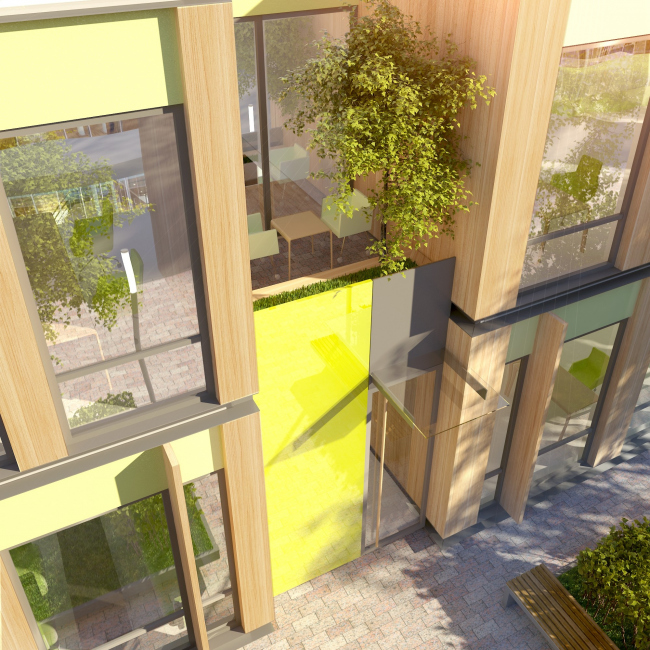 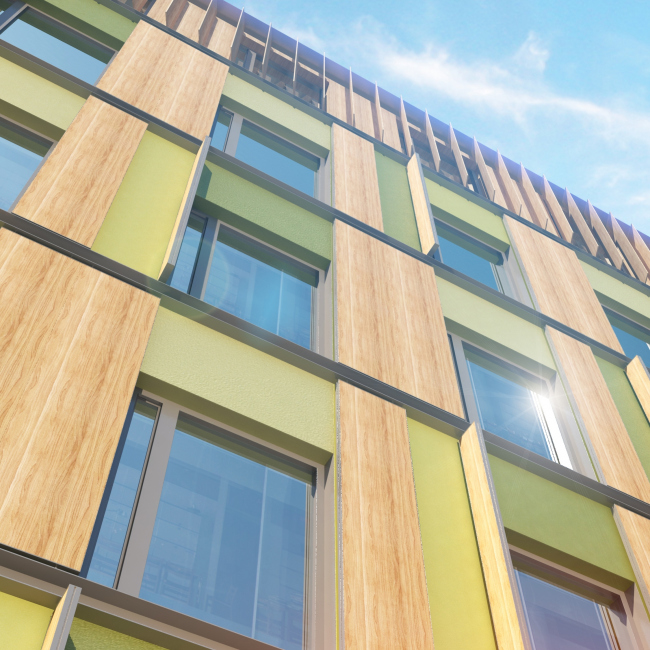 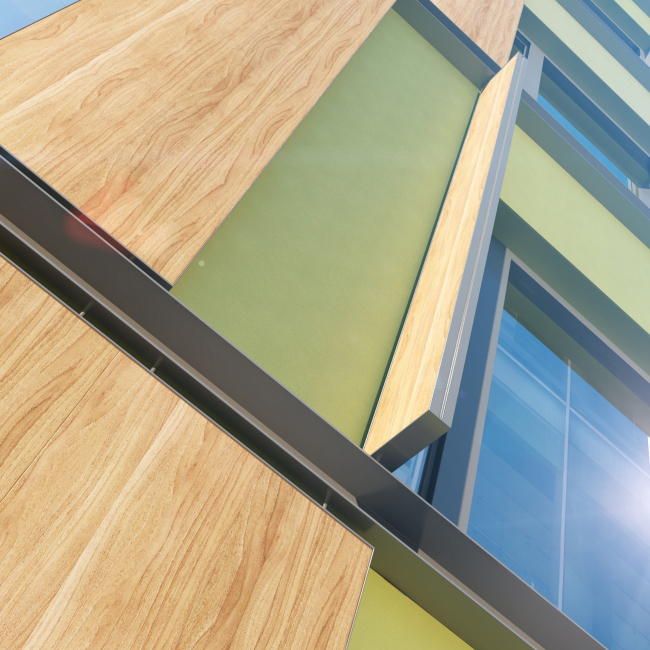 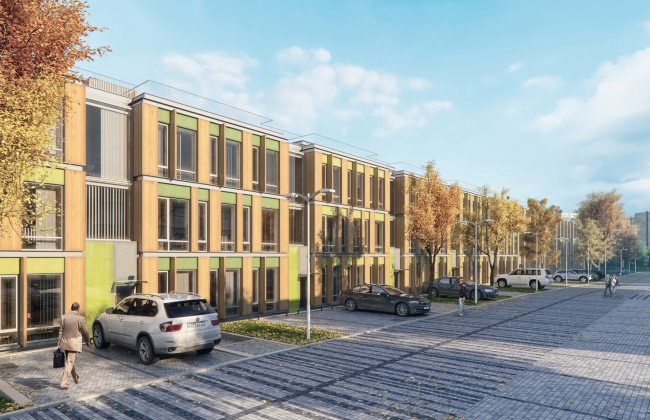 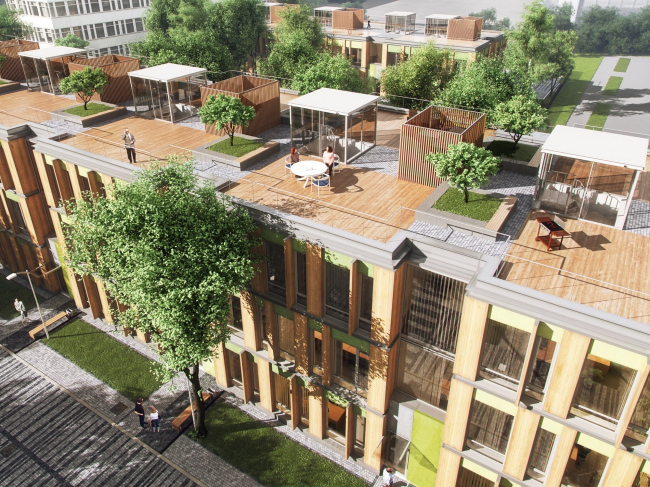