On Saturday in the village Nikolo-Lenivetz of the Kaluga area the second festival " ArxStanding ", devoted to conceptual judgement of winter and farewell to the Pancake week has passed. The bureau «Moscow», « Icing of architects » and magazine « Project Russia » have added to 13 objects which have remained after the summer festival of landscape architecture three more which in the end of a holiday were burnt as «a scarecrow of winter»

Village Nikolo-Lenivetz is a conceptual place. In the beginning of 2000th years the objects of artist Nikolay Polisskogo who by means of local residents has constructed there some objects at first from hay, and then - from fire wood, has weaved from branches the "media-tower" and has occupied the whole field by snowballs, appeared there. Then objects of «Nikolo-Lenivetz crafts» started  their tour, to Nizgnij, and then - to France, and at last in the last summer, have extended the framework of "crafts", the architects have joined them, and the festival " ArxStanding " which has inherited the name from historical standing on Ugra when in 1480 khan Ahmat has come, staid for a while and then has left and this way the Tatar-Mongolian yoke has officially ended.
Almost 16 objects were constructed in Nikolo-Lenivetz in the summer, some of which were kept for the different utilitarian purposes, and the some just simple so. Winter ArxStanding has been dated for the Pancake week and three projects became its heroes.
According to curators, Julia Bychkovoj and Anton Kochurkina, in the winter all nature is covered by the snow, so the alienation between the nature and the person reaches its maximum. In the winter «we are compelled to go, having muffled from a head up to legs as cosmonauts in a survival suit and drink vodka not to freeze». The purpose of festival - to reduce this distance and «to make winter communicative».
Actually, the pancake week is such a holiday which always had the aim somehow to build the communications between the person and the nature, mainly with the purpose to influence the nature - to burn winter to make the spring come. And the communications between people in such cases is adjusted by itself. There is nothing more communicatively then a pancake week. To tell the truth, nowadays this holiday repeatedly killed and revived, has turned in a formal-national, a little bit fancy-dress outdoor fete with professional actors in roles of buffoons. A pancake week in Nikolo-Lenivetz was not such, more precisely, not absolutely such. Suits, an entertainment and « outdoor fete » here took place too, but among ephemeral scenery from long wooden stakes. Remained from the summer standing « Nikolino ear » by Savinkin and Kuzmin, children used to jump into the snow, and hanging above the bank of the river Ugry « Half-bridge of hopes » made by the workshop Bakshaev has collected long line from interested persons to get the feeling of flight.
By the evening the authors of  the winter « ArxStanding » represented their objects. Architects of a bureau «Moscow» in the project « Winter communications » have filled by hay a long polyethylene pipe, and named it "heating main", they suggested all wishing to sit at a fire. It has turned out simple and practical – people sat on hay, they threw hay in fire. That on hay it is possible to sit even in the winter - certainly, approaches to the nature, however it is necessary to recognize winter communications devoted more likely to dialogue between people and in general it there was the most "human" project. Other two projects have turned out to be not so actual.
Especially organic beautiful, but cool has appeared the nature of the winter in Nikolo-Lenivetz for «Icing of architects» which have iced over down to transformation into large penguins. A theme of the communications here acted in the form of a teleport: authors have built from a snow a cubic small house, whence in due time send the penguins transferred, probably, from South Pole. In spite of the fact that they were a little bit larger than usual, penguins behaved themselves very naturally - posed for photographers, wandered on a glade, not being afraid of people, and from time to time made marriage games.
The most complex and thoughtful has appeared to be the object “In fire” by the magazine «Project Russia» where in the form of a breadboard model three variants of the communications have been built. On the one hand a small wooden house in scale 1:7 burned, and all present could sympathize to toy voices calling for help, on the other - a perspective framework with a point of coming across somewhere above horizon, « a window in the sky », a way to dialogue with the higher forces. Spectators, standing on a round scaffold before the frameworks, admitted that the sensation, « that someone from above looks at you» appearred.
The whole unit of interactions has turned out: one spectator empathizes those who burn in a toy small house, another appeals to heavens, and between the sky and a small house there are own communications - the sky through the schematic chamber looks at the dramatized everyday tragedy, and whether it is going to help, whether it is not.
On a plan of authors, two kinds of a boundary situation were combined here - mythological-cyclic, Pan cake  when on crisis from the winter to the summer it is necessary to burn something, and theatrically-drama.
Text by: Irina Filchenkova 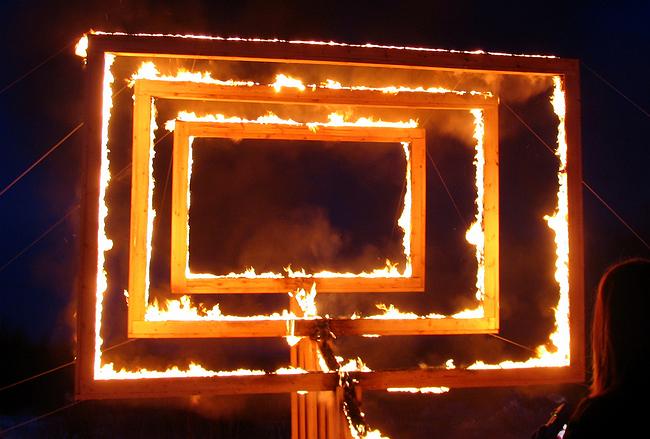 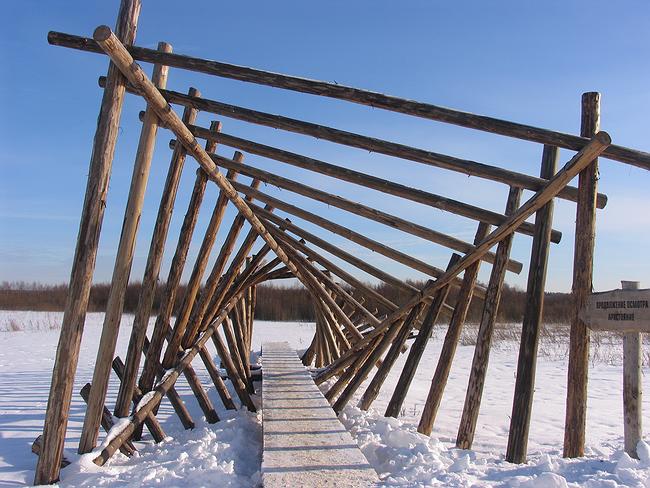 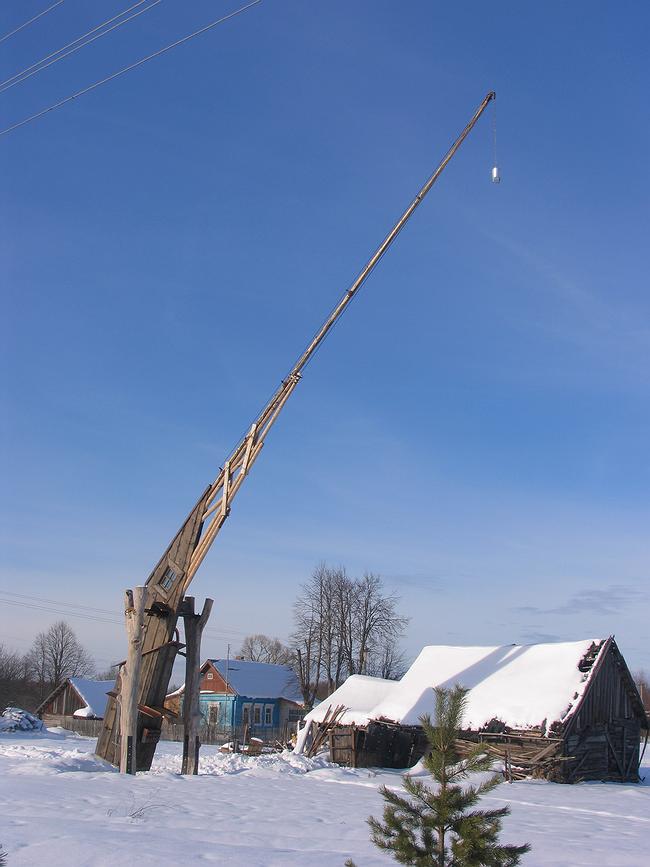 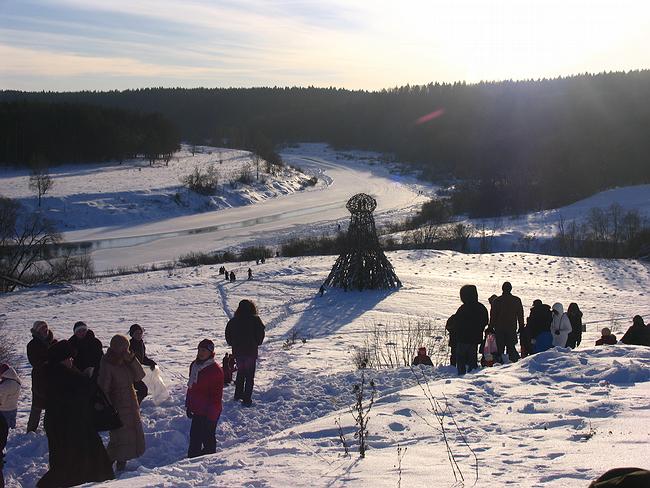 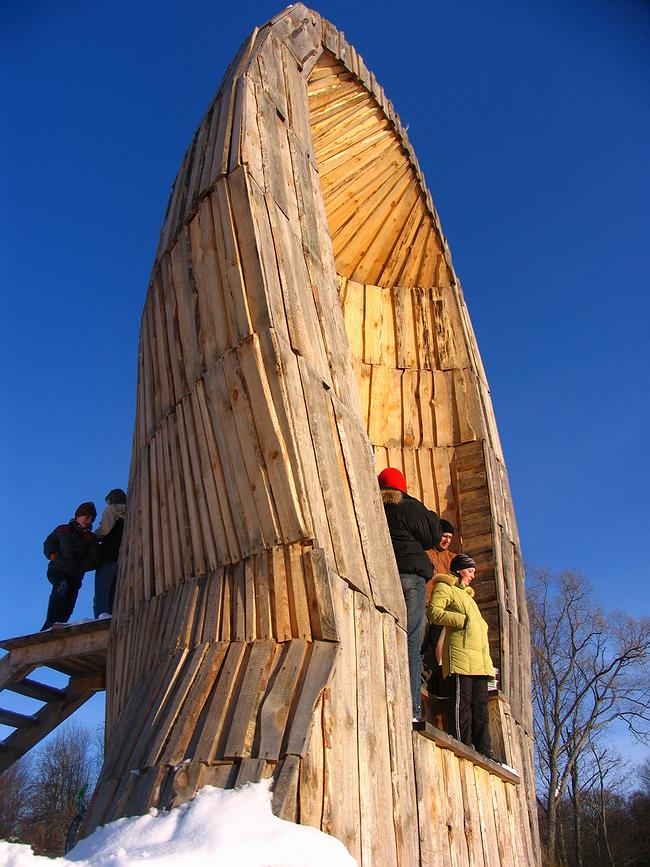 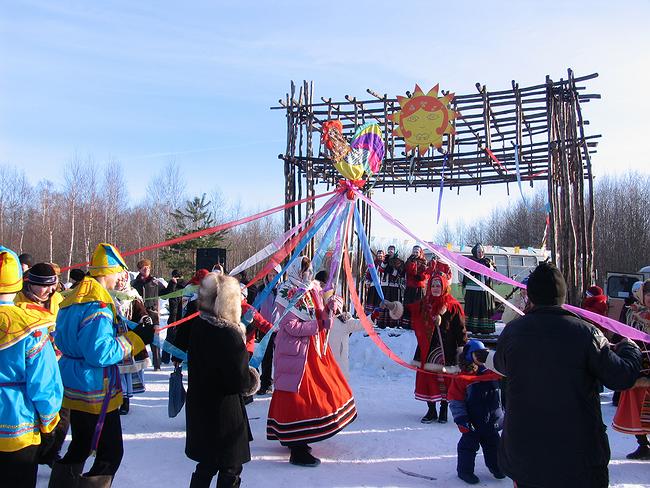 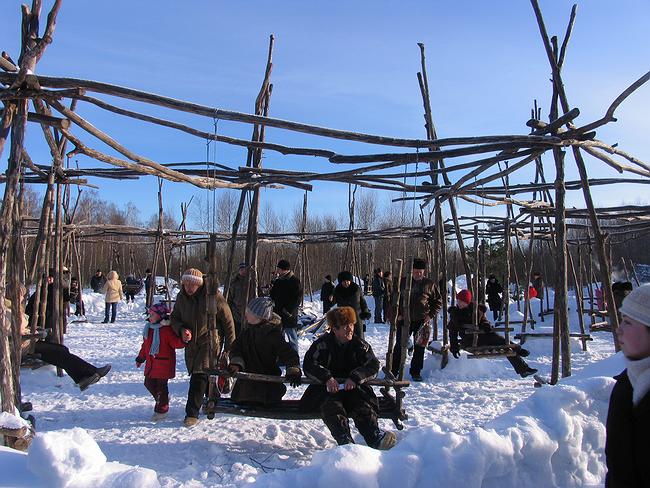 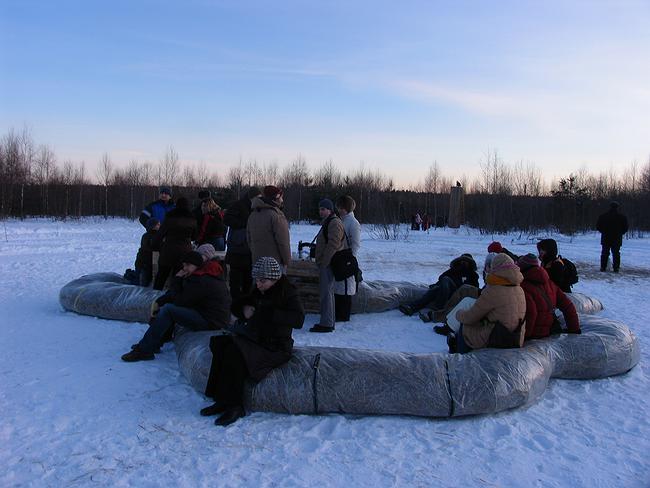 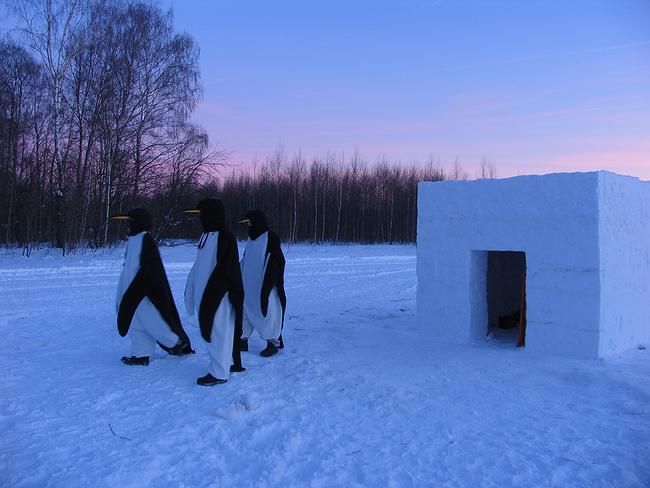 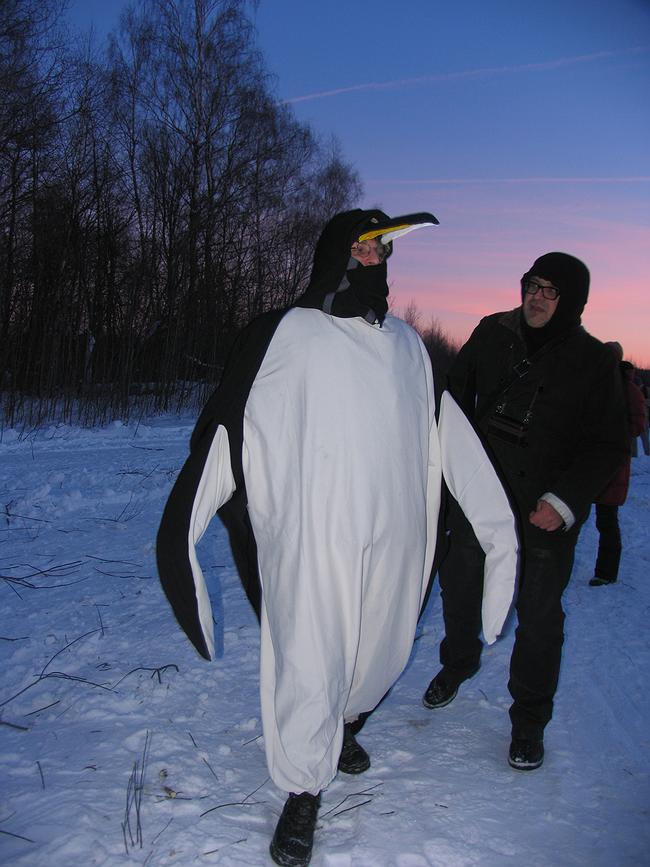 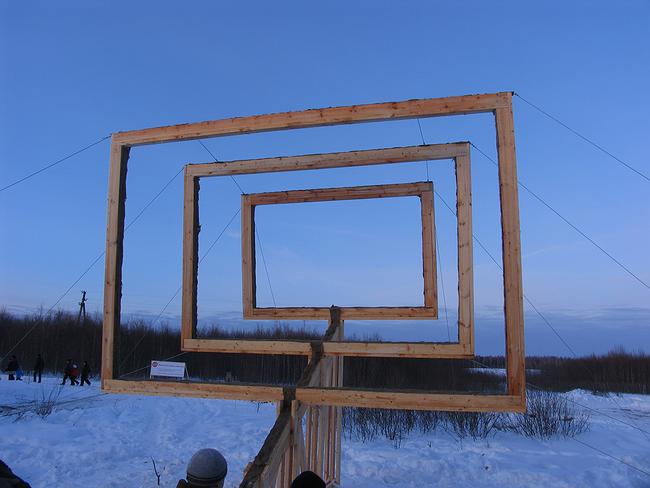 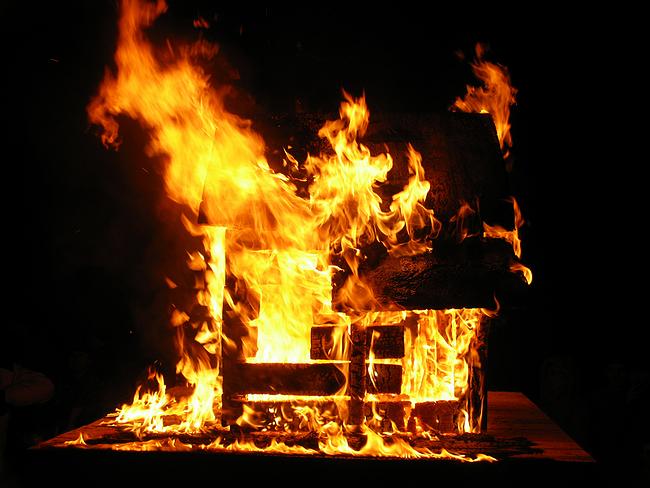