Terraces go down to the sea

Private family type boarding house built in Sochi under Vladimir Bindeman’s project is an example of a quality and an elegant resort architecture, lack of which has been acute in this city over the over recent years. While the future Winter Olympics host is being hastily built over with large-scale residential, hotel and sports complexes, Vladimir Bindeman and his co-author Natalia Kotova have implemented their project in the very heart of the famous resort, it organically combines simplicity and comfort, refined laconism of forms and complexity of design solutions.

Today many of those who fond of seashore holidays prefer their own housing on the coast to hotels, rented apartments. Though, usually they just buy an apartment, it is not problematical in Sochi. But when friends or colleagues are prospective purchaser there comes the idea to join and build a private residential complex. Vladimir Bindeman, the head of "Arhitekturium" studio was commissioned to design 6 apartments, with 200 sq m total area each. The building site is in the centre of Sochi, nearby “Svetlana”, one of the most famous spa resorts in the city. The seashore is near at hand, as well as the famous Sochi circus, "Winter Theater”, the main seaside promenade and the Arboretum. From the south-eastern side the side borders with loud Chernomorskaya street and its north-western side is adjacent to the monument of architecture "Doctor A.V.Jacobson Dacha” of 1902 (today it is one of “Svetlana” buildings). It is situated on a fairly steep slope and has long been considered a part of the park area. The clients had few requirements for the future apartments: living rooms fronting the sea, 2-3 bedrooms for each apartment and a public zone on the ground floor with a swimming pool, gym, massage rooms and a billiard room. The relief suggested the architects the basic architectural and planning idea: only a few layers of terraces can compensate the vertical drop of 17 m. According to Vladimir Bindeman, nearly at once it was decided to make a "house-stairway" – from afar the complex really resembles a few giant steps for a Gulliver running up to the concrete box of "Svetlana". However, the complicated relief did not allow architects to place the terraces simple one below another – closer to the sea the two complex wings separate a little, "passing around” the awkward edge. The connecting element between them and the main axis of the entire composition is a stairway running from the front ceremonial start from the bottom and is getting narrower at the top. First, the architects wanted to cover the stairway by a translucent structure, but then considered open they emphasize the nature of the southern building, for rainy weather each layer has inlet grates. The most difficult in designing the project was the foundation and the structural layout of the building. The building site has seismicity of 8.5 points (for comparison: sites with seismicity of 9 points mostly are not allowed to be built up) and slump. They are common for Sochi but paradox is that the construction requirements are different for both cases. Seismology demands dividing the building into separate blocks and the threat of slumps, on the contrary, require building a solid volume, and it is almost impossible to settle these regulations. However, the constructors Galina Marova and Stella Melnikova found the solution: first was designed the project of pile foundation and between the future apart-hotel and "Svetlana" there is a special protective pile wall. Only after the project authors were allowed to construct the building with monolithic structure. There are two entrance lobbies in the complex – the bottom from Chernomorskaya street, and the top - from "Svetlana" side, and is also common for Sochi with its steep slopes to the sea. The apartments have standard for the genre layouts: each has a living-room, combined with the kitchen and a dining-room, 3 bedrooms, bathrooms. All the living and dining rooms view the terrace facing the sea, and have panoramic windows. Broad terrace parapets give more privacy to the below apartments, shadow pergolas protect from the southern sun. The building is fully finished with natural stone: basement is "dressed" in the granite, walls of residential and public buildings are decorated with white marble, and the terraces are highlighted by the soft creamy travertine and are covered with larch. Decorative elements - pergolas, banisters, chimney tops – and the swimming pool roof are painted blue, and, considering the “sea factor” the idea is predictable and reasonable. The vertical volume of the elevator shaft, designed as a lighthouse, develops the idea. The pool draws attentions not only due to the bright color of the roof, but its pointed volume, similar to a catamaran floats. The gym area of the apart-hotel faces Chernomorskaya street with the solid rounded façade which protects from the highway noise and elegantly fixes the turn of the road. From the high points apart-hotel looks absolutely open and probably mostly resembles a rapid private boat occupying the most advantageous position: the large ships envy it for its elegance, and sailing yachts – for respectability.
Text by: Vladimir Bindeman, Anna Martovitskaya 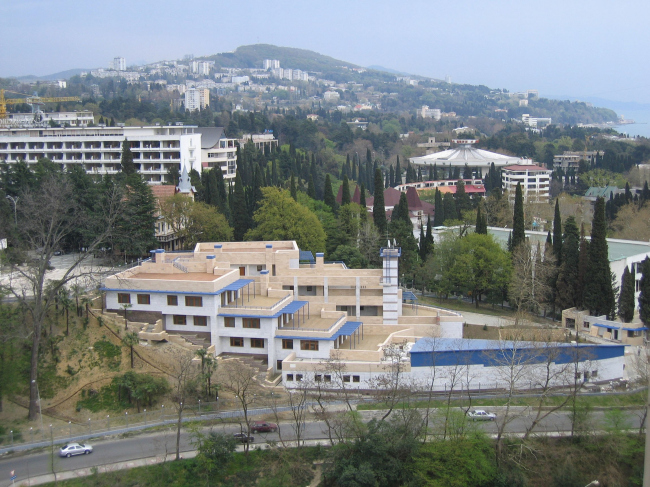