The two buildings, designed by Sergey Kiselyov’s studio in the project of regeneration, by the Pimen church in Novye vorotniki, reconstruct the volumes of the wooden small houses demolished in 1930s. This is why their above-ground constructions are desperately small, and shows how the surrounding area has grown in its height for the last 80 years. The architectural solution, on the contrary, is quite modern: stylized concrete "trees" on facade, glass, and grass on their roofs.

Year by year the idea of “regeneration of a historical building” sounds weirder for Moscow, with its chaotic context of different periods. Nevertheless, quite often it is prescribed for projects of new buildings nearby objects of cultural heritage or just in historical environment. Among them is the project of an office designed by “Sergey Kiselyov and Partners” company for Pimenov deadlock near the Prepodobny Pimen Veliky church in Novye vorotniki (1697-1702).

No doubt, architectural monument, which 350 year anniversary was marked by the Russian orthodox church must be respected. Eight sided construction of the church dates back to XVII-XVIII centuries, the belltower is constructed in XIX century. One of the new side-chapels was designed by Konstantin Bykovsky, interiors were developed by Fedor Shehtel in beginning XX of a century. No matter, in Soviet years there appeared a garage, a 12storey apartment building, a factory and the deadlock lost all the houses, there are only trees left.

Actually, that is the place where the new business complex will be constructed. The lost Pimenov deadlock is being reconstructed, as well as a part of red line of Krasnoproletarskaya street (previously known as Pimenovskaya). Under the ground there will be a parking place occupying the entire area of the site (a canteen will be placed in the upper level of the underground building). There shapes a general underground “stylobate” on top of which there will be a small street – daughter of Pimenov deadlock. And over there are the five concrete volumes, of the same size as the houses that used to be here before 1930. So, there will be a village with a road to the church. Or, to the gates of the church and this is symbolic for the place where lived security guards of the Moscow gates. I picture the scene of white collars smoking by the doors and an old lady in kerchief walking to the church.

In addition to requirements of the intricate idea of "regeneration", architecture of the future complex was influenced by the client – a well-known developer company Forum Properties which is planning to have their headquarters here. They wanted to see their office not only as a practical and high-quality box, but an expressive architectural object, a kind of company’s trademark (such is the “penguin” house of Capital-group). And, must say, quite logical for a developer company.

Yet, the task set for the architects seems paradoxical in a way: on the one hand, the concept of regeneration and the neighbourhood of a monument supposes maximal "modesty" of a new building. On the other hand – it should represent the owners as people interested in arts of architecture. So, it must be invisible and expressive at the same time. Well, "SK&P" works much in the center of Moscow and is used to such paradoxes. Here are used: play of volumes, glass, texture.

In order to transform the five lost small houses into two at least, singly at the both sides, the author put them in a glass fog – its transparent "caps" appear as an original connecting tissue. And such division into two parts also answers the structure of the company-customer which consists of the two divisions. Within, they create an integral space splits easily into corridors and cabinets. At that there are no special multilighted spaces and other fancies – the volume is very small, and it will be occupied by one of the largest developer companies By the way, the company "SK&P" has constructed for the company the well-known office center "Hermitage-Plaza", located at the other end of that Krasnoproletarskaya (Pimenovskaya) streets.

However, glass is not just functional here. At last it is used not to hide a building, but as self-valuable art element. It really looks like an alive substance. The glass volume tightens to the right where the next house changes height from 2 to 4 storeys, creeps atop of concrete blocks and breaks from 12storey building, just where the access path folds to the corner. As if a machine have gone by and set afloat this "cloud".

The image of a small village in fog came later. The project was started in 2003 and the houses were taller, but with oblique roofs, but the idea was rejected by the experts of the landscape-visual analysis. There was another idea to make facades copper or bronze: “Then that would be a monument to remember the former development”, – says the main architect of the project Vladimir Labutin. There appeared a large collection sketches of facades, almost in all materials. But the wooden variant was rejected by the firemen, volume ceramics remained on paper as well, but the attention of the customer was involved with a concrete variant.

Material is fine and modern, but alone is too much brutal to be nearby the classicist belltower. Therefore it was decided to reconsider in an artful way the texture. One of the sketches had the idea of tree prints on the glass, it was transferred onto new material.

This the first such work in Moscow, actually in this project the capital architecture have got a new method of working with well-known, but underestimated material. As is known, the material was explored by the architects of brutalism in 1970, but they saved all the roughness, bubbles, traces of a timbering. The attention was given to natural, "severe" features of the material – in attempt to add a façade a shade of hand-made work as opposite to mechanization of mass industry. Things are different here, the concrete surface is not deliberately unpolished, but it is transformed into a sculpture-pattern and this is the world tendency to create ornamental facades.

As a result the "village" looks like a concrete forest of extending walls between windows, textured by special technology. This is a kind of memory for the lost small houses and for trees replaced them after constructions were demolished. Layers of reminiscences. The concept of "regeneration" has been applied to houses and trees, and in the result there shapes the third. On the background of pink Brezhnev buildings something unexpectedly small, with modern functions, with a grass on its flat roofs. However, it is hard to tell what might see that old lady in this stone jungle.

Today it is an obsessive remark, but – crisis, crisis…But today no one knows for sure whether their project will be realized or not. That is true for most of the architectural works started before the last fall. 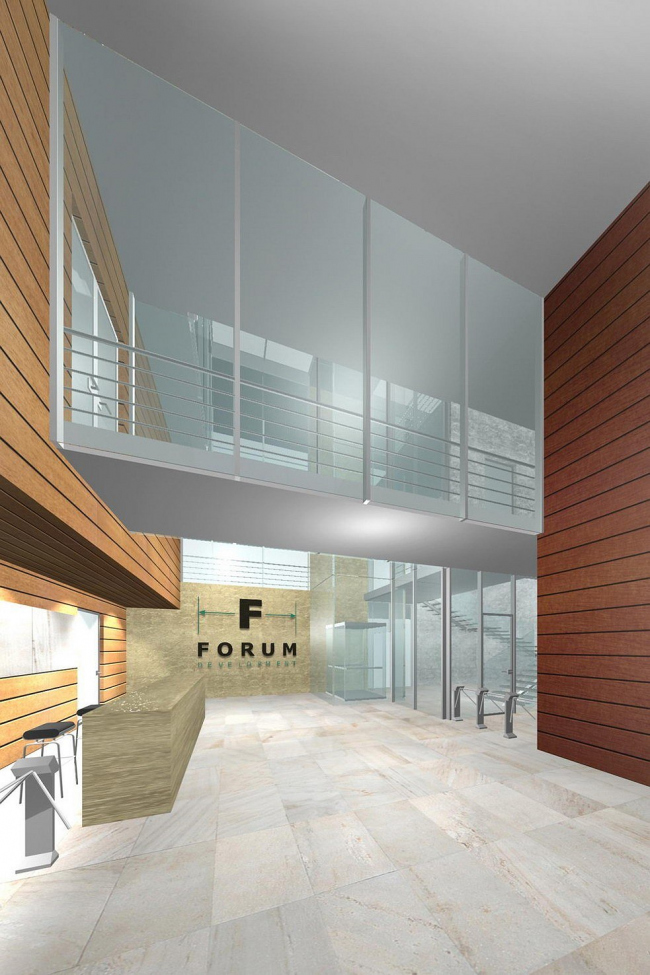 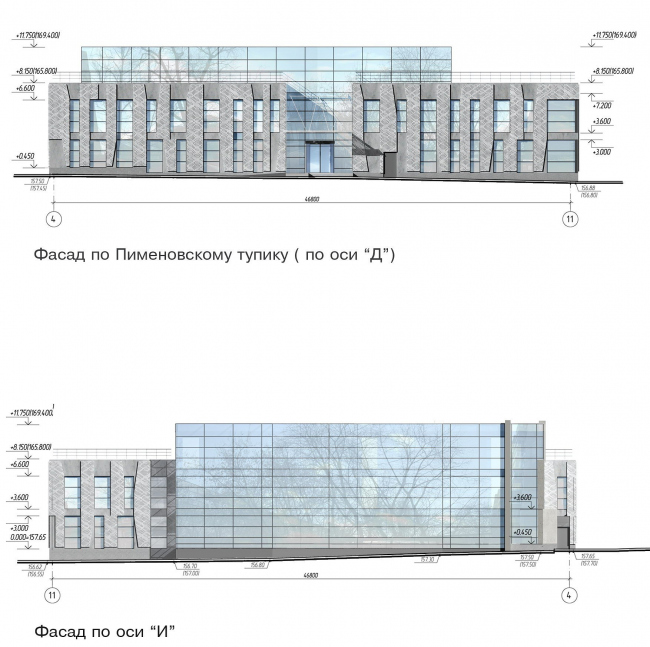